Hot chocolate with mummy and Navroze Mubarak to you 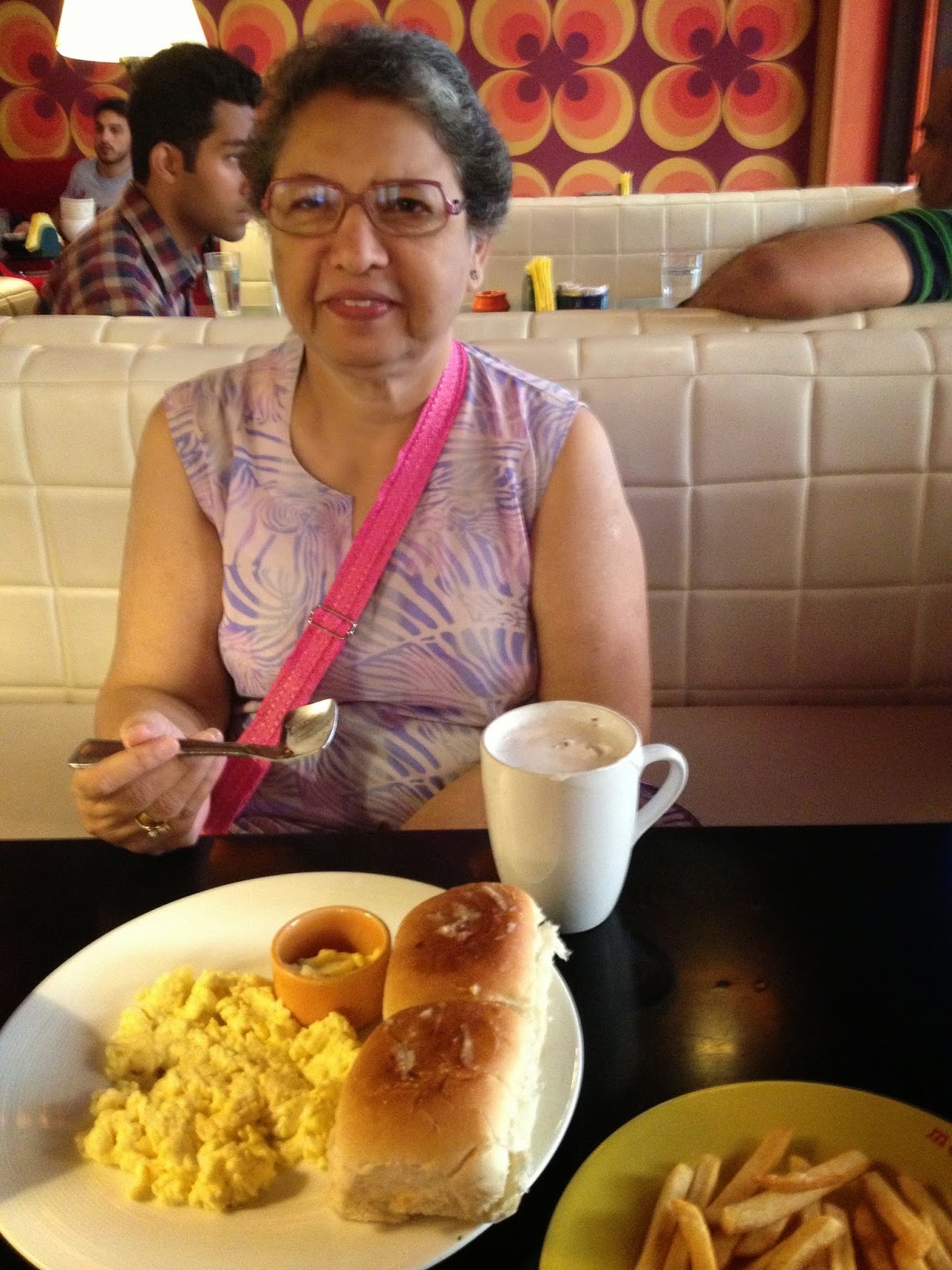 This is the first year since I got married into a Parsi family that we won’t be celebrating Navroze and that I don’t have a Navroze dinner to blog about.

Then again this has been a period where a pall of gloom descended over our family when my father in law passed away in November. This year Navoroze is more about fond and poignant remembrances than about celebrations.

Over the past few months we have tried to pick up the pieces. Death is after all

most cruel on those it leaves behind. My father in law’s passing away has of course been toughest on my mother in law and the void in her life can never be filled.

We have tried to spend more time with her for whatever it’s worth. She often comes over and spends her weekends with us. A short while to get away from the sheer physicality of memories that are there in her own house.

I am not the best person when it comes to emo talk and often in such situations words of consolation and hope just fall on deaf ears in any case.

So I do what comes naturally to me. I take mummy to coffee shops and cafes.  Usually K is with us. When the two of us are alone and K is at work I try to chat with mummy about other things.

Through our outings I discovered that mummy loves hot chocolate and cream. She has given up eating everything that Daddy used to like…fish, meat, ice creams, chocolates…hot chocolate is her only solitary pleasure as he was always an ice cream and chocolate man and wasn’t into hot chocolate.

In this post I thought I’ll share some of the food stories she shared with me over our hot chocolates and cappuccinos and these stories are intrinsically Parsi.

One morning mummy shocked me by telling me that she used to get a non-vegetarian Parsi dabba which had dhan dar patio and pulao dal and the works and which cost all of fifteen (yes) Rupees per month at work before she was married.

This seemed pretty insane even if one accounts for inflation so I asked her how.

She told me that before she was married she used to carry just a dry sabzi and roti for lunch as she used to take a bus and then a train for work and didn’t want the food to mess her clothes.

One day a Parsi colleague saw her lunch and asked why she was eating such a simple fare. On hearing about her problem he said that he got a Parsi dabba which came from Cushrow Baag and that he would ask the lady to send my mom in law one too.

And so her dabba started with all sort of Parsi goodies coming in every day. Suddenly lunch became something to look forward to.

At the end of the month she went to Cushrow Baug to pay the lady.

It turned out that my mom in law’s colleague was the son in law of the lady who sent the dabba.

“How can I charge you? You are like family.” said the dabba lady.

“I can’t continue if you don’t charge me.” said my mom in law.

They argued for a while till the impasse was broken.

And that’s how the token amount of Rs 15 a month was fixed.

One day my mom in law and I were talking about how Maharashtrians don’t eat fish in the rainy season. She then told me that the Parsis have a similar custom. Apparently they don’t eat mutton in something called the Boman Mahina (if I heard her right) according to the Parsi calendar.

She then told me that her father used to believe that there was a scientific reason behind each of these ancient beliefs. He gave the example of chalk rangolis which Parsis put on the floor outside the doors of their house and said that this was to keep insects aside.

She said that there was probably some such reason behind the mutton abstinence too.

I love the cavalier attitude which many Parsis have towards life which possibly lies behind their having this aura of being a happy go lucky clan.

One day at a café with mummy, like a good Bengali I was talking about things like cholesterol, blood sugar, blood pressure and acidity and the need to check these.

She looked at me and said it’s best not to know what’s happening inside one and then proceeded to tell me the story of a cousin of hers who used to live in Surat.

The cousin apparently had a terminal illness and came to Mumbai to get treated. The doctors gave up on the cousin and said the patient should be taken back home as they did not expect him (or her, I am not sure) to live for long.

“Let him eat whatever he likes, he doesn’t have many days left”, said the good doctor and no oats, egg whites or wheatgrass juice were talked about.

Well the cousin, who had been given a few days to live, came home and followed the doctor’s advice and ate everything.

“He lived for 25 more years” said my mom in law beaming.

In case you want to know her verdict on the hot chocolates of Bandra here it is.

According to Mummy, the hot chocolate at Starbucks Bandra is the best.

Sharing second spot are the hot chocolates at Mocha Mojo and Candies which she finds to taste the same and a tad sweet compared to the one at Starbucks.

What tips the scales in favour of Mocha Mojo over Candies is that the former, like the one at Starbucks, comes with whipped cream.

She absolutely loves whipped cream. K is often strict with her and exclaims in shock when mummy tries have all the whipped cream.

When K is not there, I look on like an indulgent grandfather as mummy finishes her whipped cream.

Happy Navroze to you too.
family festivals iPhone pics Parsi Parsi food - the better half People

Anonymous said…
Lovely piece Kalyan - I love the idea of you being the indulgent grandfather to your mother in law!
22 March 2014 at 07:40

Robyn said…
Really touching, Kalyan. You're a good son.
RE: the abstinence from mutton -- this is interesting. I looked at the Zoroastrian calendar and there is a period called "bahman" (closest thing to "boman" I could find) from June-July. Google turned up nothing about non-eating of mutton among Parsis during any particular time period. But I thought about this bec -- despite how we think of Turkey as a big lamb-eating country -- many Turks will not eat lamb after the end of May, bec they say it stinks. Probably no relation at all. Just a though.

Pinku said…
lovely post Knife....Navroz Mubark to all of you.....and a hug to aunty.

The Bride said…
Lovely post, and Navroz Mubarak to your family! I'm going to adopt the Parsi attitude and buy meself some chocolate right now :)
24 March 2014 at 11:16

Kalyan Karmakar said…
Thanks Robyn and thanks for the scouting. Given that Turkey celebrates Nowroz too i won't be surprised if there is a link
6 April 2014 at 22:07

Cubic Zirconia Olive said…
Thanks for sharing this wonderful post, It is awesome.
11 April 2014 at 10:35