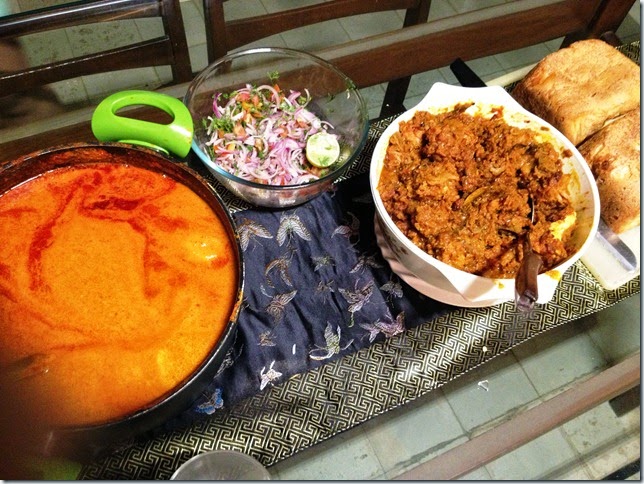 As I looked at some of my recent posts it almost seemed as if the blog had turned into a Parsi blog given the number of recent posts on Parsis and Parsi food.

Finely Chopped is of course not a Parsi blog and I am not Parsi. Just married to one. So my musings on Parsis are from an outsider’s perspective and are not the final words on the subject by far.

If you want to see a truly Parsi blog then look up Perzen Patel’s Bawi Bride.

From what I understand, Perzen took up cooking in earnest when she moved back to India from New Zealand and got married. Initially she would call her folks up for recipes. Her internet search for dedicated Parsi blogs came to nought though. Which is when she decided to chronicle her Parsi cooking experiences on a blog and thus the Bawi Bride was born.

Perzen belongs to the newer wave of Mumbai food bloggers. Hungry, active, out there, trying out new things, not afraid to experiment and has taken her love for food beyond the world of ether. So she has started her Parsi catering business. Does confectioneries and dips too and not necessarily just Parsi. She takes part in the new pop up markets which dot the city these days and takes up stands there where she gets sold out. She has held Parsi cooking classes. Created an online crowd sourced food e-book called Best Secrets which you can download here. Blogs and has a day job too.

We went to her house at Dadar recently when she invited a few of us bloggers for a Navroze dinner. K joined me as there were a few drop outs and Perzen told me that a spot had opened up. Anything for Parsi food said K and she came back very happy at the end of the evening.

We had a lovely time with Perzen and her husband turning out to be very warm hosts. I knew most of the others who were around and it was more like a relaxed an evening at a friend’s place. Such a pleasant change from the yawn inducing 5 star hosted blogger’s dinner I’d been to recently.

Perzen kicked off the evening with Parsi mutton mince kebabs which she had learnt to make from her grandpa. The recipe of which was one of the first posts that I had read on her blog. Parsi kebabs are similar to what would be known as koftas amongst the Muslims and are spiced meatballs fried in and egg and bread crumb/ semolina batter. The kebabs were a hit and finished off in a jiffy. K, the other Bawi around, gave her vote of approval. Here’s the recipe. 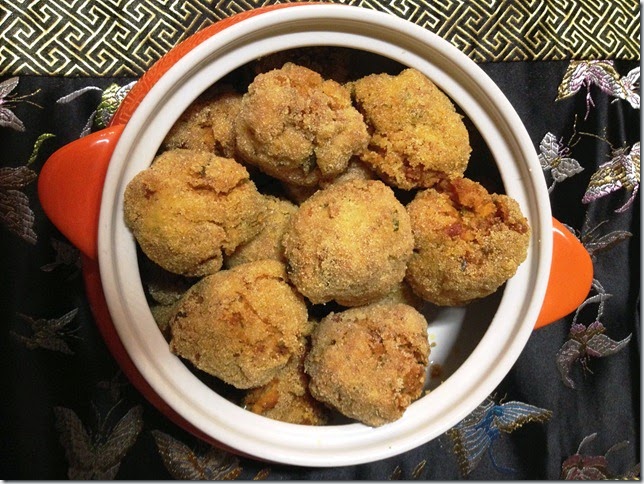 For her mains Perzen said she wanted to go beyond the usual dhansak or Pulao daal which one expects in Parsi feasts and went for her granny’s prawn curry. The red curry had a beautiful balance of the flavours of the prawn and the coconut and tasted lovely with steamed rice. The Parsis are quite manic about their curries. I remember asking K what she had for Sunday lunch at her parent’s when we were dating and she would say ‘curry”. I would ask ‘what curry’ and she would say ‘just curry’. For Parsis curry is as much about, if not more, about the sauce than the protein. As I had the curry rice at Perzen’s I knew that my mom in law would absolutely love it. You will find the recipe here. 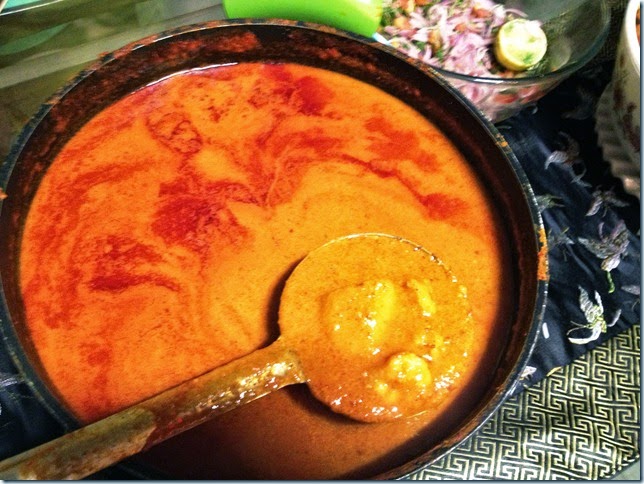 The other main was sali gosht. The mutton was soft, fall of the bone and the thick curry base a mixture of sweet, tart and salt. Perzen explained that sali gosht is when the mutton is cooked on the bone versus the more commonly known sali boti where the meat is boneless. The rest of the recipe is the same though and as we all agreed, mutton tastes so much better on the bone than without. Here’s her recipe for sali boti. 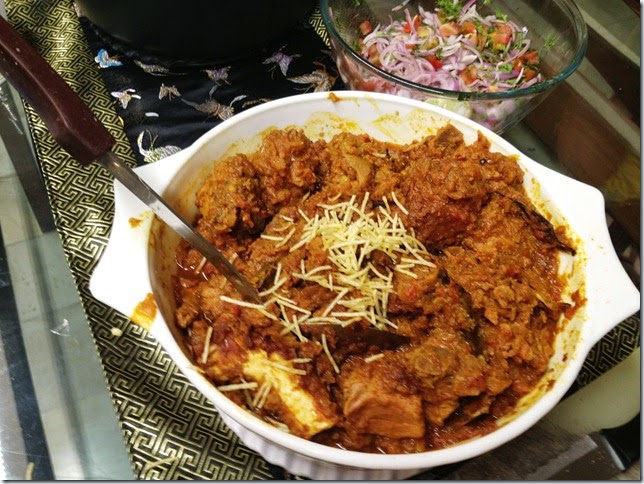 For desserts we had a fantastic laganu custard that K just loved and for whatever it’s worth I am pasting the recipe here in case she ever reads this and wants to make her own. As I looked up the recipe I saw that Perzen credits it to Katy Dalal and now I know why K loves it so much. She and her dad both loved it when Kurush (Katy’s son) sent it over to our place. Perzen had replicated it well it seems. 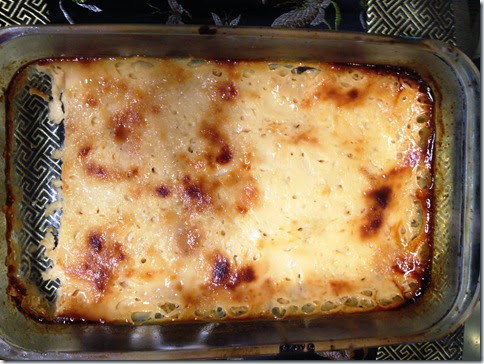 Perzen also made a laganu custard ice cream. An experiment of hers. This was quite popular that evening amongst all including K. I didn’t get much of the custard flavour but loved the creaminess of the home made ice cream. Here’s her recipe. Like a good blogger, Perzen believes in sharing and, as we earlier saw, crediting.

The surprise of the evening for me was the kopra paak. It’s a coconut based dish and had a lurid pink colour. Neither of which made it appealing to me. I tentatively took a bite. I couldn’t stop. Here’s the recipe of a rare coconut dessert that I liked. 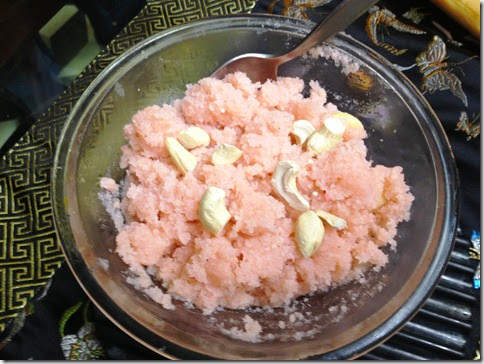 The jury is divided on whether a young Parsi bride who learnt cooking late in life from cook books and international calls can justify being a chronicler of Parsi dishes.

Well that’s the thing about the blogosphere. It is a great leveller. It gives everyone a voice. Whether you will be heard depends on whether you can connect with your readers.

What folks like Perzen of Bawi Bride or Sandeepa of Bong Mom’s Cookbook are doing is deconstructing and adapting ethnic Indian cooking and making sure that they live on in modern times.

Note: We were hosted at this dinner by Perzen and have known her for a while 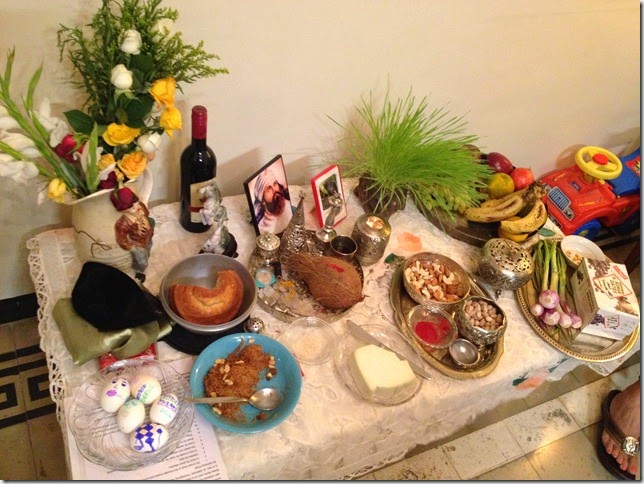 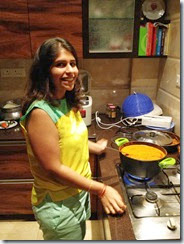 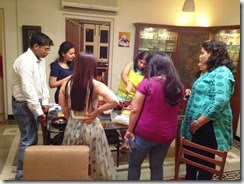 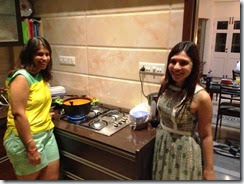 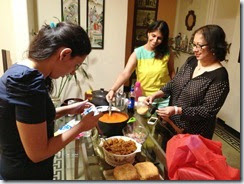 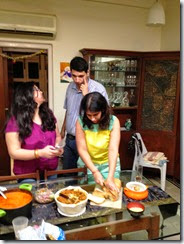 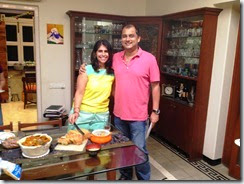 sasha said…
Hi Kalyan, your blog is always a great source of food inspiration and I always pick up tips on what's going on in the city of mumbai each time I visit.I do feel however that as a food blogger, you probably get better service than the rest of us. I ordered kurush dalals' food from Katy's kitchen and though the food was good, I was overcharged for delivery fees. I called thrice to follow up about a refund and emailed as well with no follow up on his side. Even though he admitted I was over-charged, he never bothered to return the money. He was extremely prompt and responsive only when I placed the order. It left a bad taste in my mouth and I was surprised about the lack of professionalism. Just wanted to leave feedback! I think it is important that positive and negative reviews find their place in the blogosphere for people like me who love trying out new food services. Thanks! Sasha
3 July 2014 at 17:55

Kalyan Karmakar said…
Sasha, thanks for your comments. Have passed on the feedback
4 July 2014 at 11:54

Kurush F Dalal said…
Kalyan... Sasha was not overcharged. I made a mistake in totalling her bill prior to the order as I was outside my office. I informed her of the same. Told her I'd be happy to refund the Rs 100/- if she so desired. I also told her this would happen when I next had an order in her vicinity. She then informed me she was out of the city and I have been waiting for her to get back to me. I wish she had called instead of posting this here.
4 July 2014 at 13:13

Sasha said…
Hi kurush, unfortunately I have a very different version of things that happened. You seem to have forgotten that even though I was out of town, I mentioned that my parents would accept it on my behalf. I posted here since there was no refund after 3 phonecalls, one Facebook message and an email to you. I waited an entire month for you to revert before I posted here. Anyway like I said it was a paltry amount, I was following this up as a matter of principle. This is just feedback and should be taken as such. Thank you.
27 July 2014 at 04:39