While talking about Sneha, the Keralite place at Mahim, Kurush told me “it’s the sort of place the old Kalyan would go to”.

“What do you mean by the ‘old’ Kalyan” I asked him.

“You know, the one who used to go to grunge eateries. The new Kalyan goes to places like The Drawing Room (the private club of Smokehouse Deli) and all”.

Well Kurush did have a point. A lingering acidity attack last year coupled with being in the suburbs far away from the old eateries of South Mumbai meant that my grunge eating days had become fairly scanty if not non-existent.

I decided to fix things by heading to Mahim to eat with some of my friends, the Finely Chopped Knights. As K said this too was something I was doing after a while. When I started the Finely Chopped Walks, the idea was to simulate outings with friends. However, the original outings with friends had become pretty rare for whatever reason. A few nights back I remedied that as I headed out with Soumik, Bonnie, Jit and Suprio to Mahim.

Our first stop was Sneha.

Sneha is a place I had heard about for quite a while. It’s a non-descript, non-air-conditioned place, quite easy to miss. It is opposite the Paradise Cinema at Mahim. It is divided into two sections. There is no difference between either section as far as I could see. The seating is functional. Sun mica clad tables with chairs that sat four per table, tightly squeezed. Section 1 was packed and we were seated in section 2 and more people were seated there while we ate. The place shut early. 1030ish I think 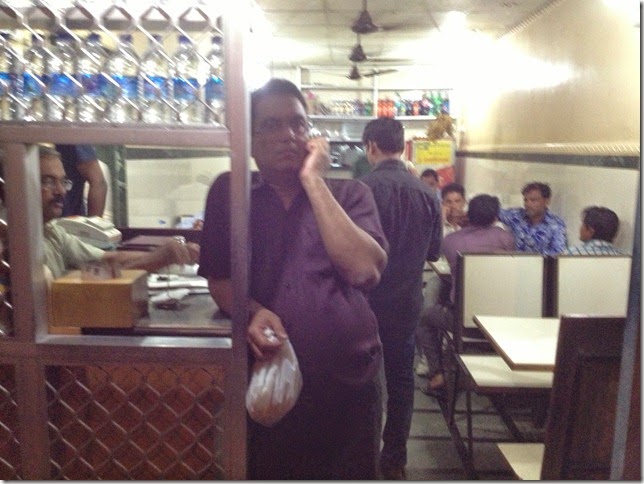 As I later realised when I posted pictures on Facebook, the biryani at Sneha comes highly recommended. However, we were five Bengalis and planned to have Calcutta biryani later in the evening at Lazeez (more about that in another post). Keralite biryani wouldn’t work for us. I saw some folks eating veg thalis in the restaurant. 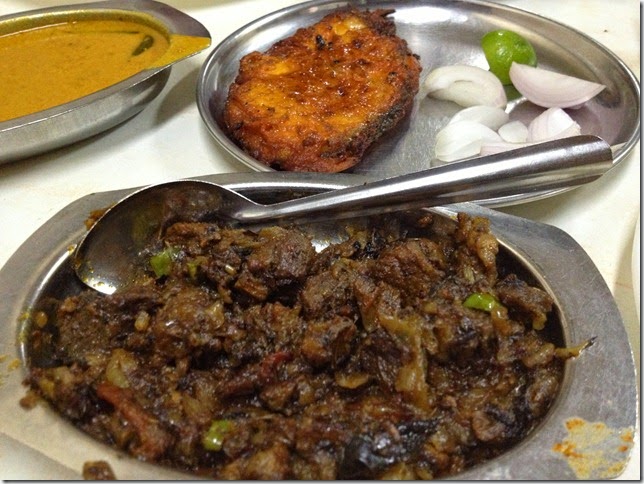 We ordered Keralite porotas which were nice and sweet and had a pleasant soft bite.

With that we went for the beef fry. At Sneha they specify ‘beef’ on the menu unlike Deluxe in town which just writes ‘mutton’ and serves beef if you ask for it.

The beef fry at Sneha turned out to be one of those life defining dishes that unheralded places often stun you with. The meat is chubby. Once you went past the meat you taste the sweetness of the caramelised onions. The next taste to hit you are the deep lingering heaty notes of pepper that alleviate and not enshroud the meat. At the end you bite on a curry leaf to bring the Keralite opera to a grand finale.

One of the best dishes to be had in Mumbai for your money’s worth.

While the plan was to eat beef fry and porota, Bonnie and Jit had ordered surmai fry too. This turned out to be a pleasant surprise. The fish had a light batter coating which meant that the full and fresh flavours of the fish hit you in their glory. A group of fresh water fish loving Bengalis doffed their hats in respect to this wonder of the sea, it was so well prepared at Sneha.

Sneha once again is not a ‘find’. It’s been there for ages. If only we had the time to go spare from our jaunts at the latest European restaurant opening one be one in Mumbai to seek these places out.

I had once written that Mumbai could be to Indian cuisine what a Sydney or a London is to world cuisine. With the immigrant culture that we have there is no reason why we don’t have a rich diversity of Indian cuisines here.

Encouraging places like Sneha would be a start to inspire others to rush in.

Manju Modiyani said…
Oh! My room-mate once mentioned some restaurant across the street that offers beef but it's off the menu. I guess she was talking abt this place.
8 July 2014 at 01:26