Ling’s Pavilion at Colaba has spoilt me for all other Chinese restaurants in the city.

It’s our favourite restaurant by far. Apart from Bhojohori Manna, it is the only restaurant  that we don’t mind travelling to in Mumbai to eat.

Recently we found a close substitute to Ling’s in our backyard. Well Royal China can’t really be classified as a ‘find’. It’s been in Bandra for more than 6 or 7 years at least. We had gone there in the early days of my blogging and as I revisited the post I had written then I realise that I had quite liked it then.This was in the pre-Ling’s days. For some reason we hadn’t gone back there for a while. Possibly because we found it expensive. We’d gone there a year or so back but I was in a lousy mood that night and we both found the food over-rated. We went to Royal China a couple of weekends back and came back chuffed, reasonably bowled over. Here’s what we ate.

We started with some mushrooms buns which the flavour of the pork buns of Ling’s and there was some vegetarian starter for our vegetarian friend. I don’t remember what it was but it tasted good. 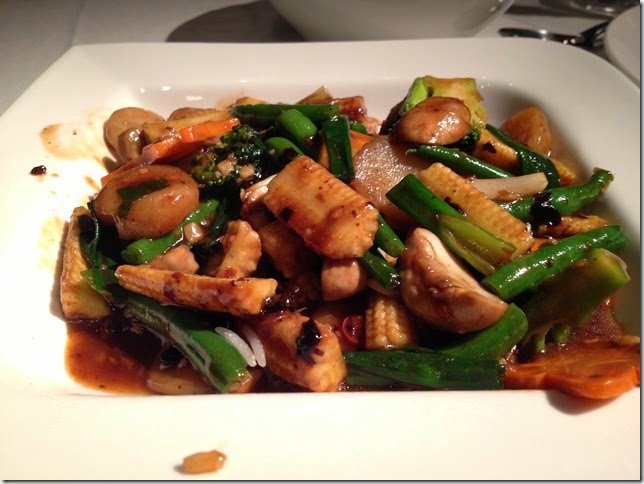 We then had an asparagus rolled in beef which was a showstopper. A stick of asparagus rolled in a juicy, tender, moist, very sinfully carnal sheet of sheek kebab-like beef mince with a slightly sweet Oriental taste with the crunch of the asparagus giving a counterpoint to the pliancy of the meat. 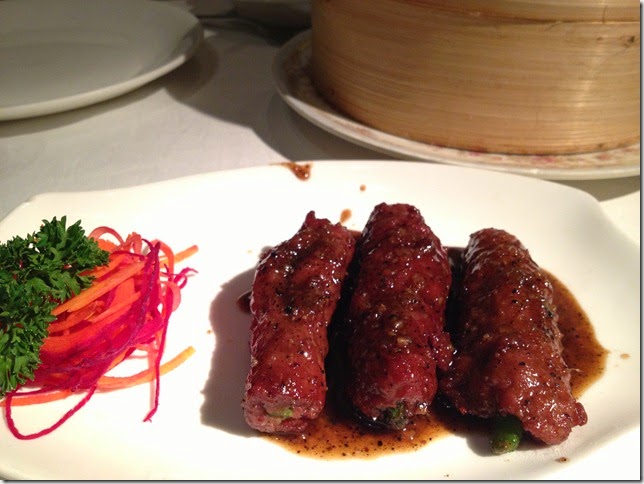 Royal China is famous for its dim sums and we went for the seafood dim sums. These were clearly the best dim sums I have had in my life. The dim sums sheet was diaphanous, silk – route worthy and encased in it were generous bites of bouncy sea food bits that exploded in your mouth like Chinese fireworks in their full glory…the dim sums were not spicy though in case the fireworks analogy threw you off track…the fieriness coming from the garlic chilli oil that crowned the seafood princesses. 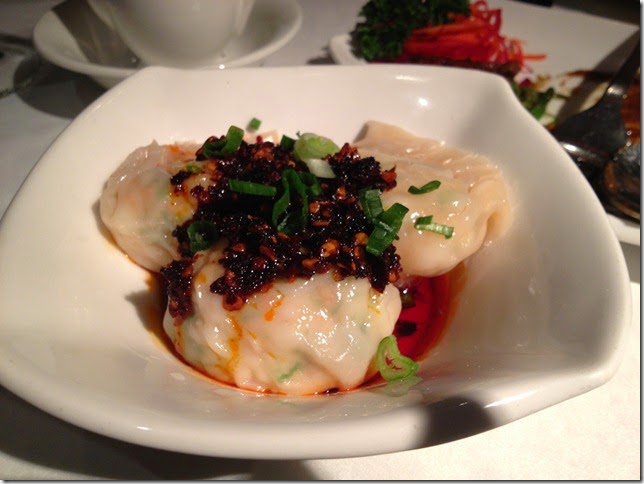 For our mains we had prawns in chilli oil.  Again very fresh prawns, so fresh that you felt that they had come to your table after a swim in the sea. Lovingly enrobed in a layer of piquant chilli oil with the condiments elevating the prawns rather than suffocating them like the saucy sides at Ming Yang. 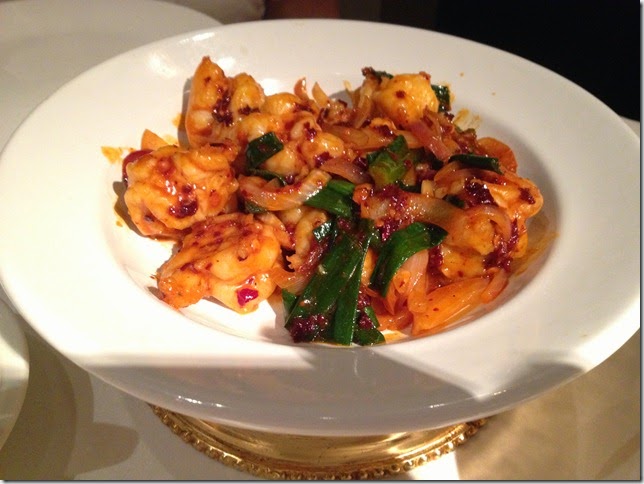 I don’t remember what was the mains that our vegetarian friend ordered but he ordered a garlic rice to go with it. The rice was a revelation as a for a change, again unlike Ming yang, you could actually taste the garlic in the rice. 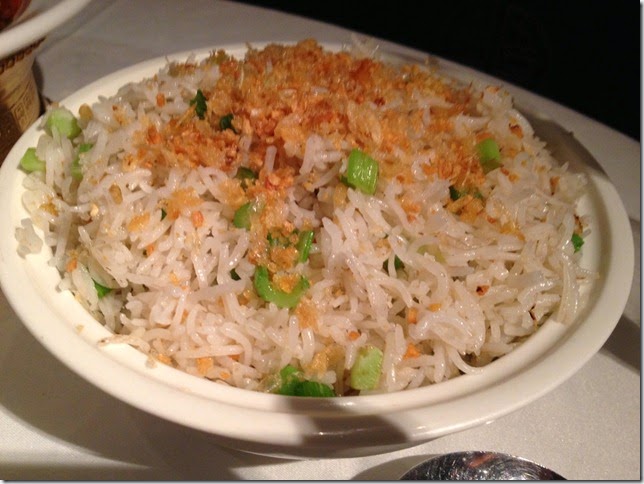 The other mains that we went for was the salt and pepper ribs which, as I read the post I had written, I realised we had ordered the first time too. The pork was very baby butt tender with the bits of pepper giving it a nice hit. The flavour palate had a slight Indian touch to it. The pepper perhaps. 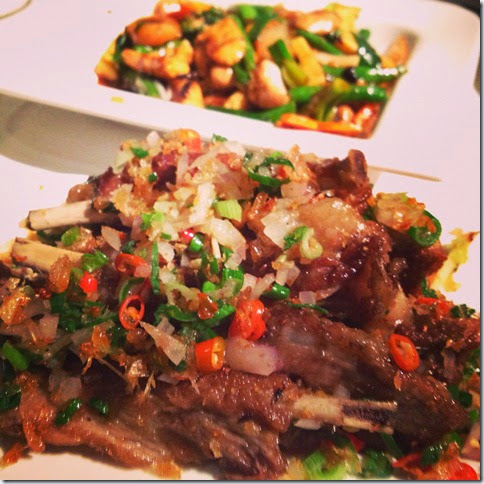 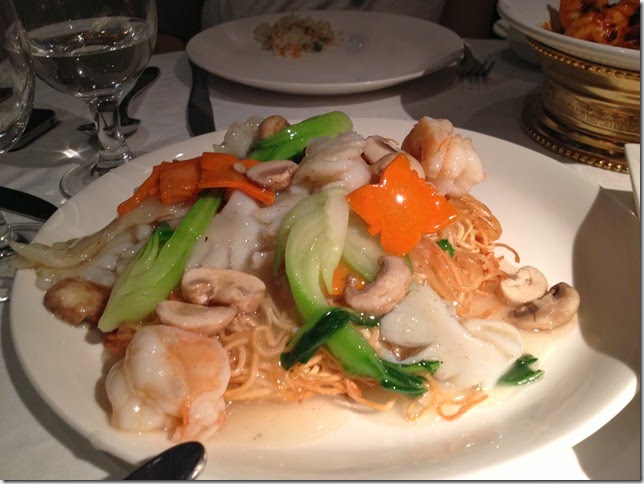 For dessert we had a chocolate pastry which doubled up as a birthday cake and custard filled fried buns which had a very Singapore moon cake refrain to it. 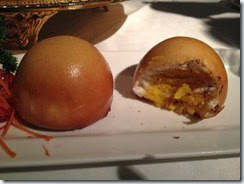 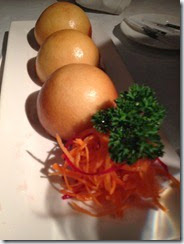 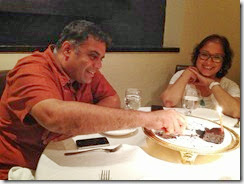 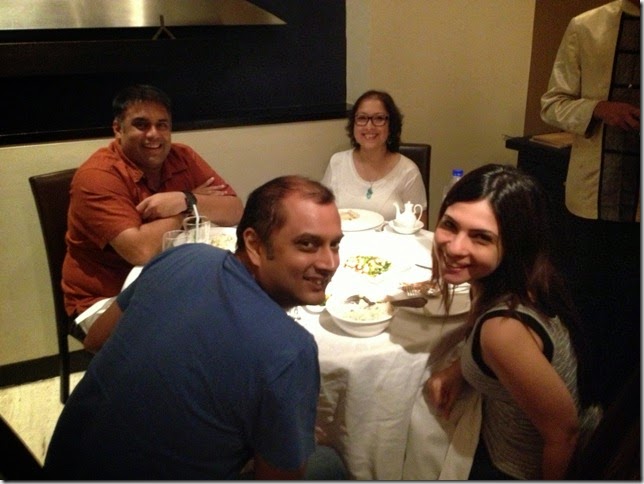 So would this mean the end of our drives to Ling’s?

Well a few afternoons later K and I went to Ling’s for lunch. Baba Ling wasn’t there. Perhaps because we had reached late close to closing hours. At the end as were paying the bills the waiter came with two bowls of ice cream for us.

“For you sir because you are Baba’s friend'”.

Now how do you beat that?

Kalyan said…
Hey TD, thanks. Not been to the fort one yet. Trying to bring in some discipline in my writing for the book so would have to cut down a bit on the blog I guess