Indigo 15 at 15 and wishing them many happy returns of the day, Colaba, Mumbai

I had never been to Indigo before.

It fell in the range of expensive restaurants when we used to hang around in Colaba. And now we always go to Ling’s when we go to Colaba. We do go to Indigo Deli at Bandra and Palladium occasionally but never to Indigo before this.

A few days back I got an invite to attend the 15th anniversary celebrations at Indigo and decided to drive to town for it. It promised a 15 course menu featuring their popular dishes over the years. A good way to get to gauge what Indigo is all about. I was a bit apprehensive about whether I had the stomach to go through 15 courses. At the end I did and there was not a single wrote note in what was served. Last time I had a tasting menu like this was at Arola’s at Barcelona and I felt violently ill after that. No such problems here at Indigo even though the scallops were in common in both menus.

I was interested to see how the service would fare in Indigo as serving a 15 course menu is no jokes. Rest of the folks around were paying customer so this was not a media special event. Therefore what one experienced was fairly real life. I was there for the first seating at 7.30 pm and the food came out like clockwork till 9 pm. There was no mis-step in the service toward the beginning except once a baby beet salad came out instead of the scallops but later I got my scallops once I pointed it out to Chef Rahul Akerkar who had come out say hello. The service became a bit awry when more people came in at 9 pm. My fish was served to the lady who had just joined my table and she had to start her meal with a mains instead of the soup. I had to wait a while for my last course but I enjoyed having someone to chat with after sitting alone at the table for the better part of an hour and a half. My three desserts were brought at one go instead of sequentially but overall I think the staff did well. They didn’t know what was being served from the kitchen but I used the detailed menu card to navigate my way.

Take a look at the menu and dishes (in order of mention on the menu). 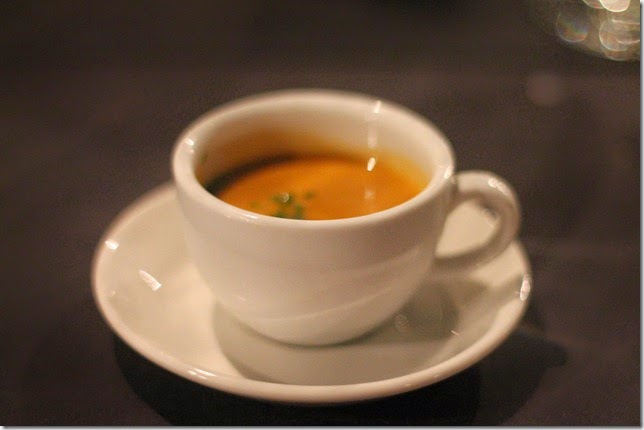 The lobster bisque, I learnt, is a classic here and was one of the standout dishes of the night for me. The flavours of the lobster hit you with a resounding whoosh with every sip 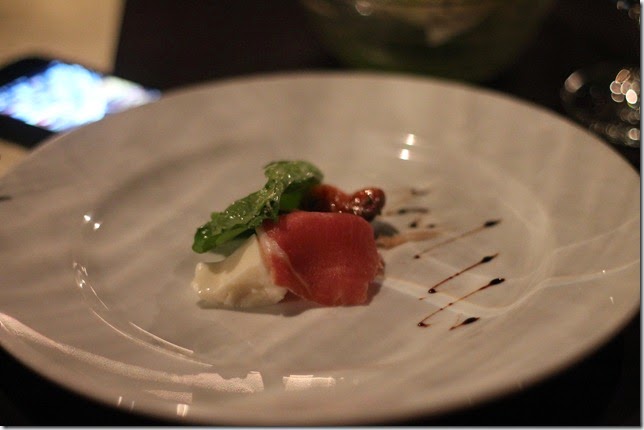 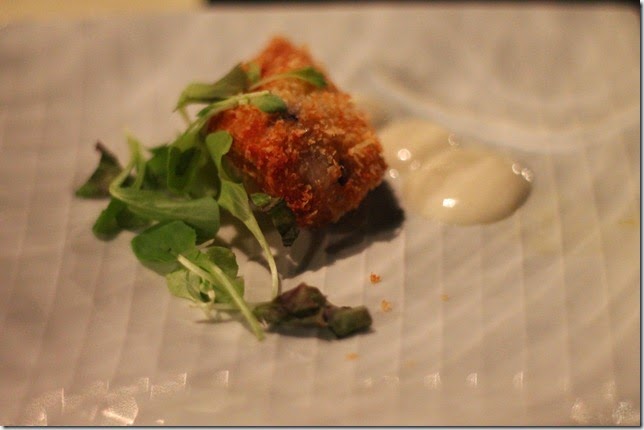 What can one say about chicken wings baked just right with parmesan and served with an enticing blue cheese dip? This is the dish that defines hedonism for me that night 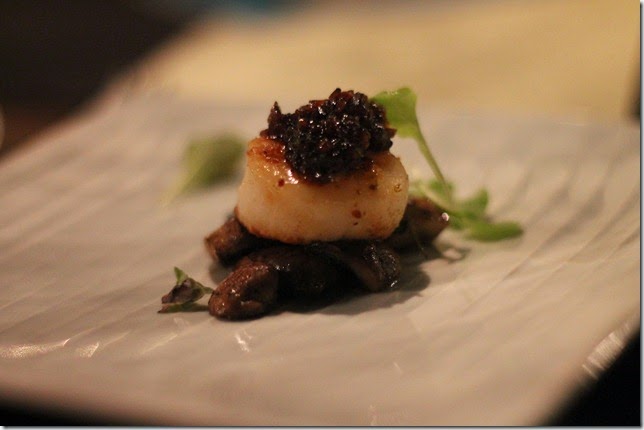 The scallops were worth the wait. Cooked just right, my knife cut through it with ease, each bite was translucent and not chewy, the robustness of the bacon jam a counterpoint to the delicate meat and the warm mushroom salad giving it a great base, possibly the dish where the various notes came together best that evening. 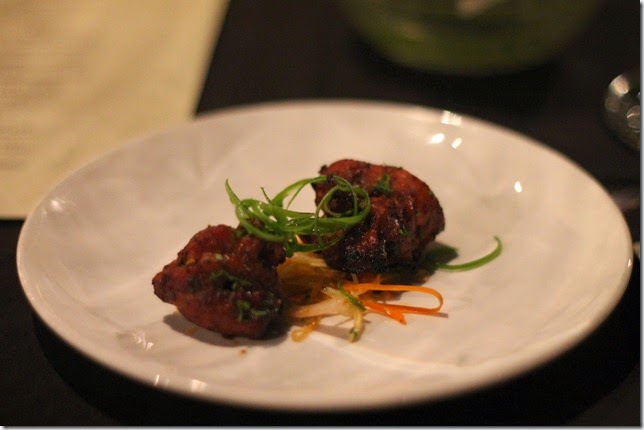 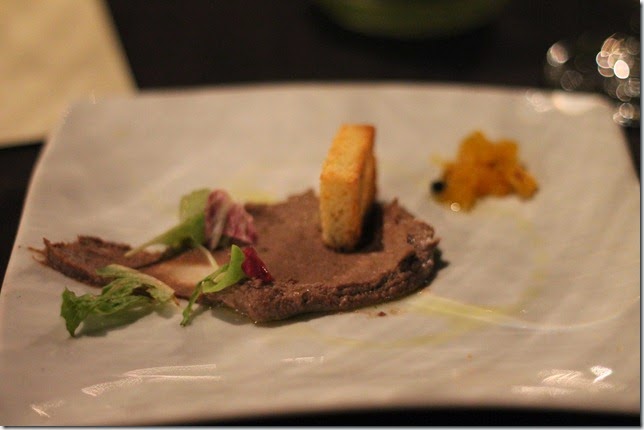 The duck liver pate was quite sensual and the sweet pumpkin pate gave an interesting contrast. Didn’t much care for the soft brioche and would have appreciated a more crisp melba 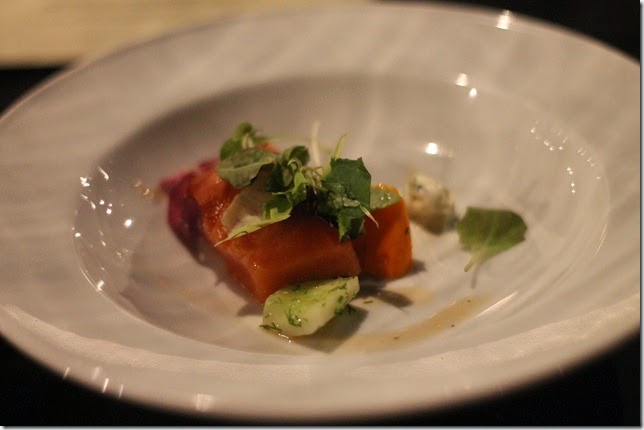 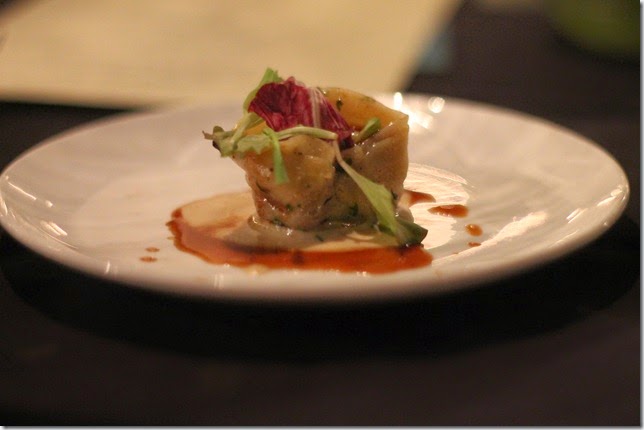 I honestly didn’t care much for the lamb fagotteni, fond the pasta chewy and the lamb rather monochromatic in its taste 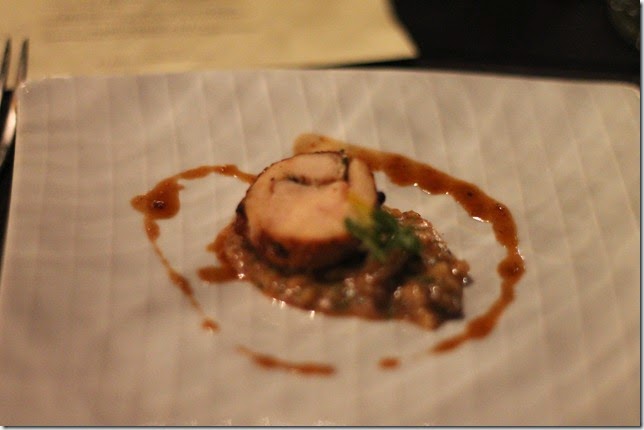 The butter poached chicken was tender but uninteresting but the wild mushroom risotto with foie gras jus was quite a blockbuster and very robust in flavour. Pardon the picture, poor light plus trying to get a hang of the 50 mm lens 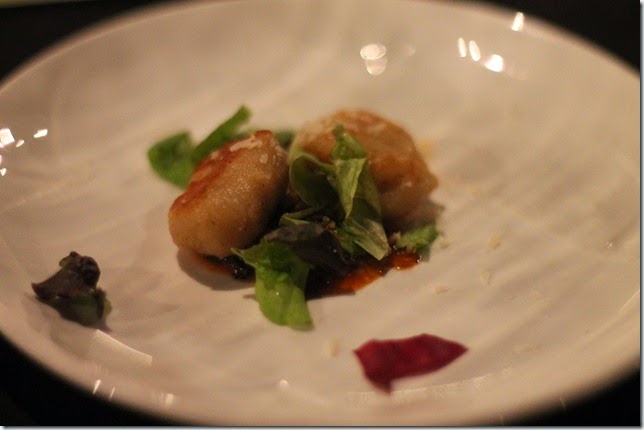 I have rarely had a gnocchi which has excited me & the semolina gnocchi at Indigo didn’t change this. The duck ragout was flavoursome though and had a slightly sweet taste 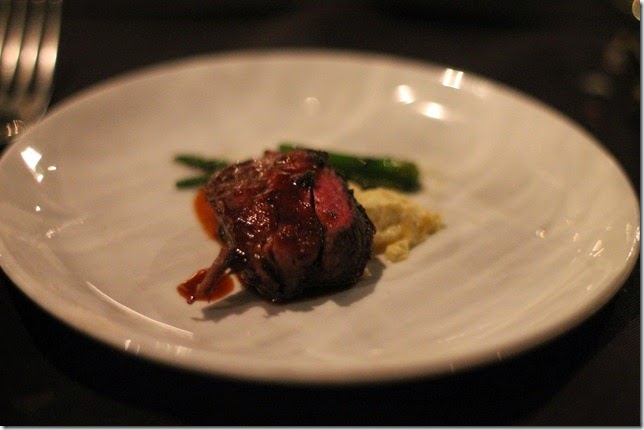 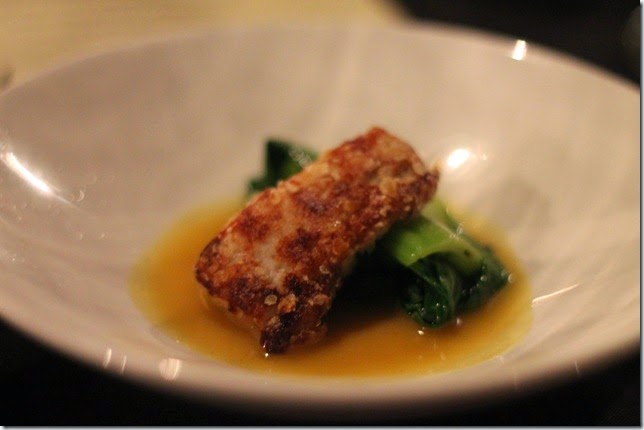 The rawas was brought in after a long time but was worth the wait. The fish was cooked perfectly and was very juicy and combined brilliantly with the sweet and sour mango sauce and the slight bitter bites of bokchoy taking us to the Orient rather smoothly from the West to end the meal.

I had to wait a while for the desserts and they were brought to me together. I ate them in the sequence suggested by the menu card though. 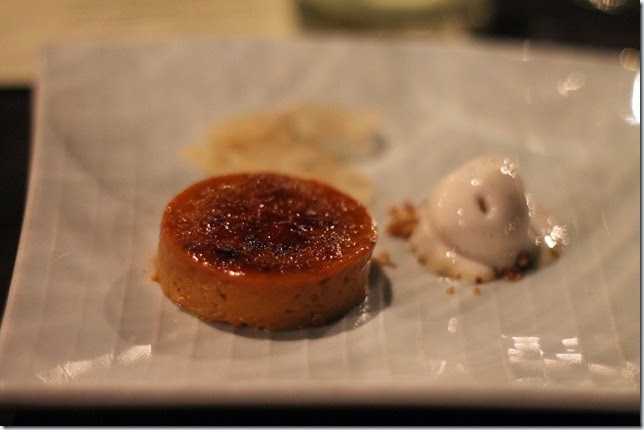 The salted caramel brulee with banana ice cream was too sweat and I am glad it was just a tasting portion. Would have been nice if there was a bit more salt as I liked the sea-salted bites 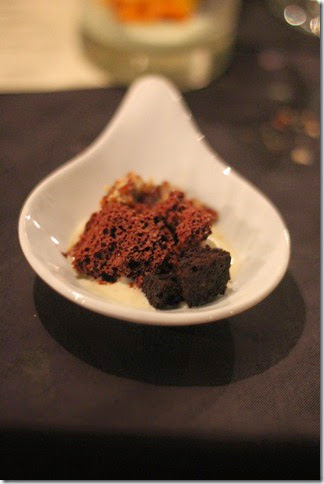 Had immediately after the overly sweet creme brulee meant that the dark chocolate coral was just one bitter blur. This is where the service messed it up by not serving the dish after a gap or without a palate cleanser in between 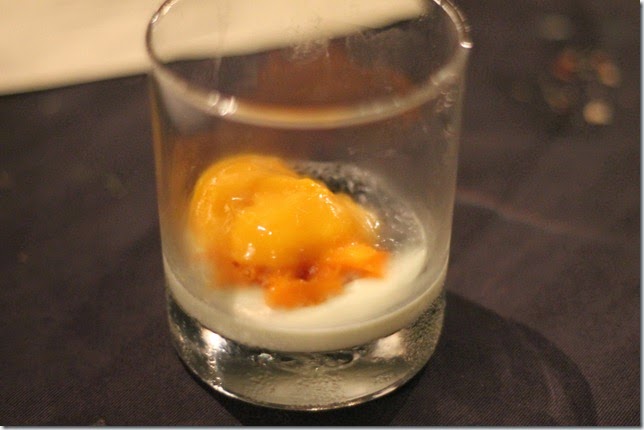 The basil panacotta with the Alfonso sorbet was the standout dessert by far for me that evening. refreshing, cool, seasonal, right mix of sweet and tart, just what I needed that grimy evening on the terrace.

The anniversary dinner comes at a steal of Rs 1500 plus taxes and tonight would be there last serving. When K heard what was on offer she wished she’d come with me and she didn’t mind paying for it too given the prices.

Even if you can’t make it to the anniversary dinner this will give you a good idea on what’s on offer at the Indigo in Colaba (down the Leopold lane).

Congrats Chef Rahul Akerkar and team on fifteen years of getting world class cuisine to India and here’s wishing you guys many happy returns of the day. 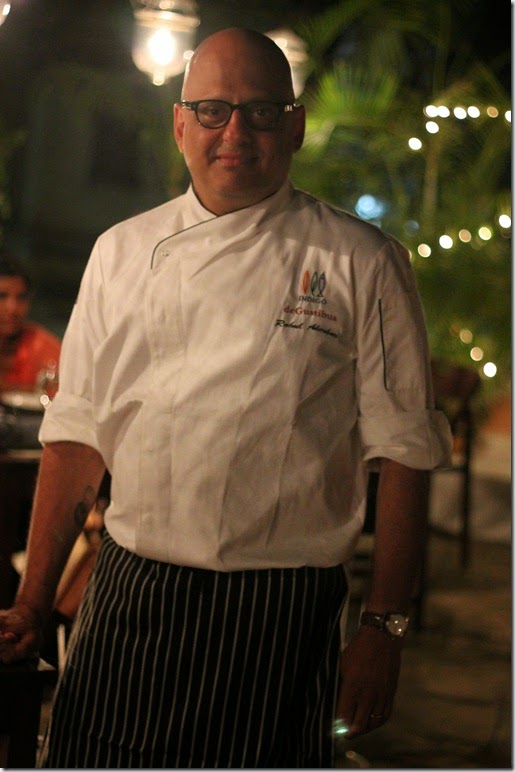 Anonymous said…
As a student, fine dining is happily out of my reach for a few years yet. But for general future interest, are portions usually this minuscule?
20 April 2014 at 19:29

Kalyan Karmakar said…
Anon, i get where you are coming from on the costs. The miniscule portions are because it is a tasting menu
21 April 2014 at 15:38