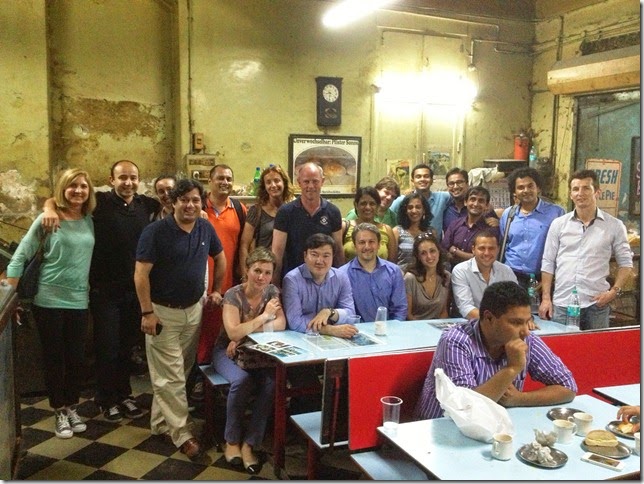 If you love Mumbai she loves you back and nowhere is there more true than at Fort.

A few days back I did a walk at Fort. There were many firsts in it. It was the first time that I was doing a corporate walk. It was for P&G, the multinational giant who had a group of executives flying in from across the world…Morocco, France, Belgium, Kazakhstan, Turkey, Jordan, Egypt, Singapore. Vidya from their local India office, who had come on a couple of Finely Chopped Mumbai Food Walks earlier thought that a walk would be a good thing to include in the India cultural sensitivity programme planned for the group of people where the idea was to give them a feel of Mumbai beyond that of the airport their hotel and their office.

The group consisted of around 20 people The biggest group that I have done so far at one go. I was nervous about whether I would be able to handle so many folks together. As I went to the walk and voiced my apprehensions on twitter and Facebook, well wishers got back wishing me ‘have fun’. Made me reflect about how no one had wished me that when I used to make client presentations in research. ‘All the best’, at the most. Never 'have fun’. Well, that’s exactly what I planned to do.

It was also the first time I was doing an evening walk in Fort. Fort is no longer the CBD of Mumbai and the city’s nerve centre has shifted to the North. Which means that Fort is pretty much a ghost town in the evening with most places shutting down by 7 pm at the most. The group arrived at 7.30 pm post work all the way from Andheri E. Planning for it was a bit of a nightmare but it all fell into place.

I went into the narrow lane past Ideal corner to Suresh’s bhajiya stall before the group arrived. Requested them to stay open around 8 pm. The other places I checked were a bit discouraging. Moti Lassi shut by 8 pm (too late for a second stop after bhajiyas) and Yazdani by 7 pm (they wouldn’t even reach by then). My only hope was Jimmy Boy where I had called the previous day and booked bhonus. That too became a problem with the group reaching late as Jimmy Boy had suddenly got a huge breakfast order and wanted to shut early to work on those. I was literally and figuratively living on a prayer as I sat at Starbucks and had a Java Chip Frappuccino and cooled my heels and waited for the group to reach. 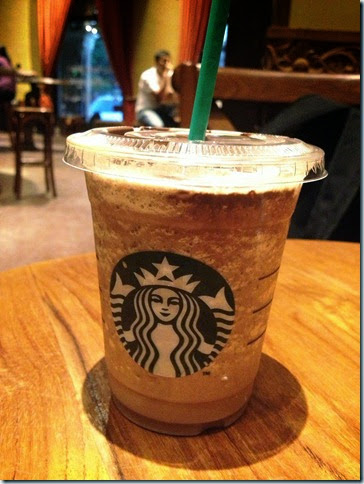 The group arrived at 7.30ish in lots after the initial scheduled time of 7 pm. The Bombay Store, where I planned to start the walk, had shut down for the day so we stood outside the shop as I welcomed the participants from across the world and briefed them on what lay ahead and about the significance of Fort and how it was different from Chakala where the P&G office is based.

We then headed out past the Parsi agiary and then Ideal Corner to Suresh’s bhajiyas for Mumbai’s iconic vada pao. Quite a few from the group overcame their fear of spice and tried these. Felt good to see from folks from across the world enjoy the Tendulkar of Mumbai’s street food. 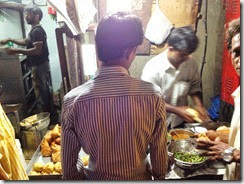 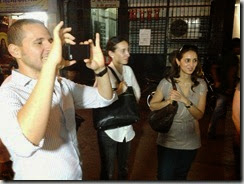 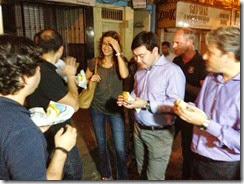 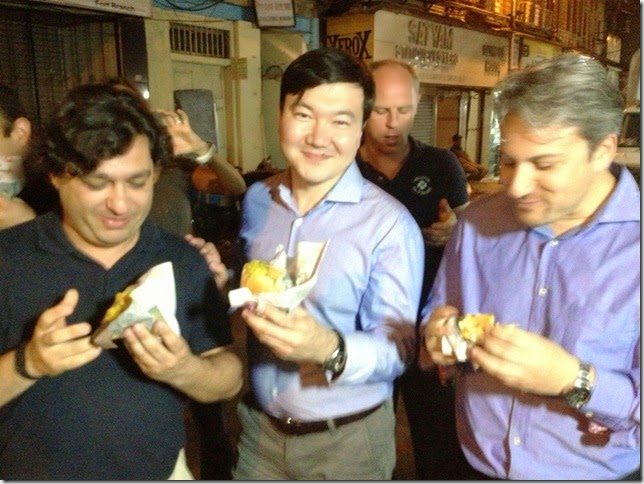 We then headed towards Horniman Circle after checking retail displays in small corner shops and sari shops and went past Yazdani. I took a chance and popped in and saw that the last customers were still inside though they had closed down. I requested Zend uncle to let us in and and after much coaxing convinced the karigar to make us Irani chai which we had with bun maska, mava cake, khari and ginger biscuits. Zend uncle even allowed us to go in and see the bakery. I frankly had no hopes of giving the group a Yazdani experience at this late hour and felt really grateful that we could. 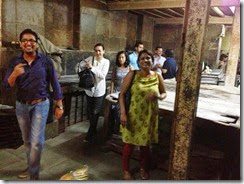 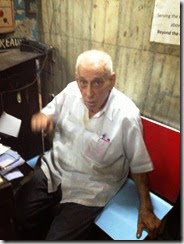 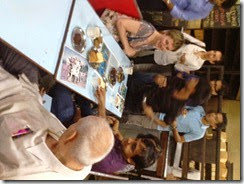 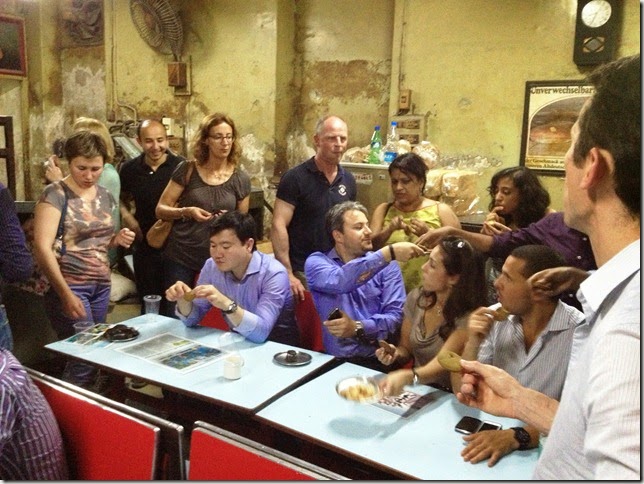 We then headed to Horniman Circle and Jimmy Boy while I got panic calls from Sherzad of Jimmy Boy asking me whether we will be late. We were seated in the upstairs air-conditioned section of Jimmy Boy, all twenty of us, divided into veg and non veg groups. The staff, despite the time pressure and the large numbers served us warmly and adroitly. The menu was sarya, lagan nu achar and then patrani machhi, sali chicken and muton pulao daal with lagan nu custard for non veg and Parsi vegetables with cashew and veg pulao daal with coolfi for vegetarians and of course raspberry for all. They arranged for the goody bags too. Mava cake for non veg and date and walnut slice for veg. The folks at P&G I was told had been eating gingerly through the trip as they were afraid of spices and yet the food at Jimmy Boy was wiped clean. And frankly I owe a lot to Sherzad and his team to help me manage such a big group of people. 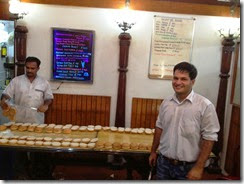 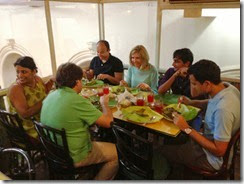 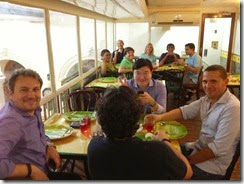 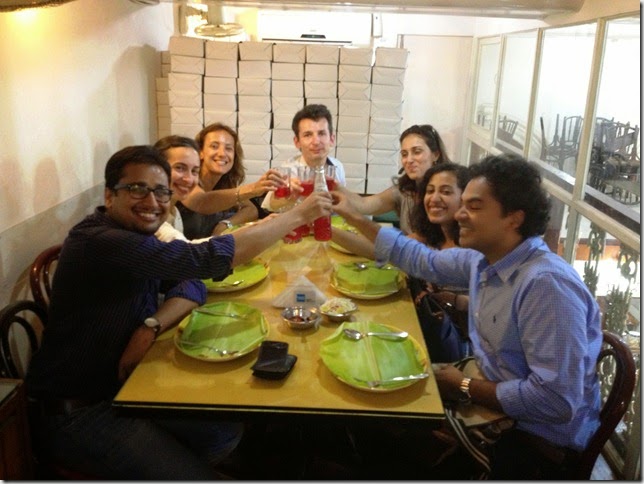 As far as whether the group of 20 odd people were well looked after, well as Vidya, who organised the walk texted me “Everyone thoroughly enjoyed themselves. Thank you so much”.

As did I. After all I love introducing people to my city.

Yes, I did have fun. 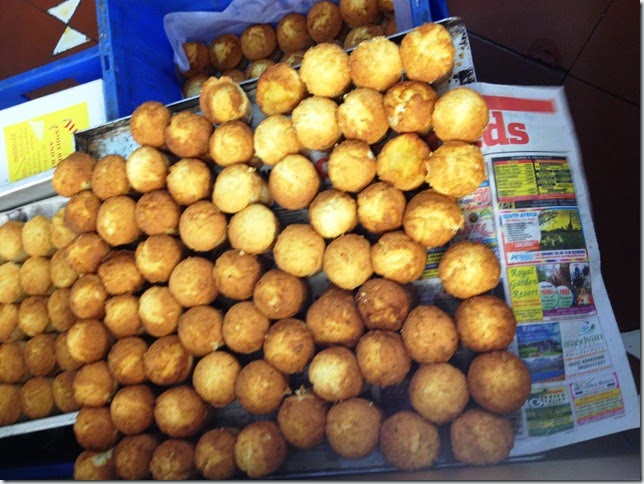 Mumbai Photographer said…
An evening walk is the only way to avoid the sweltering summer heat in Mumbai. Nice one!
26 May 2014 at 13:46