When half baked is rather raw…Fat Mans Cafe, Bandra 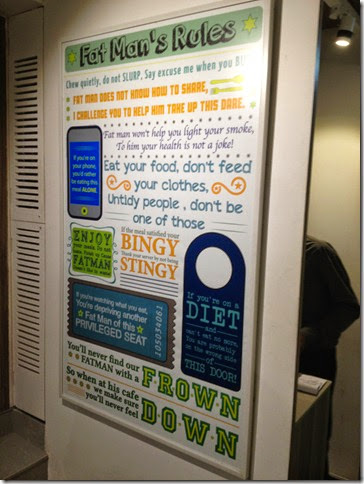 Whenever I meet people they ask me ‘so what’s new in town’.

This got me thinking a few days back. I normally stick to our favourites like Ling’s, Candies, Bhojohori, Smokehouse and Saltwater while eating out in Mumbai. Most of the ‘new’ places I try out are at least fifty years old. I rarely go to new restaurants opening in town. They don’t interest me. I feel too lazy to travel. Loads of bloggers write about these but bloggers events organised by PR agencies don’t interest me as they offer an experience which is not what real customers get to experience.

I wondered whether I was losing out by not writing about new places. Maybe I should. So when I read about Fat Mans Cafe on twitter, saw it was well recommended by some tweeps I follow, that someone whom I follow on twitter, is the consulting chef and, most importantly, that it is in Bandra, I decided to drop in and check out the fare.

My mom, K and I went there on Saturday evening.

Fat Mans Cafe is on the Candies Bandra Reclamation lane near Chez Moi. I parked on the main road opposite Lilavati. The cafe is small. About 5 or 6 tables and is air conditioned. The decor a mix of stark white walls and a bit of turquoise blue with the odd poster. Some of the tables had wooded benches which my mom felt would be uncomfortable and like train seats so we went to the corner table which was a bit like a sofa. It was 7.30 pm and fairly full.

We placed our order for a lamb slider which Bhakti, their consulting chef, had recommended to me, cottage cheese burger for mom who wanted something vegetarian and a Nutella shake. The menu is fairly extensive and has mains and breakfast items and desserts too. Pizzas are on the menu but not on offer yet.

About half an hour passed and it was 8 pm and there was no food on the table or even water. We were hungry and antsy.

I went up to the young gentleman, possibly the owner, and asked where our food was. Turned out that the waiter hadn’t told the kitchen about our order. I was fed up and was ready to go to Candies but given mom’s limited eating options we stuck on after listening to profuse apologies and promises of the food coming soon.

You could say that this was a teething trouble of a new place but turns out that we were not the only people facing the hapless service. There were three girls at the table next to us who had ordered main where two dishes came out but not the Bolognese which they cancelled after repeatedly asking for it.
Others faced the problem too as I saw on twitter.
The owner apologised as did Bhakti.

Bhakti‏@little_chefB @Finelychopped @tv_wali yes, teething as well as training. I wud think another week, shud make the staff more confident.
Well, while one can give time to new restaurants my problem is that the money charged is not discounted at the start in which case one needs to get one’s act ready before the start. Plus they charged a service charge which was a joke given the pathetic service.

How was the food?

The Nutella coffee shake  (Rs 150ish) was the first brought to be brought out and was placed on the table with a thump which, as my mother pointed out, was bad training. The shake was truly phenomenal. The balance of Nutella and coffee just right. Not too sweet or bitter. Chilled just right. It felt really good after the long wait and given the heat outside. This is a winner 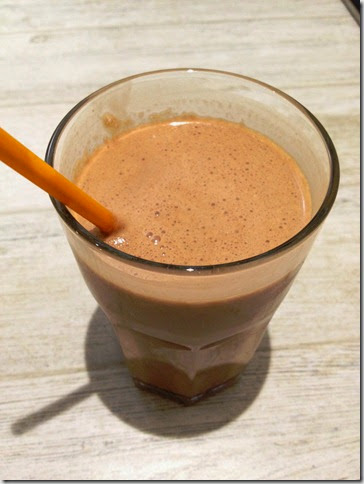 The food wasn’t brought together which was again an indication of poor service. Something many Mumbai restaurants falter on.

The rosemary lamb sliders (Rs 350 ish) left K rather unimpressed and all I liked were the buns which were soft and good. The meat to bread ration was warped and the size of the patty too small compared to the buns. The meat was chewy and not moist at all. They do much better and juicy lamb sliders in Cafe Zoe and lamb burgers in the Smokehouse Deli are phenomenal. 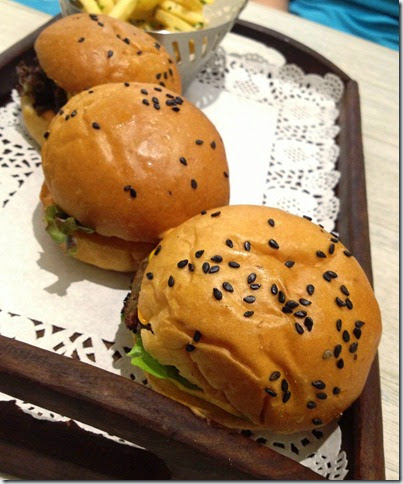 Mom’s cottage cheese burger (Rs 350 ish) was the last to arrive. They had at least got our instructions right and served with bell peppers and tomato instead of fried onions. The cottage cheese patty was moist which was good but was too oily and the buns were covered with grease which scared mom who is really careful about what she eats. She seems to be comfortable only with The Bagel Shop 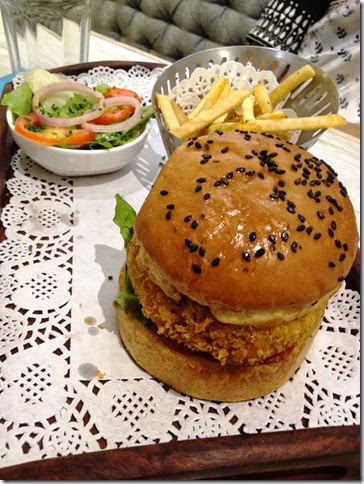 As K summed it up, not a place one wants to return to.

Also at around Rs 950 with service charge for two burgers and a shake it pitched its price at Smokehouse Deli levels without offering neither the great ambience or the fantastic food and great service of Smokehouse. So what’s the pitch then?

See this is why I am loathe to go to new places. Everyone wants to open European joints without getting European food. We are Indians and European food doesn’t run in our blood yet when is the last pohe, missal, kheema pao, Malvani or Parsi food joint opened in Bandra, let alone Mumbai? European food depends so much on good produce too which our local markets are not geared up too. I still miss the great kheema pao that Mocha Mojo did and they got their continental stuff right too. They knew food. Pity they shut down.

I would rather eat at a time tested old fashioned place rather than modern joints that serve stale sushi and soupy pastas.

If that makes me uncool, I’ll live with it. I am too old to waste time and triglyceride counts on mediocre meals.

As far as Fat Mans Cafe is concerned, I know that opening a restaurant is not easy and I hope they get their act right and do well.

Anonymous said…
bleed&gluttony ‏@bleedngluttony May 24
Looking for INSTANT weight loss? Just head to @FatMansCafe, and voila, what you ordered today, will arrive in 2015. #overhyped #bandra
25 May 2014 at 16:47

Anurag Mehrotra said…
Sticking to desi khana and old trustworthy places on this trip, all these new places have a lot of sizzle but no steak!
25 May 2014 at 16:57

Unknown said…
HA! I always trust your recommendations. Thank you for not wasting my time. Will stick to the original reco list as well. By the way I had an amazing Kheema salli at excelsior cafe the other day with really soft Yazdani bread.
27 May 2014 at 22:48

Rhea Mitra Dalal said…
A good kheema pao or a kheema ghotala is like a religious experience. I am so grateful that Cafe Monza in Kharghar does such an excellent job :)
Sometimes I also wonder if I'm missing out on something by not visiting the new places but you have beautifully summed up what we're not missing out on actually ;)
7 June 2014 at 18:15

Kalyan Karmakar said…
Thanks Jyo and Excelsior is wonderful, great cutlets too
7 June 2014 at 19:30

Kalyan Karmakar said…
Rhea, contrast this with Pizza Express which did some serious customer research before launching and the result shows
7 June 2014 at 19:31