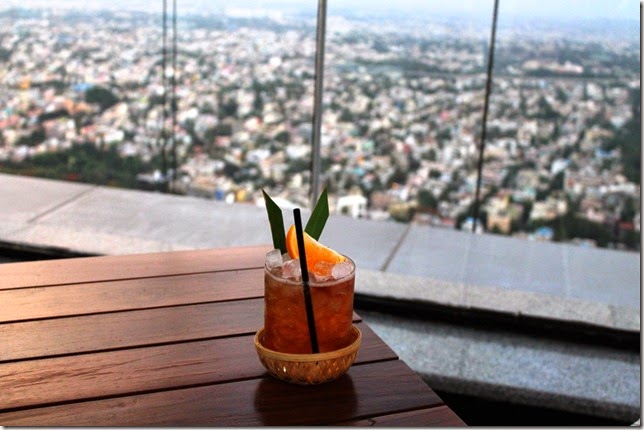 In the 90s I was fascinated by the idea of Richer Gere and Julia Robert’s characters jetting off to another city for dinner, or was it a concert, in Pretty Woman.

Well something similar happened to me the day before when I flew down to Bangalore. Just to eat!

I was a guest of the folks at High Ultra Lounge of Bangalore’s Brigade Hospitality Services for dinner. Cool Bangalore seemed a nice respite from muggy Mumbai. I was put up at the lovely Sheraton Hotel which is in Malleswaram. Malleswaram is what is known as Old Bangalore and its eateries like Veena Stores and CTR seemed to be good places to check out for my book. So off I headed to Bangalore.

I went to High at about 5.30 in the evening to catch the sunset on Wednesday evening. High is unlike any restaurant setting that I have experienced. You go up the glass capsuled lift all the way up to the 30th floor. High is on the 31st and at 421 feet above the sea level is the highest restaurant currently in Bangalore and in whole of South India I am told.

The view one got of Bangalore was fantastic. After Mumbai it looks like quite a flat city. The sun was about to set. The wind was quite cheerful and the weather pleasant and cool. Just the break from Mumbai that I was looking for.

It was pretty dry too and I kept drinking loads of water. 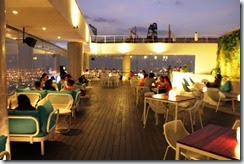 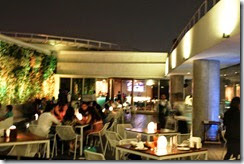 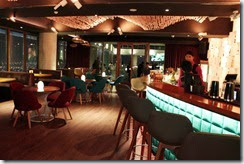 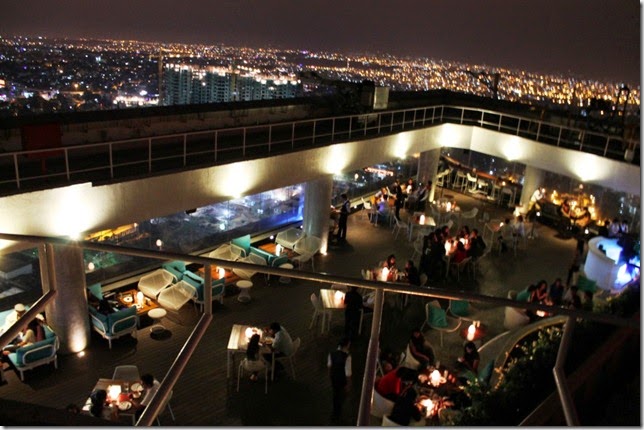 Hearing about my fondness for whiskey in house mixologist Guru, got me a ‘Walk the Talk’ which had some lovely lingering yet not overpowering notes of whiskey which were. Quite refreshing. He also wanted me to try a ‘Constellation’ and once again I was wowed by the clean flavours where the balance of the gin and vodka came out beautifully unlike in cocktails where often the ‘incidentals’ dominate the taste palate. Both the cocktails were quite boozy and yet very understated.

I quite liked the mocktail that Guru gave me. He has named it ‘Why Goa’ as he conjured it on an evening where his plans to go to Goa were cancelled. I made a face when I heard it was guava based but was charmed by the Bloody Mary like tomato, Tabasco and pepper flavour that blended through the sweetness of the guava.

I nursed the drinks as Anand from the Brigade Hospitality Services group that owns the High Ultra lounge took me around the 10,000 square feet complex with sits on top of the World Trade Centre Building. On top is a helipad which I am sure is the way to go given the traffic in Bangalore. 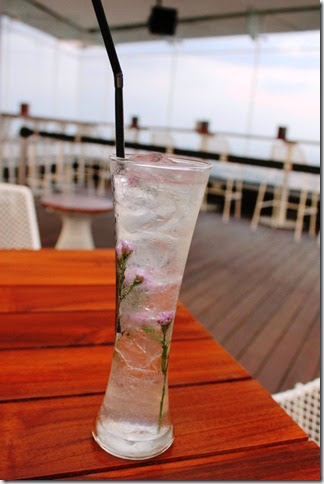 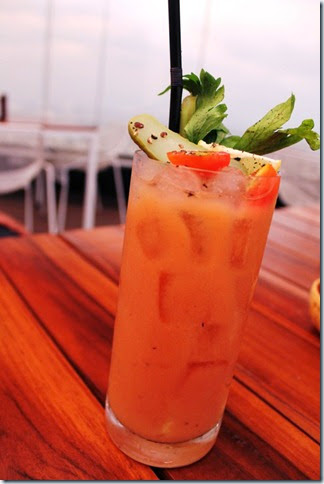 I was quite excited to hear that the food is Asian as I love Asian food and my excitement grew when I met executive chef, Zhang Hao. Hao is Chinese who has cooked all across the word including Zooma in Miami, Four Seasons in Riyadh and a number of other places across the world after moving out of China. His energy and enthusiasm is infectious. He got very excited when I assured him that I wouldn’t ask him to add spices to the dishes as many of his customers here do and that I eat everything happily barring vegetables. I was excited at the prospect of an authentic Asian feast. What I hadn’t counted on were the amazing flavours and meats that floored me later through the evening especially since Hao told me that sourcing of ingredients is one of the biggest problems that he faces. 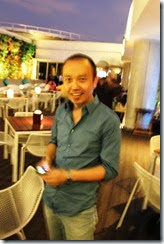 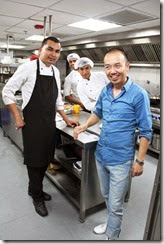 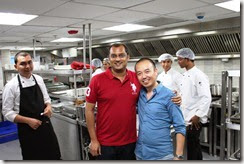 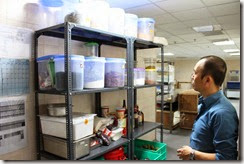 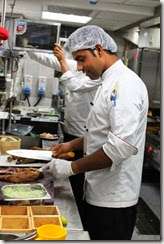 We settled down by the setting sun as dusk settled in and the music moved towards retro music from my time.

The first course was dim sums. Thin casings from which the flavours of pork and onion, prawn and bamboo shoot and pork and onion burst through. I was happy to see restaurants in Bangalore not being shy about putting pork and beef on their menu unlike those in Mumbai.

And we thought South India was all about vegetarian food! 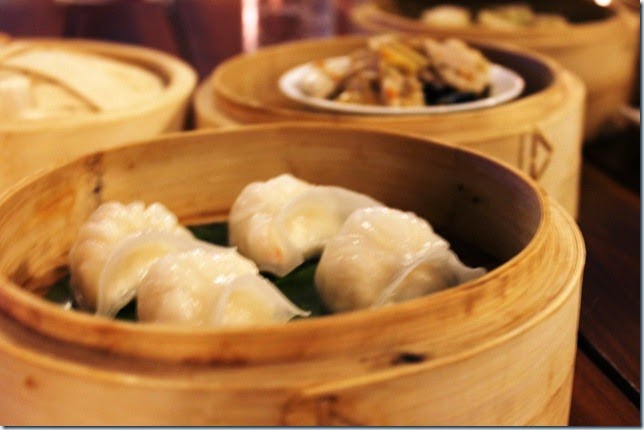 (The photos got more hazy as it became darker)

Next on was grilled tenderloin with a spicy sesame sauce. The steak was done medium rare and I was so happy to see the pinkness in the centre of what turned out to be some really juicy meat. I really missed K as not only was the setting rather romantic, but also because we were oohing and aahing about the pinkness of the steaks shown while watching this seasons Masterchef Australia. There was a fried green chilli on the top which like a good Bengali I bit into leading to a beautiful balance of the contrasting meaty flavours of the steak and the sweetness of the sesame and the heat of the chilli. 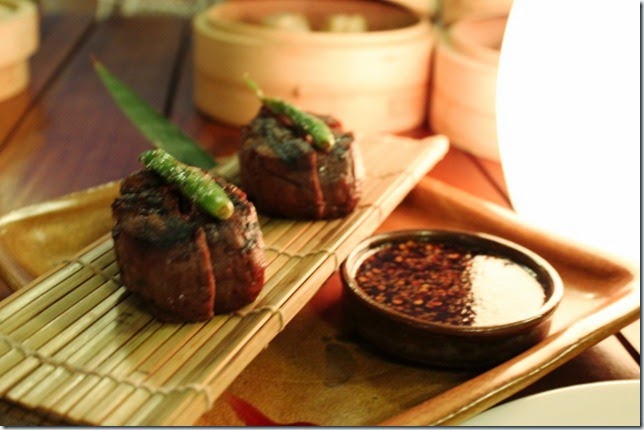 Pork belly was what Chef Hao got for me me next with a big smile. Not as big a smile as the one I gave in return when I bit upon the crispy crackling. I am yet to come across such crackling anywhere else in India. There was an interesting tanginess to it which Hao said he added through lime to balance the heavy fattiness of the belly. I am not sure if this worked for me that well. A tad less sharp would be good. 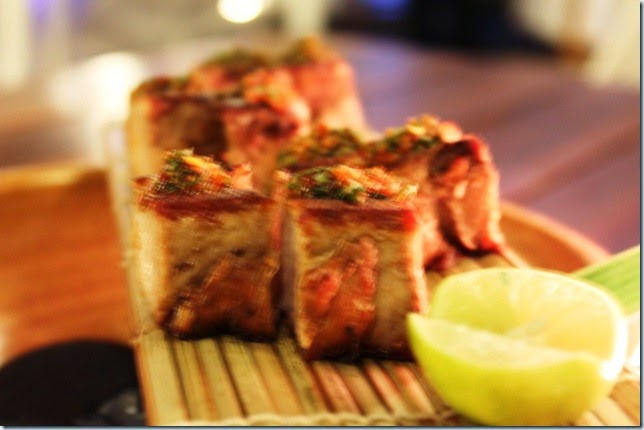 It was time to miss K again as the next dish was scallops which she dotes on after Cannes. Hao served the scallops with pickled Chinese plum. I loved the freshness of the scallops that he personally picks. They had such a lovely wobbly bounce to them. Truly special this was. 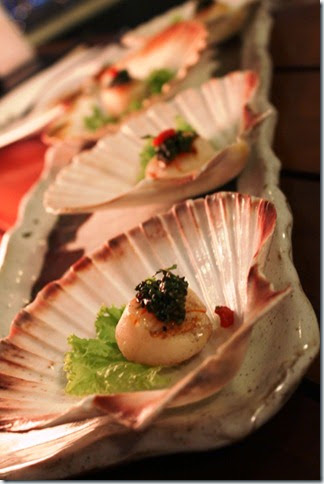 There was more pork belly coming my way, Chef Hao had finally found a man after his heart after all. So he sent some Korean tacos which looked liked a paratha and was filled with the most heady bits of Hoisin infused finely chopped, very soft and chubby pork belly. 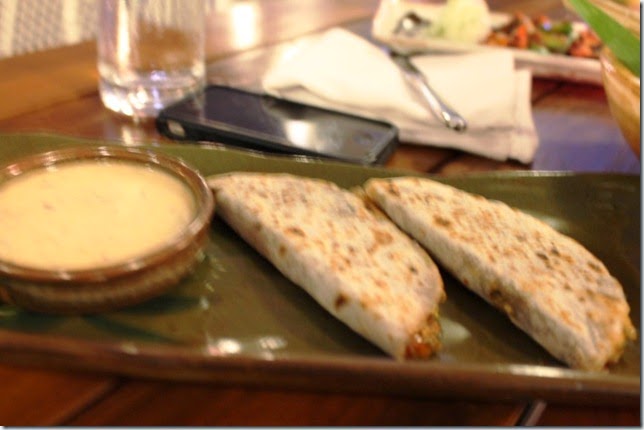 The starters ended with a crescendo with a beautifully cooked pepper king prawn were the prawn had been treated with lots of tender love and care. 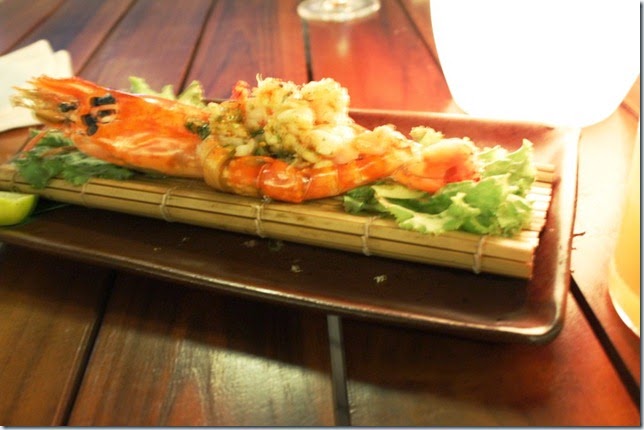 Wanting something ‘light’ as a palate cleanser got me a maki platter. This was a plate of really brilliant sushi  where the fish was substantial and the rice not ice cold and cloyee as it sometimes is in local restaurants. I was quite full but could not say no to sushi. We then walked around a bit and luckily there was enough place for that in the restaurant. I went in and saw the kitchen which is bigger than most Mumbai restaurants themselves to say the least and very clean and neat. 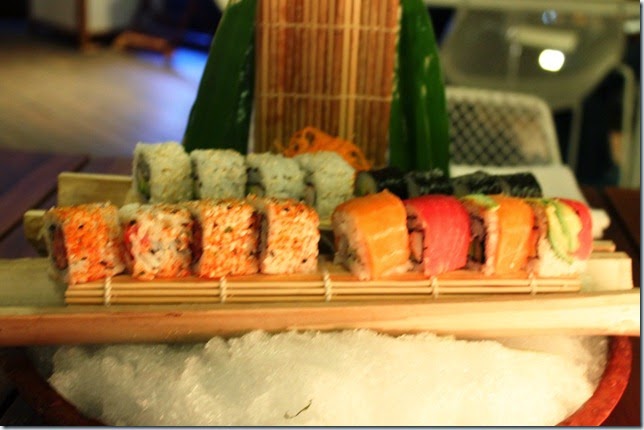 Chef Hao asked me what I’d like for dinner and I said something light like a fried rice or something.

Now my problem with fried rice in Indian restaurants is that they are served white without any flavours and made with long grained basmati rice and not sticky sauce. No such problem with Hao whose prawn fried rice is cooked in XO (extra old) chilli sauce and is made with sticky jasmine rice. I was a happy boy and ate on with the well flavoured stir fried vegetables that the chef had sent even though I was full. 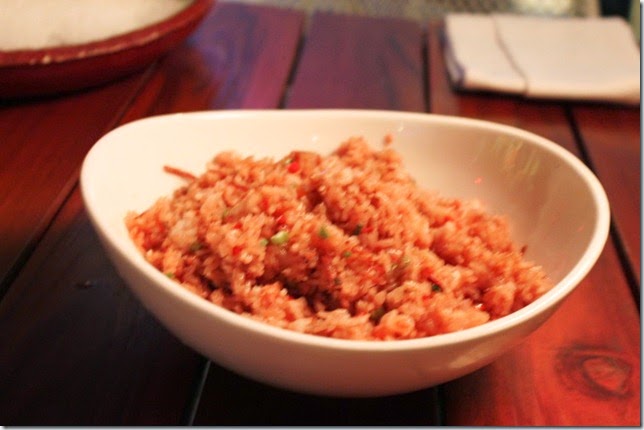 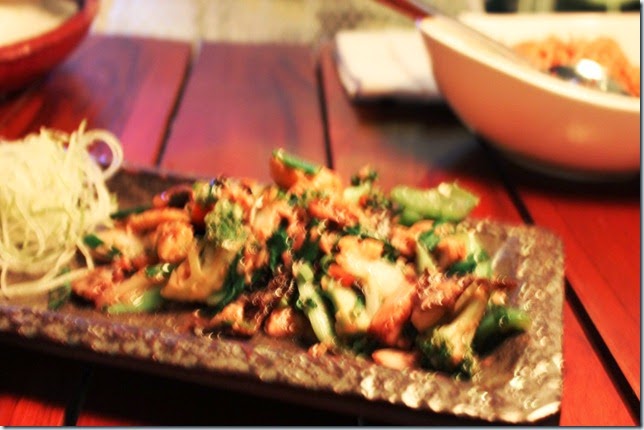 I was ready to call it a day but my gracious host and table mate, Anand Nayak of High Ultra lounge got me to taste a bite of of the banana caramel bannanofie pie. 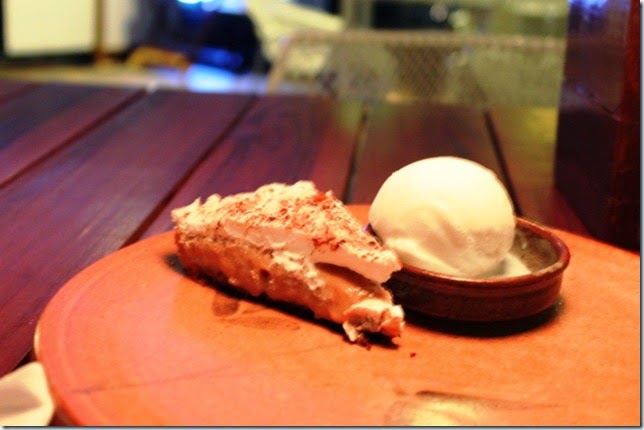 I finally left, down 30 floors to ground zero, the breeze still pleasant, glowing in the memory of a dinner which started at 530 pm and ended at 1030 pm, and an hour and a half’s flight to reach it.

Thus ended of an evening made magical by a fantastic chef and a setting that’s a great canvas for him to paint on. 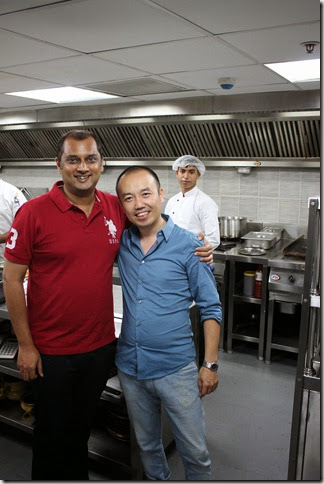