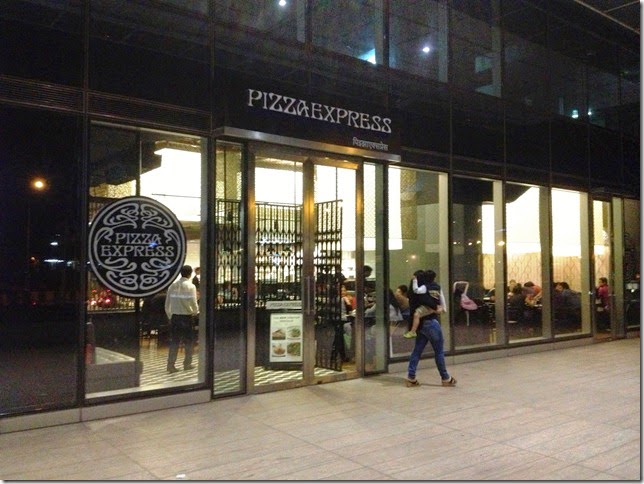 Having been involved in the market research of its product and service offer which went into planning its launch I was very keen to try out Pizza Express when it opened in Mumbai.

I was invited to the launch and went for it but that never tells you the real story does it? The only ‘problem’ with the first Pizza Express is its location. It is in Colaba and when we go all the way to Colaba we head to Ling’s Pavilion, our favourite restaurant in Mumbai, without a second thought. So the Pizza Express visit kept getting postponed by more than year. Then it opened in the suburbs, Andheri W I believe and then I was told, in BKC. BKC is fast becoming a restaurant hotspot with LPQ, CPK, Masala Library, Yautcha, Ping Pong and so on opening there. It’s reasonably close to Bandra W and we decided to drive down last Saturday night.

We had booked and gone which was good as the place was quite full. The crowd was largely made up of family crowds, the mood happy and boisterous, and the vibe that of a casual dining place where you can sit back and have a good time. We were told on phone that the last food order is at 10.45 pm so we hurried and went by 9 pm. I saw the pizzas being made fresh in front of people as the concepts in the research had promised. 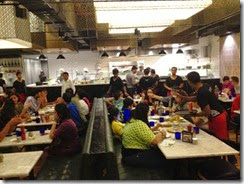 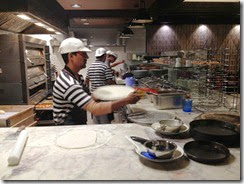 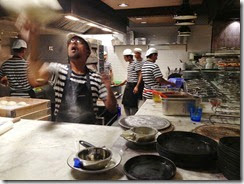 Amey, the wait staff, at our table came and took our order. All the research which had gone into the service levels shone through as he warmly and competently took our order.

I started with a berry fresca (Rs 160 +) to drink as I wanted a fizzy drink and they didn’t have a fresh lime. The drink was fairly refreshing and thankfully not too sweet.

After seeing them in the research workshops I had to order the dough balls (Rs 175 +). These were pretty fantastic. Warm and crusty outside and soft inside. I had it with the very indulgent garlic butter that came with it. K loved it by itself and had it with a bit of chilli olive oil. She said that it reminded her of Parsi brun breads. She was really excited with it and said “it’s so good, I can marry them”. 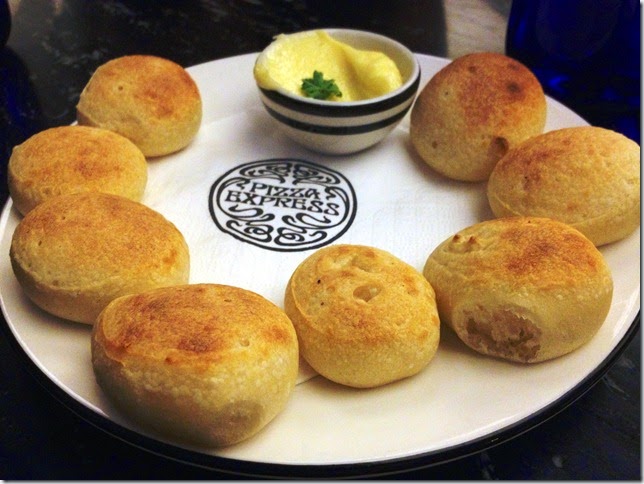 K is not a big pizza fan and went for a pasta. She chose the farfalle con salsiccia (Rs 475 +) which turned out to be a great choice. The pasta wasn’t soupy as some Mumbai restaurants make them. It was a la dente and the intense cheese and white wine sauce enrobed the pasta and didn’t swamp it. Cutting through the flavour and cheese were the robust bites of spiced pork sausage and the occasional bites of the spice of rosemary. This was a dish full of passion. 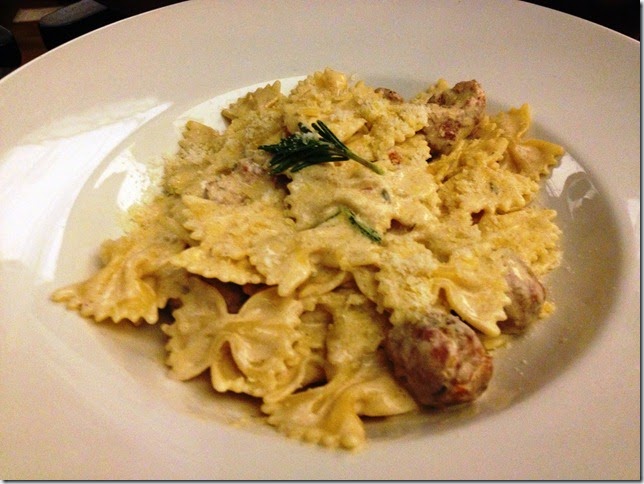 I was attracted like a homing pigeon to the gorgonzola and pancetta in the description of the Romana Da morire (Rs 650 +) and ordered that pizza even though Amey tried to dissuade me saying it would be too strong but I love my blue cheese.

I was a bit perturbed to see the greens on the pizza when Amey got it. It looked like a very badly mown lawn where the grass has dried up. Still I was happy to see that the pizza was nice and supple and could even be rolled up. 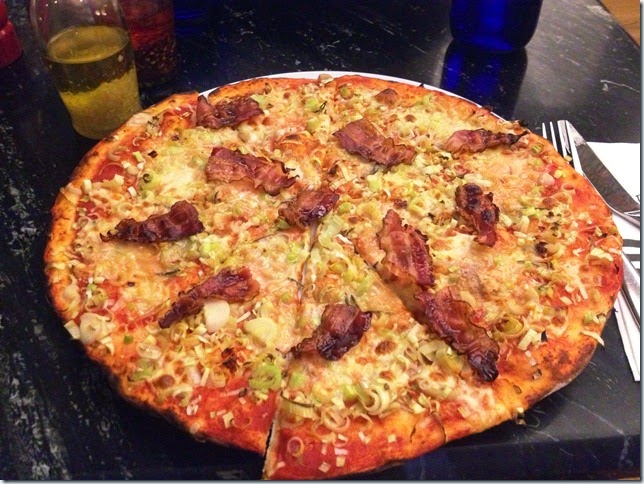 I took a bite and grimaced. I didn’t like it. I wasn’t getting the hit of sharp cheese which I expected.

Amey came and asked how the food was and I played along and said it was fine and quietly ate some more. I asked Amey if the greens were leeks and he said they were and added that they were added to make the pizza acceptable to the ‘Indian palate’. Well, not this Indian! I mean if I want a harabhara Jain pizza I’ll go to Shiv Sagar not Pizza Express! I had ordered the pizza solely for the Gorgonzola after all.

K didn’t like the pizza at all and offered to buy me another as the dinner was her treat.

Then Rishabh, the manager came up to us and asked how the food was. I praised the pasta but then gave in and said I didn’t like the leeks. Amey immediately asked me if he could make me a fresh pizza. I was a bit embarrassed as I had had half the pizza but it was really bad. So I agreed.

He said ‘give me ten minutes.’

A bit later Amey came with a fresh pizza. Just cheese and pancetta. No leeks or artichokes thankfully.

I took a bite of the new pizza and I could hear the birds sing. All was well with the universe again. Great texture of the pizza. The crust would bend into a roll (their classic pizzas are thicker and the crust looks like a naan). The flavours of gorgonzola loud and clear with the heat of the chilli oil giving it an interesting contrast. The pancetta making the experience unabashedly meaty. I was in cholesterol heaven and was one happy Bengali boy.

K had a slice and approved of it too. 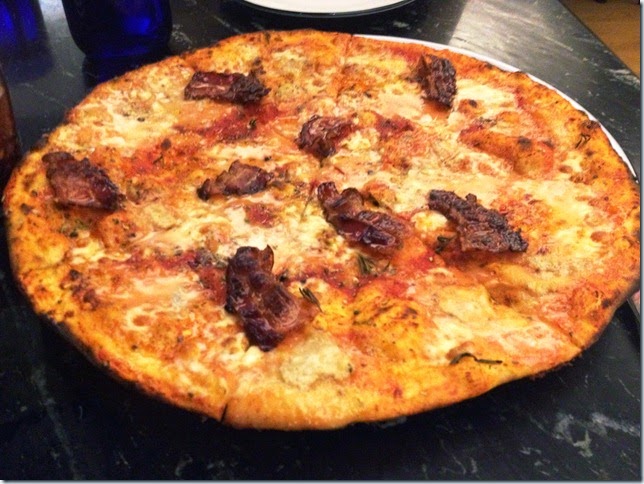 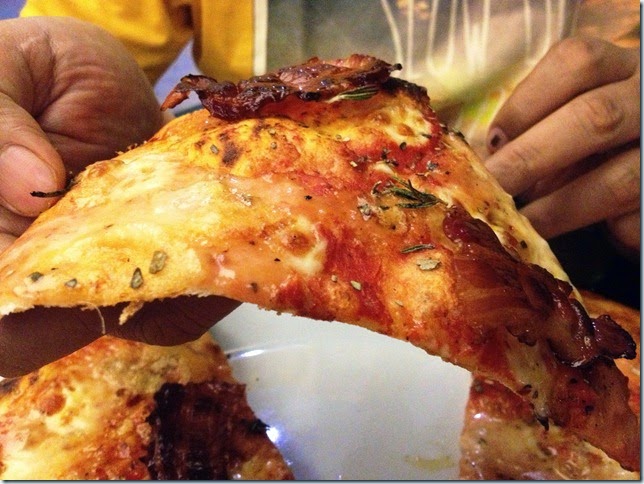 We were pretty full but Amey insisted that we go for the cheesecake. I remember my colleagues in the research, who tasted it, raving about it and Zeni Irani on twitter praised it too so went for it. I am so glad that we did. The vanilla cheesecake(Rs 325 +) had a lovely baked caramelised touch to it. Great texture to the cake, lovely flavour that we were insistent yet not overpowering. I had some of the gelato on the side and the raspberry coulis as per Amey’s suggestion. K had it by itself and said it was like a Parsi bread and butter pudding.

In her words, ‘we started with a Parsi touch and ended with one’. 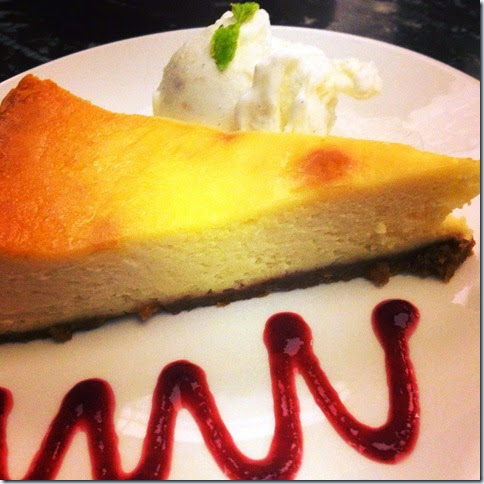 I’ll definitely go back for each of the dishes we had and the great service.

This is a market research project I was really happy and proud to be a part of. 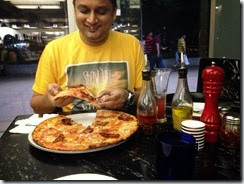 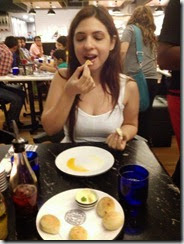 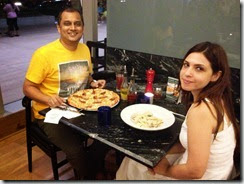 The Bride said…
I love Pizza Express here n HK too. Because it's a chain, it's not perceived as high end, but I've found the food consistently good.
4 June 2014 at 07:25

Anonymous said…
Pizza express outlets for lunch are like sunshine ! Bright, happy. Love them.
6 June 2014 at 12:21