Where the new meets the old, The Sheraton Bangalore…Bene, Feast

I was hosted by the Sheraton Hotel during my recent trip to Bangalore.

The Sheraton is based at Malleswaram, also known as old Bangalore. The Sheraton though is part of the Brigade Gateway Complex which has the 31 storeyed World Trade Centre and the pretty nifty well stocked Orion Mall which has about 42 eateries. This campus is as modern as it can get and stands out as an interesting island in the largely Tambram dominated residential area of Malleswaram where the old and the new coexist.

There is a sense of warmth and space which permeates through the Sheraton and the lobby that welcomes you is lively without being a fish market. I was whisked up to my room on the 12th floor which is where the Starwood Preferred rooms are. I have stayed across quite a few big hotels in the world and have seen a variety of rooms but the room at the Sheraton I took to immediately. There was a certain warmth to it thanks to its wood and cream interiors which didn’t make one feel lost though one was alone. The room is quite big and the design fairly uncluttered, utilities easy to spot and the glass paned bathroom and the nice view outside the room give it a sense of space and luxury. Features ranging from little touches such as plug points by the bed to a super comfortable couch and bed made it a perfect pit stop for what was a fairly packed eating trip for me. 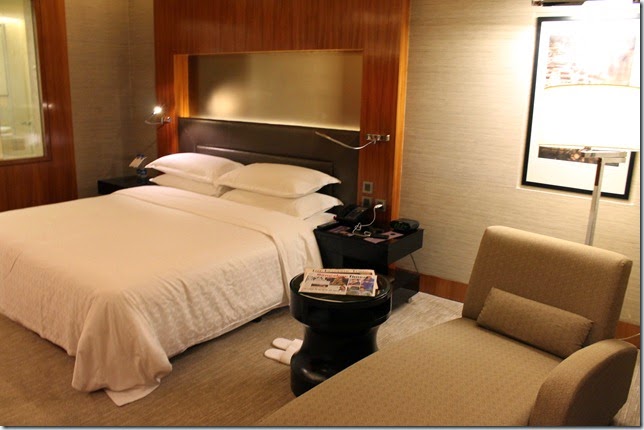 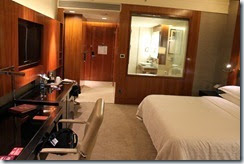 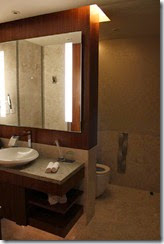 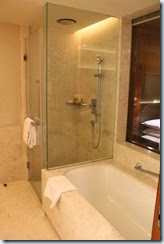 Soon after arriving I joined Saurabh and Sadhvi from Sheraton at a lunch which they hosted for me at the Bene, the Italian restaurant of Sheraton Bangalore. The Bene is currently run by young chef Hemant who has been trained by international chefs from across the Sheraton worldwide group. The restaurant was empty apart from us in the afternoon. Once again the sense of space which characterised the hotel was evident here. 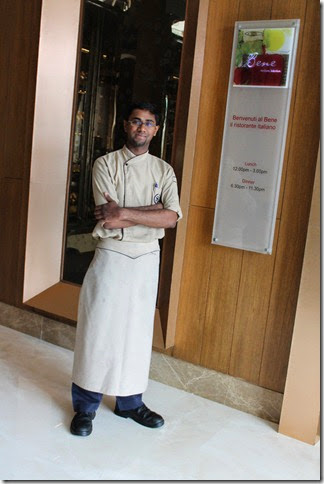 We started our tasting menu with a colourful bruschetta which was pretty appealing on the eye and had a mix of contrasting textures and tastes such as the tanginess of cherry tomatoes, sweetish onions, zucchini with a spring to it, cold cuts and some parmesan which all came together on the soft inside and crisp outside bread. 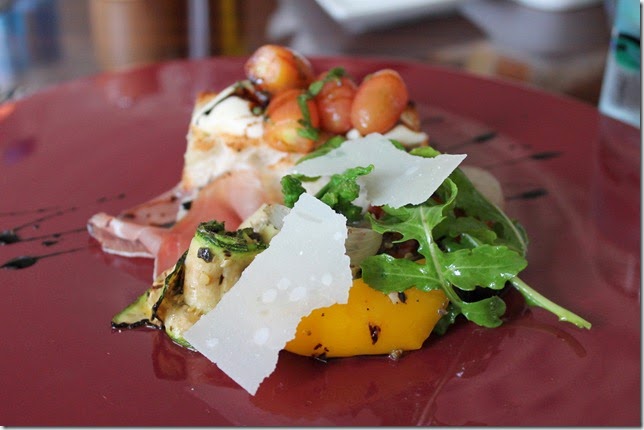 Next on our tasting menu was a soup with parmesan foam which worked more as a palate cleanser for me than as a part of the meal.

The dish that followed was one of the highlights of my Bengaluru trip. Cauliflower risotto topped with grilled foie gras. We had fallen in love with grilled foie gras in Spain last year. The grilled Foie Gras in Chef Hemant’s Bene matched up to the taste of those we had in Spain. The risotto was packed with flavours too and the rice a la dente, not mushy, nor raw. I went to heaven and back with this dish as I tweeted from lunch. I whatsapped the picture to K who for once was really jealous of my food travels. As she pointed out, you will rarely get foie gras in Mumbai. 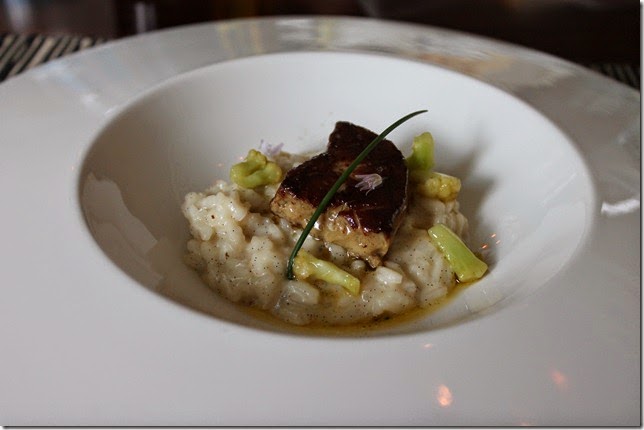 This was followed by a rack of lamb with a very alluring tomato parmageno. The lamb was very good quality but was a bit over done making it a tad drier than we would like. If you order it ask for it to be done medium rare and I am sure it will combine well with mushroom jus it was served with. This was the prettiest dish we had that afternoon.

Chef Hemant has a little herb garden outside and between cooking would rush out and pluck some flowers to make the plate more dainty. 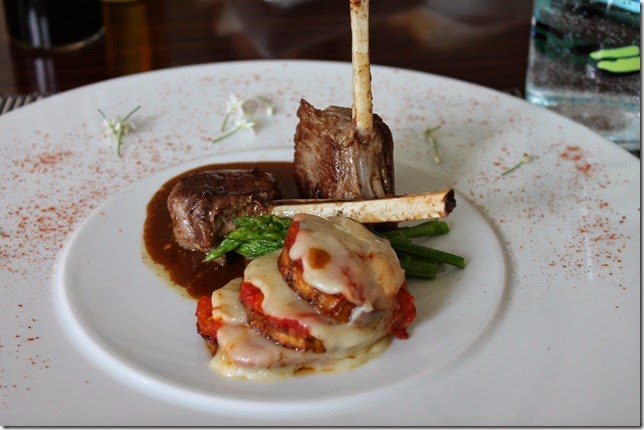 I was too full for dessert but the general manager, Saurabh insisted that I try a bit of the tiramisu. I was packed to the gills but yet the booziness of the tiramisu gave a lot of pleasure. 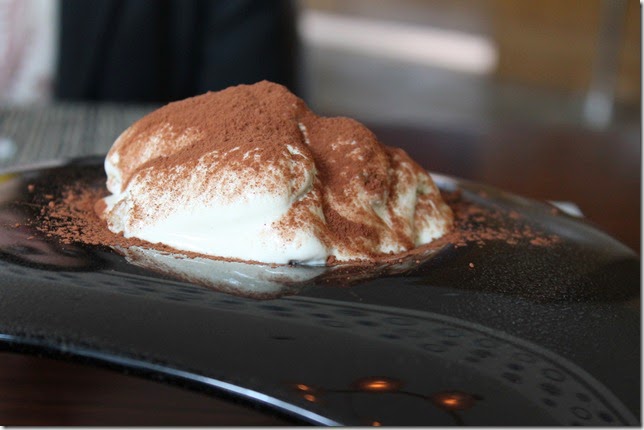 Next morning the folks at Sheraton had organised a car and a very knowledgeable driver for me to try out the local South Indian breakfast options at Malleswaram and I had a great time there. More on that in my next post.

For lunch (!) fully stuffed, I joined Sadhvi and Vijayan at the Feast. The Feast is the all the day dining restaurant of the Sheraton. Once again it gave a sense of space which as a Mumbaikar I am unused to. I was too full to eat but the smiling waiter insisted on my trying out what turned out to be some very succulent chicken tikkas and sheekh kebabs. We then chatted for a while specially on food which is something that excited Vijayan too. I had a very well made double shot cappuccino as we spoke.

We then headed to the food counters which have a mix of salads and mains laid out and live counters too. I didn’t want anything heavy so had some nice and light mezze (hummus and babaganoush and curd rice) as starters. 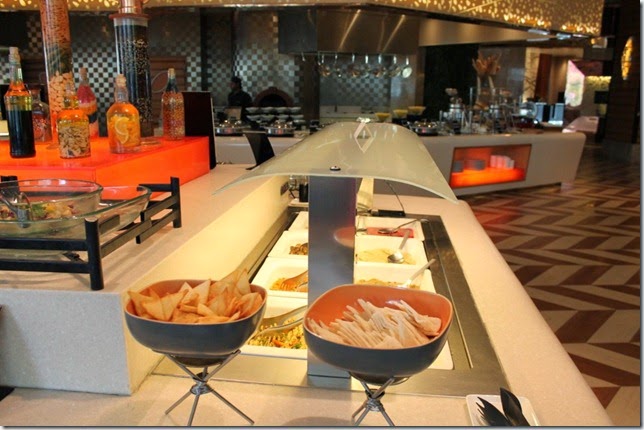 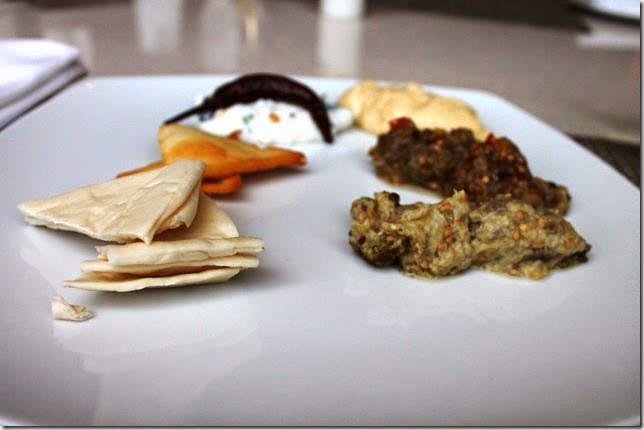 I didn’t want anything Indian after the heavy breakfast and the chef made me a pesto (no cream) spaghetti with bacon and mushroom which was just what I needed. It was made perfectly flavoured, just the way I like it. 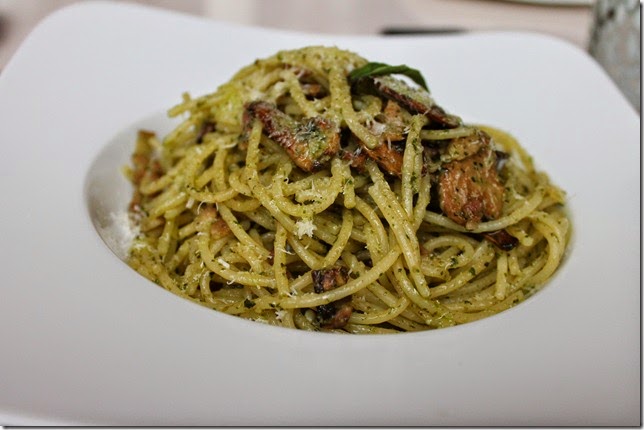 Once again I was too full for dessert but with the excitement of a child Vijayan insisted that I try the cold stone ice cream. 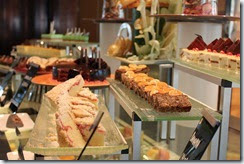 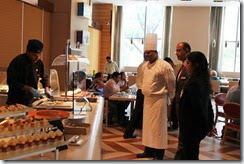 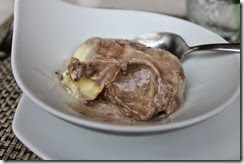 Happy and yet tired from 24 hours of glorious eating at Bangalore I headed to Sheraton’s Shine spa where a relaxing aromatic massage called The shine put me in the mood to just snooze happily in the car on the long drive back to the Bangalore airport. 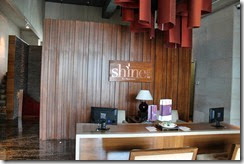 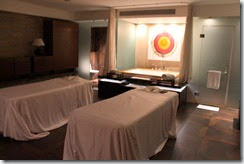 Thanks guys for really pampering. I returned home a happy camper.