I normally avoid restaurant launch reviews because one ends up eating more than one should, I hate travelling in Mumbai and the experience in previews is not typical of a regular customer experience.

Last night I went to review the soon to be launched Cafe Nemo and managed to avoid the first two worries and formed an opinion on the third.

For a Bandraite, the PR person’s entreaty that Nemo is just at the other end of the Sea Link was tempting. True enough, reaching there in the rainy evening was a breeze. You cross over to Worli. Take the first left. Go through a disaster area and then reach the restaurant which I am told is where Cool Cat Cafe used to be. It is located in a cottage divided into rooms where Sindhi refugee families were housed in the post independence days.

Excess eating wasn’t a problem yesterday evening as I had a plan and stuck to it. K came with me and we did a bit of role play and pretended to be Masterchef Australia judges. Which meant that like George Colamboris, I portioned the food, and then had exactly one, or two at the most, spoons of each dish. I forced myself to not feel bad about wasting the food. But frankly that’s the only way that one can manage a tasting and not balloon up.

Cafe Nemo is not fully ready but has three sections and a private room making it moderately large by Mumbai standards. The place has a consciously unfinished looked to it balanced by murals of the Worli area. The owners pay testimony to their surroundings and have tried to use as much as possible of local produce I am told. The lighting is a bit dim as you can see in the shaky pictures. 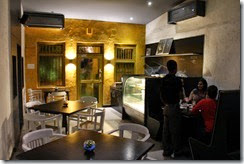 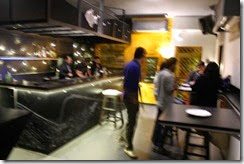 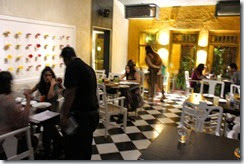 I spent quite a bit of time chatting with Sahil, one of the partners. An economics student by training, with no food industry background, Sahil gets an intuitive understanding of food which shows in the menu. He is a guy who gets food even though he hasn’t been trained in it.

They describe the menu as ‘agnostic’ at Cafe Nemo, which is interpreted as a mix of Asian and European flavours. Nemo is from the folks who have brought the pretty popular Jamjar Diner (which I am yet to visit) in Versova and Bonobo. The owners say that Jamjar is where they serve the sort of food which customers want while in Nemo they want to serve the food which they like experimenting with.

The result, as we saw, are dishes which are largely very full on flavour making them very appealing to the palate.

So which are the things that worked?

We had a mock tail called Limonella which was tangy and refreshing.

I tried a miso soup where they had Indianised it a bit back by diluting the miso flavours with mushroom broth which worked for me as I find miso in its pristine form tough to stomach. The soup had tofu and shitake dumplings where the casing was thin and perfect and the flavours of the mushroom burst through. I didn’t see any signs of the tofu. I had purposely chosen the vegetarian option and was happy to see that the flavours came through well in it. 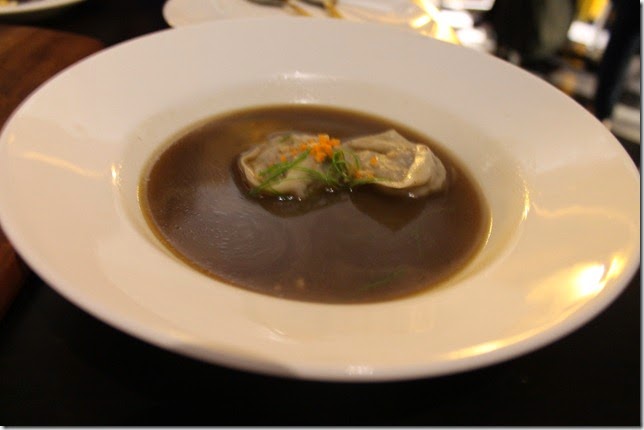 They have something called bao which is similar to the Momofoku inspired buns that they serve in Singkong.

We were blown away by both options that we tried and I found it very hard to stick to my one or two bites only rule but I did and am proud of myself.

The first was Penang chicken where the succulent chicken shrouded in a sharp lemongrass flavour with a textural break provided by crushed peanuts was very enticing. The soft, plump pita like casing making it a nice sandwich which was all about the filling and not the bread.

The char siu baos were a winner too. Plump, chubby, fatty plump size bites pork belly where the flavouring was just right and not too sweet. K took out the pork belly and finished it off straight when I was not looking! 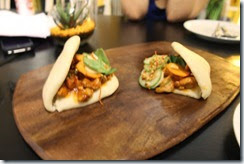 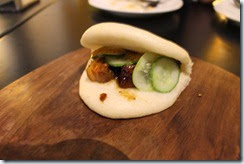 The Spanish omelette was nice and had strong eggy flavours and thin slices of potato and the shallot jam added another taste dimension to it. It was thinner than the tortillas of Spain and was served hot unlike in Spain in deference to Indian tastes which wouldn’t like a cold omelette according to the owners. 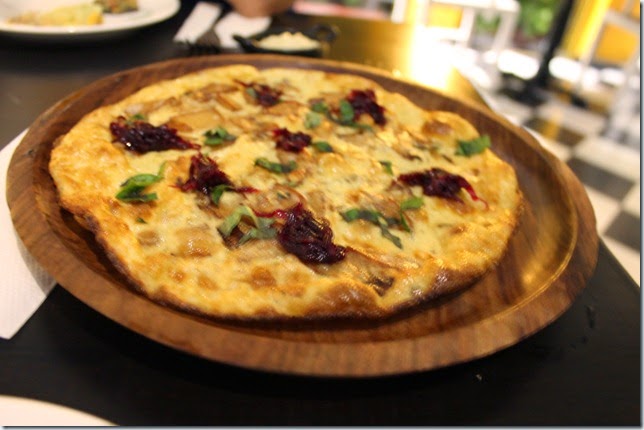 I was quite impressed by the Galby steak and the creamy sliced potatoes (which need a bit more seasoning). The quality of the meat, local buffalo, was very good and had the intrinsic sweetness of good meat. The only sad part was that the chef did it medium when I had asked for medium rare. Sahil explained that chefs in India are a bit conservatives when it comes to Indian customers and the levels of doing steak. Perhaps one should ask for a gora medium rare! 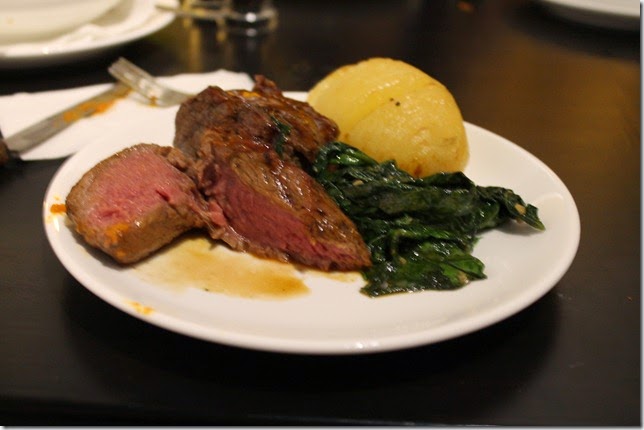 The desserts were pretty good.

Big Bhookad, Adarsh Munjal, had praised the chocolate creme pot after he went for the tasting and it did turn out to be a dark chocolate lover’s delight with a great texture. K finished the whole of it. I quite like my ration of one spoon that I tried.

There was a soufflé cheesecake with balsamic coulis which had the taste of a baked cheesecake but the airiness of a soufflé making it quite a nice dessert. 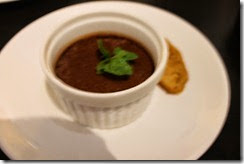 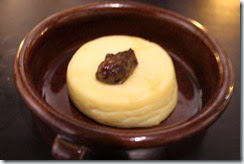 What didn’t work for me was the goat cheese and mushroom pizza where the crust was too crispy and the toppings didn’t come together well. Possibly the only really disappointing note of the evening. 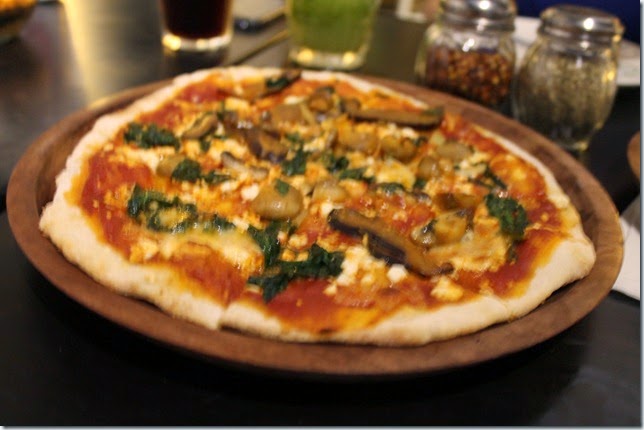 We got excited and ordered the steak tartare for K who just loves her tartare and doesn’t get it in India. The tartare was seasoned well but was a bit coarse and chewy in texture and lacked the creaminess of the tartares of Prague.

The Nemo grilled chicken lacked the intensity of flavours and the succulence of chicken one had to begun to expect here.

The acidity of the citrus chicken in the rice bowl was just too intense to be enjoyed though I quite liked the butteriness of the sticky rice. 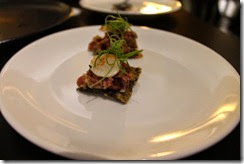 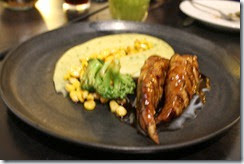 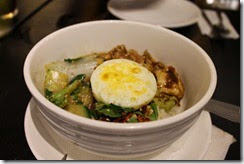 After the chocolate pot and the soufflé cheesecake, the Christmas cake like orange clove cake was a bit stodgy and boring.

Overall a menu that showed a lot of promise and how it performs once the restaurant opens to the public would be the key.

Which brings me to my third reservation against restaurant previews. How ‘representative are they’?

I felt a parallel with ad pretesting in market research where you show an ad in artificial conditions making the respondent respond to the quality of the creative in its purest form taking issues like attentiveness, exposure opportunity etc out of the equation. In a way a food pretesting is like that too where one can comment on the food presented the way chef would like it to without accounting for things like price, service, consistency, portion size and so on. The focus is just on taste and that’s how you should see this. See it as what to expect if everything goes right.

Coincidentally, to build on the restaurant preview and ad pretesting parallel, Unilever calls their ad pretesting tool ‘Preview’ which is a coincidence of course.

Here’s one negative of attending a preview, especially when it turns out to be interesting. You drop everything and write about it!

Sassy Fork said…
I think it's a great idea for the restaurant to have such previews cos they can take corrective measures before it launches,limiting teething problems
31 July 2014 at 14:59

The knife said…
@Sassy Fork, indeed. In fact the folks at Nemo had called me for feedback and not a blog post which I appreciate
31 July 2014 at 16:42