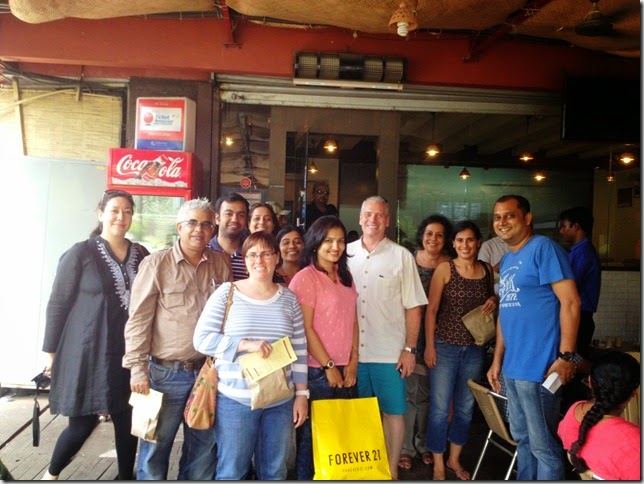 It’s the first day of heavy rains in Mumbai. The rains are my favourite weather to write in. I love keying to the sound of the crashing rains.

Thankfully though the skies held clear Saturday when I conducted the Bengali Oshiwara Finely Chopped Mumbai Food Walk. I guess Mumbai rains are more fun when you are indoors than outdoors!

Few things excite me as much as talking about Bengali food and culture. I love it when I can tell people more about about my origins and help them to understand us better. That there is a lot more to Bengal and Bengalis than louts like Tapas Pal. Hopefully last Saturday we achieved a bit of that.

The setting for our walk was Oshiwara, a suburb which has a concentration of Bengali restaurants. Well ‘concentration’ as in two restaurants, Calcutta Cub and Bhojohori Manna, within shouting distance of each other and now a sweet shop, Kamdhenu, has opened there too. Within driving distance is also Hangla and Oh Calcutta near Infinity Mall making it quite the Bengali hotspot. I have also heard on twitter and through Facebook mails that Gangaur in JVPD, certainly not in walking distance though, now offers Kolkata phuchkas. There was once a time when we used to head to Tardeo’s Oh Calcutta for Bengali food. Now it’s Oshiwara and Bhojohori Manna. Of course there is Bong Bong at Bandra too so we are not as marooned as before over here.

Our group on Saturday was a mixed one as always. We had American and British expats in Mumbai wanting to explore more of the city they live in. Indian expats in New York visiting home. Out of towners from other parts of India. Former Calcuttans who were missing home food. 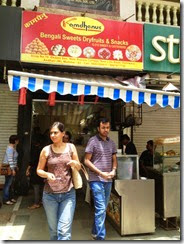 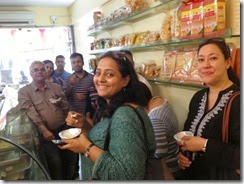 Our first stop was Kamdhenu near Sammy Sosa on the Oshiwara Link road. Kamdhenu is the Mumbai outpost of the South Kolkata sweet chain based in Bagha Jatin in Kolkata. It' is still pretty new here. The stock of Bengali sweets is currently very limited compared to Sweet Bengal. We had kheer kodom, lyangcha and some lovely roshogolla as we chatted about the role of sweets and sweet shops in Kolkata and how they act as pit stops for people on the go and how tucking into the sweetshop for breakfast is quite the thing to do back home. They made us some make-shift jhal muri at Kamdhenu. The sting of mustard oil was there but no chanachoor, cucumbers or coconuts slices. Still one got a feel of how jhal muri is spicy and different from bhel puri. 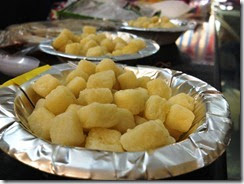 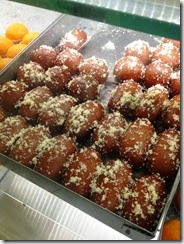 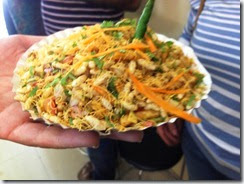 Our next stop was Calcutta Club. Calcutta Club was the first of the Bengali restaurants to set up shop in Oshiwara. It is owned by an ex Bengali corporate who is married to a Gujarati lady. You get some pretty good home styled Bengali food here and the tiny restaurant was getting pretty packed that Saturday afternoon. We got ourselves a couple of tables. In my sights was the biryani which they make really well in Calcutta Club. We spoke about the origins of biryani and how it is the Indianised version of the Persian pulao. We spoke of how biryani was introduced to Kolkata when Nawab Wajid Ali Shah was exiled to Calcutta from Lucknow which is also when the potato made an appearance in biryani. I was so happy to see folks in the folks warm up to the subtlety of the biryani here. 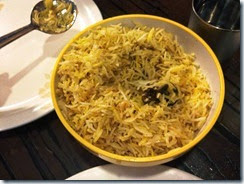 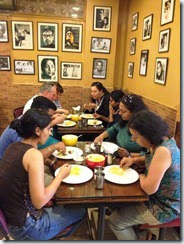 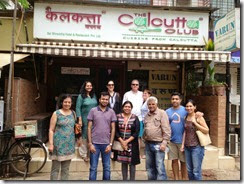 Our last stop was Bhojohori Manna where, as K says, they treat me like a son in law. Siddhartha Bose from Calcutta had made all the arrangements. Lahiri babu marshalled his troops and ensured that our group was served seamlessly. Priyanka was there to play hostess and to join me in taking us through the menu. 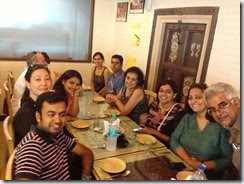 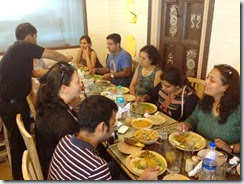 And what an epic lunch it was. Crisp luchi, plump begun bhaja, sweet chholar dal, bitter shukto, somnambulant alu posto, a new introduction of the divine mocha chingri bhapa, shorshe ilish which was flavoursome but didn’t sting, spicy luscious kosha mangsho that combined beautifully with mishti pulao, notun gurer payesh which reminded me of my granny, shondesh and then paan. 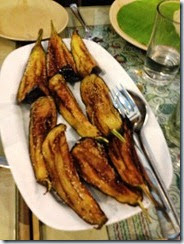 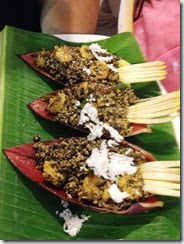 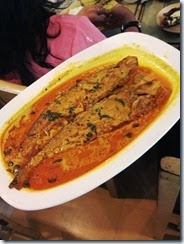 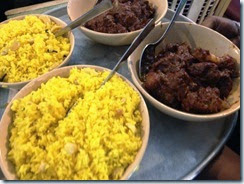 Yes, they say that Bengali food walk is the one with the most amount of food and the least amount of walking…that’s as authentic as it gets.

In case you are wondering what’s for dinner tonight, it’s ilish bhaja and khichudi which is the Bengali thing to eat when it rains

BombayJules said…
Aaaaah great memories and the best way possible to end my Mumbai journey! Thanks again Kalyan!
3 July 2014 at 15:29

~j~ said…
Yummy post! Makes me want to go back to Bhojohori Manna right now for all that. I quite liked the shukto, by the way. Felt quite comforting.

Kalyan Karmakar said…
Gia, we should head to Oshiwara together once and thanks, coming from you that means a lot
4 July 2014 at 11:55

Kalyan Karmakar said…
Thanks for all the support Julia and thanks for making it despite the busy last few days. I am so glad I could take you out for the Bengali meal
4 July 2014 at 11:57

Kalyan Karmakar said…
Thanks so much for coming Jayashree. Glad you enjoyed the food. You'd been to the first walk I ever did. Wonder if you felt a difference
4 July 2014 at 11:58