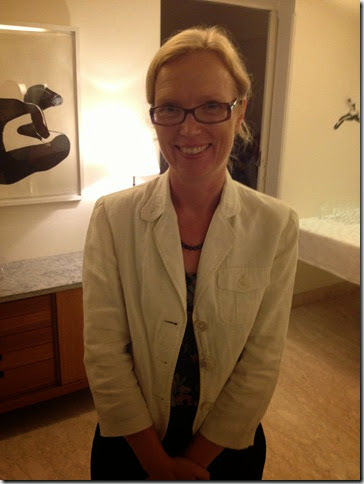 So what do you have to do if you are a consul general?

Well, if you are the Swedish Consul General in Mumbai like Ms Fredrika Ornbrant then you open your house to a group of food bloggers and tell them about the food in your country, sing a song, hand out glasses of schnapps, bake all day, peel an apple, cut some beetroot, do food demos and flash an infectious, warm smile at your guests. 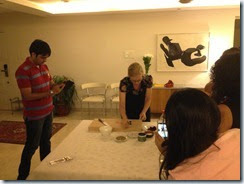 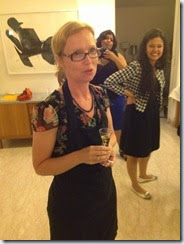 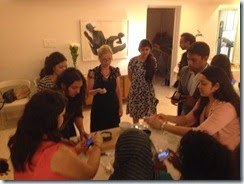 We were at Ms Ornbrant’s house this evening where she introduced us to Swedish food. Having last been to Sweden when I was in my nappies, it was nice to get to know of Swedish food beyond the meatballs of the Ikea cafes.

Fredrika told us about how in the 80s and 90s it was all about international cuisine in Sweden, a bit like in India now, but now there has been a move back towards Swedish food which folks are learning to discover. There was also an interesting bit about how produce on Swedish lands are accessible to all, if I heard her right. Wonder how property is managed then. She spoke about the popularity of fish, game meat and potatoes in Swedish cuisine.

Our conversation started over some delectable Swedish flatbread and smoked salmon rolls. The flatbread was really understated and provided the perfect foil for the salmon to be shown in its full glory. The ingredients used were locally procured so the salmon was smoked and Norwegian. In Sweden the salmon is often salted we were told. 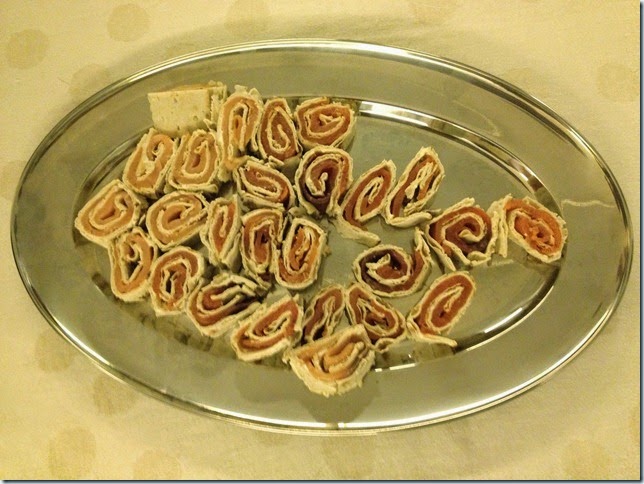 Next on was a feta, boiled beetroot, walnut and onion salad which Ms Ornbrant showed was very easy to put together. 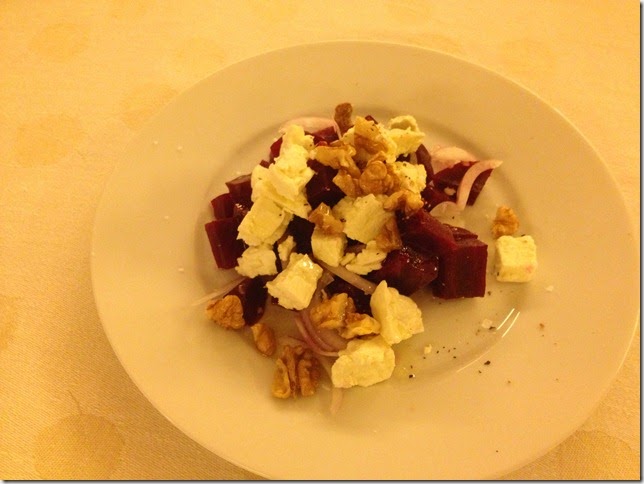 For the mains we had Jannsons temptations. A Swedish casserole which consisted of potato fingers baked with onion, cream, butter and anchovies and bread crumbs. It get its seasoning from the anchovies and the combined flavour of baked potatoes, cream and anchovies with the zing of the sliced onion and the crunch of the breadcrumbs made for a delectably intricate dish. It reminded a couple of us of the Bengali alu peyaj bhaja. The smell of the baked potatoes was intoxicating and I was the first to dig in and took seconds too very animatedly. The dish was deceptively filling though and I struggled a bit through the second helping. Don’t go by the photograph, after all comfort food is not necessarily about being pretty food. 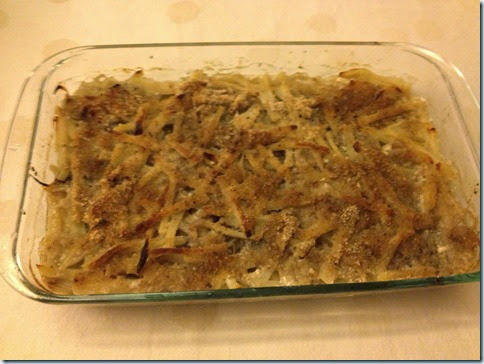 Last on was the dessert of apple crumble and a home made vanilla custard. Ms Ornbrant showed us how the crumble was assembled before taking out trays of apple crumble that she had baked before. The soft textured sweet baked apples were contrasted beautifully by the oat based crust and the two were held together by the vanilla custard making this a wonderful and yet simple dessert. 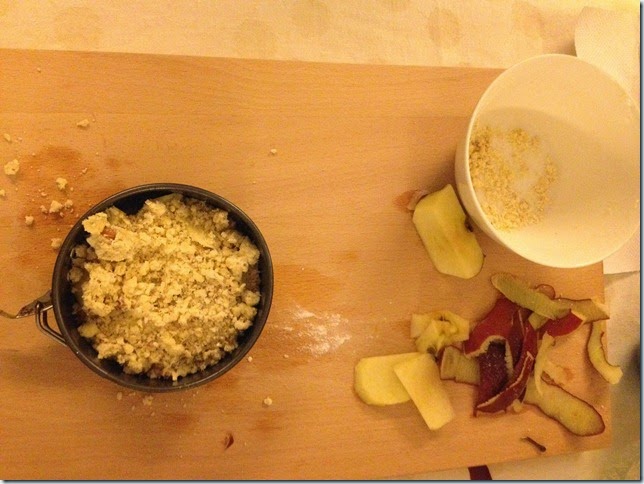 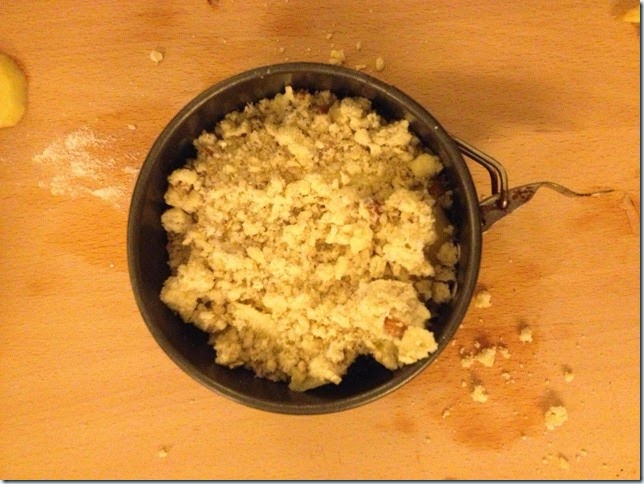 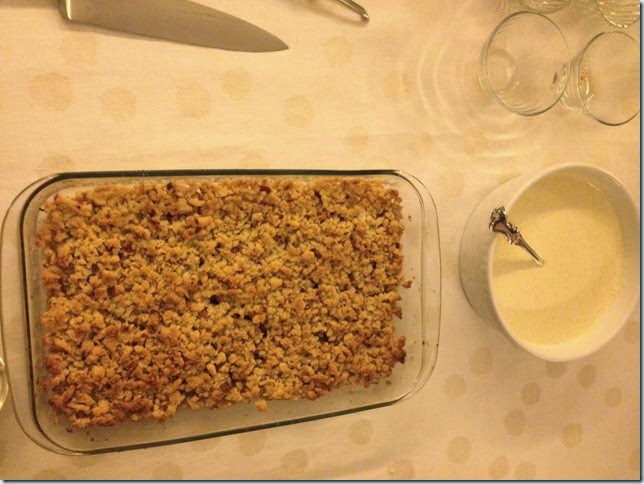 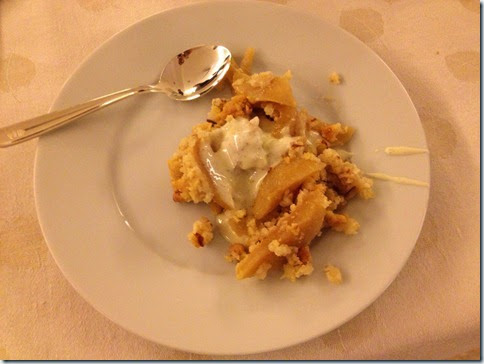 It was a great introduction to the simplicity of Swedish cuisine and left me wondering if all diplomatic evenings are as tasty as this was. 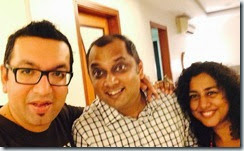 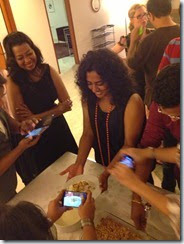 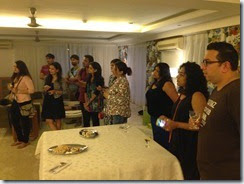 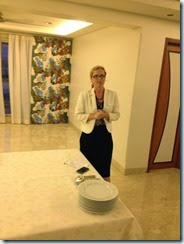 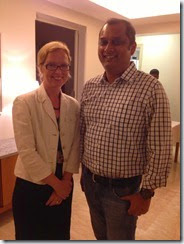 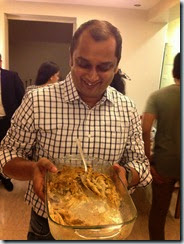 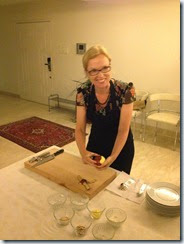 Sassy Fork said…
Smoked Salmon rolls and the Salad look delicious!! Great to have a look at Swedish cuisine!
14 August 2014 at 12:57

Kalyan Karmakar said…
the salad was so so and as they had used regular olive oil and not extra virgin. The salmon rolls were awesome. You went there in Christmas right?
14 August 2014 at 13:14

Sassy Fork said…
Yes....here's the link....
http://thesassyfork.blogspot.in/2013/12/merry-christmasthe-swedish-way.html
We had Glogg,their spiced wine and some awesome cheesecake
14 August 2014 at 16:12