Of being snug and smug in the Thai Pavilion, Vivanta By Taj, Mumbai

Yesterday was a happy day.

Some of you might know that I am writing a book right now for Hachette India. Well, yesterday I finished typing the first draft of the book. Of course there is a long way from when it sees the light of day. Still typing the last words felt great and when I told K she said she wanted to take me out to celebrate.

She asked me to choose a place and asked me if there was any new place that I would like to visit. After tossing up a few options I decided on Thai Pavilion. It is one of our favourite restaurants and we hadn’t been there in a couple of years.

We are always up to a drive to Town at night and it didn’t take us long to reach Cuffe Parade from Bandra via the Sea Link at 9 pm.

Luckily we had booked a table as Thai Pavilion was full. We broke into a smile the moment we entered. Though a 5 star restaurant, it wasn’t empty or snooty. As I told K, the place had the buzz and vibe of a buzzy Bangkok restaurant different from a couple of other five star Thai restaurants that we have been to in Mumbai which tended to be pretty empty. The open kitchen added to the atmosphere.

I saw a grey haired Indian gentleman in a chef’s outfit moving around busily talking to the cooks. A Google image search the next morning told me that this was the legendary Anando Solomon. The brain behind legends such as Thai Pavilion and Konkan Kafe. If I’d known last night I would have definitely gone up and said hi.

The chef’s involvement showed in the superb meal that we had. Our waiter (Praveen according to the bill) was quite articulate and well informed too and helped us make some good choices from the menu.

The only service blips were when someone got a plate of prawns to our table which we hadn’t ordered. And when I spotted some grime and dirt on a spoon on my table. The dishwasher in a five star should be more careful.

We wanted the goose liver from the menu for our appetizer but they were out of stock. A five star executive chef told me recently that goose liver is a code word for the banned foie gras and hence my keenness. So I asked for the sweet and sour pork ribs which I remember loving from a previous visit. Again they were out of stock though they had minced pork and pork chops.

So, guided by our waiter, we chose the prawns with chilli basil from the mains as our appetizer. This was an inspired recommendation. The dish was brought quickly from the wok to the table. The prawns were cooked perfectly with lots of TLC and were brilliantly juicy. The soy garlic sauce enhanced and didn’t enshroud the dish. You would think it was a Chinese sauce by its appearance but the basil and kaffir lime leaf bits thumped up its Thai quotient and the bites of chilli livened up the evening. They don’t focus much on fancy plating or foam here. They keep it simple and instead that they get the food hot to your table and ensure that it tastes good.

K took a bite and exclaimed, ‘this takes me back straight to Cabbages and Condoms (the quaint restaurant in Bangkok)’.

For our mains we started with the John Dory steamed in lemon garlic which was recommended by the Taj Vivanta twitter handle.

K just loved the dish and couldn’t stop saying so. She had it by itself. I had this with steamed rice so found it a bit under flavoured but a bit of nam prik la (chopped chillies in fish sauce) took care of it. I also felt that the fish, like basa, didn’t bring much to the table. I wonder if I would have been better off choosing the cab meat in curry paste. If you like subtly flavoured dishes then this would work for you. Possibly not what I would order again.

Next came the red curry with lamb which is what our server suggested as we didn’t want chicken or prawns which were the standard options. Again a good recommendation as the lamb was very tender. I chose red curry as it is easier to get a good green curry in Mumbai.

The aroma of coconut milk enrobed our table the moment they got the steaming hot curry to our table. The curry was served with rice on the side. The aroma of the coconut milk bore out in the thickness and the sweetness of the curry. K said she missed a bit more of a chilli hit though she liked the dish. I would have liked a slightly thinner curry and a bit more obvious use of fish sauce. Having said that, I must admit that we both loved the curry in absolute terms. K, who has been to Bangkok more recently than I have, found the thickness of the curry similar to what she had had in Bangkok and the pricing similar to mid level restaurants there. What I also liked about the curry was the simplicity. It was just garnished with Thai brinjal and basil leaves and none of the redundant and the very non Thai carrot, cauliflower, bean nonsense that some local restaurants in Mumbai add to Thai curries.

We had gone to Thai Pavilion to celebrate, to feel ‘smug and snug’ as a Facebook friend, Sreyoshi, put it when she saw my photo from there.

Thai Pavilion had delivered. As it always does.

Now let me update my Mumbai restaurant picks and put Thai Pavilion there. 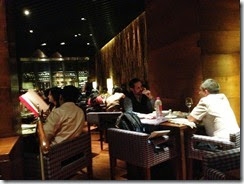 What I noticed about the menu was that each section had a fixed price which made it easy to choose (eg Rs 725 for appetisers, Rs 775 for mains). Our meal for two without alcohol came to just under 3,000 Rs without tips which didn’t seem exorbitant compared to high end Asian restaurants in town. They didn’t charge for the  bottled water that they served without our asking for it.