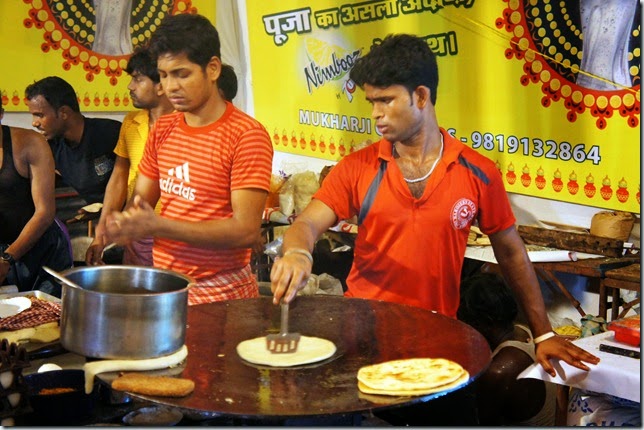 The most wonderful time of the year is coming up for us Bengalis.

It is the festival we look forward to all year. I remember that the months preceding Durga Pujo in Kolkata, during my growing up days, use to be quite frenetic. Braving the crowds as one went Pujo shopping for new clothes to wear during the Pujo. Timing one’s hair cut so that one’s hair would not be too short during the Pujos and yet not so long that one would be pulled up by the prefects in school. The five days of the Pujo would be days of unbridled fun. Hanging around in the building Pujo pandal. Chatting with friends. No studies of course. Taking part in the festivities. Feeling all grown up as one volunteered in various activities such as serving food, making announcements, taking part in the cultural shows. You can read about our building Pujo here. Then, as one grew up, going out pandal happing at night was a big thing. The empty feeling at the end of the five days of festivities after the visarjan really sucked. 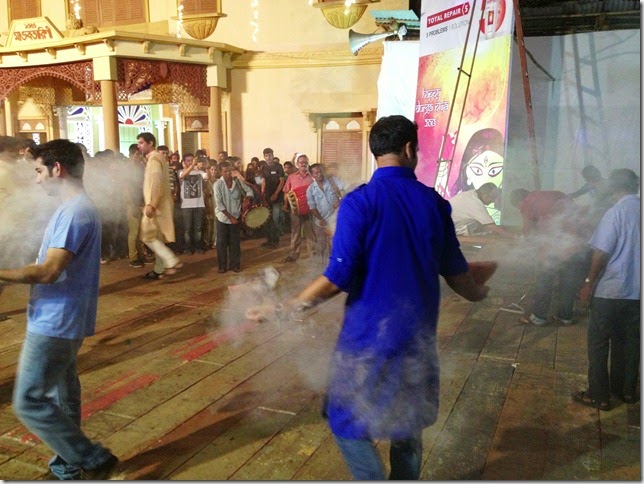 I was like a fish out of water, racked by nostalgia, during my first Durga Pujo away from home in Mumbai. In subsequent years I would head back to Kolkata for the Pujos as do migrant Bengalis from all over the world.

Then something changed. I made Bengali friends in Mumbai. Got to know the wonderful folks who organize the Bandra Notun Polly Pujo and was accepted as one of them. The Bandra Durga Pujo (you can read about it here) become my parar or home pujo. I would hang around there. Take part in the festivities. Chat with folks in Bengali. Help serve the bhog (lunch) in the afternoon. Eat the bhog and the food at the stalls set up. Watch the cultural programmes in the evening. Go for the visarjan. I felt fully at home.

I conducted a Durga Pujo walk in Bandra last year. The idea was to give people an insight into what Durga Pujo means to us Bengalis. And to try out the lovely food on offer. It went off very well, and given requests from folks to repeat it, I thought of doing one more this year. 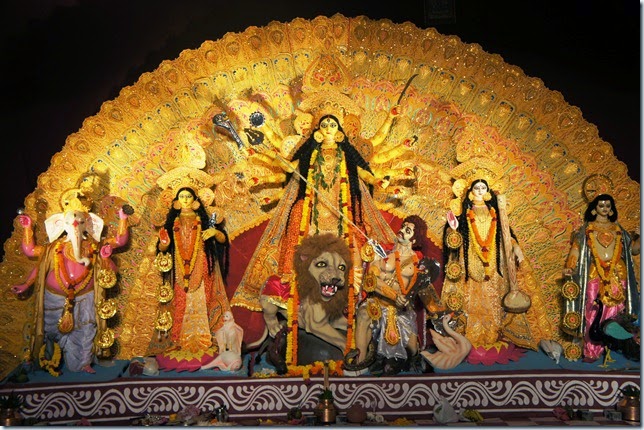 So here’s the plan.

We first go to the Bandra Durga Pujo. Over there we get to see what happens during the Durga Pujo. Get to know about the customs and traditions associated with it. About what happens in Kolkata during the Pujos. And in Mumbai too. Mumbai has quite a few pujos. Starting with the one at Tejpal Park which is probably the oldest to the one at Lokhandwala which is the most glamorous and Shivaji Park which has one of the biggest. The Pujos in Mumbai are of course a lot more spread out than in Kolkata. In Kolkata a Pujo ‘walk’ can cover multiple ones provided you are willing to brave the crowds.

In Mumbai, it is slightly different. We can cover only one Pujo in a walk. But we can follow that with some pet pujo (colloquial for eating).

The first stop will focus on Bengali street food. The mutton rolls, fish fries, egg based Moghlai parathas and vegetable chops. Food from the stalls that are set up at the Bandra Durga Pujo which serve fairly expensive fare which cash in on on the nostalgia factor. You will find the food section of the Pujo ground packed with people. In Bandra, it is strategically placed before the pandal where the actual religious festivities happen. For Bengalis food is a religion after all. Here’s a post on the food at the Bandra Durga Pujo. 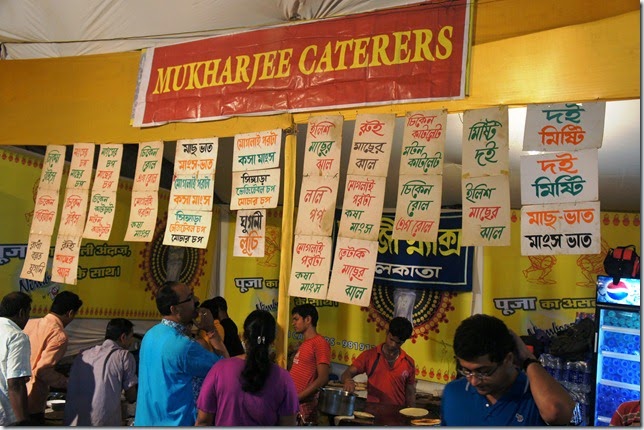 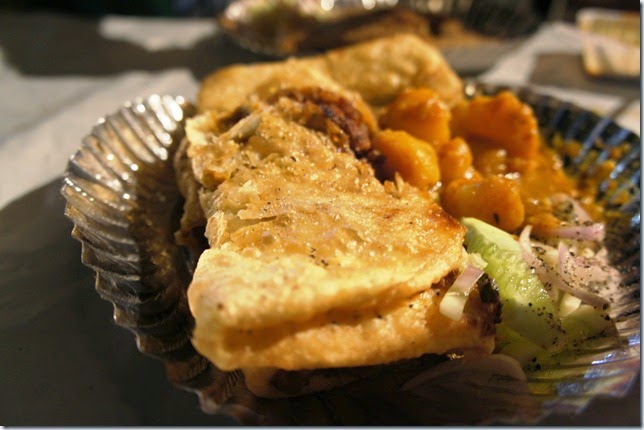 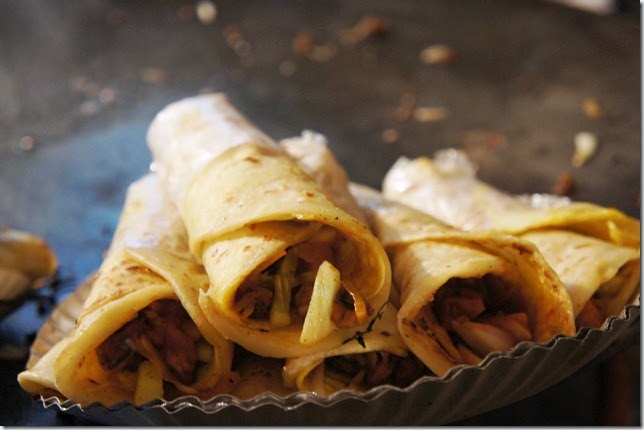 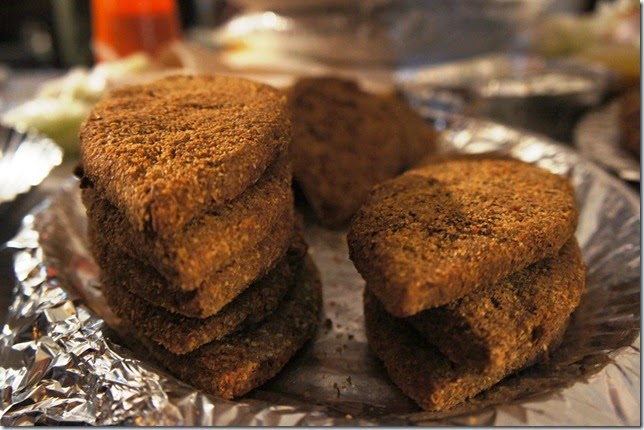 There is a more religious part to the Pujo food of course.

There is the proshad (a mix of fruits and sweets) which are offered to the Goddess and then to devotees who come to the Pujo. The food is considered to be blessed.

Then there is ‘bhog’ a community lunch served in the afternoon to those who come to the Pujo. It is served free of cost. Is vegetarian. Is much sought after. Consists of dishes such as khichudi, labra (a vegetable), vegetable fries and sweets. People queue up for this while the volunteers serve it. I also try to join in in the serving. Feels absolutely great. 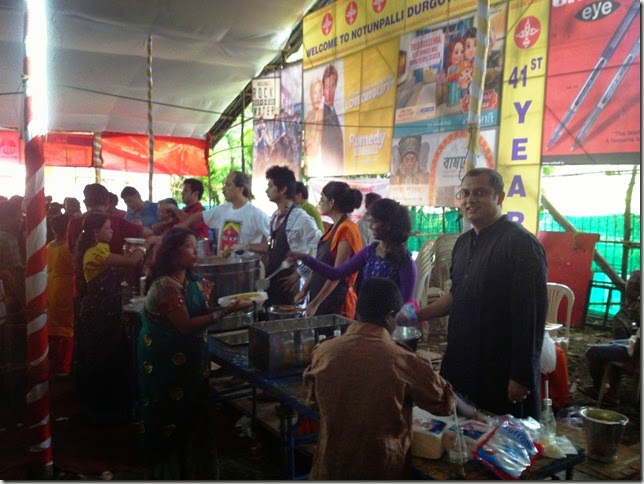 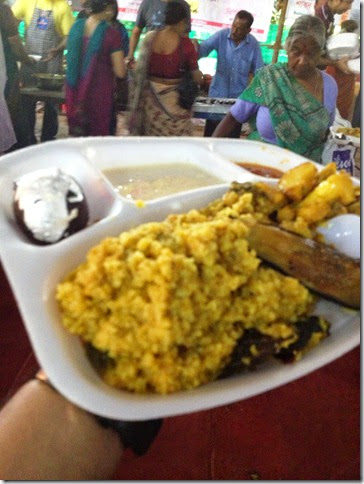 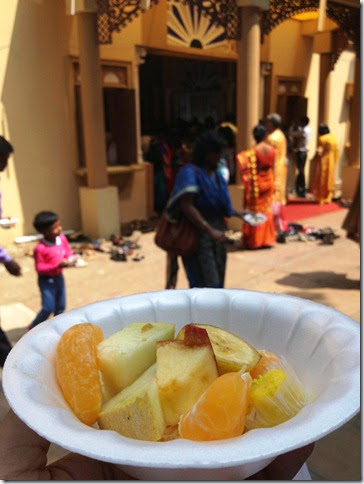 The problem is that Durga Pujo this time falls in the middle of the week. If we do a walk in the afternoon people won’t be able to make it. So the walk is in the evening and mid week. But don’t despair. Bong Bong, the neighbourhood Bengali restaurant in bandra, will come to the rescue as it did last year. At Bong Bong we will be have a special pujor bhog (veg) meal to follow up our street food fiesta at the Bandra Durga Pujo. A specially curated Pujo Bhog meal of khichudi, bhaja, labra and mishti will be made for us as we sit down to eat over a proper Kolkata styled adda. 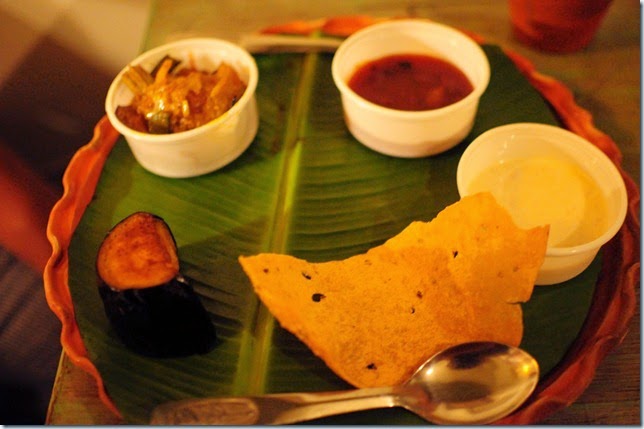 Adda is a big part of the Bengali ethos. It means endless chats, gossip and discussions which range from topics such as Russian politics to Croatian cinema to Argentinian club football and is normally fuelled by endless cups of tea and fritters.

In between the two we will stop at Sweet Bengal to get a taste of the much coveted Bengali sweets. Mumbai is full of sweet shops offering ‘Bengali sweets’. This is your chance to taste the real deal. 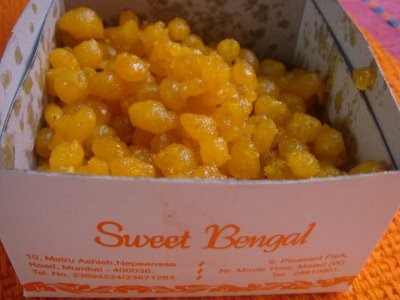 So join me in on the Finely Chopped Durga Pujo walk and allow me to introduce you to our culture and food in a uniquely Mumbai Bengali way.

The walk: Three stops. One at the Bandra Durga Pujo where we get an insight into the Durga Pujo festival and what it means to Bengalis and follow it up with Kolkata styled street food dishes (non veg) from the food court set up by Bengali caterers and restaurants.  This will be followed by a sweet shop stop to try out Bengali sweets. Then we move on to a Bengali restaurant to have a Pujor bhog (veg) Bengali dinner over an adda (chat) on things Bengali.

To get an idea of what happened on the last Finely Chopped Durga Pujo walk, check this link

So see you at the Pujos folks.

Write in at k.finelychopped@gmail.com or tweet me at @finelychopped or write to me at the Finely Chopped Facebook page if you want to join. Given limited seats please don’t change your minds. Looking forward to seeing you there