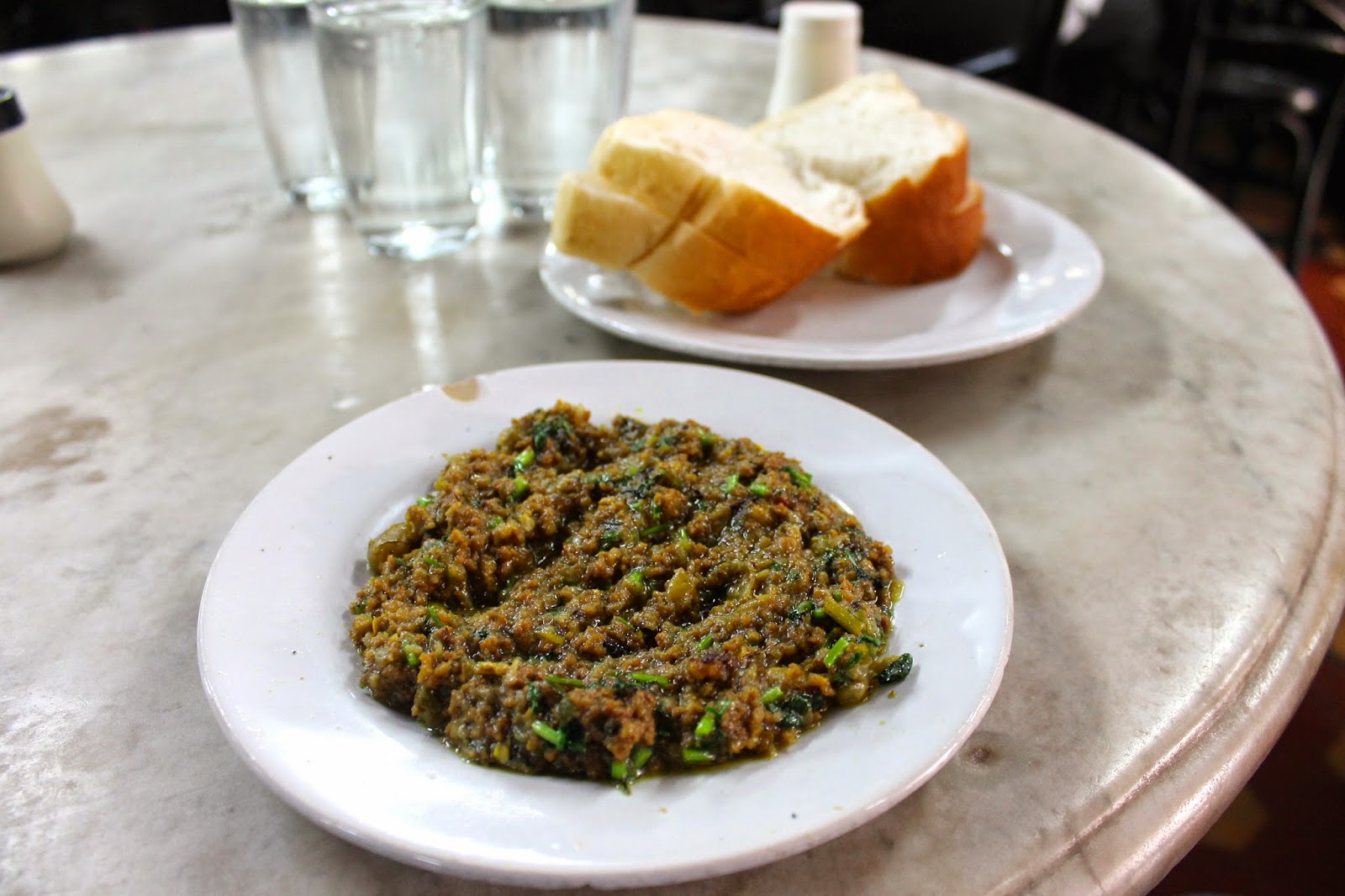 The iconic kheema (minced mutton) of Olympia in Colaba comes into the picture whenever traditional breakfasts in Mumbai are discussed.

Colaba in South Mumbai is not where you will usually find me at breakfast so the kheema at Olympia has eluded me for years. I have been to Olympia in the afternoon though and have had quite a few lovely biryani and mutton fry lunches there. Yesterday I had to go to Colaba early on work and took the opportunity to step into Olympia.

It was about 9 am and the Causeway still looked sleepy. The close to hundred year old (est in 1918 I am told) Olympia opens at 7 am. 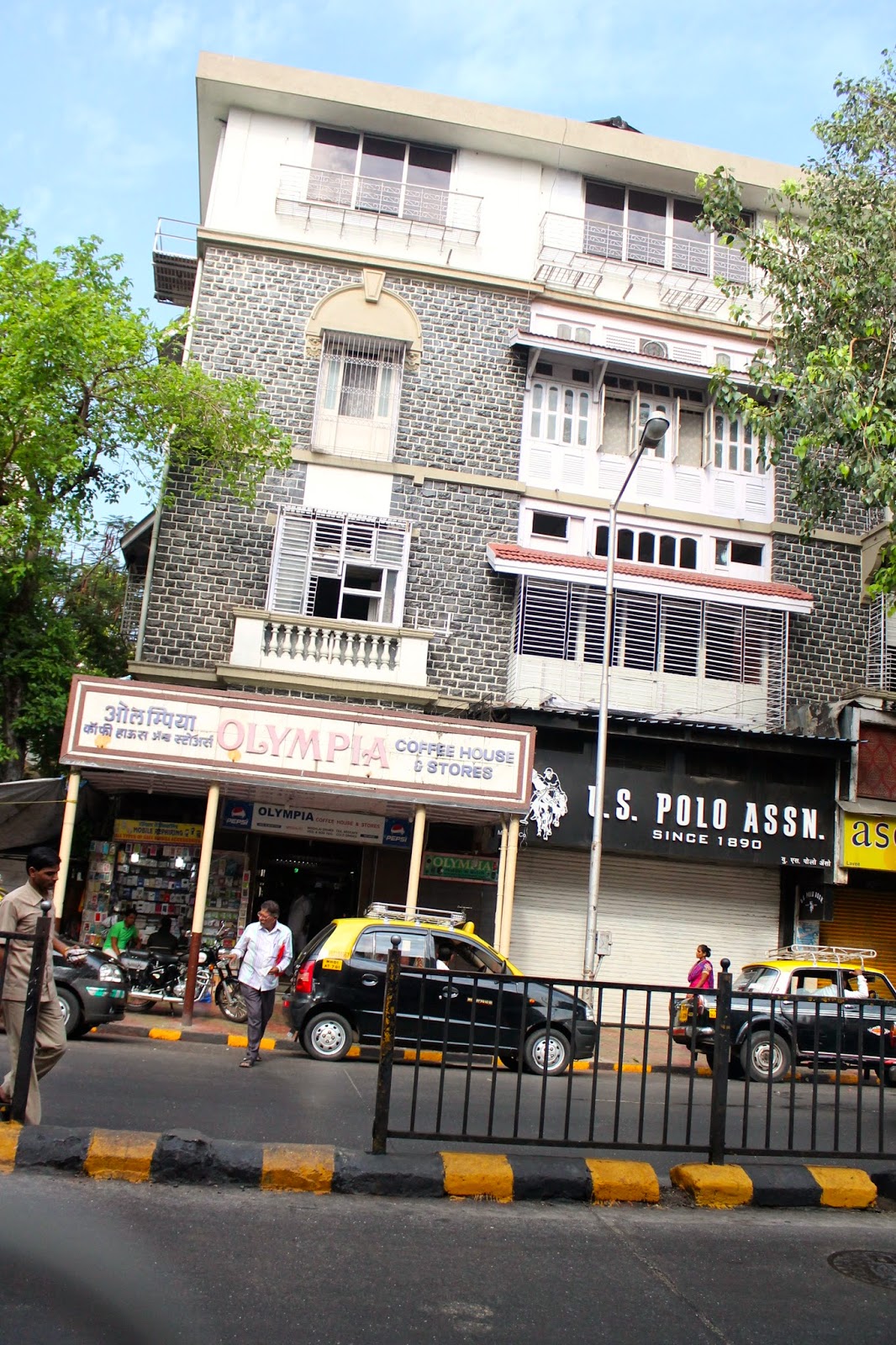 We parked in front of Leo’s and I crossed over. The upper aircon section was shut and only the downstairs Irani café like section was open. The place was reasonably full. People were walking in and sitting down confidently. Sharing tables here is the norm though I got a table to myself. A waiter quickly came and cleaned up the marble topped table. On each table a few glasses of water were kept and a plate with slices of lime and whole green chillies. This section is not air conditioned but thanks to the high ceilings, slowly cranking fans and the morning air, it was pretty pleasant inside. 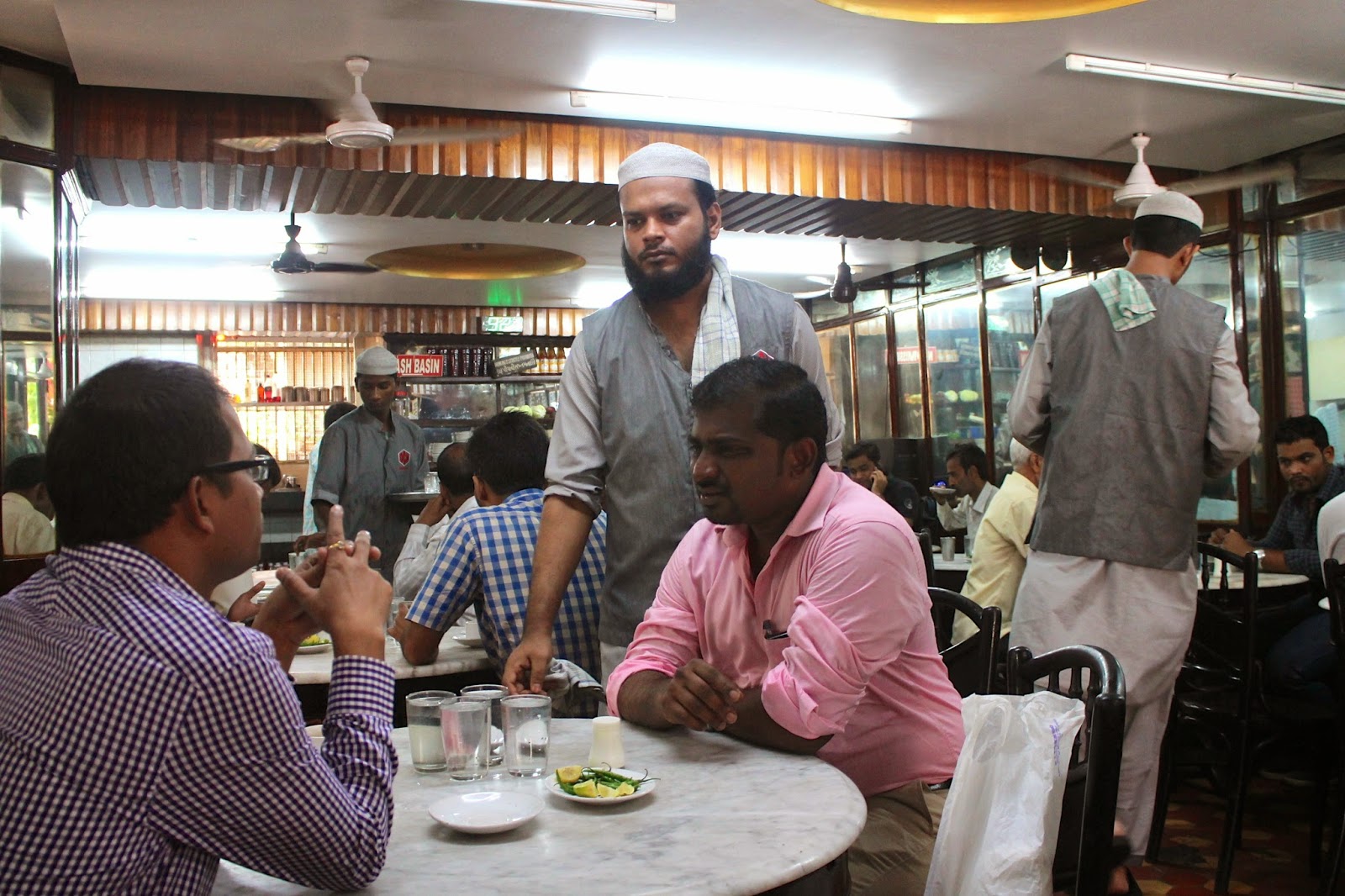 Most people around me seemed to be regulars. They placed their order with a sense of familiarity. Everyone was having kheema. Some with soft sliced bread. Some with chappatis.

I asked for the menu. Possibly the only person to do so in the restaurant. There was no breakfast section in the menu! So I asked the waiter for options.

I asked for a kheema (mutton/ goat mince) and bread and waited.

I saw that others who placed their order after me got their food faster. Turned they had asked for plain kheema and that was brought out instantly. 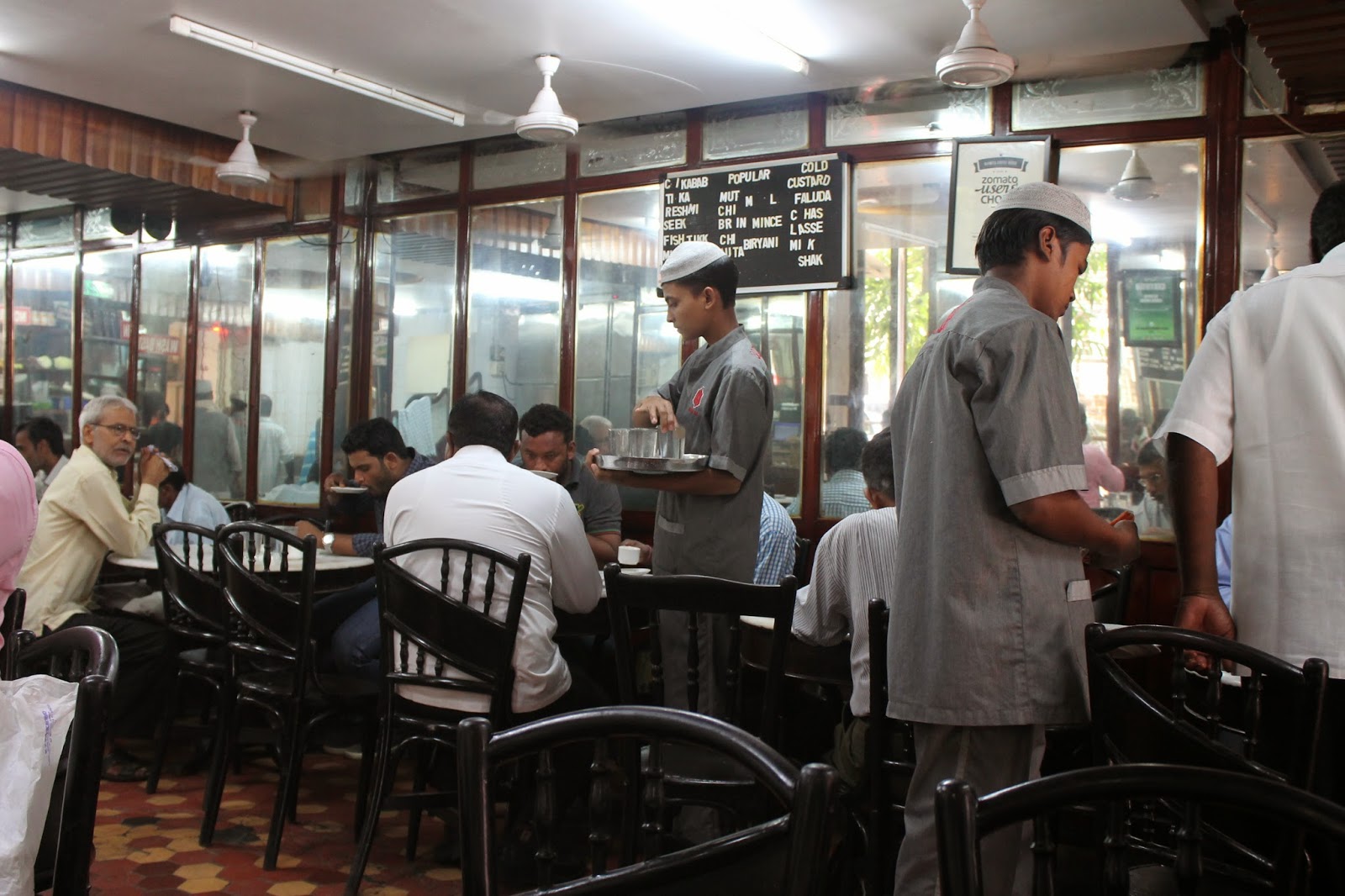 When I mentioned this later to Jamshed Uncle, who has been going to Olympia since his school days seventy years back, he said that the kheema is served like in an 'assembly line McDonalds here' (his words). 'It is made continuously and brought out the moment someone orders it'.

My kheema fry was brought to me after a less than ten minute wait. I realised that the kheema fry was regular kheema tossed in greens…coriander, mint leaves and possibly some ginger. I was earlier worried that the dish would be too spicy to handle in the morning. Turned out it wasn’t. In fact there was a faint sweetness to it. The dish tasted very pleasant. They don’t give you spoons here unless you ask for it. You mop up the minced meat with the really soft white bread or with rotis. The mince was pretty smooth. On asking the waiter told me that the mince is machine ground and not hand ground. ‘It’s too much kheema to grind by hand,’ he said. The dish looked pretty as a picture.

I must point out that the porcelain white plates at Olympia were really clean unlike the yellowed formica plates used in Irani restaurants like Ideal Corner & Military Cafe. This makes such a pleasant difference. 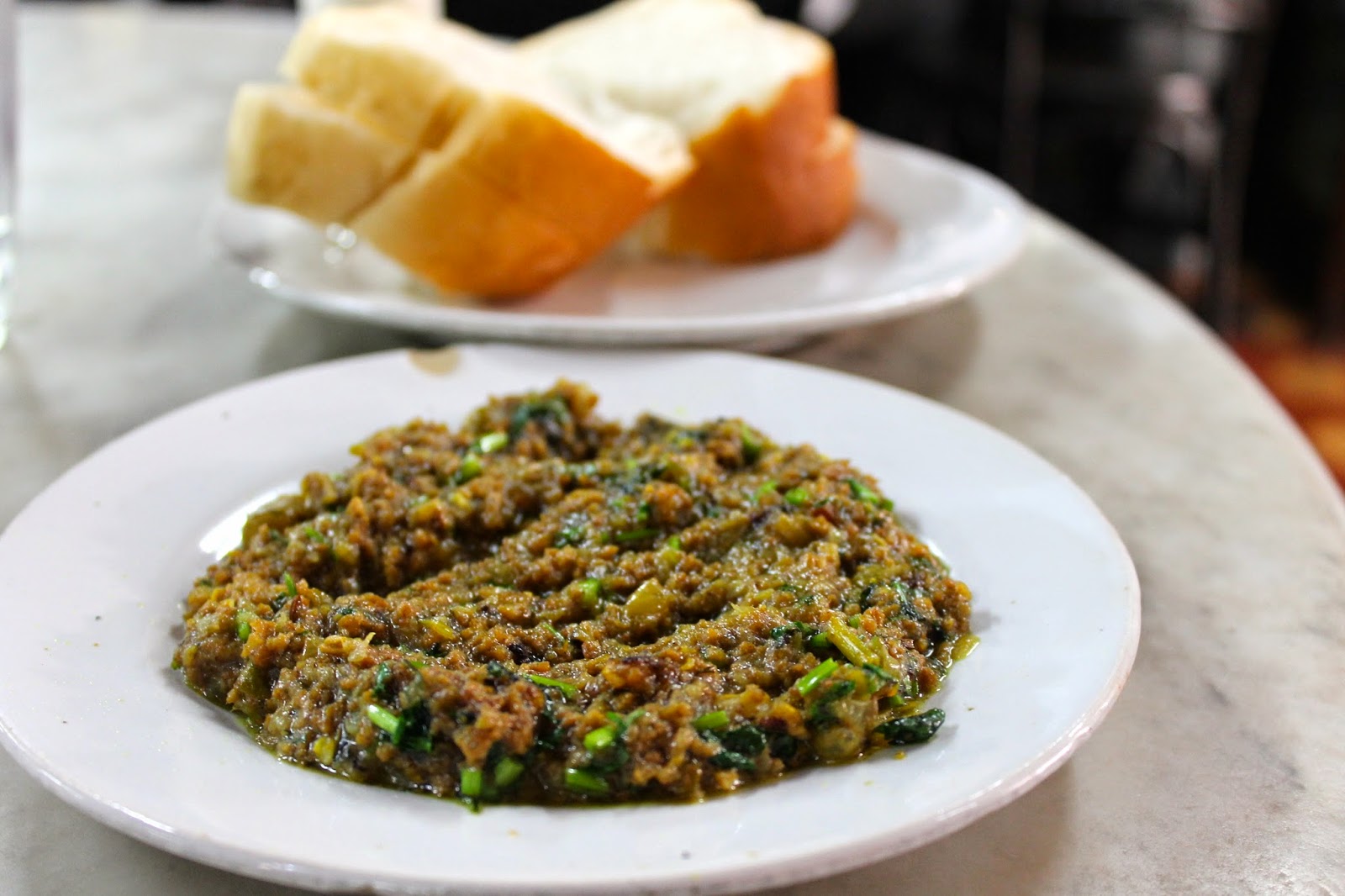 The kheema with bread was nice and satisfying. Not a life defining, knock out taste to be honest. A very comfort dish though. Almost like a nice home cooked dish. The kheema and bread turned out to be a good start to the day.

Now, this is where I should have stopped.

Then I thought I will order something more to give you an idea of the range. So I went for an egg burjee (masala scrambled eggs).

What followed taught me a lesson. If a restaurant is famous for a dish and if everyone around is ordering that dish, the kheema in this case, then stick to that.

The burjee was completely unseasoned and adding salt to it didn’t salvage the dish. There were raw bites of turmeric powder which was not very pleasant. It had only choillies in it. No onions or tomatoes. The texture of the egg too tight and inert. Not the best work of the cook. The egg burjee at Candies is way better. 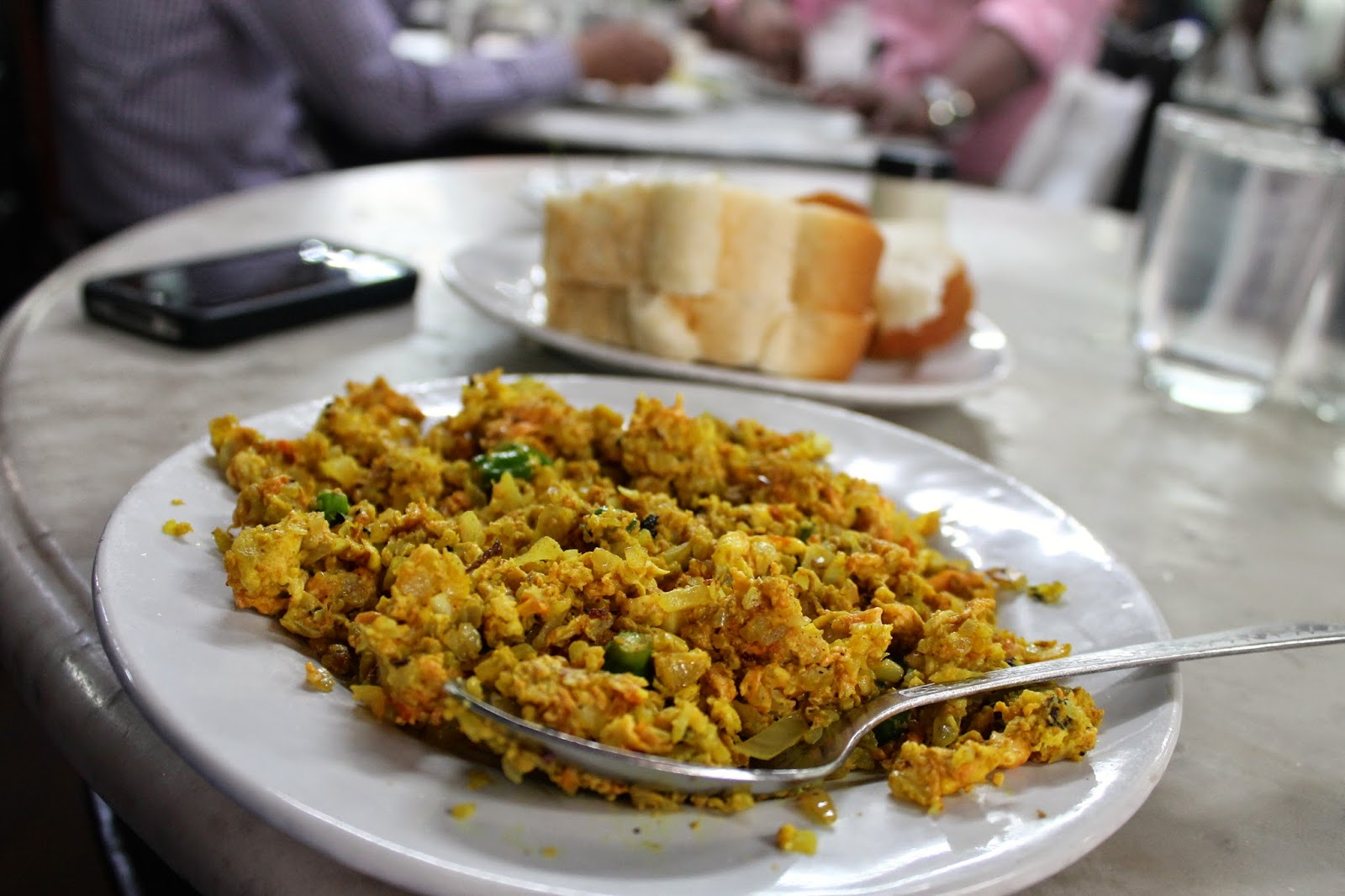 Luckily I had a bit more of the kheema left and had that to finish the morning on a good note.

My breakfast came to about 90 Rs and would have been Rs 50 (less that a dollar) if I stuck to the kheema fry. I reckon the plain kheema is even cheaper.

The kheema experience at Olympia got me thinking. Mumbai doesn’t have too many traditional breakfast options. There are of course the vada paos at the railway stations which commuters grab on the way to work. In Colaba itself both Leopold’s and Mondegars offer breakfasts. More Western there though would be my guess. Then there are the South Indian places in Matunga and a few Marathi joints in Dadar such as Prakash and Aaswad (which opens at 10 am though). Pancham Puri perhaps? Some people of Facebook mentioned Sarvi and Military Café. I am told that Social in Colaba stocks some traditional breakfast dishes. Then there are the Irani bakeries like Yazdani and Kyani (someone mentioned) for brun and bun maska and chai.

Are you aware of any other traditional breakfast options in Mumbai? Which are your favourites? Please do write in. Would love to try them out.

Nikunj M said…
1. Ladoo Samrat in Chinchpokli is a great to try out for Maharashtrian Breakfast. Must Try - Thalee Peeth, Kothmir Vada & Batata Vada. Down it with Kokam Sharbat or Piyush.

Anurag Mehrotra said…
Olympia Coffee House is my favorite since childhood. Love their keema, biryani, stew and my favorite is their brain curry. You must try it the next time you visit.
29 October 2014 at 16:42

Nazneen said…
You should totally try Kyani! Chicken puffs, chai, bun maska, and even the sandwiches are lovely!
30 October 2014 at 20:59

Kalyan Karmakar said…
I have the mava cakes from B Mervan but must try ladoo samrat
31 October 2014 at 15:40

Kalyan Karmakar said…
My first taste of Olympia was the brain masala. I was visiting a friend who ordered it home. She lived quite a wild existence and having it out of an unwashed plate at home killed it for me
31 October 2014 at 15:41