And we turned seven on the 7th

My friend, Kashi, messages me at the beginning of October. The gist of the text goes something like this. "Hey, it's October. Isn't that anniversary of when you started to blog? Congratulations and all the best for the future"

I read this and scramble to the Blogger dashboard and realise that the day had come and gone without my realising it!

This time I made a note of the date. 7th of October, 2007. That's when I wrote my first post. The date should not be difficult to remember. 7th is my birth date too. Now just have to remember the October bit. Otherwise good old Kashi is there.

Which also means that the blog is 7 years old! Wow, that's quite a bit of time. Don't know how the years went by. Once I started blogging I just couldn't stop. It seemed the most natural thing to do.

People often ask me how it all began. I am not sure if I have shared the story here. Here goes...

Even before I began blogging I was the guy in office whom people would ask for restaurant suggestions. I was also cooking in earnest those days and would occasionally share recipes with people on mail. Orkut was around  and I would enter into food related discussions on some groups there. Yes, I was already talking about food even though not blogging about it.

One thing which bugged me then about the  food content that I would come across in mass media - press or TV - was that most of it read like sugary advertorials. I would often go to places to eat and then tell K about gaps in service, quality of food served which I had observed. I was upset that no one seemed to talk about this.

Finally she got fed up and suggested that I start 'this thing called a blog' and rant there. She found out how to open a blog from a friend of her's, who wrote one, and opened a blog for me.

K named it Finely Chopped. The idea was to have a space where I could vent about food experiences that turned me off.

My first few posts were on that - bad airline food, wrongly made pesto sauce and so on.

Then slowly the blog became a place for me to write about my experiences on food. I was heavily influenced by content I saw on international TV channels especially after the launch of TLC. It was the equivalent of suddenly getting to see European football on ESPN after years of watching the Indian league on DD. My eyes opened. I realised that food writing could come from the heart and needn't just have to read like product plugs. My lodestar was, and is, Anthony Bourdain, whose off the cuff and from the heart style of narration appealed to me.

From restaurant and service cribs I broadened horizons to write about places I would go to eat in, people I met in the world of food, places I travelled to, my experiments in the kitchen...I began documenting the food side of my life like a wide eyed child.

Somewhere down the line Finely Chopped stopped being an angry young blog and became more a diary of my life...the food side of it.

Regardless of what happened in life...work pressure, office politics, existential angst and ennui, bad back, late nights, travel, upset tummies, cholesterol worries...I kept writing. In an ever changing life, blogging remained my one constant. It was much more than a refuge...it was the centre of my life.

Blogging changed the way I looked at food, people...I learnt more, I broadened my horizons...I began to look for new experiences. I met new people. Made loads of friend. In fact last evening we celebrated Diwali at home with friends I have made through the blog. Ordered food from someone I knew through the blog. 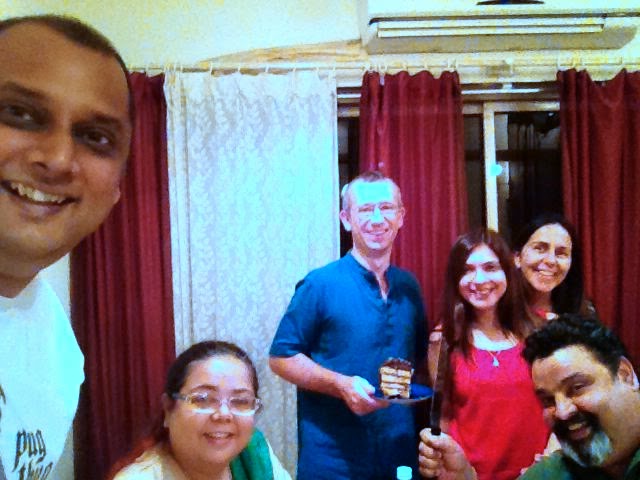 Lots of tangible things began to happen because of my blog. I got to travel to faraway lands starting with Barcelona and London. Got writing contracts from magazines and internet sites. Got to do television, the biggest high there was anchoring a segment on the Travel Channel USA, where the show aired on the same day as Bourdain's. Got featured in articles on blogging. Won the Food Bloggers Association of India award. As the years went by, and social media grew in importance, I got an opportunity to be associated with brand marketing campaigns. Met luminaries from the world of food....food bloggers, writers, chefs, hoteliers...all of whom have been very kind to me. Spoke in social media and blogging meets. Got to know Mumbai better.

Through friends I got the idea of starting food walks and that has been an amazing experience.

Then the book contract happened thanks to a blogger friend who introduced me to an editor.

Increasingly the world of food became the centre of my life and I decided to make that my focus on the work front too. Exploring new areas in an uncharted and virgin space.

These have been interesting times. Trying out new things, having new experiences, travelling because of food, making new associations.

It's a great time to be a food blogger and to me, no matter what I do, that remains my core identity.

The friends I have made through blogging are most close to me.

The no holds barred support I get from K the most dear to me. That's what gives me an opportunity to try my hand at doing what makes me happy.

I don't see any seven year itch happening here. I am going to keep blogging no matter what.

Hopefully you will continue to partner me through the ride.

Anniversaries From the hip social media The world of blogging

Nandita Iyer said…
Good luck and best wishes for many more years of fun filled explorations and sharing!
24 October 2014 at 14:48

Anjali Koli said…
What a journey! Here's wishing you many more much experiences so that we get to read your stories.
24 October 2014 at 22:56

Pinku said…
this post brought back so many memories. Sitting in my Mumbai office reading your blog and then trying out your chicken rezala recipe at home :)

7 years is indeed a long time - congrats on staying the course through everything. Am so proud of what your have achieved thru ur blog.

Kalyan Karmakar said…
thank you so much Priyanka. Thanks for all the support through the years and congrats on turning 8
27 October 2014 at 12:23

Home Cooked Oriya Food said…
i have been reading through most of this time tooo... remember that chicken rezala post a above! cant believe its 7 years! Congrats!
28 October 2014 at 07:58

Unknown said…
Hey Kalyan, the pleasure is mine :-) ... Now that u've told me the date as well, I will definitely remind you on the day if not before :-) . On your 7 years journey, apart from your efforts and enthusiasm, what is more commendable is the fact that you did not leave this mid way after the initial excitement. Am sure you still write with the same excitement they way you did when you started off and hats off to that. Congratulations on completing 7 years and as I had said to you before, there is a long road ahead, so Good Luck for the same :-)
28 October 2014 at 11:21

Siddharth Moghe said…
wow, not to sound cliche, my interest was more or less cajoled by similar events in life ( service issues in restaurants, inconsistency in food served etc ) though haven't had much experience as much as your spectrum shows - still a novice, still learning ...still absorbing....

Kalyan Karmakar said…
thanks for your support from the beginning Somoo. Great to see you here again
31 October 2014 at 15:44

Kalyan Karmakar said…
thanks for all the support Kashi specially when I was starting out. Here's to more meals together
31 October 2014 at 15:44

Kalyan Karmakar said…
That's very kind of you Siddharth. You incidentally share the same name as my brother. Keep blogging. It's fantastic
31 October 2014 at 15:45