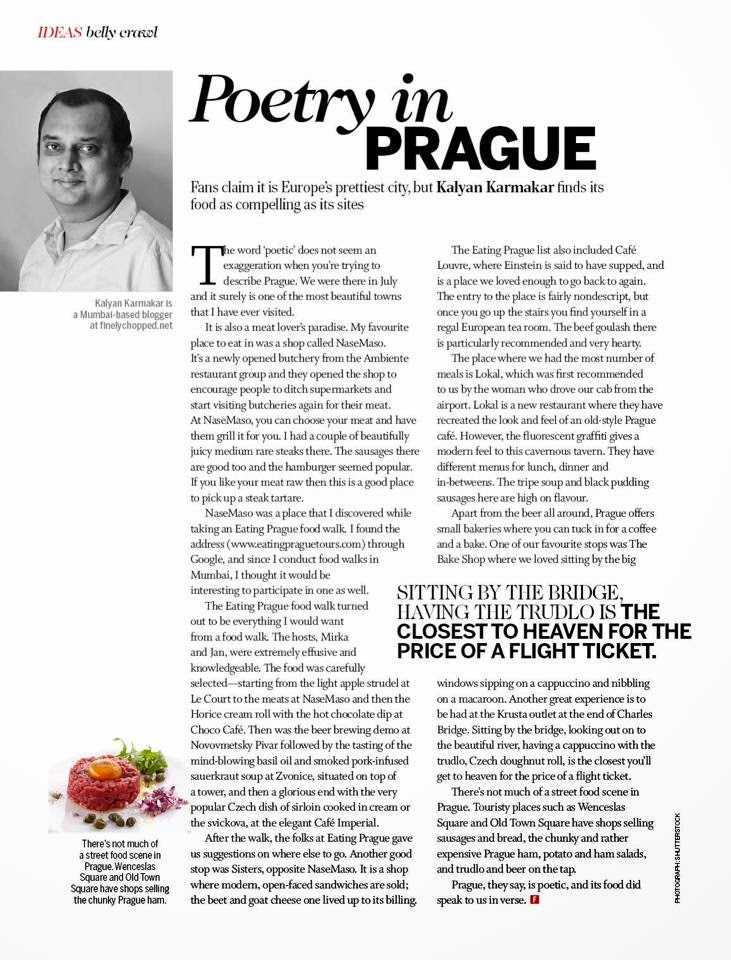 This is my latest article in Femina.

The original text is as follows:


The term ‘poetic’ does not seem as clichéd when you land in Prague. We were there in July and it is surely is one of the most beautiful towns that I have ever visited. Pretty as a picture.

It is also a meat lover’s paradise. Each meal there was quite memorable for me. My most favourite place to eat in was a shop called Nase Maso. It’s a newly opened butchery from the Ambiente restaurant group and provided meats to the Ambiente restaurants. They opened the shop to encourage people in Prague to ditch the super markets and start visiting butcheries again for their meat.

At Nase Maso you can choose your meat and have them grill it for you. I had a couple of beautifully juicy medium rare steaks there with the smiling lady at the counter guiding me on the cuts. The sausages there are pretty good too and the hamburger seemed popular. Or if you like your meat raw then this is a good place to pick up a steak tartare.

Nase Maso was a place that I discovered while taking an Eating Prague food walk tour. I found their address ( www.eatingpraguetours.com) through a google search and after conducting food walks in Mumbai myself felt that it would be interesting to be a participant in one.

The Eating Prague food walk turned out to be everything I would want from a food walk. It was a small group and we walked together like friends. The hosts, Mirka and Jan, were extremely effusive and knowledgeable. The weather in Prague allows you to walk and we saw quite a bit of the city. The food was carefully selected and were all stops which were not in tourist books. Starting from the fresh and light apple strudel at Le Court to the meats at Nase Maso and then the horice cream roll with the alluring hot chocolate dip at Choco Café, the beer brewing demo at Novovmetsky Pivar and then the tasting of the mind blowing flavour packed basil oil and smoked pork infused sauerkraut soup at Zvonice which was on top of a tower and then the glorious end with the sirloin in cream dish, svickova, at the very elegant Café Imperial, each food stop was a gastronomic delight.

After the walk, the folks at Eating Prague gave us suggestions on where else to go. We went back to Nase Maso twice. Couple of other good stops were Sisters, opposite Nase Maso. It is a shop where modern open faced sandwiches are sold and beet and goat cheese one lived up to its billing. We also went to another Ambiente group run place, Cestre for a some great steak and trout, though I must say that the steak in humbler Nase Mase was more tender and seasoned better. The Eating Prague list included Café Louvre which is a place we loved enough to go back again during the trip. It’s a café whose patrons included Einstein among others. The entry to the place is fairly nondescript but once you go up the stairs you find yourself in a regal European tea room. The beef goulash there is particularly recommended and very hearty.

The place where we had the most number of meals is at another Ambiente owned place called Lokal, which was first recommended to us by the lady who drove our cab from the airport. Lokal is a new restaurant where they have recreated the look and feel of an old style Prague café. However, they have not compromised on contemporariness and the fluorescent graffiti gives a modern feel to this cavernous tavern. They have different menus for lunch, dinners and in between. The tripe soup and the black pudding sausages here are  high on flavour and the butter seared carp reminded me of the Bengali rui maach bhaaja.

Talking of the Ambiente group, if you are feeling very posh then you can try their Michelin starred Degustation restaurant. It was recommended by many to me but I just found it too expensive for food.

Apart from the beer all around, Prague offers small bakeries where you can tuck in for a coffee and a bake. One of our favourite stops was The Bake Shop where we loved sitting by the big windows sipping on a cappuccino and nibbling on a macaron (though I must say that our Pooja Dhingra of Mumbai’s Le 15 Patisserie makes better macarons). Another great experience is sitting by the outlet of the bakery chain, Krusta, at the end of the Charles Bridge. Sitting by the bridge, looking on to the beautiful river, having a cappuccino with local Czech doughnut roll-like dessert, trudlo, is the closest you can come to heaven for the price of a flight ticket.

There’s not much of a street food scene in Prague. Touristy places such as Wenceslas Square and the Old Town Square have shops selling sausages and bread, the chunky and rather expensive Prague ham, potato and ham salads, trudlo and beer on the tap.

I did see a smattering of Indian restaurants in Prague.

We stayed at the Maximilian Hotel for about a week. The room was not luxurious but quite clean and comfortable and they gave us a gold fish to keep us company. The staff was very helpful. The location fantastic. The breakfast buffet was pretty nice and I would strongly recommend the hotel.

If you are into history then take the tours run by the Jewish owned Whitman Tours to the Terrezin Concentration Camp. We did a day trip to Vienna but given that we spent barely three hours in the city and nine hours in a cramped bus it is not that good an idea, unless eating a great schnitzel and sacher torte makes you as happy as it did me. Also don’t go on a Sunday like we did as everything is shut.

Prague, they say is poetic, and its food did speak to us in verse.