on December 07, 2014
I had a bad back last weekend and the curse of the bad back has hit me again this weekend.

However, I wanted to share a great experience I had this Saturday. So I thought I will blog on the iPhone even if I can't sit with the laptop.

There were three authors whose books on food had inspired me to start blogging years back. There was Bourdain & his Kitchen Confidential and A Cook's Tour. Then Vir Sanghvi with his Rude Food whom I got the opportunity to meet him recently. And there was Chitrita Banerjee with her 'Hour of the Goddess' and 'Eating India'.

Today (Saturday) I got to meet the elusive Mrs Banerjee and had a full fan boy afternoon. Her writing has had a big influence on how I try to write and meeting her was a dream come true.

I had gone to the Times Lit Fest 2014 being held at Bandra's Mehboob Studio. I went to attend a panel on the spread of regional food with a focus on Bengali food. The panel was moderated by Vikram Doctor, one of my favourite food columnists, whose encyclopaedic knowledge food and endearing praise are something one aspires to. In the panel was Anjan Chatterjee, an articulate speaker, whose Oh Calcutta was the harbinger of Bengali restaurants in Mumbai. The reason one doesn't feel hungry in Mumbai despite being a probashi or expat Bengali. There was journalist Nilanjana Roy too on the panel.

And Chitrita Banerjee. To be honest she was the reason why I went to see the panel discussion.

The hall was packed and one witnessed what turned out to be quite a passionate and engrossing discussion at the end of which the Bengalis in the panel declared in the middle of Mumbai that Bengali food is the best cuisine of all. Nilanjana and Mrs Banerjee raised some important questions on 'authenticity' of dishes in a migratory world where people are moving and getting exposed to different cultures and circumstances. Mrs Banerjee lamented about the lack of awareness of regional Indian cuisines outside of India and Nilanjana spoke of the need to take Indian food writing into the mainstream international literary world. Anajan Chatterjee spoke of the 'zid' (obstinate passion) required to push a regional restaurant and the challenges in winning over a non-Bengali audience. He admitted that he made a lot more profit through his Chinese chain, Mainland China, than through his Bengali restaurants and that he used this to support his Oh Calcutta business. Vikram Doctor gave the example of bhoot jholakia and the recent rise of North Eastern cuisine and said that regional cuisines need flagbearer dishes/ ingredients to act as ambassadors for them. For Bengali cuisine this would be 'machhed jhol' said Banerjee wryly.

I found it interesting that Vikram chose Bengali of all cuisines as an anchor for his session on regional food. Given our passion for food and the chip on our shoulders while talking about it, it made full sense I guess and the packed house bore it out. This was the second 'Bengali' session at the Times Lit Fest. The earlier one was about the Bengali 'angst'. It was quite a boisterous session from what I heard and I wished I caught it. I did later cheekily ask author Neel Mukherjee, who wrote 'The Life of Others' which I am reading now, and was a part of the panel, why his book was full of people starving. He sportingly said some people were eating in it too!

Coincidentally while there were two Bengali themed panels I don't think there was any other panel in the Lit Fest which focused on any other community! Though us Bengalis were rather disgruntled by the fact that there is only vegetarian food served in the Times Lit Fest food stall. The key attraction of the Kolkata Book Fair after all is the fish butter fry in the Benfish stalls. No wonder people made a beeline to the Good Luck cafe outside Mehboob Studio for shwarmas and keema at the Times Lit Fest.

After the panel got over I got to spend some time chatting with Vikram and Mrs Banerjee. I got my copy of 'Eating India' signed by her. I always had this vision of Mrs Banerjee being like a kind mashi (aunt) and that's exactly how she is right from the twinkle in her eyes to her charming smile. Her perspective on Bengali food, and her ability to connect myriad cultural dots, had me in a spell.

Veteran food writer, Antoine Lewis joined us and I shamelessly got him to take loads of pictures of Mrs Banerjee and me.

So I've met Vir Sanghvi and Chitrita Banerjee. Now one can only get greedy and hope that someday I'll meet my pole star, Anthony Bourdain too.

The day was also noteworthy because I got to meet Tushita Patel for the first time since 1995. She was my first ever boss in my first ever job when I was a sub ed for a month before I joined B school.

Quite a day indeed. Now am just hoping that this blasted backache goes. 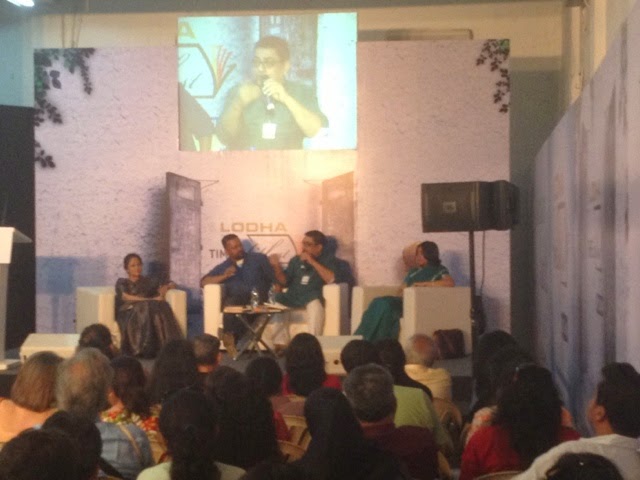 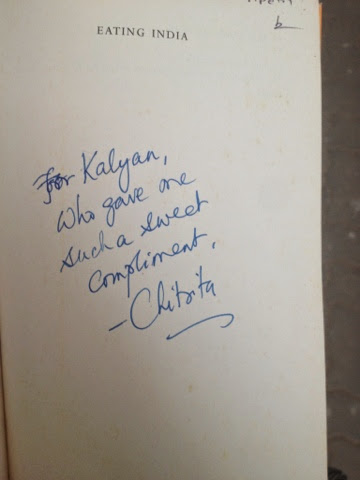 suvro said…
>"the Bengalis in the panel declared in the middle of Mumbai that Bengali food is the best cuisine of all."

So what was the argument they made to back this bold statement?
After having cooked several different cuisines at home (from India, and from many other countries), and tried even more different cuisines in Los Angeles (and other countries - most recently in Italy, and Prague), I also have come to conclude that the daily Bengali diet is truly well balanced and varied and flavorful. But for them to claim it was the "best" - it would be interesting to hear their logic!
7 December 2014 at 10:39

shreya said…
Awesome one. Loved it. Bengali's are ultimately Bengalis. Proud to be a Bengali.
8 December 2014 at 10:48

ratna said…
Lucky you Kalyan. Chitrita's books are my favourite too. Hope you feel better soon
15 December 2014 at 09:17

Anonymous said…
You are a start yourself Karmarkar.
the way you weld your pen under ( or over ) the plates of food is proof itself
Th. You
anrosh
29 December 2014 at 22:29

Shreya at Jumbodium said…
Definitely it has to be. If u notice that Bengalis are at the top always. So it is a proud feeling for sure.
30 December 2014 at 10:30

Anonymous said…
Correction in the comment . Read the "start " as STAR