The food legends of Bandra... Femina

on December 19, 2014
I am very happy about my latest article in The Femina which is my tribute to the food legends of Bandra which have fed me through my years here and made Bandra feel like home for me.

I have focused on home grown Bandra legends and not chain restaurants like Indigo & Smokehouse Deli and Saltwater Cafe which we are fond of. Some folks have said that I should have entered Soul Fry as Goan but they don't serve pork which to me is the side of Goan cuisine that I love. One omission is National where I had eaten once ages back but I guess no list is exhaustive.

So here's the article on my Bandra.. 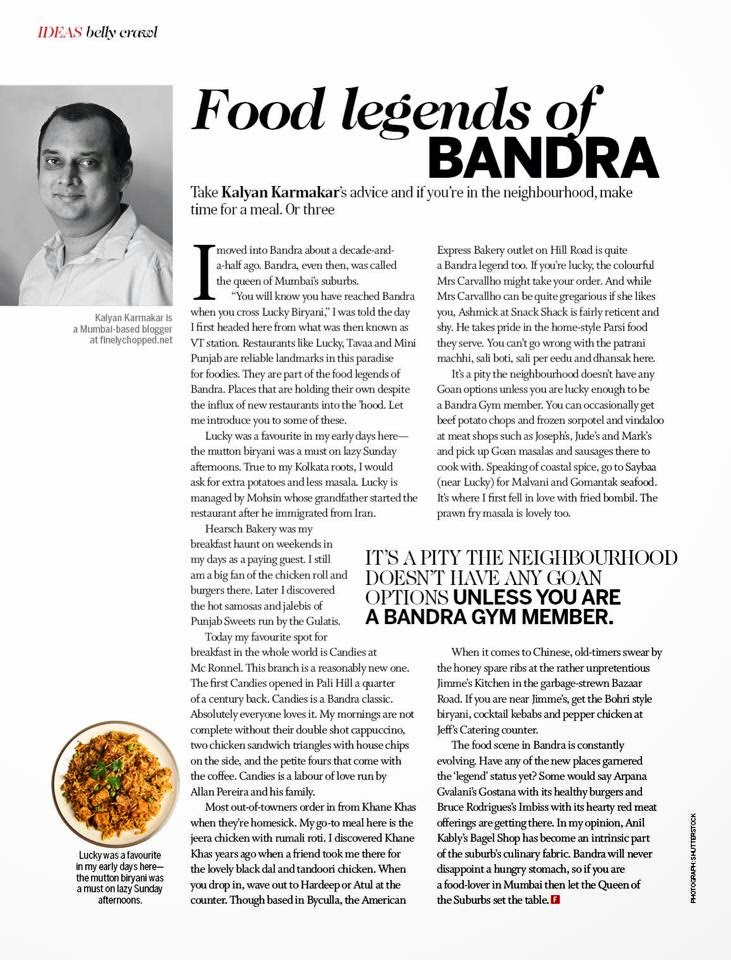 This is the unedited text in case you can't read it in the picture above:

I moved into Bandra about a decade and a half back. Bandra, even then, was called the queen of the suburbs of Mumbai.

“You will know you have reached Bandra when you cross Lucky Biryani” I was told the day I first headed to Bandra from what was then known as VT station.

Yes, there are restaurants such as Lucky, Tava and Mini Punjab in Bandra that have literally become landmarks in Bandra.

They are a part of what I like to call the ‘food legends of Bandra.’ Places which were popular when I first came here and which are holding their own despite the influx of new restaurants into the hood. Let me introduce you to some of these.

Lucky was a favourite in my early days in Bandra. I used to head there for the mutton biryani on lazy Sunday afternoons. True to my Kolkata roots I would ask them to add extra potatoes and put less masala in my biryani. Lucky is managed by Mohsin whose grandfather had come from Iran and started the restaurant.

I would go to Hearsch Bakery for breakfasts on weekends in my PG (Paying Guest) days. I still am a big fan of the chicken roll and burgers there.

Later I discovered the hot samosas and jalebis of Punjab Sweets run by the Gulatis. I would get these home to have with coffee as breakfast.

Today my favourite spot for breakfast in the whole world is Candies at Mc Ronnel. This branch is a reasonably new one. The first Candies in Bandra started in Pali Hill a quarter of a century back. Candies is a Bandra classic. Popular with people of all ages, genders and social classes. My mornings are not complete without a double shot cappuccino, two chicken sandwich triangles with the house made chips on the side and petite fours that come with the coffee at Candies. Candies is a work of love of Allan Pereira and his family

Most Bandraites call up Khane Khas when they crave for home food. My favourite order here is a jeera chicken and rumali roti. I discovered Khane Khas years back when a friend took me there for the lovely black daal and tandoori chicken. Since then I have been sold on Khane Khas. The experience there becomes that much special if Hardeep or Atul are manning the counters or taking the calls.

Though based in Byculla, the American Express Bakery outlet at Bandra’s nHill Road is quite a Bandra legend too. They are one of the best places to go to for honest, old school bakes. If you are in luck, the colourful Mrs Carvallho might be at the counter.

While Mrs Carvallho can be quite gregarious if she likes you, Ashmick at Snack Shack is fairly reticent and shy. He does take pride in the home styled Parsi food that he serves there though. Snack Shack is a good bet for trying out patrani machhi, sali boti and sali per eendu and dhansak and other Parsi delights in Bandra.

It’s a pity that Bandra doesn’t have any Goan options unless if you are lucky enough to be a Bandra Gym member. As a non-member you can go to the Christmas fetes at the Gym and try out home cooked Goan food sold by Goan ladies from all over Mumbai. You could occasionally get beef potato chops and frozen sorpotel and vindaloo at meat shops such as Joseph’s, Jude’s and Mark’s and pick up Goan masalas and sausages there to cook Goan food at home.

There aren’t any Marathi vegetarian outlets in Bandra. For Malvani & Gomantak seafood there is Saybaa near Lucky where I first fell in love with fried Bombil. They also serve a spicy shark curry. The prawn fry masala is lovely too.

When it comes to Chinese, old timers swear by the honey spare ribs of the rather unpretentious Jimme’s Kitchen in the garbage strewn Bazar Road.

If you are near Jimme’s then do drop in at the Jeff’s Catering counter for some Bohri styled biryani and cocktail kebabs and pepper chicken.

The food scene in Bandra is constantly evolving and new restaurants are being opened here by the dozen.

Have any of the new places garnered the ‘legend‘ status yet?

Some would say Arpana Gvalani’s Gostana with its healthy burgers and Bruce’s Imbiss with its hearty red meat offerings are getting there.

In my opinion Anil Kably’s Bagel Shop is probably the newest of the Bandra legends and has become an intrinsic part of the suburb’s culinary fabric.

The thing about Bandra is that it loves those who like to eat so if you are a food lover in Mumbai then this is the suburb to be in.