I'd been meaning to go to Sassy Spoon in Nariman Point ever since it opened but all our food trips to town end up in Ling's.

Then Sassy Spoon opened in Bandra where Mocha Mojo used to be and I was looking forward to visiting it. Got a chance recently when we there on a friend's birthday one Friday night.

They don't take bookings at Sassy Spoon and since it was Friday and the place is new I thought that we wouldn't get a place. Surprisingly enough we did get a table when we reached at around 9.30 pm. In fact quite a few tables emptied by 10 pm and we moved to a more central table compared to the one by the door where we first sat at. 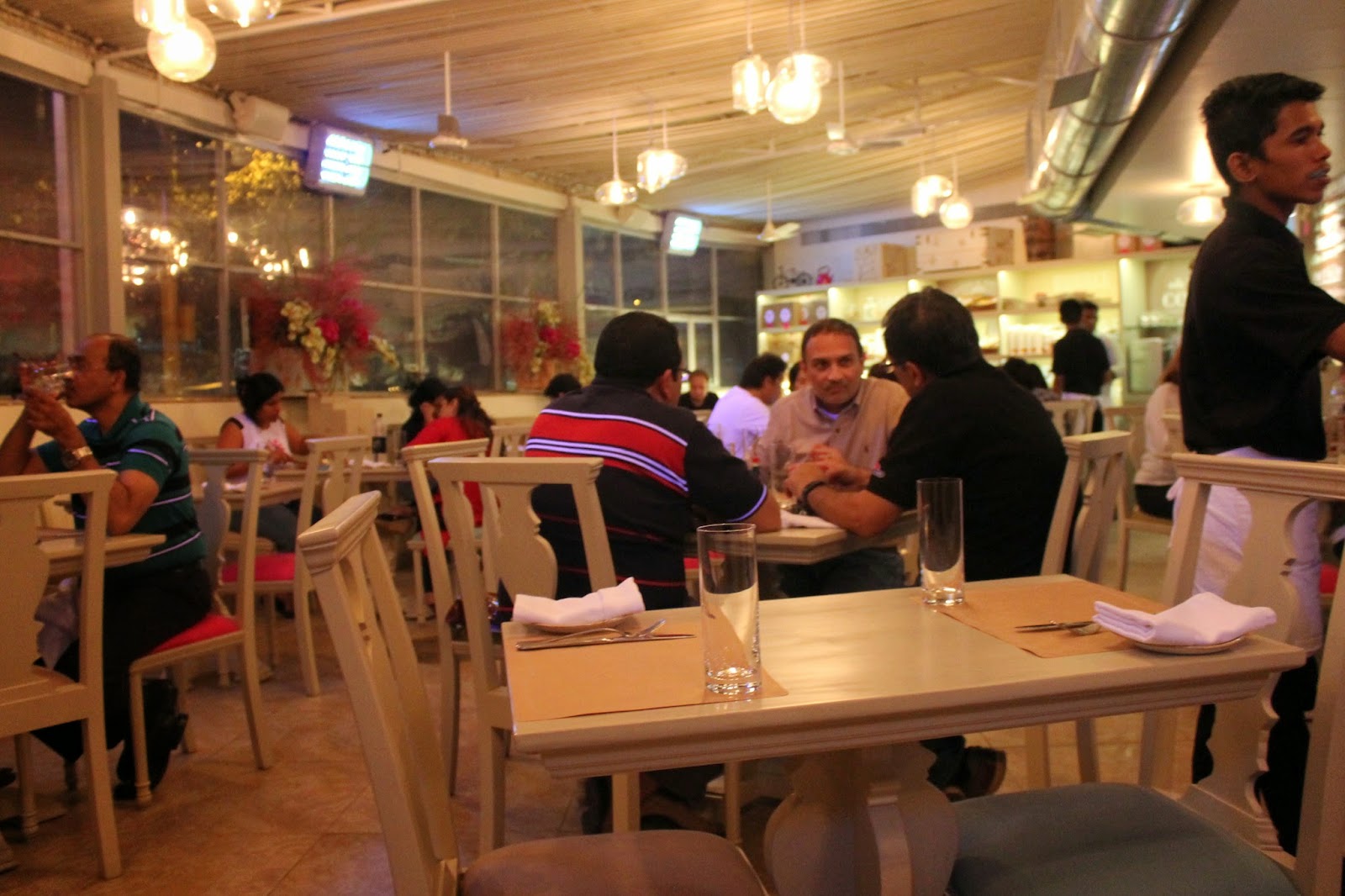 Social media chatter on Sassy Spoon Bandra described it as a pretty and quaint place and that's what it was with pastel shades, warm yellow lighting and cheerful wooden furniture. The place wasn't noisy though there were kids around. The service is pretty polite and attentive. They once quietly came and told us that the last service is at 10.45 pm but apart from that didn't hurry us. There were three of us and we called for two dishes each for our starters and mains so they very thoughtfully got us individual plates as it was clear we would be sharing. When K wasn't happy with her dessert they changed it promptly.

And how was the food?

We started with fried calamari (Rs 395) which were thinly breaded so the main taste was that of some pretty good quality squids and not of the coating. They had fried it just right and it wasn't overcooked or rubbery. This combined very well with the Sriracha mayo and pickled zucchini. Possibly the best dish of the day which shone through with its simplicity and was an example of good cooking.

The other starter we had was actually a mains. This was the pork ribs (Rs 650) which a friend had praised on twitter. The pork was cooked really tender though our friend G, who cooks great pork herself, felt it could be more tender. I was happy though with the way it was done. It was supposed to be cooked in smoked barbecue sauce and I found its unidimensional sweetness a bit unnerving. There was no hint of the smokiness in the dish. I know that barbecue sauces tend to be sweet but I like to keep my desserts and meat separate. A stronger smoky taste would have helped.

For our mains I chose the rawas steamed in tamarind and chilli (Rs 650). This dish didn't work for me as the fish was too chunky and dry and as G pointed out the marinade hadn't really seeped in to the fish. Plus the only taste that we got was that of red chilli powder and none at all of the tamarind.

I did like the creamy coconut milk rice that they served with it. This was seductively tasty.

I had high hopes from the desserts as one of the partners at Sassy Spoon is apparently a cordon bleu trained pastry chef. They offer desserts from the bakery counter and some which come from the kitchen.

I went for a hazelnut macaron (Rs 80) which turned out to be so disappointingly dry that I refused to finish it. I missed the buttery crispness of the meringue cookies of Pooja Dhingra's Le 15 Patisserie. Those are the best I've had in Mumbai and the macaron at Sassy Spoon just didn't match up. 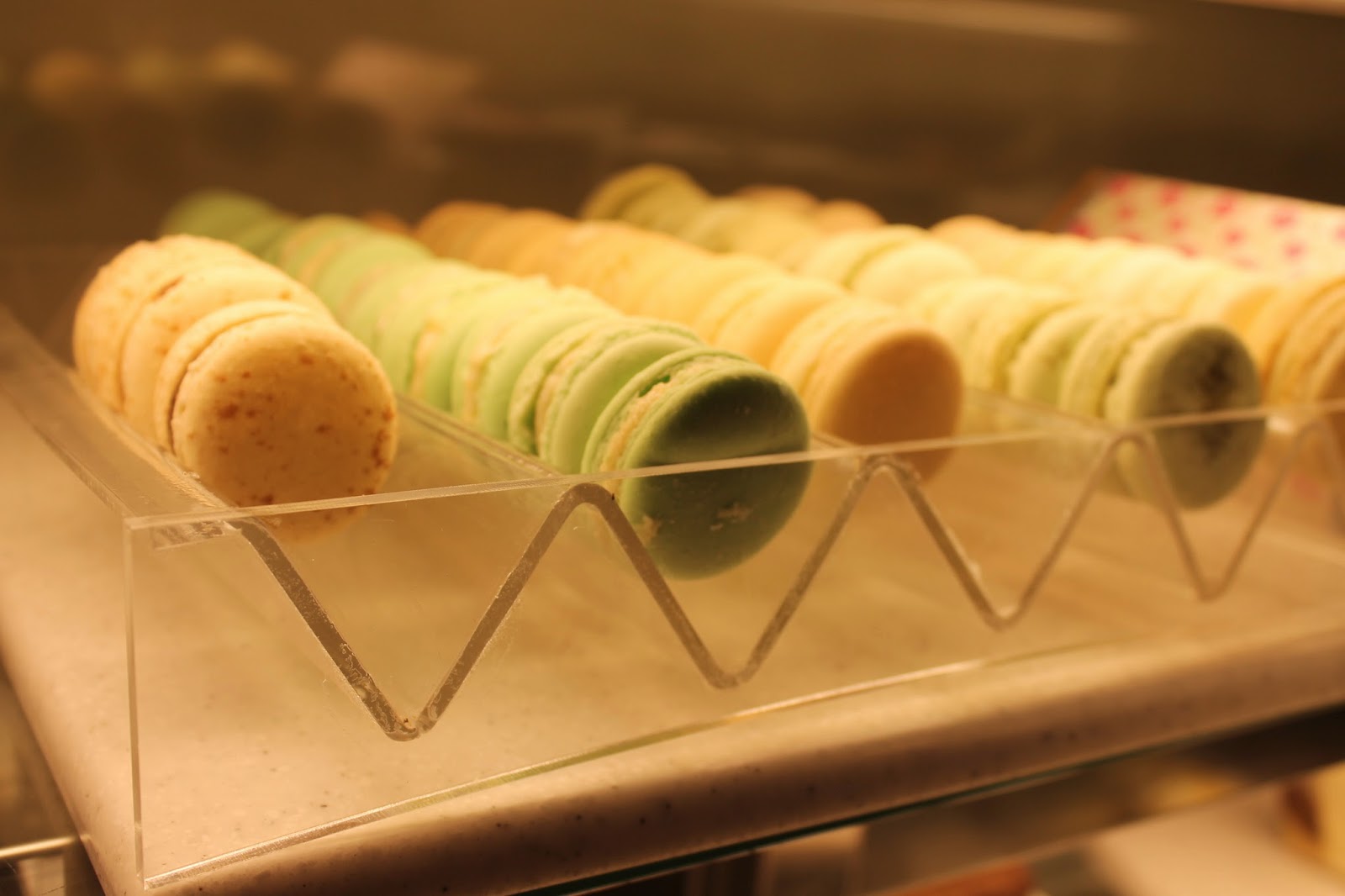 I tried the red velvet cupcake (Rs 86) which was nicer than the macaron but I missed the tartness of the cream cheese frosting and moistness of the sponge and again felt that Pooja makes a much better one.

K went for the 'decadent' chocolate ice cream (Rs 100) which is made in house. She sent the first serving back as it didn't have the array of chocolate chips which the menu description promised. The second one had chips but still were not decadent enough for K.

One tries to avoid desserts these days and it's sad when desserts underwhelm when one indulges in them.

So would I go back?

For the happy vibes, yes. Also for the fact that one can get a table on a Friday night in Bandra (it was the long weekend though).

Maybe to check out the weekend breakfast options.

I guess that sums it up.

suvro said…
In another post, I remember you mentioning you don't like coffee with your meat.
Did you taste enough of the rub on that steak to know if you liked it?
30 January 2015 at 03:58