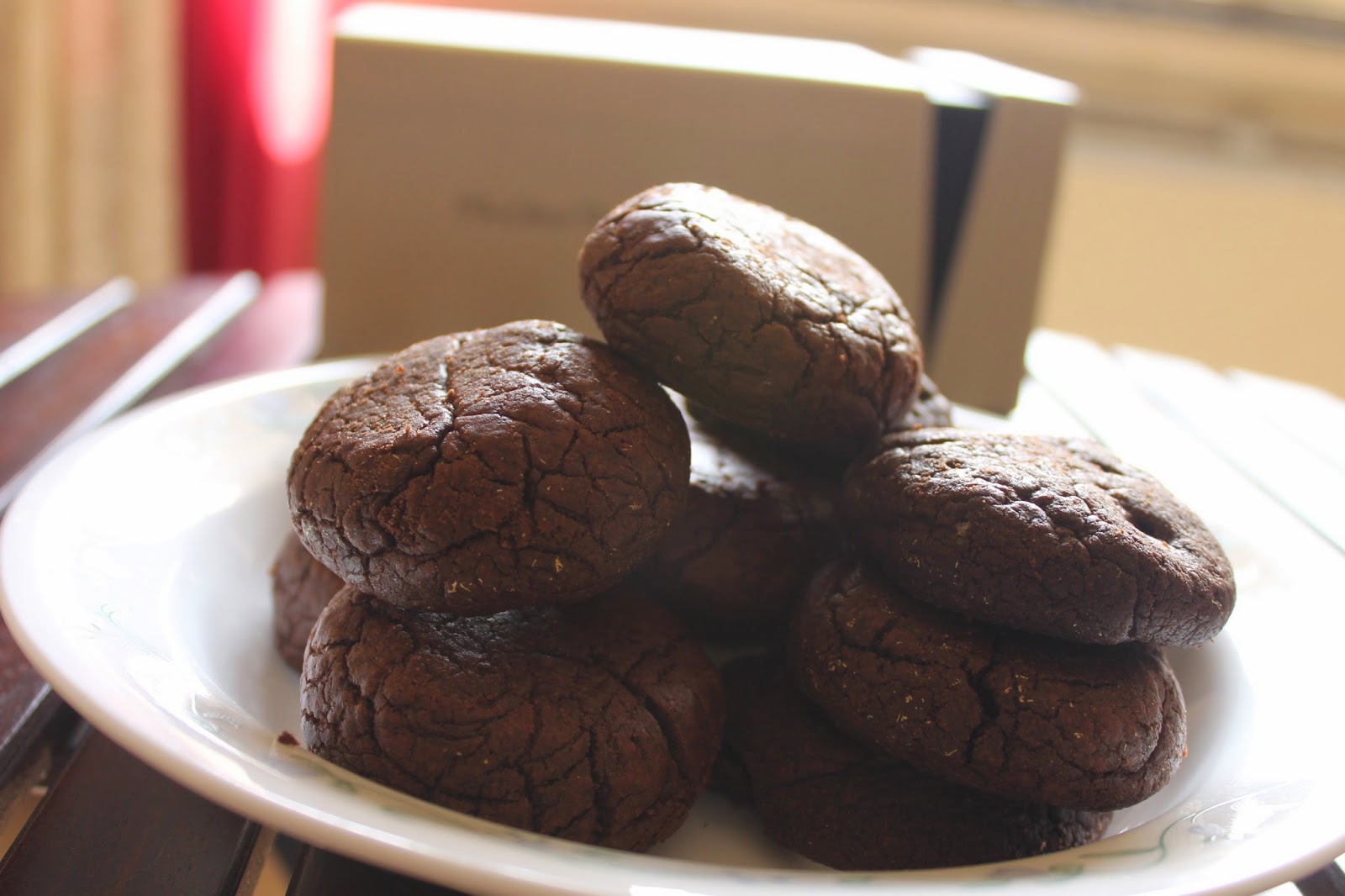 A couple of weeks back I was in Gurgaon's Oberoi where I was hosted to a dinner at their coastal restaurant, Amaranta.

Joining me was restaurant critic Marryam Reshii who introduced me to Executive Chef Ravitej of the Oberoi Gurgaon with whom we had a lovely conversation about food.

Highlights in a standout dinner was the Pondicherry inspired seafood bouillabaisse which was creamy and retained the rich flavours of crab and was covered with a crust pastry which gave a nice textural contrast to the stew. There was my favourite foie gras which was slightly seared and then steamed with a slight touch of pepper and won my heart. Another standout dish was the Syrian Christian inspired Wagyu beef chilly with bacon rice, both of which highlighted the great quality of the produce used.

At the end of the dinner, I sipped on a green tea. The tea came with a couple of cookies. I took a bite of the chocolate one.

Now here's the thing about me. I love a good soft baked milk cookie with chocolate chips. As does K except she prefers chocolate cookies and not milk cookies.

As I munched on the cookie and took in its buttery Belgium chocolatey gooeyiness I knew that K would love it.

So I threw etiquette to the winds and shamelessly requested for a few cookies to take home. The folks at Oberoi packed a little box for K and I headed back to Mumbai with it.

I gave them to K when I returned and, just as I guessed, she loved the cookies. She had three cookies one after the other and then went for a walk. There was one left, and my mother in law, who was visiting us had the fourth much to K's disquiet. She had planned to have the fourth once she returned from her walk.

A week later I was in Gurgaon for a night. I got in touch with Mallika of the Oberoi's to see if I could some cookies for K. Mallika immediately sourced some from Chef Ravitej and packed them for me.

Then there was a problem. I didn't have time to go to the Oberoi's as I was caught up with work. On hearing about K's love for the cookies Mallika decided to commandeer a hotel car and sent two boxes of cookies to my hotel so that I could take them back to K.

I then headed to Bangalore with the boxes before returning home to Mumbai a couple of days later. I didn't tell K about the cookies and wanted them to be a surprise.

Guess, what's the first thing K said when she saw me!

She squealed when I took out the two boxes Mallika had sent.

This time K has agreed to share a few with her mom. Just a few. 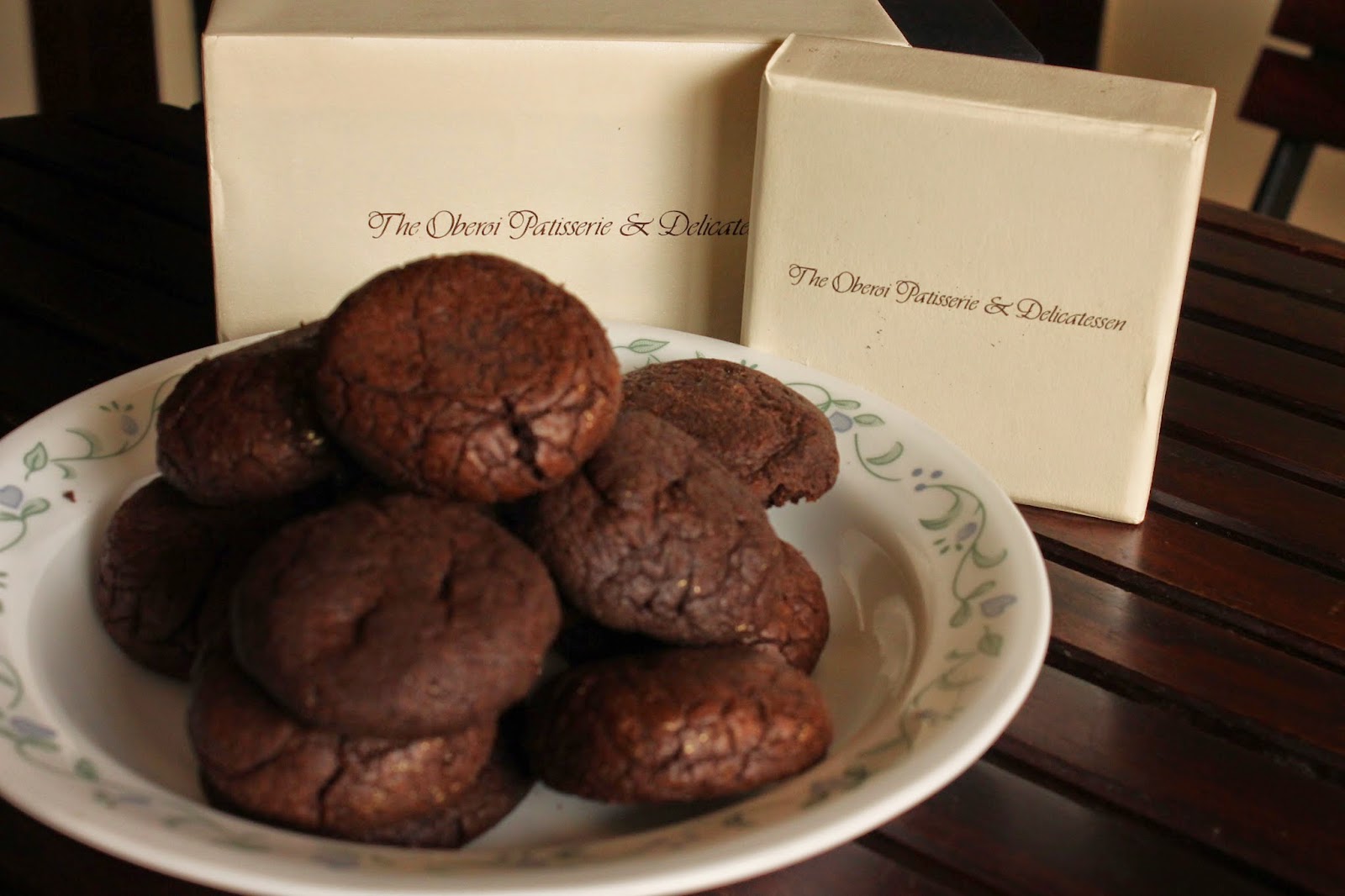 Note: The Oberoi recommended way to have the cookies is to warm them for about 10 seconds in the micro. I like it this way as there is little chocolatey river inside the cookie.

K, prefers to have them unheated as she likes the bite of solid chocolate inside
desserts