on February 26, 2015
Click here to see more pictures from the food walk

Lauren (@spanishsabores) of the Madrid Food Tours connected with me on twitter when I went to Madrid for the Madrid Fusion food festival.

We then met at the Madrid Fusion venue. Turns out that Lauren is a North American who has made Madrid her home. She jointly runs Madrid Food Tours which does food walks in Madrid. She invited me to join them on the Ultimate Spanish Cuisine Walk (85 euros pp) before I left town.

So I decided to take up the offer and go on a walk the day before I left. I was in two minds though. My hotel, Pullman, was rather far from Plaza Mayor where the walk started. Plus they had taken us on a food tour into Madrid from Madrid Fusion the previous afternoon and everything seemed so familiar even though we had been to Madrid two years back. I was wondering whether it was worth waking up early and going all the way for the Madrid Food Tours walk. Wouldn't it be more of the same?

Then I did decided to go on the walk. I took the Metro, switched trains, and reached Plaza Mayor and joined the walk. And boy was I glad I did so. Each place we went to on the walk was different from the time I had earlier spent in Madrid. We tried dishes that I hadn't before. The stories on the walk gave me an insight into Madrid, its people and its food which I didn't have before making the walk fully worth it.

The walk was conducted by Debbie who moved into Madrid from London 6 years back and fell in love with her adopted city. She is British. I found out from her that most of the people who do walks for the Madrid Food Tours are English speaking expats. This makes the walk a lot richer for folks like me who understand English but not Spanish.

We had close to eleven food stops in the walk but Debbie had primed us in the beginning and helped us pace ourselves.

Our first stop itself was a new one for me which removed my apprehensions about treading the beaten track.

This was at a chocolate shop called El Riajano. Debbie said that was opened in 1855 by the then queen's pastry chef with the support of the queen. We tried a biscuity cake called soletilla with thick hot chocolate instead of the usual churros with chocolate. 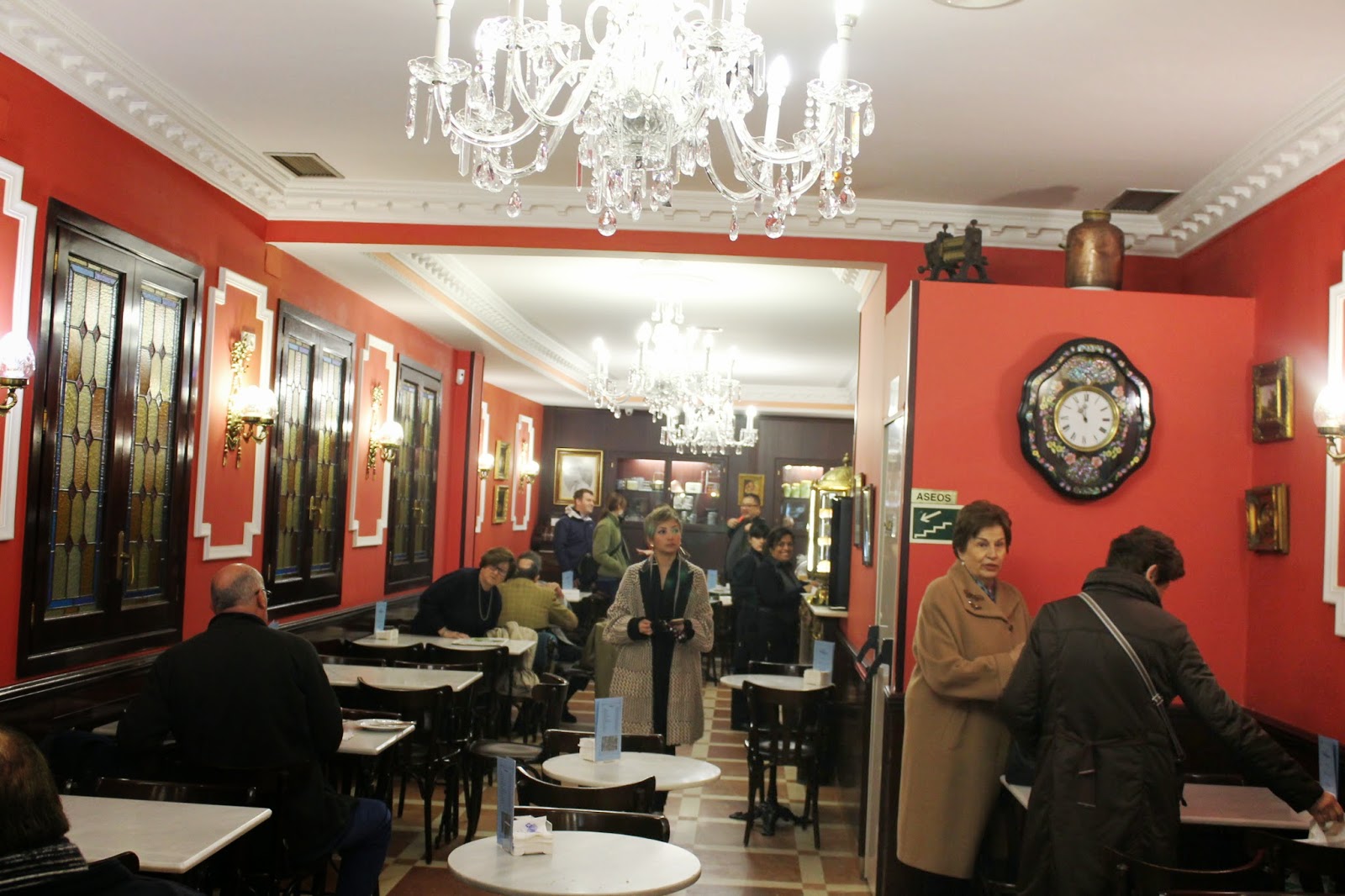 Our next stop was a very interesting one at a nunnery called Corpus Christy. Here nuns bake cookies which they sell from behind closed windows as they are cloistered nuns who have taken a vow to abstain from meeting people from the outside world.

We tried cookies here which reminded me of the Shrewsbury biscuits of Pune's Irani bakeries.

We then went to the Mercador san Miguel. We had gone here in our last visit too. But it was from Debbie that I got to know that it had started as an illegal fish market in the 1900s. That its popularity had waned in 1980s with the advent of super markets. That it had been bought over by 4 friends after that who converted it into a hygienic food market where the stalls were run by Spaniards.

Here we tried a drink called vermut and tapas of chillies,  quail eggs and olive pierced by toothpicks. Finishing these in one bite was a challenge. 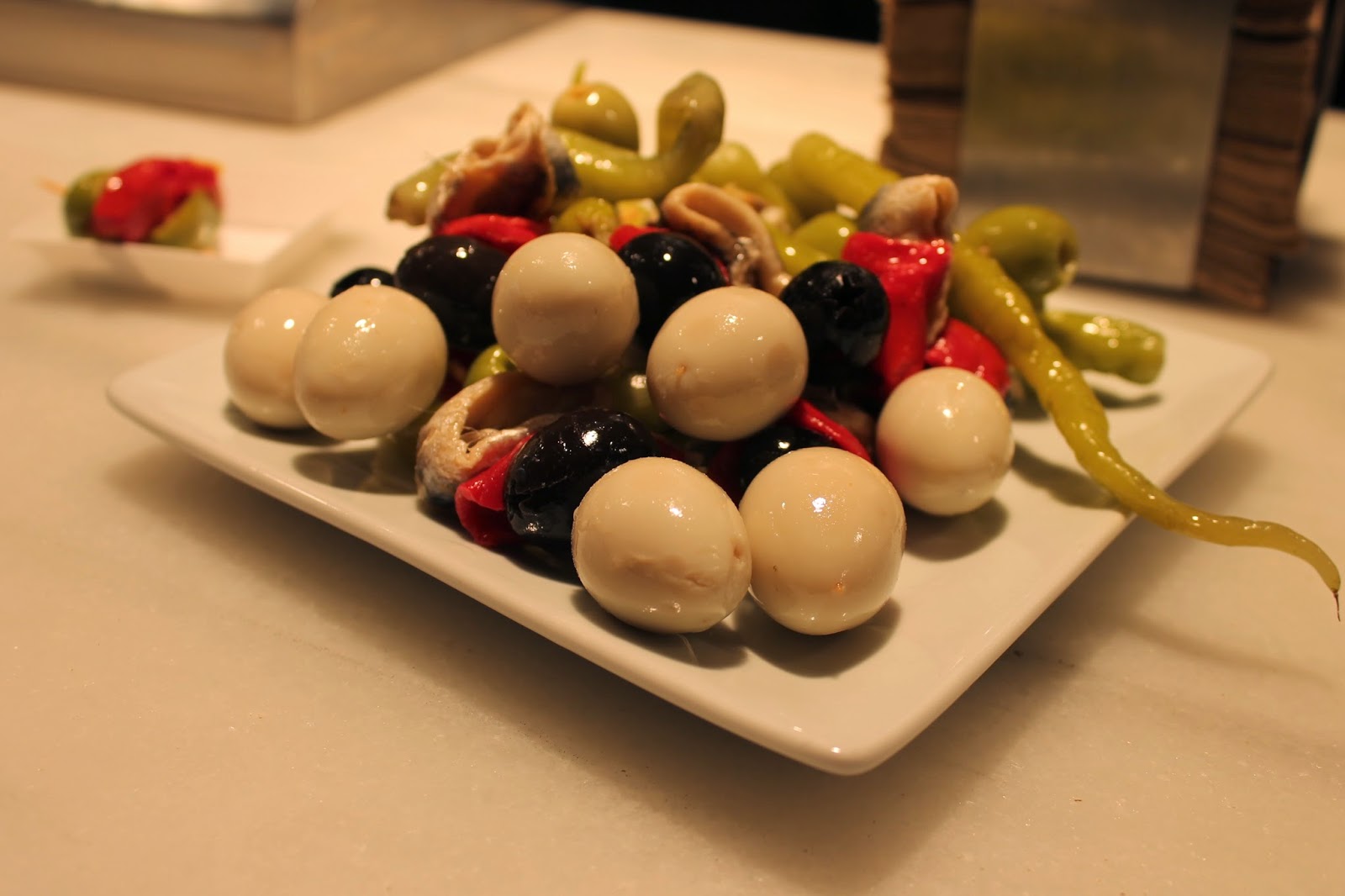 Our next stop was a restaurant called El Anciano rey de los vinos where we tried some light Spanish wines. Debbie said that apparently a secret tunnel was dug from the palace to the restaurant in 1909 for king Alonso to come over and have a drink here incognito.

Here we also had an amazingly delicious filo pastry stuffed with slow cooked tender ox tail. Again, a dish I had not had in my earlier visit to Madrid or Spain.

The walk got more exciting as it begun to snow (early Feb) though it was bright and sunny. It was light snow but still I had not experienced snow fall since I had grown up so this was great fun. There were two Americans from DC in our group who were used to snow. The others were Filipinos who had come for Madrid Fusion too and they were as excited by the snow fall as I was.

Our next stop, Taverna La Bola, founded in 1870, is famous for its Madrid stew which is made with ham hock, pork fat, chick peas, chicken and pepperoni. The stew is slow cooked in ceramic pots. Debbie told us that the place is run by women and was one of the few enterprises run by women during the dictator Franco's rule.

We had steaming bowls of intensely meaty flavoured broth from the stew which was just what we needed when it was snowing outside.

Debbie told us her theory of why the Spaniards are a fairly slim race. They walk a lot according to her. Eat frequent meals and a very light dinner and apparently eat vegetable heavy meals at home. So it was not a life of only jamon and chorizo. 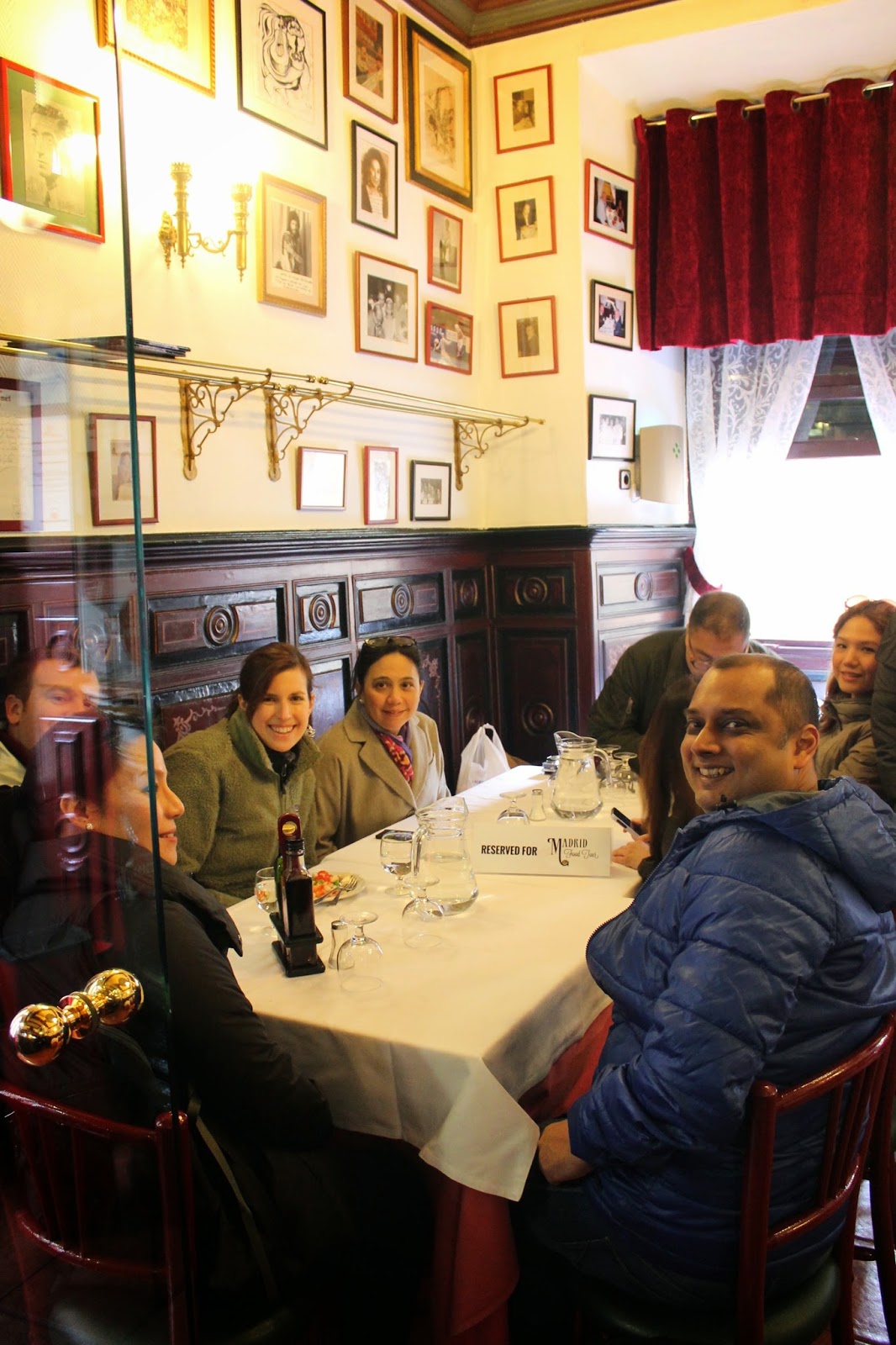 Debbie next to us to a very special place, Ka Despensa Carmen, a neighbourhood takeaway joint started by a lady called Carmen in the 1980s. People from the neighbourhood, including Debbie, often come and pick food from here when they are too bored to cook.

Here we had deliciously juicy mixed meat (pork and beef) meat balls and piping hot flavoursome tuna empanadas. I thought that empanadas were Latin American dishes. Debbie told us that these stuffed puff pastries had gone to South America from Spain.

We then went to a meat shop which I had gone to last time as well. This time I got to know its story. This is a place called Cafe Bar Ferpal started by a couple of friends who were ham cutters in the late Franco years. They had apparently won many ham cutting competitions till they hung up their boots to let others compete.

A bit like our Lata Mangeshkar retiring from the Filmfare awards.

You can buy ham and cheese here and sandwiches too. I remembered K buying me jamon sandwiches here on our last trip.

In a nutshell these are: 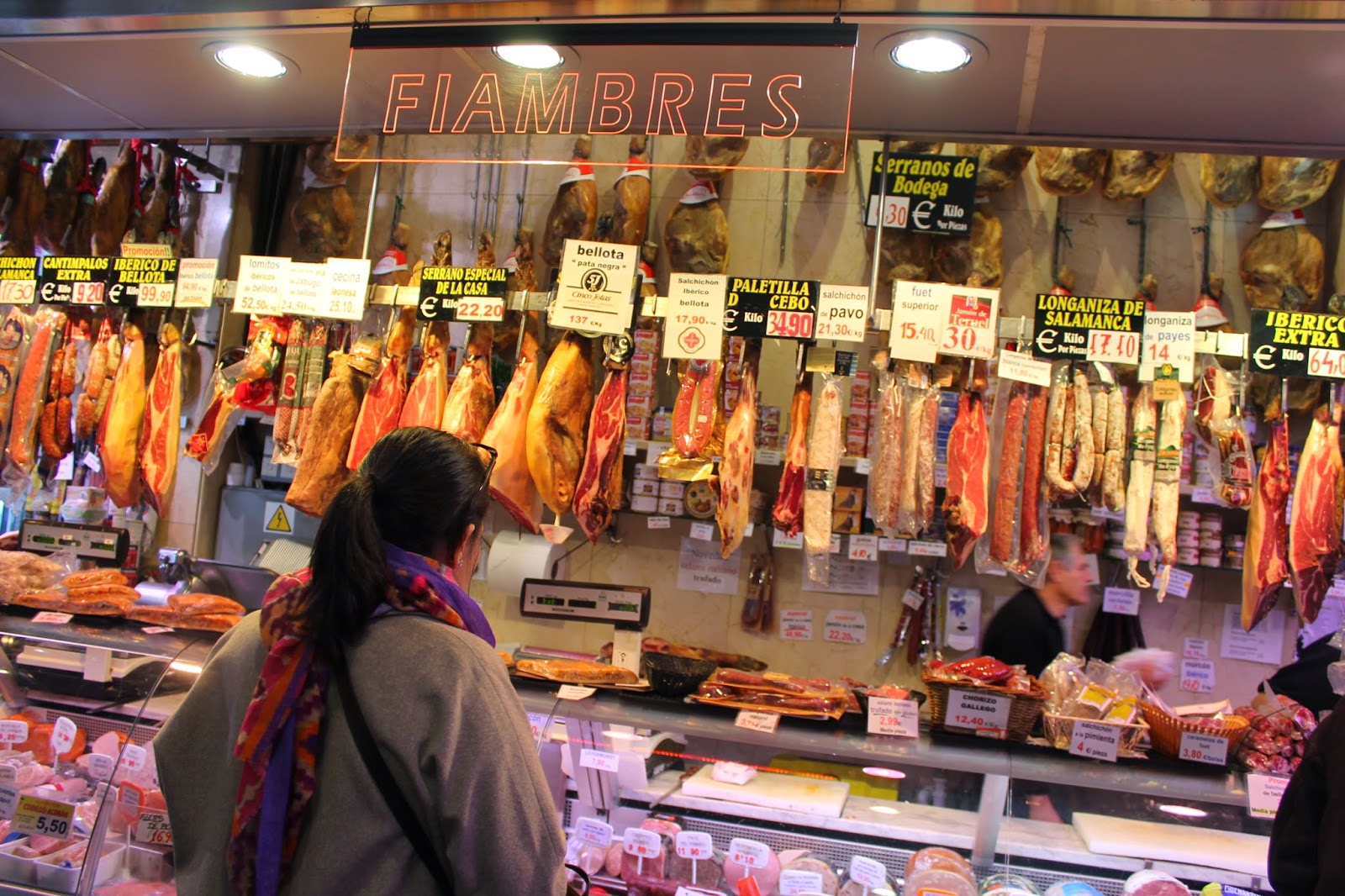 It was time for more award winning stuff. We went to a place called Bar Cerveritz. This is located outside Mercado san Miguel. Without Debbie's pointing this out we would never have gone there specially with San Miguel around.

Debbie introduced us to Carlos here who makes award winning Spanish tortillas (omelettes) where he adds onions to the traditional potato and egg mix. I tasted the tortilla which was creamy and delicious and light years ahead of what I'd been eating in the hotel breakfast.

We also tried some manchego cheese and thanks to Debbie got to know that is so called because it is a goat cheese made in Mancho in Northern Spain.

Carlos also poured out a Spanish cider for us.

We then headed back to Plaza Mayor where I really missed K. We went to Plaza mayor quite a few times on our holiday together two years back. It seemed so empty without her this time.

There was more food to come. We went to a crowded shop called La Campana which K and I missed despite our many visits to Plaza Mayor last time. This is a sandwich place and we joined the crowds to have juicy, freshly fried calamari boccadillo (sandwiches in hot dog like buns).

With that we went to our last stop, a sweet shop called Vicenz where we tasted a Spanish sweet called turron, a popular Christmas dessert, which I didn't fancy much to be honest. 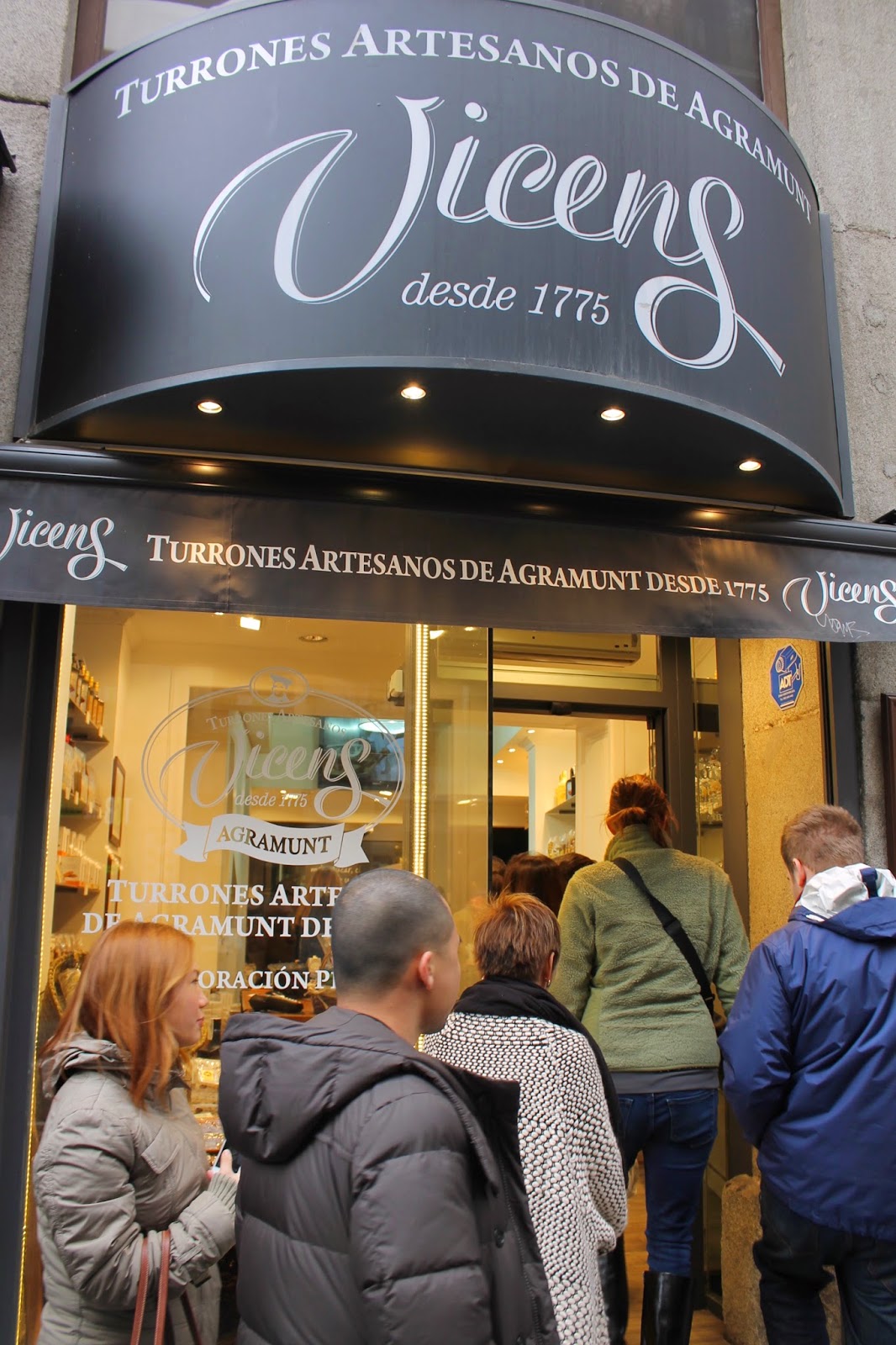 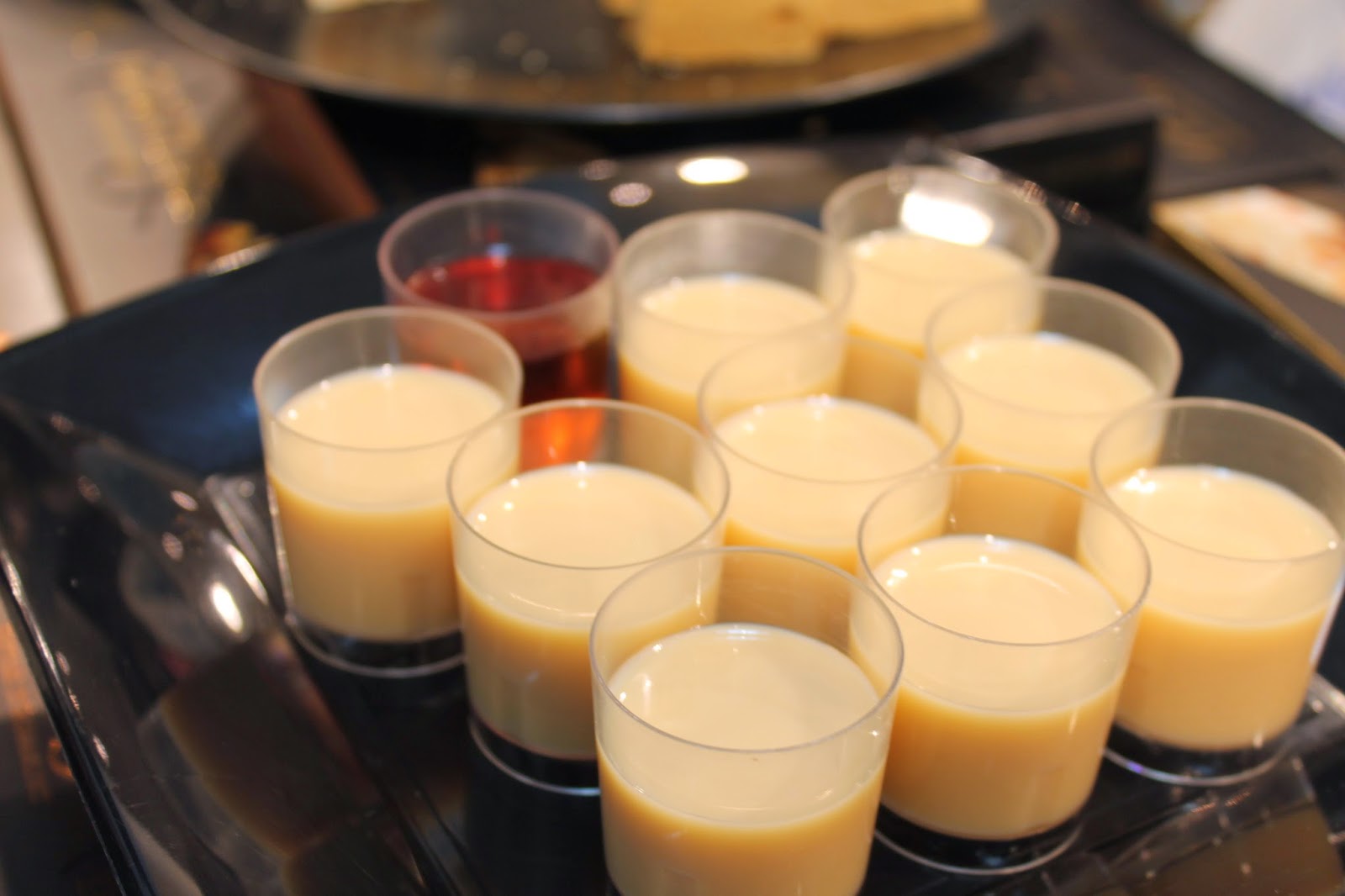 After our K and my trip to Madrid two years back and our suckling pig lunch then at Botin, apparently the oldest running restaurant in the world, our tapas stops at the La Latina street, the Mercador san Miguel visit and the San Ginnes churros and hot chocolates I thought that I knew a fair bit about the food of Madrid.

The eleven new places that Debbie took us to and the new dishes that I tried and the stories that I heard were a good argument for why one should go on a food walk!