After attending two great food walks in Madrid and in Dubai it was now time to do one of my own in Mumbai.

For this walk I returned to Dadar where I had done two walks earlier. This was at the request of a Norwegian lady, Birgit, who has moved into Mumbai and wanted to explore Dadar more.

We had a very interesting mix of people in the walk. We had expats who have made Mumbai their home, their visiting relatives from abroad and a Maharashtrian lady who used to live in Dadar earlier but has moved to the suburbs now. She wanted to relive her Dadar memories. Apart from the Norwegian and British families and the former Dadar’ite, we had a young American who had come to India on a mission to discover our food and a Japanese student who is based in Mumbai to study food customs here. 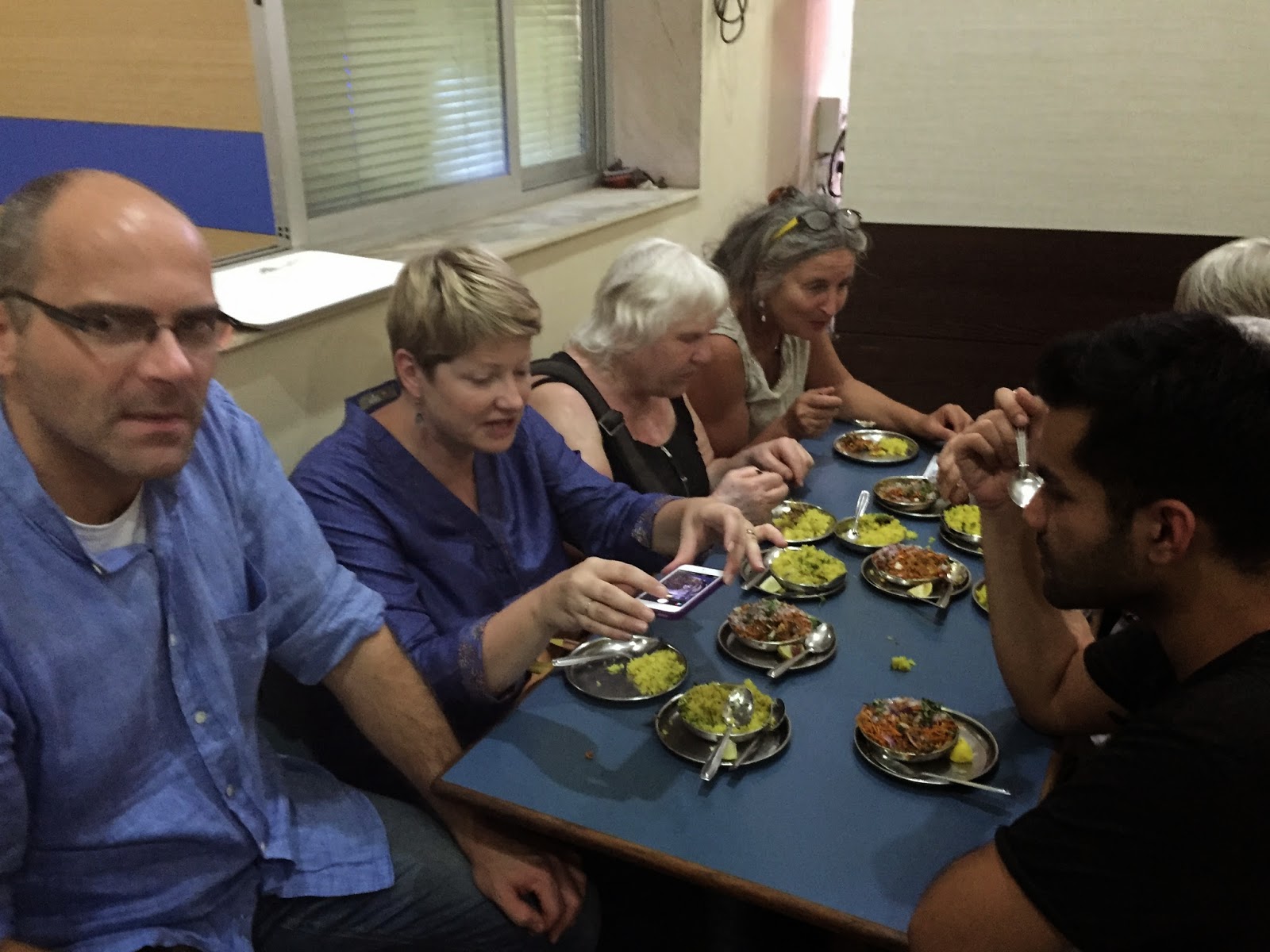 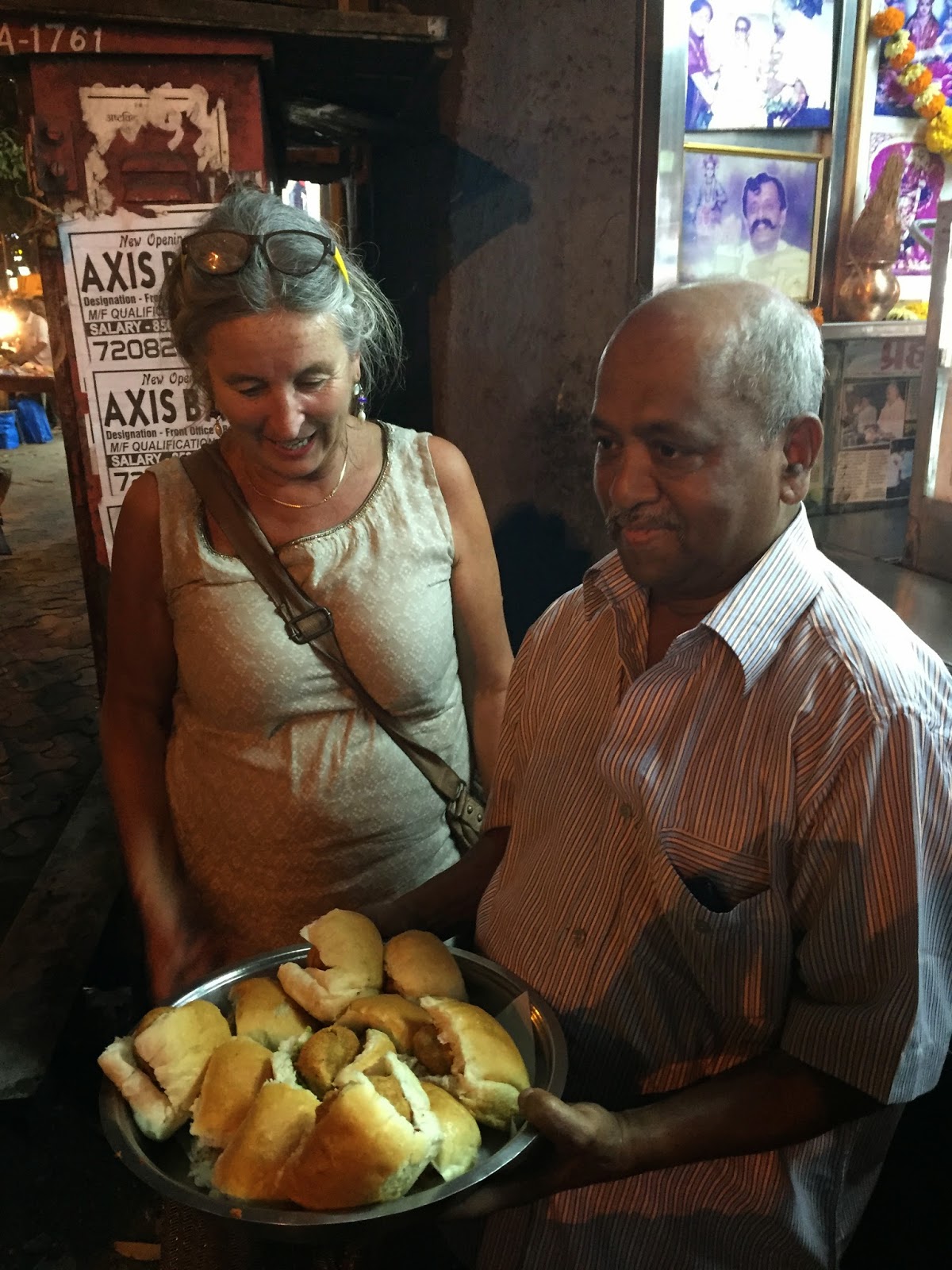 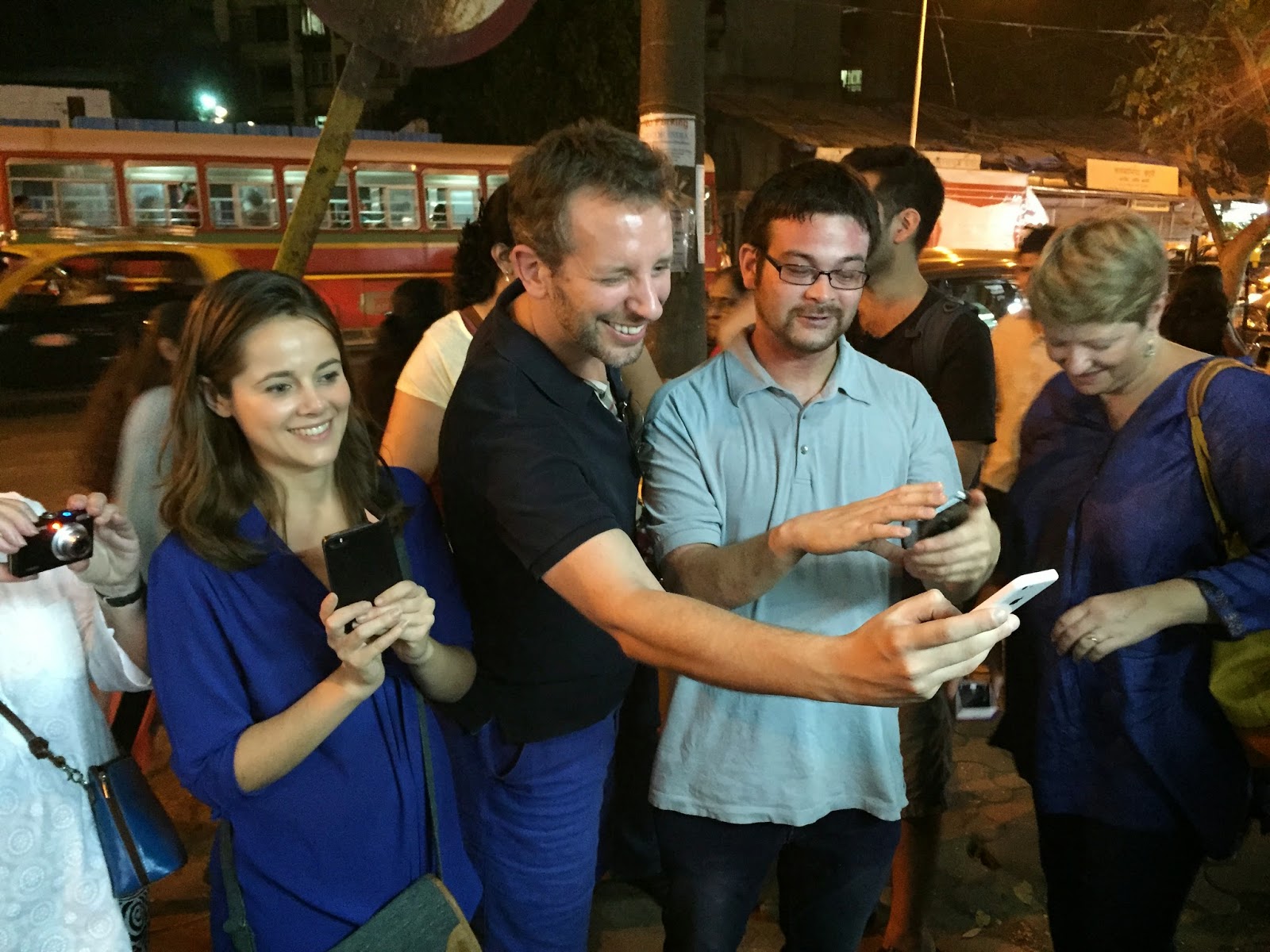 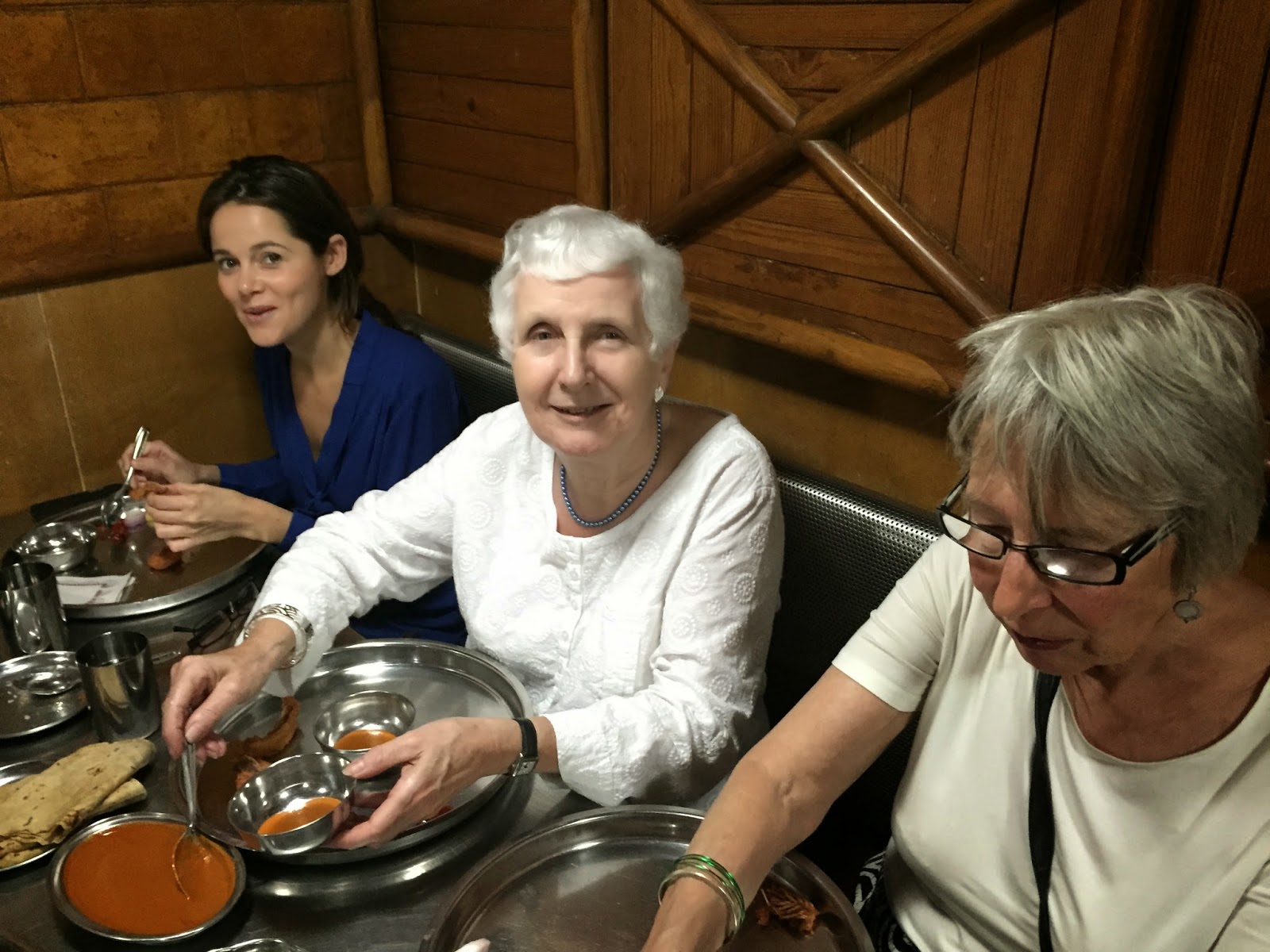 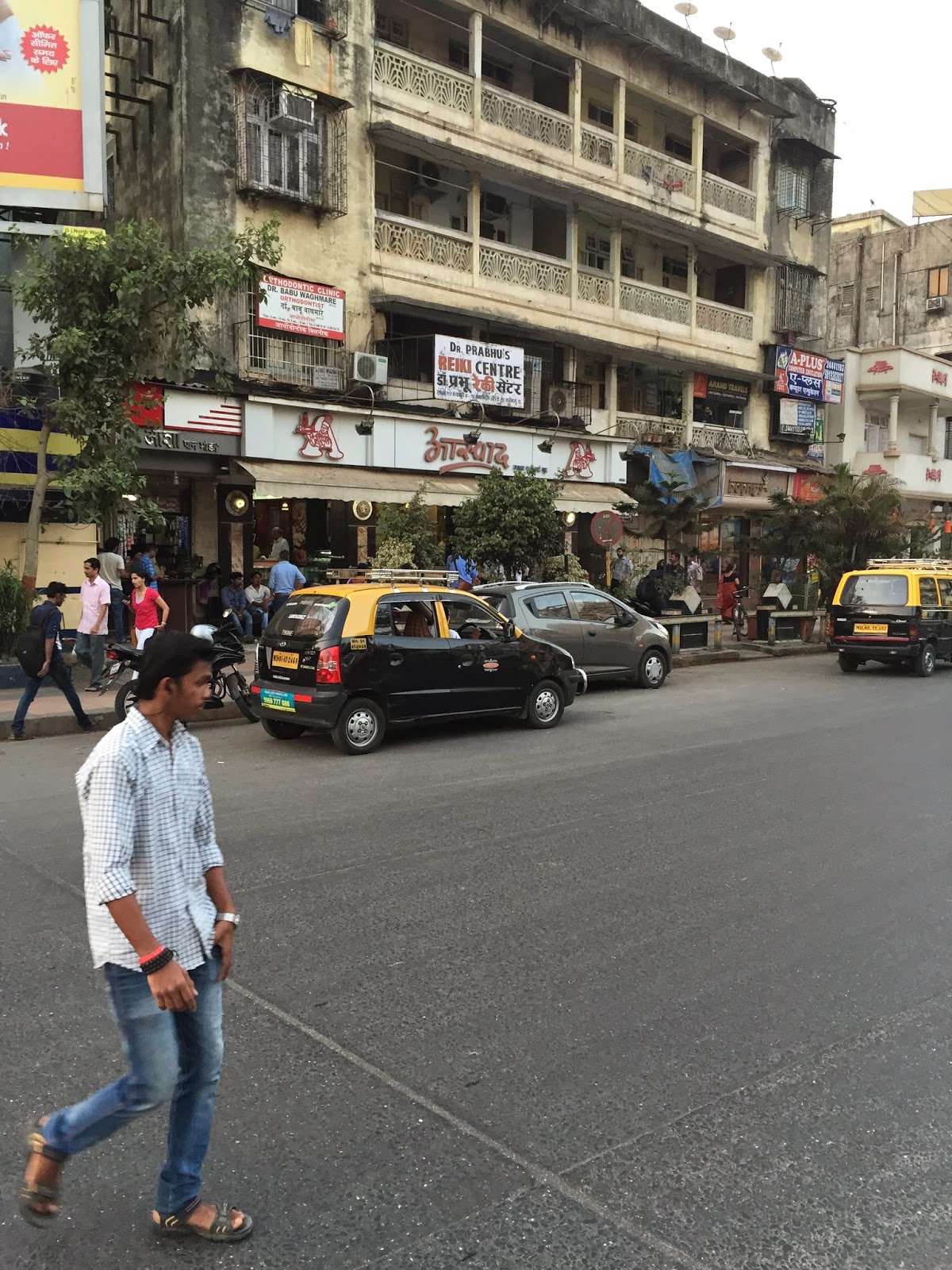 Dadar possibly has the highest concentration of Maharashtrian restaurants in the city and is the best place to do a Maharashtrian walk. We went to a few these in our walk last Saturday.

These restaurants are normally packed with people. Yet, thanks to the understated and publicity shy nature of their owners, they rarely feature in the Mumbai go to restaurant lists in the media. Most of these places are eateries where people queue up to eat and leave the moment they are done. Not the sort of places where you can hang around, or where people go for the free wifi and ambience. These are ‘eateries’ in their purest forms. The restaurants of Dadar don’t have the reputation of being customer service oriented places. Yet, I have been humbled by the warmth and support that I have received each time I have done a walk here. I guess the interest and curiosity of people on the walk  to know more about Maharashtrian food is infectious.

I usually start my walks here with Aaswad. The folks at Aaswad have been extremely supportive of my walks. They reserve a table for us even though we do the walk in the evening when there is a queue to get in. We are never hurried here and are always warmly hosted.

This time we were privileged to meet the founder owner of the thirty year old Aaswad, Mr Shrikant Sarjoshi, and his son, Mr Suryakant Sarjoshi.

Then there were the soft inside and crisp outside, very flavourful, coriander and gramflour based kothambir vadi.

We tried the sago seed Maharashtrian version of the Italian arancini balls, sabudana vadas. They make the juiciest renditions of these at Aaswad.

We then had the popular mixed pulse based pancake like breakfast dish thali peeth which is served with a blob of white butter.

To wash these down we had the first of the four drinks of the evening, kokum sherbet, a refreshing drink made with kokum berries and rock salt.

I was really happy to see the exuberance with which our visitors from abroad enjoyed the food. The food was approved of by our Maharashtrian participant too!

The Sarjoshis also packed us goody bags of puran polis and bhakad wadis to take home.

Aaswad is a comparatively ‘new' Maharashtrian joint which was set up  about 30 years back as a hygienic place for families to enjoy Maharashtrian food. Air conditioning was introduced to make the experience more pleasant.

Our next stop, Prakash, established in 1947, the year of India’s independence is a legend. It is one of the classic eateries of Dadar. It is always packed with people. It has recently shifted location. We reached there on a busy Saturday evening. I warned folks on the walk that we would have to wait for a bit for a table and might not get to sit together.

My apprehensions turned out to be unwarranted. The folks at Prakash very kindly arranged two tables beside each other for us promptly despite the waiting crowds. They deputed an experienced member of the wait staff to host us.

Here we had our second drink of the evening, the sweetened curd based, liquefied shreekhand like piyoosh.

With this we had poha made with beaten rice flakes and the popular Maharashtrian dish of missal (savoury crunchy crackles served on a sprout and lentil based spicy daal). Missal is normally served with pao (soft bread buns) on the streets of Mumbai. Not at Prakash. They don’t serve bread as missal is not eaten with pao in Maharashtrian homes. The missal at Prakash is a lot less oily or spicy, and more home-like, in comparison to what you get in street food stalls of Mumbai. 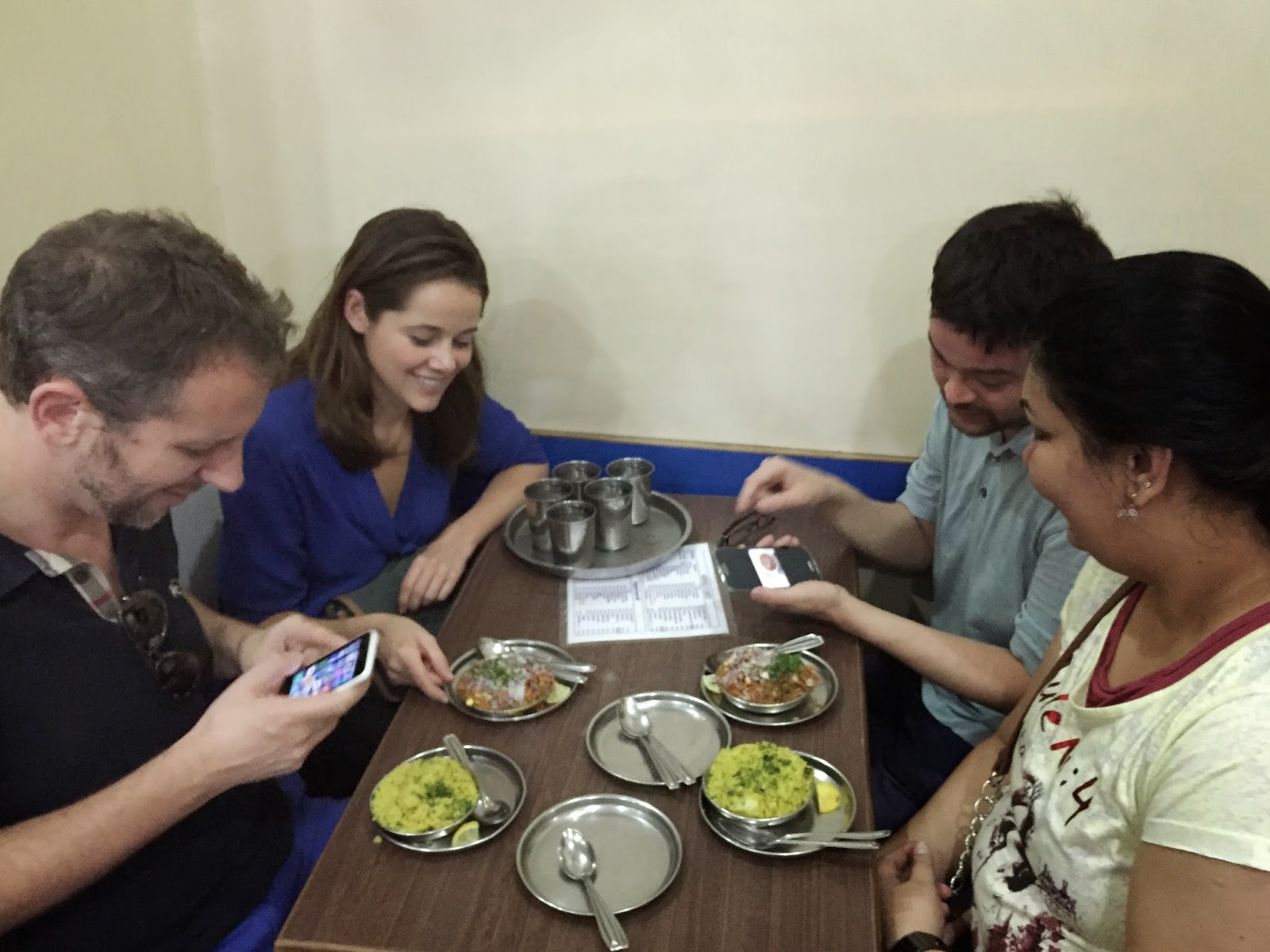 After Prakash, we walked down Sena Bhavan to a couple of shops for shopping. We stopped at Kokan Bazar for handicrafts and food items made by women from the Kokan coast and then at Santosh Masala for spices. The folks at both stores spoke in English and answered the questions from people on the walk who bought items from both shops.

We then went to a stall called Shree Swami Samarth for the ultimate Mumbai street food experience. We had piping hot, freshly made vada paos (fried spicy potato patties in a soft bun) here. What Bourdain had famously dubbed as the Bombay Burger. We had some cutting chai or milky masala tea with it.


The owner of this thirty year stall, Mr Bhonsle, was really excited to see us and exuberantly served us vada paos himself. He phoned me a couple of days later saying that he had really enjoyed interacting with people from all over the world and was happy to see how they enjoyed the vada paos from his stall.

After all the vegetarian food it was time to end our evening with some seafood. We entered Prabhakar Desai’s Sindhudurg and I smiled as people exclaimed in relief as the cool wafts from the aircon welcomed them. Desai had opened Sindhdurg as an air-conditoned Malvani restaurant way back in 1982 when air-conditioning was rare in Mumbai.

We then had some prawn fries which were a hit and people had seconds of them though full.

To go with this was the uniquely local delight of crunchy outside and jelly-like inside Bombay Duck fry.

Then there were clams in a thick robust masala (teesreya masala) and surmai (king fish) in a chilli, kokum berry and coconut (which come from Desai’s farm in Sindhudurg) based curry.

Our evening had a glorious finale as Mr Prabhakar Desai himself came down from his apartment to meet the people on our walk.

The perfect ending to an evening where we were hosted and welcomed so warmly by the food icons of Dadar.