Smoke House Deli, Bandra, is one of my favourite restaurants here. I normally prefer it for breakfast than for main meals though.

Last evening I went for a tasting of the new menu and came back quite impressed. I think the new fare is a marked improvement on the earlier menu. In fact we had gone there for dinner a couple of months back when I had a carbonara which soupy and my brother ordered a sandwich which he didn't like at all. I stuck to breakfasts here since then. The tasting last night changed my mind and makes Smoke House a viable option for me now for main meals.

As this was a tasting, the portions are small and I won't be able to comment on the portion sizes and prices. The focus of this post is more on the taste. Chef Glyston Gracias of Smokehouse was personally in the kitchen last night and brought all the dishes out. It will be important to maintain the same standards when he is not there.

Here's a quick round up of what we had.

The minced lamb chipotle patty served on a bet of chopped tomato and drizzled with a cheese reduction, was moist, flavoursome and pleasantly spicy. A happy cross between European meatballs and Indian minced meat kebabs in terms of taste. A lot more juicy than the kebab kous kous that I had had at the Lebanese Village Kitchen in Dubai the previous night.

I asked for a Spanish omelette as I had just returned from Madrid. I wanted to compare the one here with what I ate in Madrid. In Spain  egg and potato based are the base and then you can add on other ingredients to it. The omelettes are cooked in advance and is thicj like a pie. Slices are served at room temperature when customers place orders.

They made it fresh at SHD. It was a bit strange, though pleasant to the Indian palate, to have it warm. The egg was a bit tighter and firm compared to the ones I had in Madrid and the potato slices  there are softer than the one in SHD. Overall a good effort though and was closer to a Spanish omelette than what was once served in the now closed Mocha Mojo & Crepe Suzzette in Bandra.

The veg fritters made with sweet potato and beans were quite addictive possibly because of the cheese powder dust on them and the rosemary dip it was served with was quite tangy and tongue tickling.


I really liked the freshness of the tomato & cheese bruschetta served on crisp toast. The chickpea one was pleasantly creamy. The spinach one didn't work for me and the spinach was too dense.


The texture of the flat bread of the day which was crisp outside and had a nice stretch and was supple inside was pretty fantastic. The greens and cheese went very well with it though the figs added an overtly sweet touch. I removed the figs to enjoy the flat bread properly. Didn't miss the meat here thanks to the bold flavours.

The thinly sliced beetroot carpaccio cooked in a coffee reduction was refreshing but works if you like sweet salads. I can see it as being a nice summer salad. The coffee taste was not prominent.

The dish of the day for us was the choriz and potato sandwich. The bread was perfectly grilled. The choriz (a mix of local and Goan choriz) was bursting with a piquant flavour. It was spicy and slightly tangy and yet not too much as they had used a choriz fat seasoned mayo to cut the sourness. The Goan choriz contributed to delightful fatty nibbles. The 'potato' was present in form of crisps. Perhaps a bit more of that would have helped to give a more prominent crunch. This was one dish where I threw restraint to the winds and polished off.

The sandwich reminded me of Vir Sanghvi telling the chef at Farzi Cafe that Goan chorizo is going to be the ingredient of the year. He later wrote about it too. The choriz sandwich at SHD is a good example of why this ingredient works so well.

I was recently disappointed by the  dry rawas served at Sassy Spoon and wanted to try the version at Smokehouse. I was pleasantly surprised by how moist it was here. The rawas was cooked beautifully and not dry at all. The use of coconut milk powder gave it an alluring South East Asian feel that works for the Indian palate.


I am often disappointed by the steaks served in India as they tend to be over done. Again Sassy Spoon recently failed us by giving us an over cooked, chewy, steak.

The new menu at SHD has a well done roast and a pepper crusted steak. We went for the latter and I asked for it to be done medium rare. I wanted to see how it compared with what we had had at Sassy Spoon.

Again, like the rawas, the steak too was perfectly done even though they used local buffalo meat. It was slightly pink inside and very juicy. The crust of mixed crushed peppers gave it a slight heaty after taste which added to the flavour and the steak was seasoned well. Again a very strong dish along with the chorizo sandwich and the rawas.

I remembered our freind Gia who loves steaks and felt that we must get her here. I just hope they maintain the standard when Chef Gracias is not there. 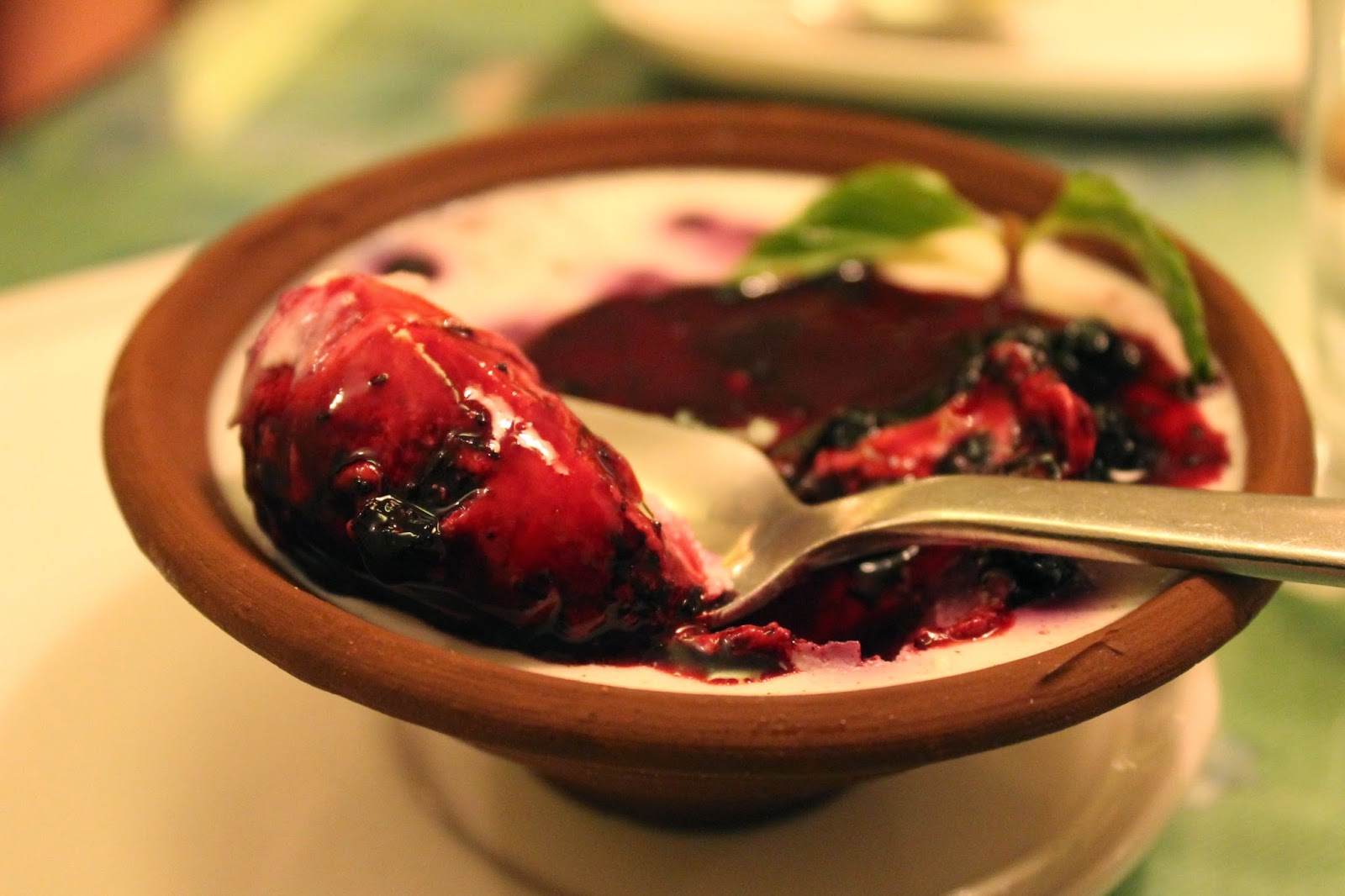 We went for the baked yogurt of the day and yesterday's one had a blueberry flavour. This was nice and chilled, summery, not overtly sweet. Quite like a Bengali mishti doi but had white chocolate in it and condensed milk which made the texture slightly firmer and the taste a bit more complex than mishti doi. The base is hung curd.
Chef Gracias wanted us to try the apple tartini. This is a deconstructed apple pie where they have used the apple pie filling of cooked apples and raisins and served it on a crisp crust instead of on a soft gooey pie. The contrast worked very well. Reminded me a bit of the fresh apple strudel that I had in Prague in our food walk there.

Chef Gracias said that they had tried to keep the desserts light and offer non chocolate and non cream based options.

At the end K and I both felt pretty happy with our dinner and the new introductions worked pretty well for us.