on February 06, 2015
(Note: This post was typed on my phone on the flight back so couldn't format it much and that's why the pictures are at the bottom.)

The nice thing about meets like the Madrid Fusion is that one gets to meet people from across the world who love food and write about it.

On the last night of the event  I met bloggers and journalists from Singapore , NYC, Sweden, Finland, Tokyo , Italy, Mexico and the Manila.

I noticed an interesting divide. The food journalists were pretty excited about the chef sessions and exhibitions at the Madrid Fusion venue. The bloggers I spoke to though were more keen on spending time outside the festival in the city. Turned out that they too like blogging about food and travel stories. The stuff inside the Madrid Fusion at times was a bit hard too core for us I guess.

The last evening of the festival was a bit of a change as the Madrid Fusion folks arranged a tapas tour for us.

We set off in small groups in our buses from our hotel, the Airport Pullman, for the tour.

Our first stop was a place called La Maquina, a part of a chain from what I understood from our interpreter. The place had a nice warm vibe and was filled with people who looked liked they were having a good time. There was a Real Madrid going on which they were showing on TV but I didn't really see folks following it. That seemed a bit strange in Madrid.

We got ourselves a table and were served a selection of tapas with our drinks. There was deep fried tender chopped cuttlefish served with mayonnaise and garlic aoli.

The ubiquitous tortilla served on bread. The egg and potato Spanish omelette. For a change this was served warm and not at room temperature or cold as if often the case.

Then came what was for me the highlight of the evening. Fried runny eggs served on deep fried tiny fish called cachelitas with fried green pepper on the side. You break the egg on the fish and then eat it. A bit like the Parsis who add an egg on top of every dish.

I found this dish, specially the combination of the runny yolk & fried fish, very addictive and kept nibbling on it though I knew there was more food coming. Bakshish Dean, a chef from Delhi, who was part of the group, said that the fried fish was like Indian bhajiya which explained why I liked it so much.

This was indeed the cliched love at first bite.

Our next stop was an interesting owner run place called Viavelez. Owner and chef, the ever smiling Paco, kept ruffling my scanty hair while he told us his story in Spanish.

Apparently he once ran a Michelin starred restaurant in Asturius in the coast of North Spain. He then moved to Madrid in hopes of tapping a larger audience than that in his village. He still procures produce from Asturius and uses a lot of seafood in his tapas (Spanish small plates had with drinks).

We had the mayonnaise based Ruso Ensalata or the Russian Salad that the Parsi caterers of Mumbai dish out. Paco's version had shredded salmon in it.

Then there was a flavoursome green bean, chorizo and seafood soup which got an incredible flavour from the chorizo. Felt good to have the warm soup in the cold evening.

Finally there was 'tigre', Paco's creation which had a steamed mussel in what seemed like a basil dip, a deconstructed mussel shell made with a crisp wanton skin and squid ink placed on a warm, spicy, creamy, sea food infused base. This was our favourite dish here.

We were told by Jerry, an American wine writer who keeps coming to Spain, that Paco has a very good range of wines. I noticed that evening that while most of the Europeans were having wine or beer, most Asians, including me, stuck largely to water and juice in the tapas tour!

Our next stop,  Palatea was very different from Paco's little restaurant. Palatea is a large multi level restaurant with a large patio. It's lit like a casino. Feels pretty glitzy. Here we had the fried ham croquettes, fried cod bacalow (if I've got the word right) and empanada, the puff pastry dish pie like dish which has traveled from Spain to South America.

Fully stuffed we headed to our last stop. A restaurant called Cinco Jotas. From what I understand they rear Iberico pigs used to make the Jamon Iberico, the champagne of Spanish hams, that I love so much. There was a professional ham cutter making thin slices for us and some of us tried our hand at it too. I cut myself a slice and as I munched on the jamon Iberico, I thought that it was really apt that my last taste of my last night Spain was of the jamon Iberico that keeps drawing me back to Spain.

To wash it down was a refreshing tomato based Spanish cold soup, whose name I didn't catch, which I was told was more 'powerful' than gazpacho. Had a better body I guess. This was the perfect refreshing  end to a night of heavy eating.

Yes, the tapas tour was definitely the one of the most memorable moments of Madrid Fusion for me as was meeting food writers and bloggers from across the world.

Disclaimer: This trip to Madrid was hosted by Spanish Tourism & Madrid Fusion. 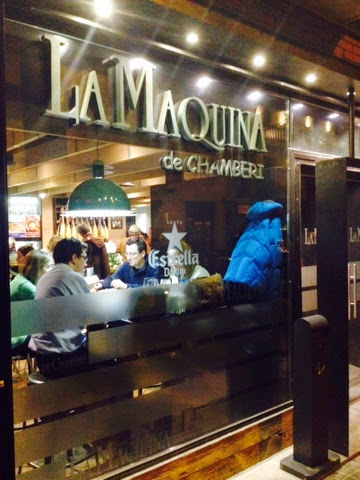 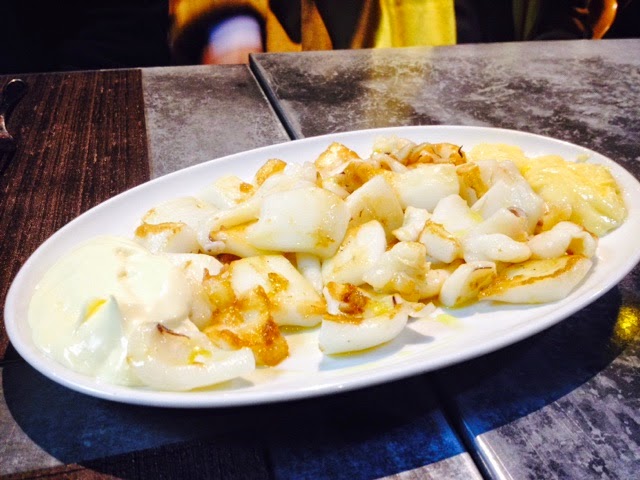 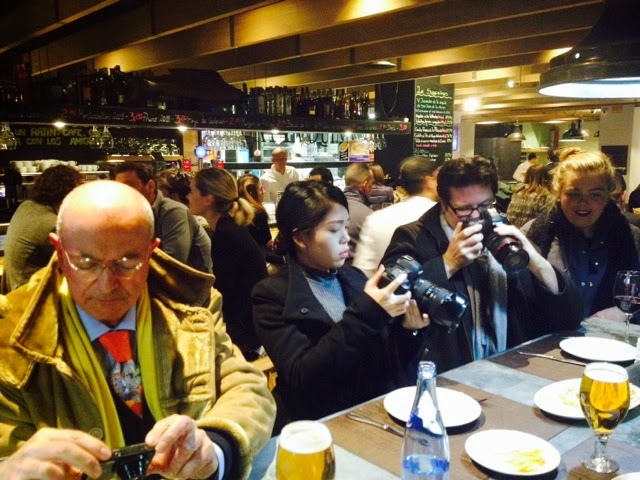 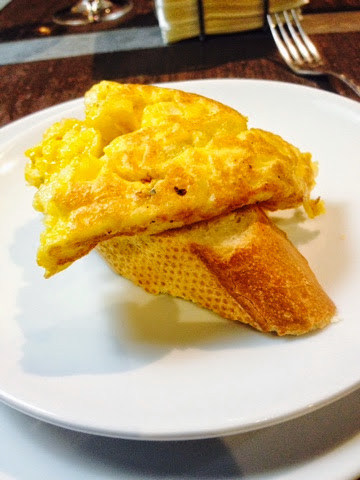 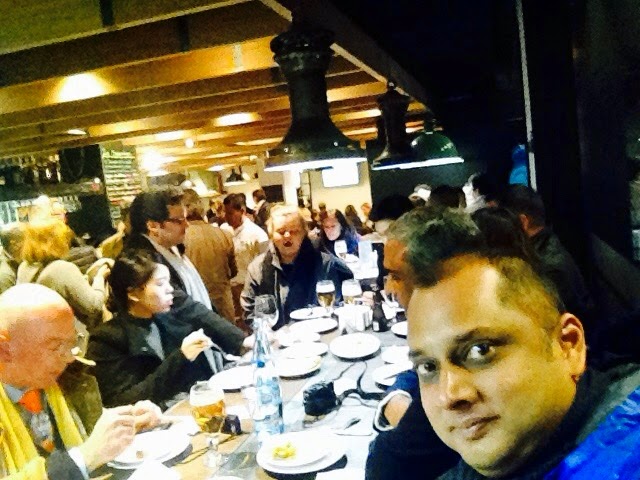 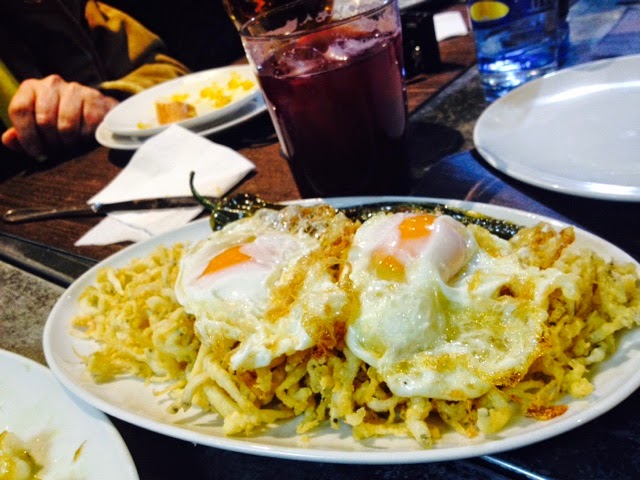 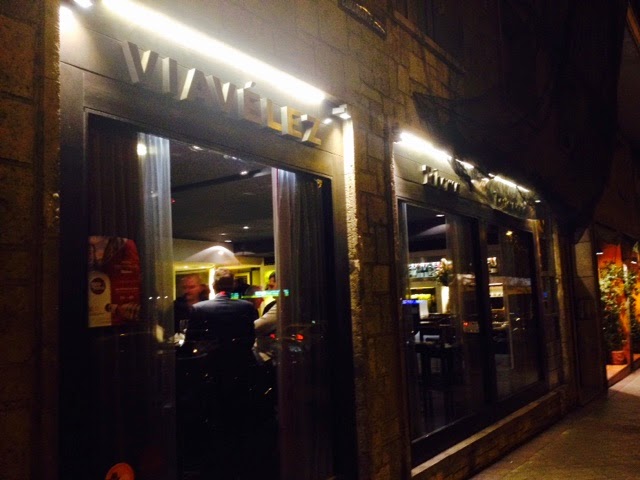 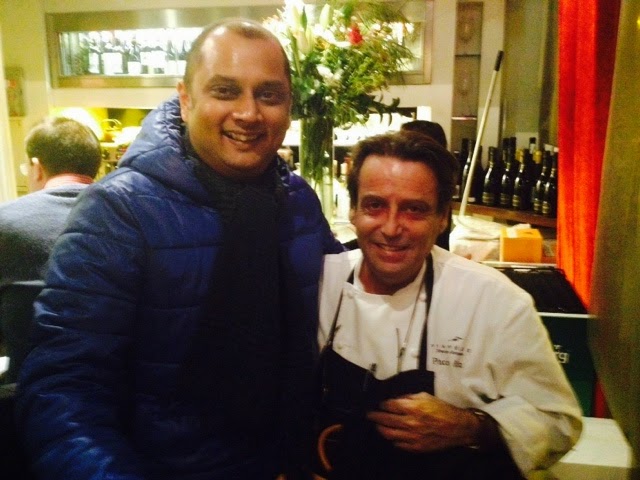 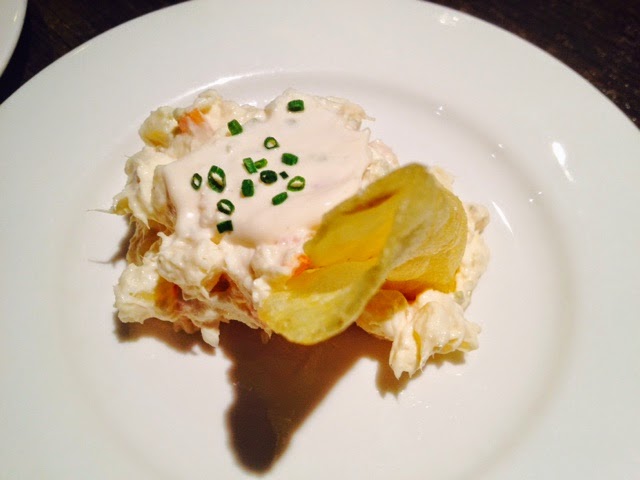 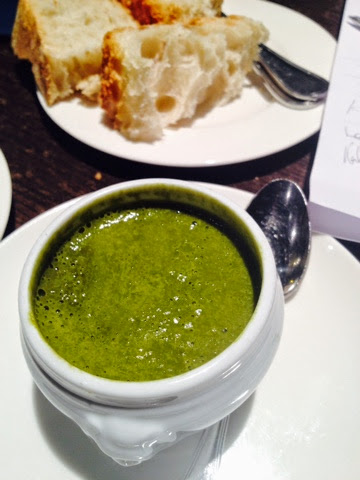 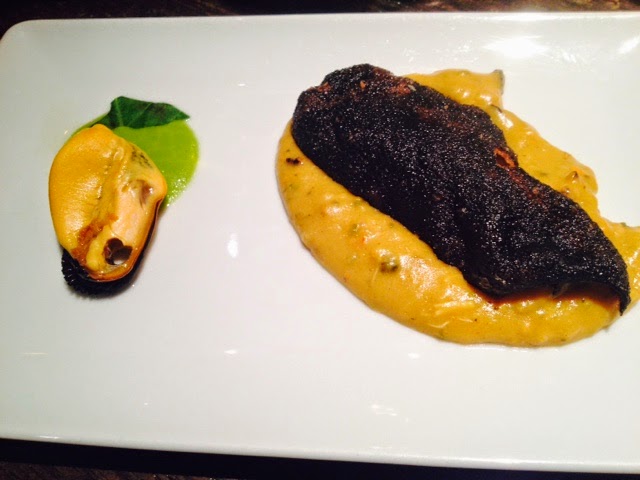 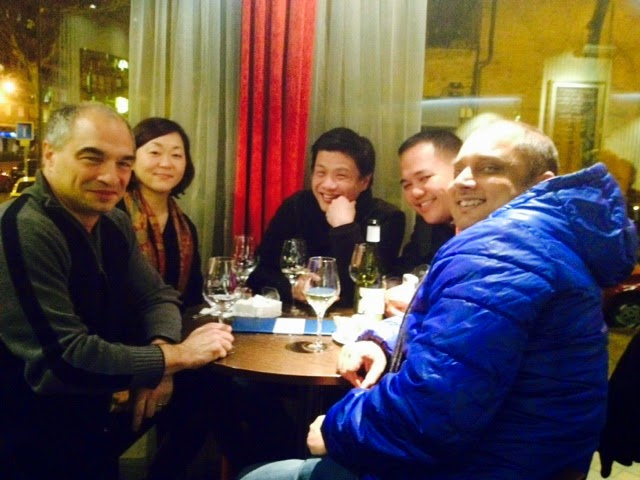 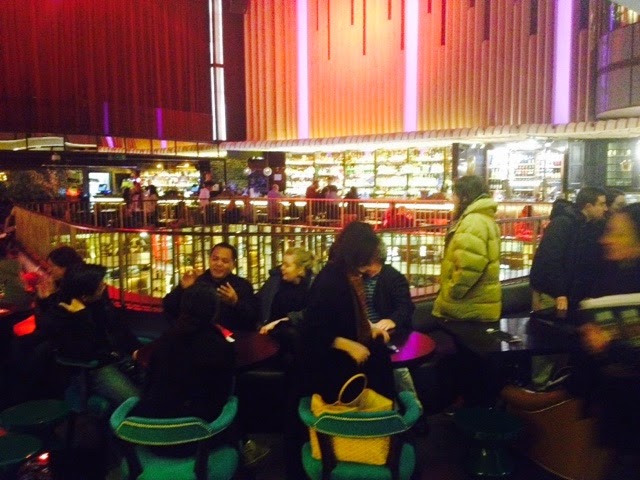 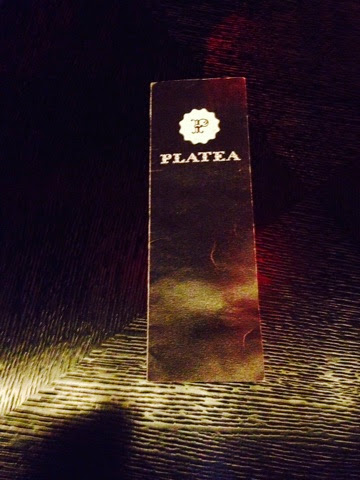 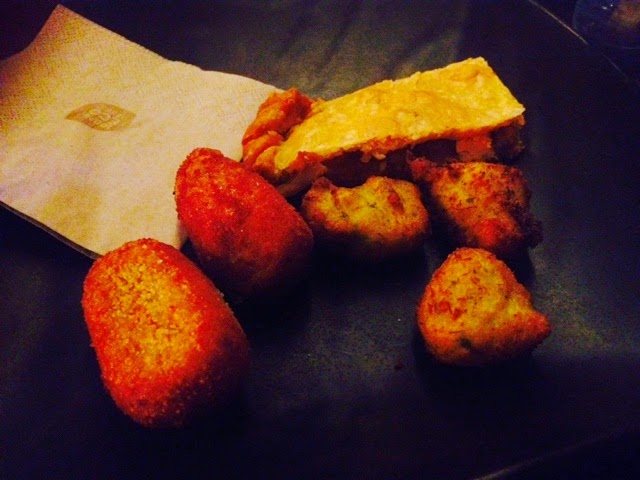 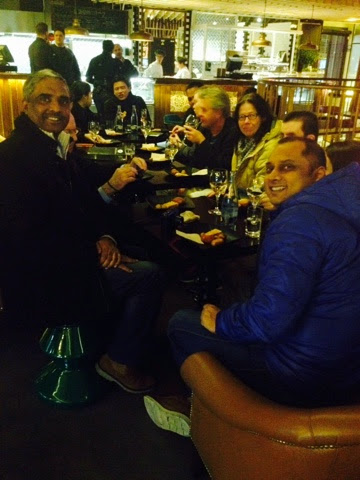 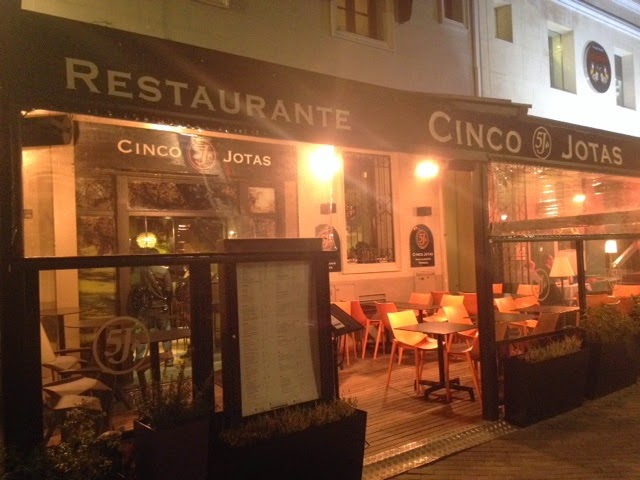 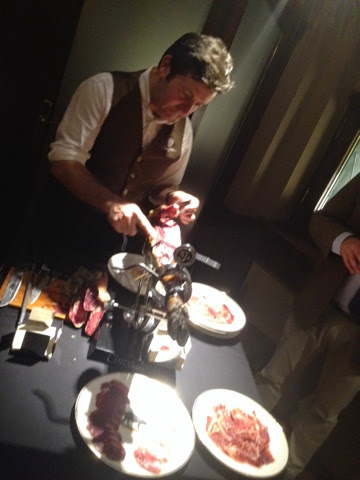 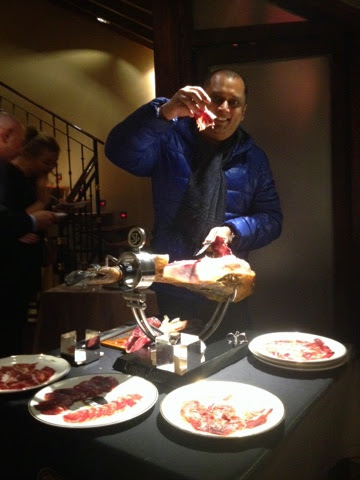 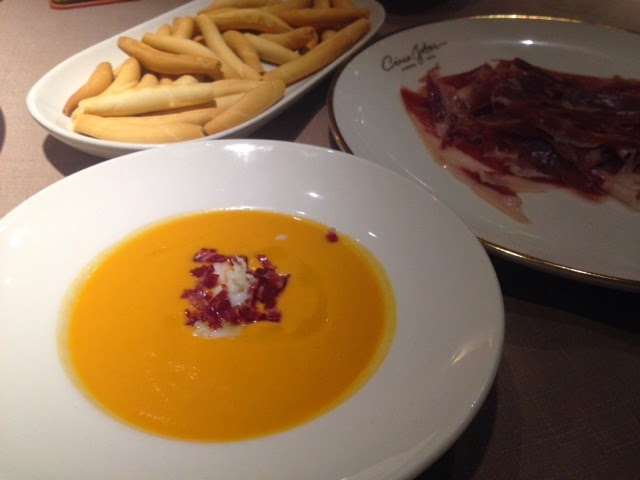 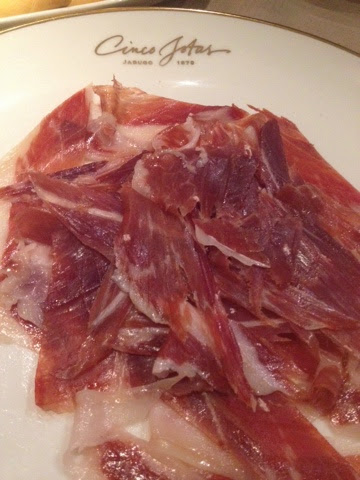 sonali said…
The gazpacho like cold soup was salmorejo?

sonali said…
The gazpacho like cold soup was salmorejo?