on February 01, 2015
Asado means to roast or to grill in Spanish

I went to the preview dinner of a restaurant called Asado a few days back.

It is scheduled to open on the 1st of February 2015 at Bandra's SV Road. It claims to be Mumbai's first Latin American restaurant.

The ambience is that of a casual cafe of the sort you can expect to see in the touristy streets of Barcelona and even makes a reference to La Ramblas there. The restaurant was full for the preview and seemed a tad cramped when full despite spilling over two sections. Perhaps the regular seating will be a bit different. 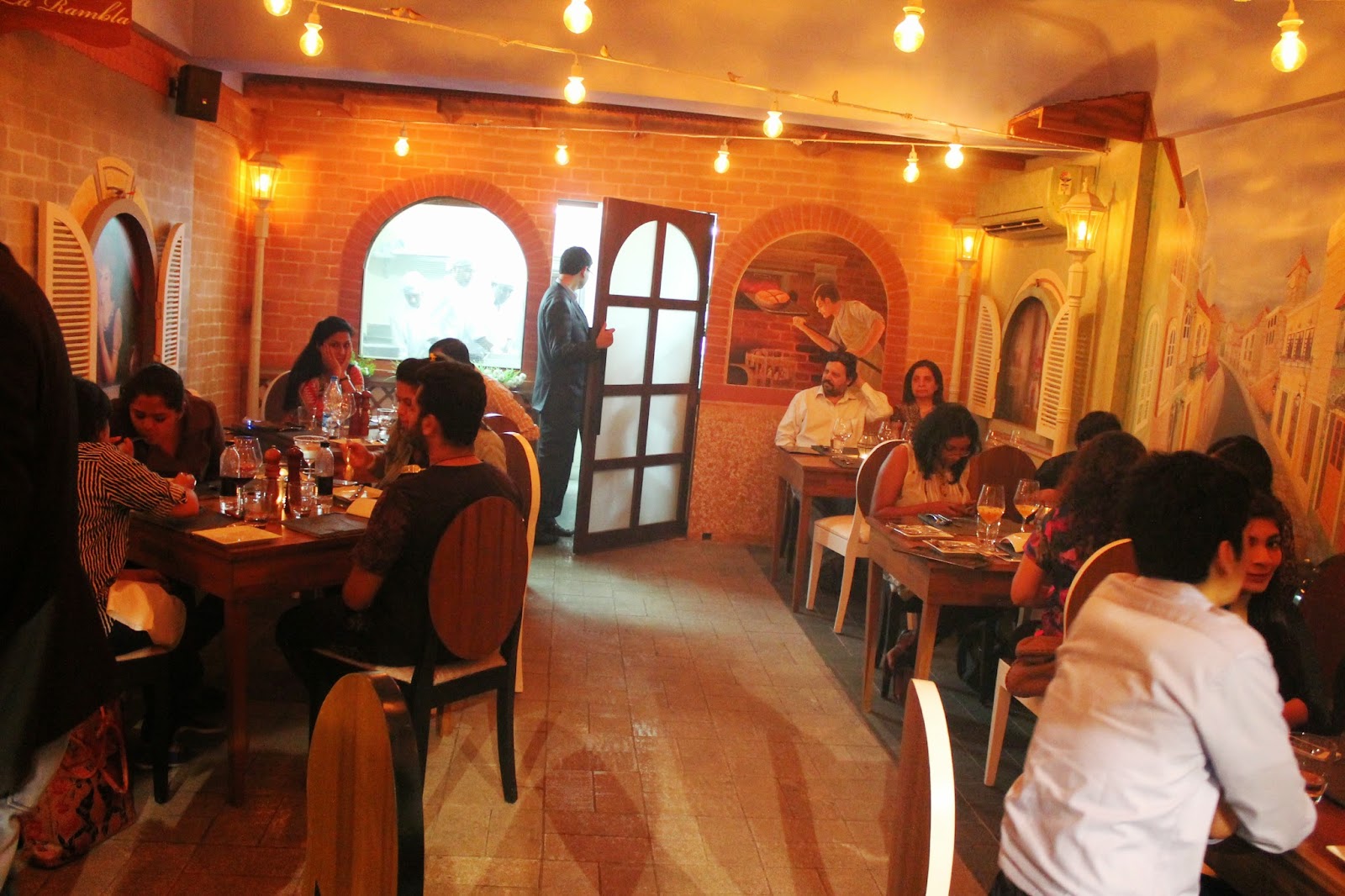 The definition of 'Latin America' is of course very broad. The menu shared with us didn't pinpoint dishes to specific countries. That would have made it more interesting in my opinion.

I haven't been to any part of Latin America yet so have no idea how authentic the dishes were.

Well nor, it seems, has the Bengali chef of Asado been to Latin America. I am told that he got his training in LatAm cooking while chefing in 5 star hotels in Seychelles and Mauritius and later in Sancho's in Bandra.

They plan to import a lot of their ingredients here and that will hopefully give a more authentic touch to the food. I do wonder where the 'Cantonese' mentioned in the press release fitted in though.

I tried some of the dishes in the review and here's what I liked:

The Gorgonzola pistachio parmesan soup was the star of the vegetarian dishes. The counterpoint given by cauliflower mash to the sharp Gorgonzola left one with a pleasantly creamy soup. 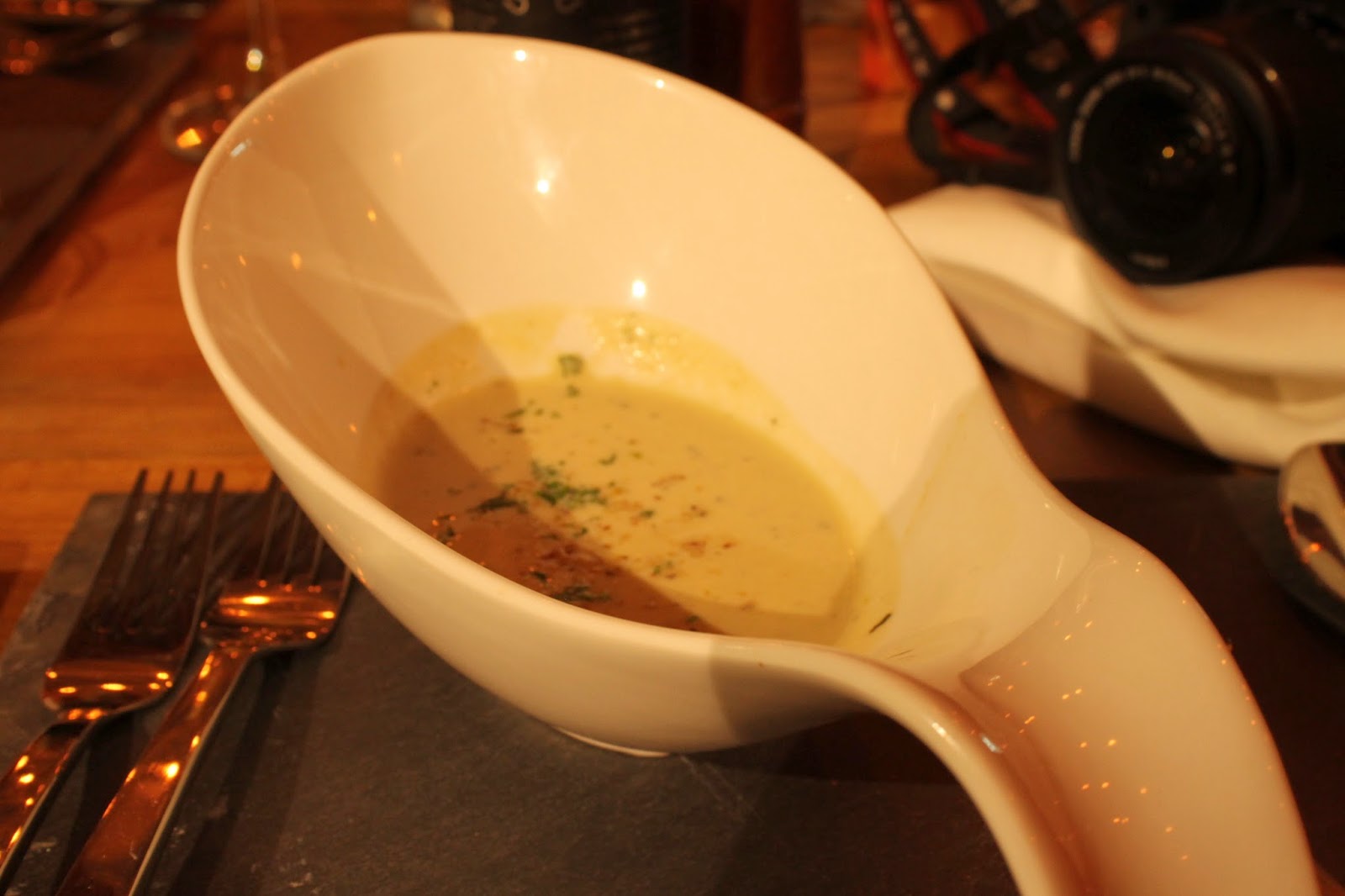 The kataki pastry prawns, which featured juicy prawns encased in a crisp angel hair pasta shell, was served with two contrasting dips of corn puree and a sharp mango salsa was a great starter. 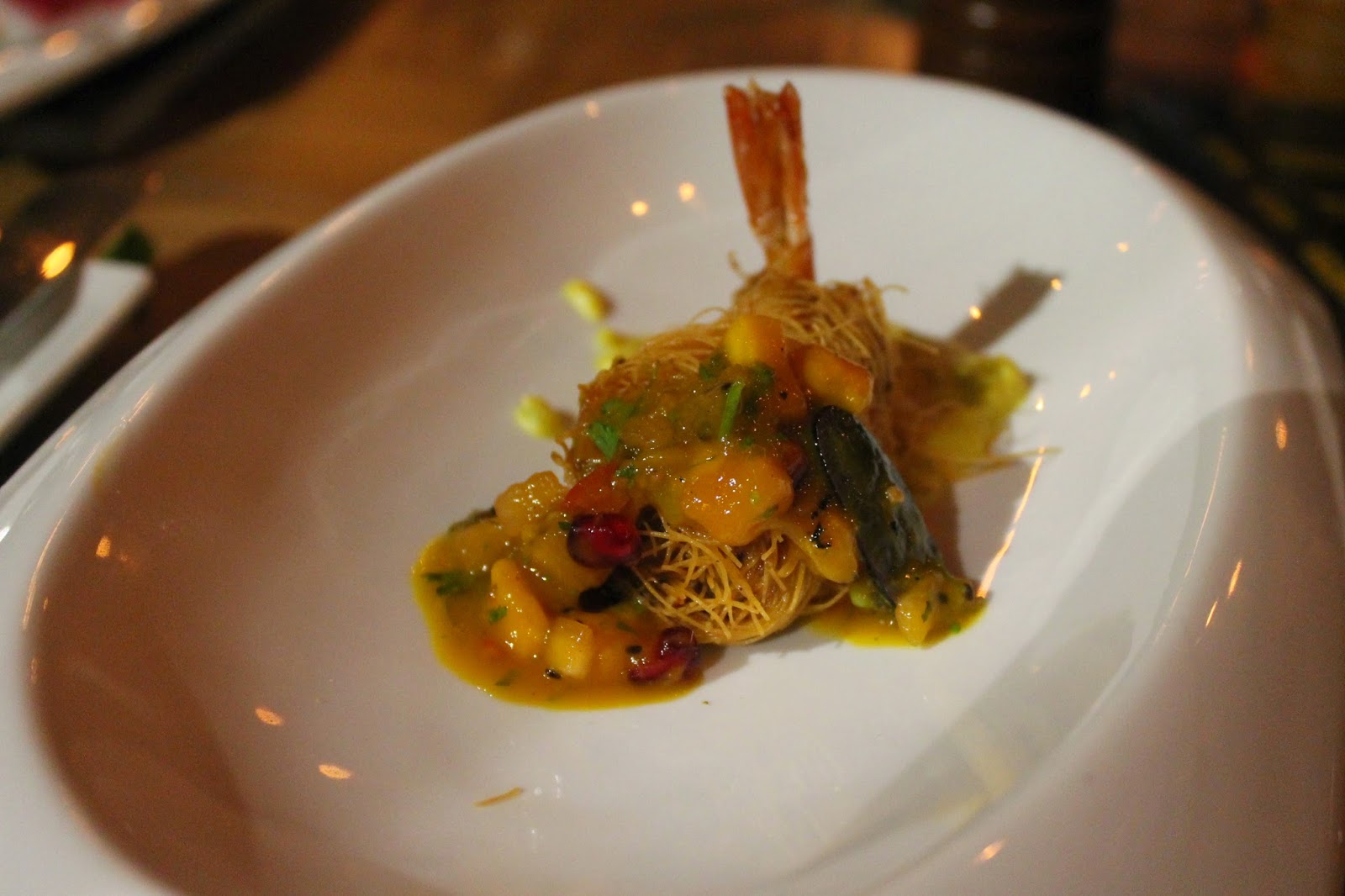 As were the batter coated and juicily fried squids. Both were examples of treating seafood with respect in the kitchen and not overcooking it. 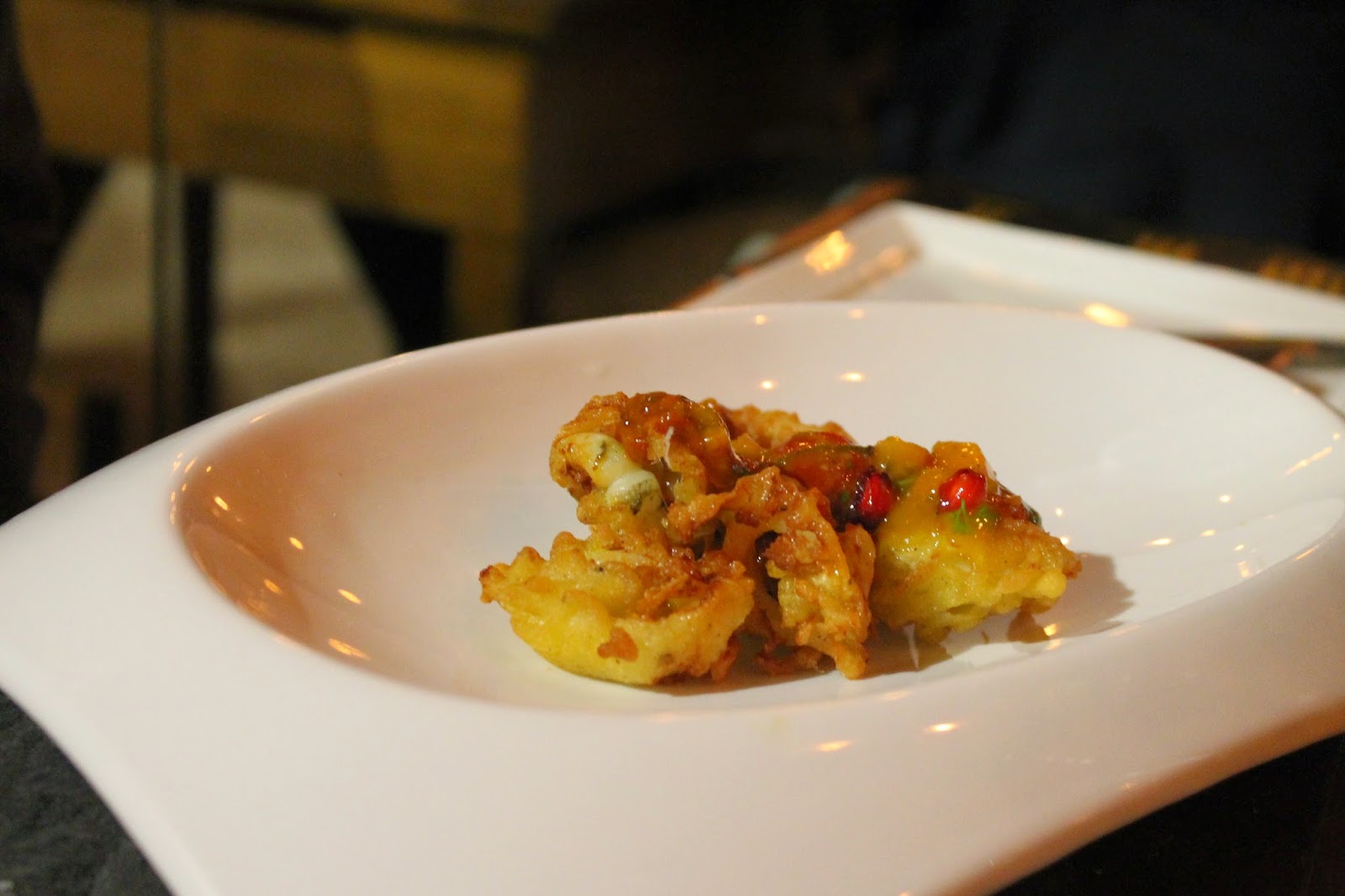 The two mains of truffle 4 mushroom fettuccine and edamame and truffle risotto both had strong hits of truffle and were fairly creamy and full flavoured. Both had a lovely texture and were not too runny as risottos and pastas in Mumbai often tend to be. The crunch of the edamame gave a nice contrast to the rice of the risotto.The two Italian dishes seemed strange in a Lat Am menu but are apparently a tribute to the European migrants to Latin America. I am told that each of these will cost about Rs 650 each. We had tasting portions so don't how much the final quantity will be. Truffles, of course, are expensive.

The chicken enchiladas were made with corn based and not flour based enchiladas in keeping with the Mexican tradition. Our friend Suprio, representing Mumbai Food freaks, who has lived in Chile, pointed this out. They were served with refried beans and a serving of rice and the dish tasted like comfort food.

The juicy Brazilian tenderloin, cooked on the lava stone grill, that we tried is a sign of exciting things to come given their plans to import meat. The steak was flecked with specks of chilli but depended on the taste of good meat to pull it through. The dish is going to be priced at around 1,000 Rs a plate. Not the sort of pricing that sits well with the casual and crowded tavern-like ambience of the place. 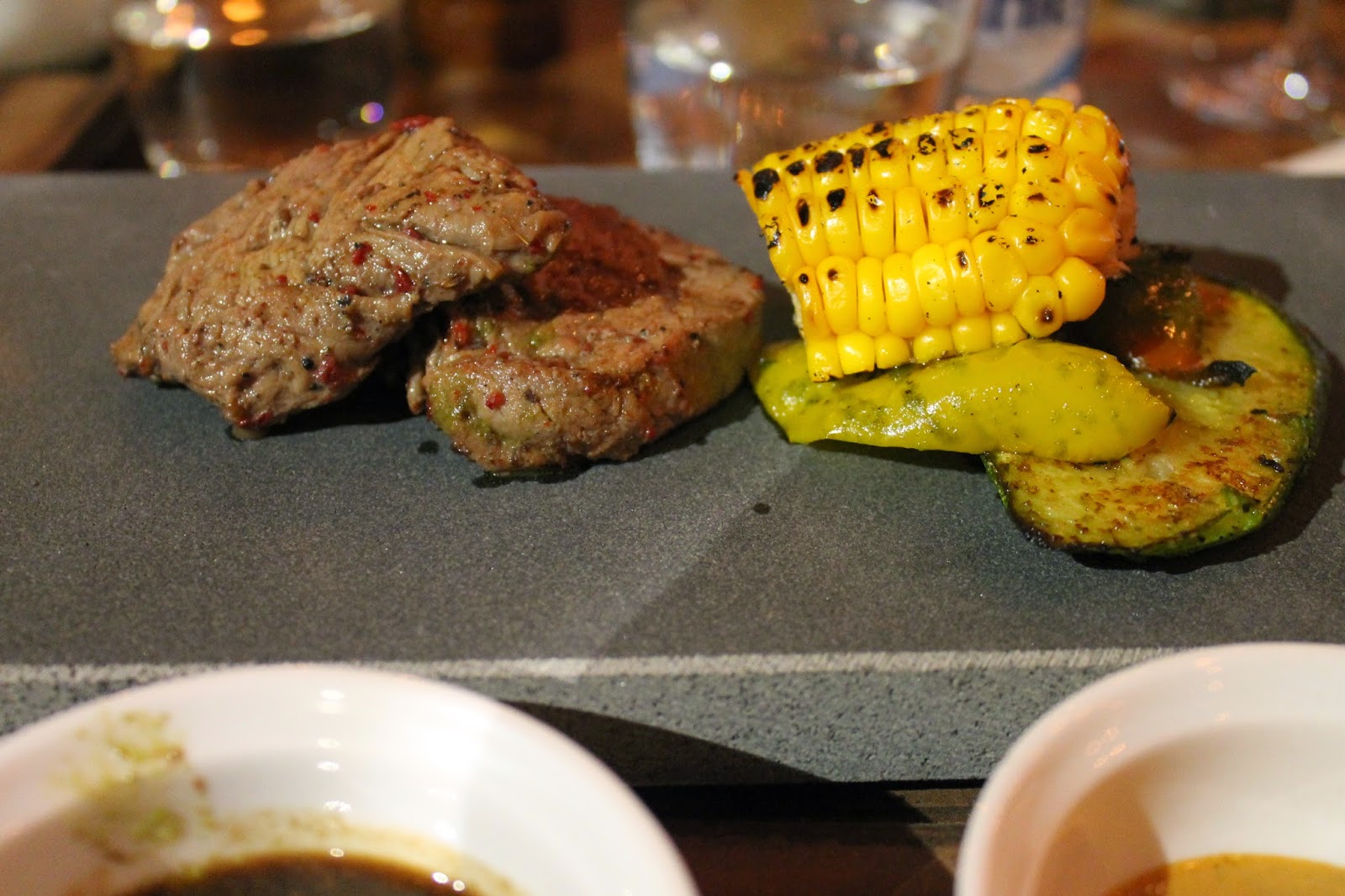 The caramelised pork belly salad was undone by slices of pork that were too crisp. The salad had a nice crunch but imagine me liking the leaves more than the meat in a dish which has pork belly! I missed the chubbiness one associates with pork belly here. 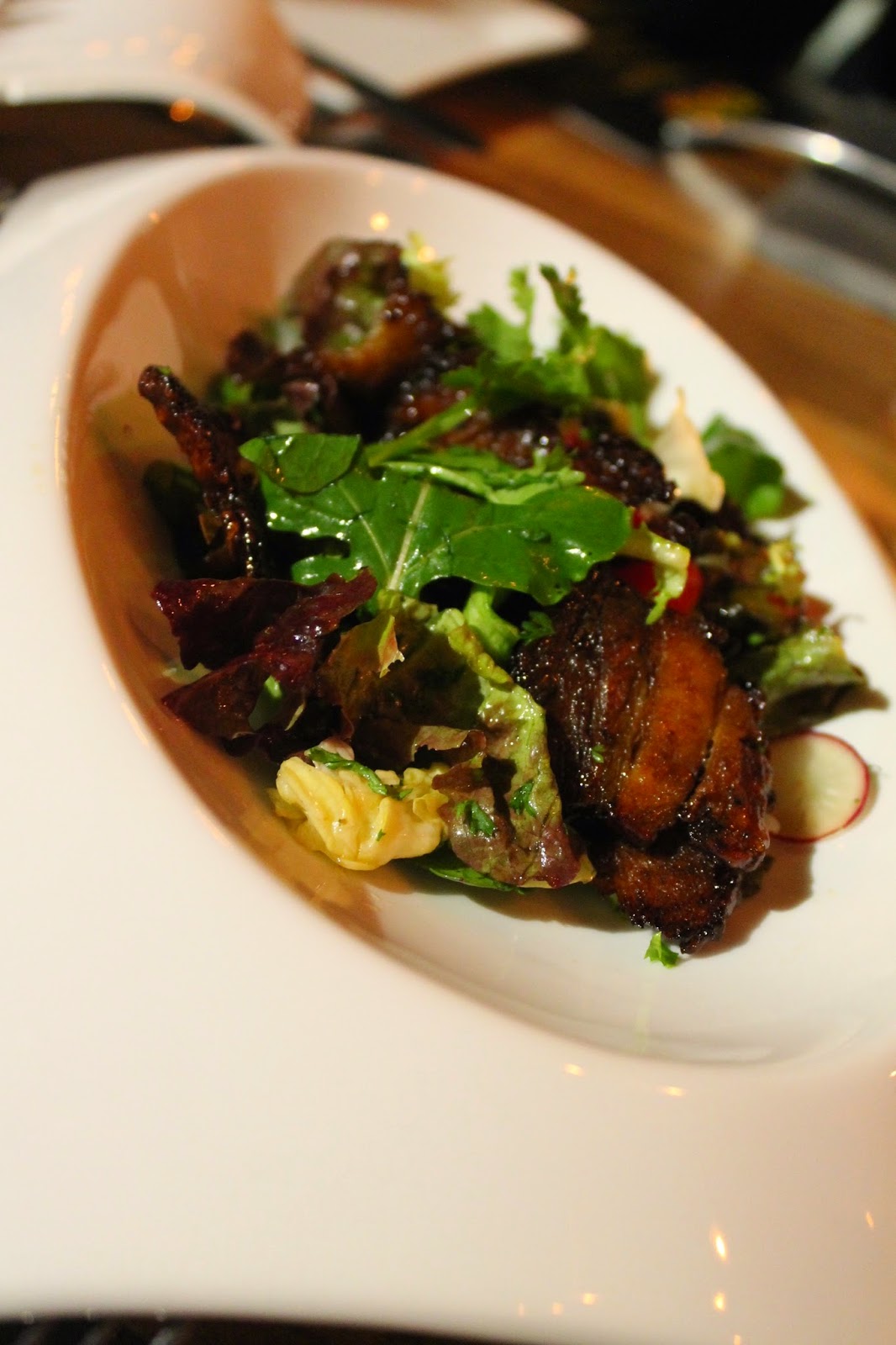 The Mexican seafood soup was rather spicy and didn’t really bring out the flavours of the seafood which had been overcooked. A prawn that I tried in it tasted a bit off. 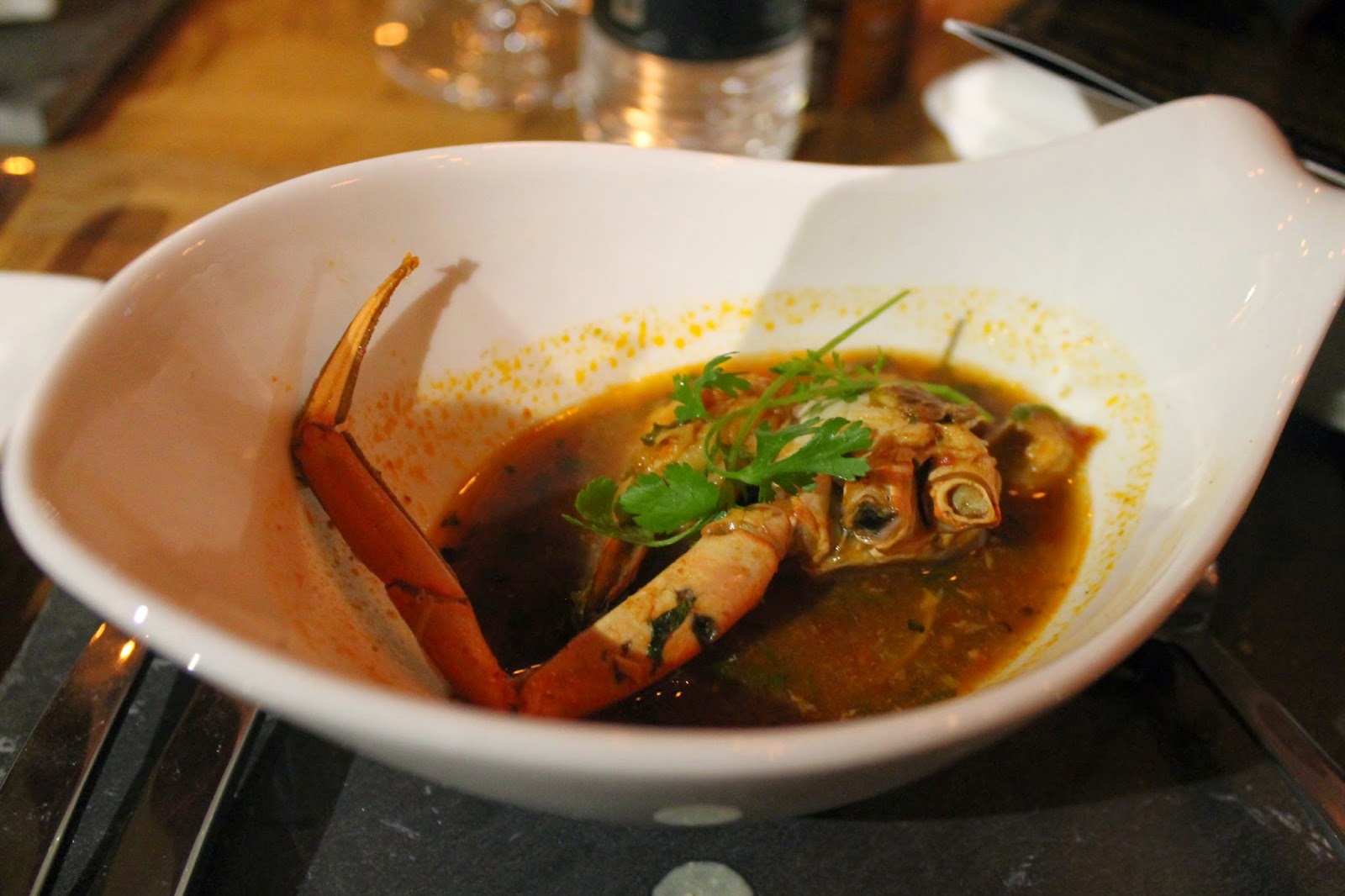 The baked parmesan polenta was overpowered by the excessively sweet fig topping. The vegetable flautas seemed no different from the spring onions served in a local Chinese restaurant.

Their desserts need some working as the churros served were flat and lacked crunch. You get more authentic and better churros in San Churros in Waterfield road 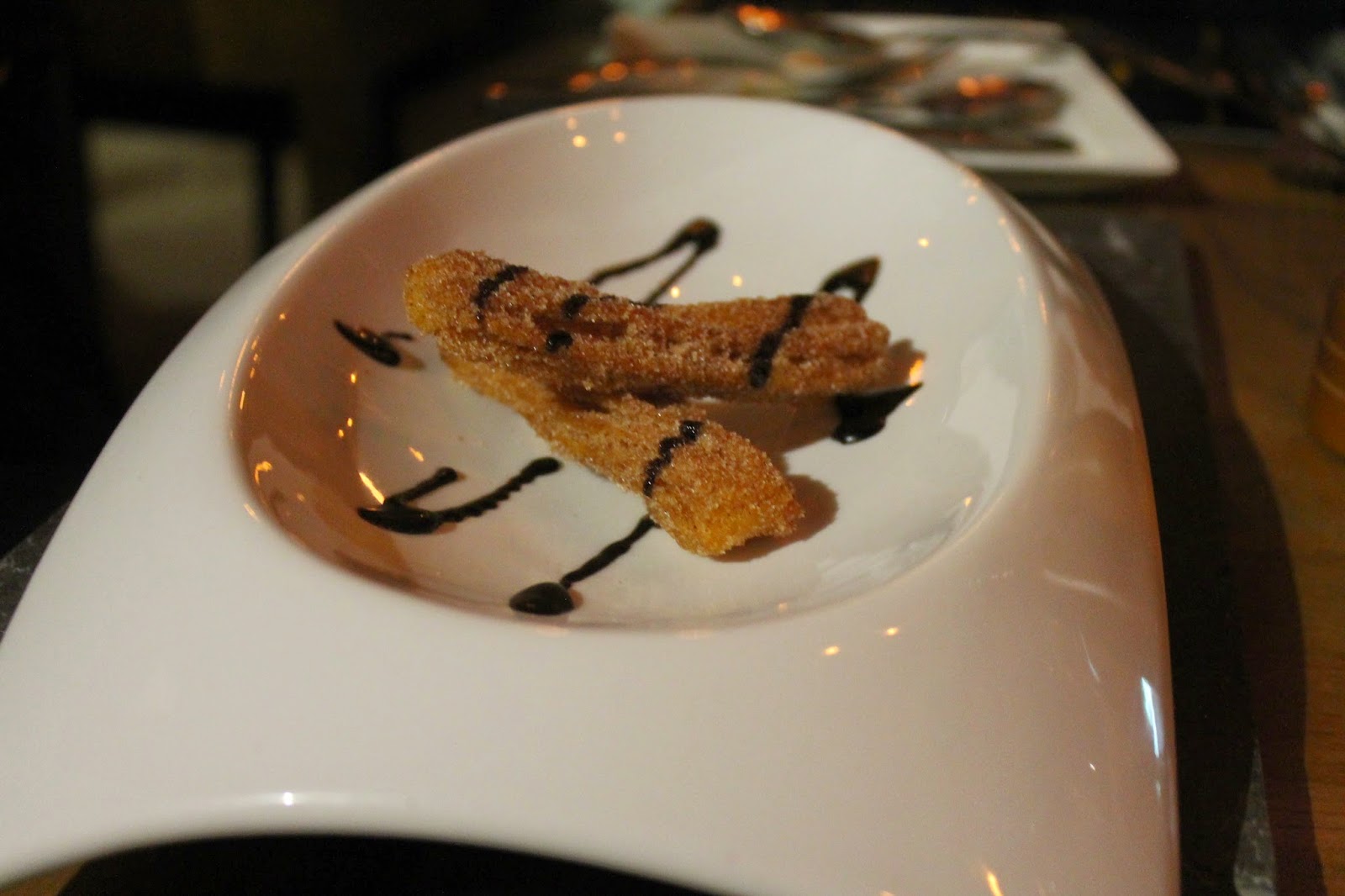 At the end I was left wondering if Mumbai needs more such places offering international food cooked by Indians or whether we could do with some restaurants offering Indian regional food.

While it doesn't have to be an either or situation, there hardly seems to be any new restaurant launches focusing on the Indian food scene here.

That makes me sad.

What's your take on this? Does Mumbai need more of world cuisine places? Does our international cuisine really match up? Do we need more Indian joints? Are Indian regional cuisines that well represented in Mumbai?

Kalyan Karmakar said…
well no way for me to figure out yet Anurga. And for most who will go there I guess
2 February 2015 at 03:20