Calling for fish in Mumbai. The Seafood and Meat Company 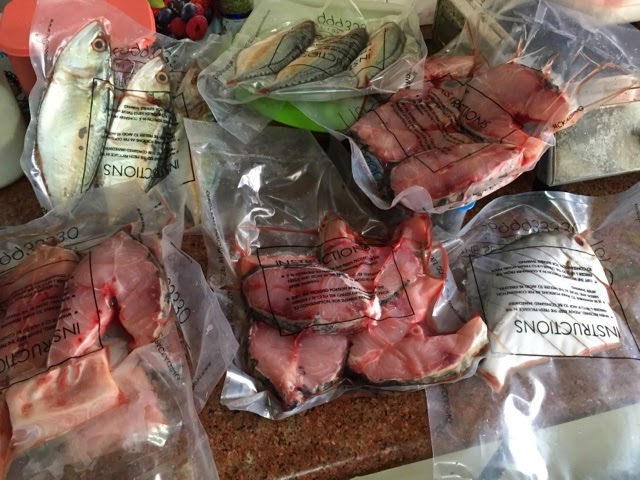 Not been able to make it to the fish markets in a while so called in for mackerel, rawas (Indian salmon), pomfret, katla from www.seafoodandmeatco.in yesterday

Pros: Eazy to use website, COD, followed up with me in delivery time on phone , fish was sent washed, cleaned & in small vacuum packed portions, seemed fresh, at least an option when you can't/ don't want to go to fish market. We had earlier tried some prawns which they had sent as a sample which were brilliant

Cons: While per kilo prices seemed similar to market overall order was more expensive than market as I had to order larger portions than I normally buy, the fish was not cut the way I would have liked (I like my gaada to be cut into squares) and the salmon fillets to be cubed. Update: Just been told that you have to ask for a lady called Mangal to explain the sort of cut you want 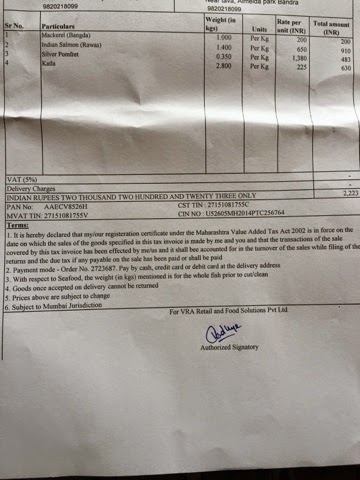 How was the fish?

We baked some mackerel yesterday in a turmeric, chilli, salt & lime and turned out to be moist and flavoursome

Had this with steamed soya garlic broccoli (made by Banu from Gia Claudette Fernandes's recipe) which I stirred into plain rice and soya sauce in a pan.

The rawas was reasonably moist and distinctly flavoured and meaty. 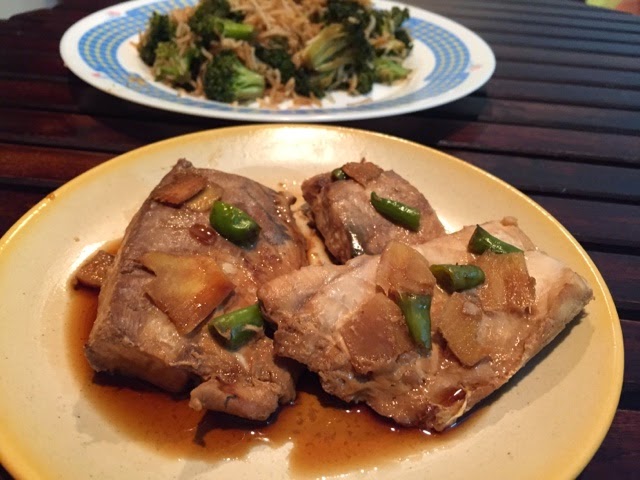 I like going to to fish markets and will head back once my back is better but till then this is a good option.


Not sure if you know but I write for a site called EazyDiner as the lead critic for Mumbai. Currently you will find my articles in the EazyTrends section which consists on pithy posts on the food world. Here's the latest one on basa which fish lovers might relate to
iPhone pics Mobile Blogging mumbai pisces

Kalyan Karmakar said…
Shiv, these were 6 biggish ones for 200 and they sell it per kilo and not by piece. Local fish monger would be cheaper on the whole
13 April 2015 at 19:17

suvro said…
One of the joys when I visit Calcutta (living in LA) is the fish market - the fresh fish, or caught the night before.
When we visited the fish market in Venice, Italy last August, we were delighted to see such a rich variety of seafood, and all so fresh. It is a pity that living on the Pacific coast, we cannot get such fresh seafood here.

This time in Calcutta (March 2015) I saw Spencers was also selling fish on ice - in a more hygienic environment than the regular fish markets.

Gia Fernandes said…
Didn't they ask how you wanted the fish cut when you placed the order. I used to order from Pesca Fresh earlier and they always asked first, and then cut the fish the way I wanted. The vacuum sealed packs seem like a good idea but I would be wary about storing them in the freezer directly without washing the fish first. I know they clean and wash the fish before sending, but I'm paranoid and don't trust anyone so I wash and wash with a lot of rock salt :)
15 April 2015 at 20:24

Kalyan Karmakar said…
Gia, I must confess that we were happy to put them in just as they were sent. They didn't ask how I wanted it cut but I later got to know that they have a lady who specialises in getting it cut the way you want
16 April 2015 at 01:44

Gia Fernandes said…
I suspected, that's why I mentioned it :) It's cool though, I'm sure Bandu will wash the fish after defrosting and before cooking. Like I said, I'm paranoid. And they should have asked you how you wanted your fish cut, especially when they have someone to do it!
16 April 2015 at 11:32

Nichole said…
Fish is a delicious source of Omega 3. It can be quick cooking, tasty, and super healthy option. Although I didn't know much about Indian cuisine, but this Fish recipe looks quite appetizing.
16 April 2015 at 18:12