on April 09, 2015
My latest article is Femina is talks about my serendipitous meals in Penang.

Hope you can read this. The original text follows after the pic 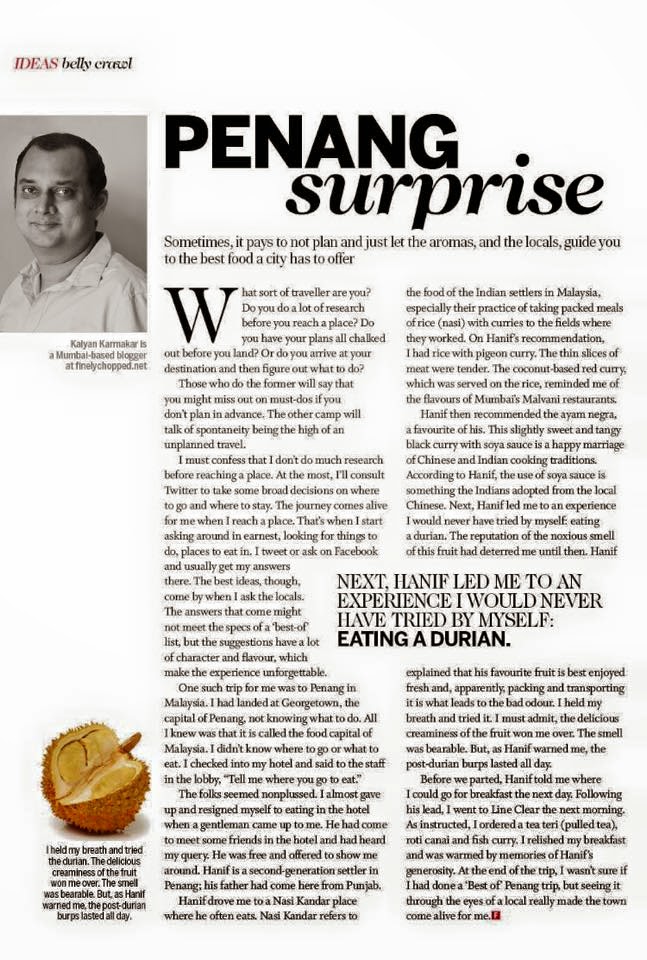 What sort of a traveller are you?

Do you do a lot of research before you reach a place? Do you have your plans all chalked out before you land? Or do you arrive at your destination and then figure out what to do?

Those who do the former will say that you might miss out on must dos if you don't plan in advance. The other camp will talk of spontaneity being the high of an unplanned travel.

I must confess that I don't do much research before reaching a place. The odd twitter query at the most to take some broad decisions on where to go and where to stay is the most I do. The journey comes alive for me when I reach a place. That's when I start asking around in earnest looking for things to do, places to eat in. I tweet, ask on Facebook and normally get my answers. The best ideas though come by when I ask locals on where to go to eat. The answers that come might not meet the specs of a 'best of' list but the suggestions have a lot of character and flavor which make the experience of following them unforgettable.

One such trip for me was to Penang in Malaysia. I had landed at Georgetown, the capital of Penang, not knowing what to do. All I knew was that is is called the food capital of Malaysia. I didn't know where to go or what to eat.

I checked in to my hotel and then asked the staff in the lobby about where to go to eat. 'Tell me where you go to eat. I will go there' I said.

The folks seemed nonplussed and didn't know how to react. I almost gave up and resigned myself to eating in the hotel when a gentleman came up to me. He had come to meet some friends in the hotel and had heard my query. He said he was free and offered to show me around.

He told me that his name is Hanif. That he is a second generation settler in Penang and that his father had come here from Punjab.

Hanif offered to take me around and he took me in his car to a Nasi Kandar place where he often eats. Hanif explained that Nasi kandar referred to the food of the Indian settlers in Malaysia and their practice of taking packed meals of rice (nasi) with curries to the fields where they worked.

On Hanif's recommendation I had rice with pigeon curry. The thin slices of meat were tender. The coconut based red curry, which was served on the rice, reminded me of Mumbai's Malvani restaurant curries.

Hanif asked me to try the ayam negra, a favourite of his. This slightly sweet and tangy black curry has soya sauce in it and is a happy marriage of Chinese and Indian cooking traditions.

Hanif next led me to an experience I woukd never have tried by myself. Eating a durian. The reputation of the noxious smell of this fruit had deterred me till then. Hanif explained that this favourite fruit of his is best enjoyed fresh. Apparently packing and transporting it is what leads to its bad odour.

I held my breath and tried the fruit. I must admit that the delicious creaminess of the fruit won me over. The smell was bearable. As Hanif warned me, I did have post durian burps through the rest of the day.

Before bidding me goodbye Hanif told me where I could go for breakfast the next day.following his lead I went to a place called Line Clear the next morning. I followed Hanif's lead and ordered a tea Teri (pulled tea) and roti canai and fish curry. As I relished my breakfast I fondly remembered Hamid's generosity to take the time out and take me around.

At the end of the trip, I wasn't sure if I had done a ,
'Best of' Penang trip but seeing it through the eyes of a local really made the town come alive for me.
articles Femina food media Penang Live

Antara said…
Feels good somebody apart from me has come back from Penang without making it to the much acclaimed Gurney Drive. Trust me I tried, with and without a map, on our rented scooty and somehow could never find the damn place. But it was a beautiful place nevertheless, lots of good food and old world small town charm despite the furnace of a weather
1 May 2015 at 16:48