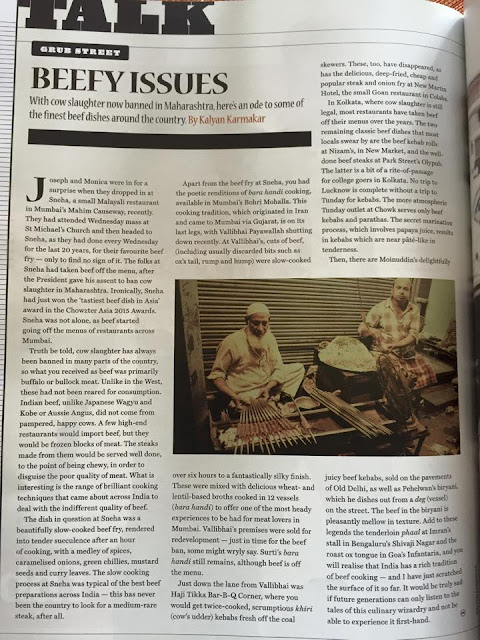 I had written an article on popular beef dishes in India for the MW magazine some time back.

Ironically that was a week when I had an article out in a men's magazine and in a woman's magazine (Femina)!

Here's the text of the article:


Joseph and Monica were in for a surprise when they dropped in at Sneha, the small Keralite restaurant at Mumbai’s Mahim causeway, recently.

They had just come out of the Wednesday mass at St Michael’s Church and then headed to Sneha, as they did for every Wednesday for the last twenty years. They had come for their favourite beef fry only to find that it was not on the menu this time.

The folks at Sneha had taken off beef from the menu after the news of the Presidential Assent given to the Maharashtra Cow Slaughter act. Ironically Sneha had just won the ‘Tastiest beef dish in Asia’ award for the beef fry in the Chowzter Asia 2015 Awards.

Sneha was not alone as beef started going off the menus of restaurants across the country.

The beef fry at Sneha was a beautifully slow cooked one which was rendered into tender succulence after an hour of cooking with a medley of spices, caramelized onions, green chillies, mustard seeds and curry leaves.

The slow cooking process of the beef fry at Sneha was typical of most famous beef preparations across India. India was never best place to look for a medium rare steak after all.

Cow slaughter was banned across the country so what you got as beef was primarily buffalo or bullock meat. Unlike in the West, these were not reared for consumption. Indian beef unlike Japanese Wagyu and Kobe or Aussie Angus, did not come from pampered happy cows.

A few high end restaurants would import beef but those would be frozen blocks of meats. The steaks made from them would be served well done to the point of being chewy in order to disguise the poor quality of meat.

What is interesting is the range of brilliant cooking techniques that had come up across India to deal with the indifferent quality of beef that was locally available.

Apart from the beef fry of Sneha you had the poetic renditions of the bara handi cooking available in Mumbai’s Bohri Mohalla. This cooking tradition, which had originated from Iran and come to Mumbai via Guajarat, was on its last legs with Vallibhai Payawallah shutting down recently. At Vallibhai’s, cuts of beef, including the usually discarded cuts such as ox’s tail, rump and hump, were slow cooked over six hours to a poetic silky finish. This was mixed with delicious wheat and lentil based broths cooked in twelve vessels (bara handi) to offer one of the most heady experiences to be had for meat lovers in Mumbai. Vallibhai had recently shut down as the premise was sold off for redevelopment. Just in time for the beef ban some would wryly say. Surti’s Bara Handi still remains though beef is off the menu.

Just down the lane from Vallibhai was Haji Tikka Bar-B-Q Corner where you would get twice cooked, scrumptious khiri (cow’s udder) kebabs fresh off coal skewers. These too have disappeared as have the delicious deep fried, very cheap and very popular steak and onion fry at Martin’s, the small Goan restaurant at Mumbai’s Colaba.

In Kolkata, where cow slaughter is still not illegal, most restaurants had taken off beef of their menu over the years. The two remaining classic beef dishes which most Kolkatans swore by were the beef kebab rolls at Nizam’s in New Market and the well done beef steaks at Park Street’s Oly Pub. The latter was a bit of a rites of passage for college goers in Kolkata.

No trip to Lucknow would be complete without a trip to Tunday for kebabs. The more atmospheric Tunday outlet at Chowk served only beef kebabs and parathas. The secret marination process, which involved papaya juices, resulted in kebabs which were near pate like in tenderness.

Then there were Moinuddin’s delightfully juicy beef kebabs sold on the pavements of old Delhi as well as Pehelwan’s biryani, which he dished out from a deg (vessel) on the streets. The beef in the biryani was near pleasantly mellow in texture.

Add to these legends the tenderloin phaal at Imran’s stall in Bangalore’s Shivaji Nagar, the roast ox tongue at Goa’s Infantaria, and you will realize that India had a very rich tradition of beef cooking and we have just scratched the surface of this here.

It would be rather sad if future generations can only listen the tales of this culinary wizardry. 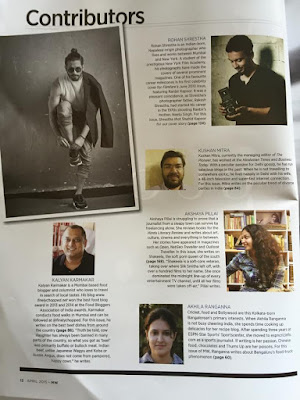