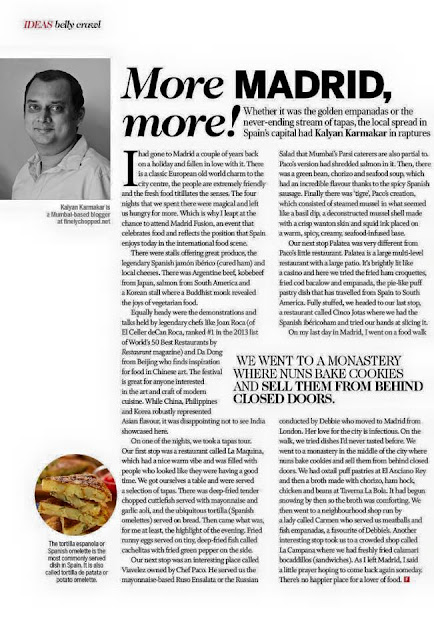 My article on my recent Madrid trip came out in the Femina sometime back.

Finally getting around to uploading it here.

Here's the unedited text if you can't read from the picture:


I had gone to Madrid a couple of years back on a holiday and fallen in love with it.

There is a classic European old world charm to the city centre. The people are extremely friendly. The food is fresh and of the sort that titillates the senses. The four nights that we spent there were magical and left us hungry for more.

Which is probably why I got to head back again to Madrid recently. This time I went to attend the Madrid Fusion festival.

Madrid Fusion is an event that celebrates food and possibly reflects the central position that Spain enjoys today in the international food scene. There were stalls offering great produce from Spain and all over. There were many stalls offering the legendary Spanish jamon iberico and local cheeses. Then there was artisanal breads, Argentine beef, kobe beef from Japan, salmon from South America to try and a Korean stall where a Buddhist monk spoke to people about Korean vegetarian food. There were wine tastings happening across the floors. Equally heady were the demonstrations and talks held by legendary chefs ranging from Joan Roca (of El Cella Can Roca, no 1 in World’s 50 best restaurants) to Da Dong from Beijing who finds inspiration for food in Chinese art. The festival is a great place to be in for anyone interested in the art and craft of modern cuisine. While China, Philippines, Manila and Korea brought in an Asian flavour, it was sad not to see India represented here. Hopefully some day in the future.

One night the Madrid Fusion folks organized a tapas tour.

Our first stop was a place called La Maquina. The place had a nice warm vibe and was filled with people who looked liked they were having a good time..

We got ourselves a table and were served a selection of tapas with our drinks. There was deep fried tender chopped cuttlefish served with mayonnaise and garlic aoli. The ubiquitous tortilla (Spanish omelettes) served on bread.

Then came what was for me the highlight of the evening. Fried runny eggs served on deep fried tiny fish called cachelitas with fried green pepper on the side.

Our next stop was an interesting owner run place called Viavelez run by chef Paco.

He once ran a Michelin starred restaurant in Asturius in the North of Spain. He then moved to Madrid in hopes of tapping a larger audience than that in his village.

We had the mayonnaise based Ruso Ensalata or the Russian Salad that the Parsi caterers of Mumbai dish out too. Paco's version had shredded salmon in it.

Then there was a flavoursome green bean, chorizo and seafood soup which got an incredible flavour from the chorizo.

Finally there was 'tigre', Paco's creation which consisted of steamed mussel in what seemed like a basil dip, a deconstructed mussel shell made with a crisp wanton skin and squid ink placed on a warm, spicy, creamy, sea food infused base.

Our next stop,  Palatea was very different from Paco's little restaurant. Palatea is a large multi level restaurant with a large patio. It's lit brightly like a casino. Feels pretty glitzy. Here we had the fried ham croquettes, fried cod bacalow and empanada, the puff pastry dish pie like dish which has traveled from Spain to South America.

Fully stuffed we headed to our last stop. A restaurant called Cinco Jotas where we had the Spanish Iberico ham and tried our hands at slicing it.

On my last day in Madrid I went on a food walk organised by Madrid Food Tours. It was conducted by Debbie who has moved into Madrid from London. Her love for the city is infectious. On the walk we went to a number of new places and tried new dishes which I hadn’t tried before. We went to a monastery in the middle of the cities where nuns baked cookies and sold them from behind close door, invisible to the outside world. We had oxtail puff pastries at El Anciano Rey and then a broth made with choriz, ham hock, chicken and beans at Taverna La Bola. This broth was really wonderful as it had begun snowing. We then went to a neighbourhood shop run by a lady called Carmen. Here we had meatballs and fish empanadas which Debbie often picken up after a busy day in work. Another interesting stop took us to a crowded shop called La Campana where we had freshly fried calamari bocaddillos (sandwiches). We also got a demo with tasting on the various types of Spanish ham at Café Bar Ferpal.

I left Madrid with a prayer to come back again someday. It is, after all, truly a food lover’s ci