Mere biwi ka bahut meherbani hain mujhe yeh line pe lagaya. (I owe it to my wife for being in this line)
I have rarely come across someone as proud of his wife as Mr Ramchandra Kamble is of his wife Prabha.

Mr Kamble runs a little breakfast stall beside the Guru Nanak Hospital at Bandra E. I see him surrounded by office goers around 9 am on days when I pass him by.

I sometimes go down to have a mid morning snack with what's remaining in the stall at around 11 am. Mr Kamble serves Maharashtrian breakfast dishes such as pohe, upma, sheera and missal. He takes these out of aluminum containers and serves them on small paper plates.

Today I was in luck as there was fresh hot pohe (a dish made with rice flakes). I have had the upma earlier and that's pretty good too.

I asked him whether he cooks the food that he sells.

He broke into a toothy smile and told me that his wife does the cooking. He told me that she is an accomplished cook who once used to cook in people's house. Her repertoire runs from non-vegetarian food to onion garlic free Jain food he proudly told me.

He said that she had just cooked a fresh lot of pohe and that's why it was hot and fresh.

'There she goes', he pointed to a lady in a pink sari on the other side of the rood.

'She is off to the Taj Hotel in Colaba. She is part of a group of women sent there by a mahila mandal (women's organization). They make rotis and puran polis for the staff from noon to six in the evening. The group makes about 2,500 rotis a day!' Mr Kamble told me, his chest visibly bursting with pride.

I finished my excellent pohe (Rs 20) topped with a coconut chutney and then sipped on a chhas (Rs 8). The chhaas (butter milk) is made with curd, water, coriander leaves, two types of salt and crushed coriander seeds. Unlike the South Indian version, the Maharashtrian  chhaas doesn't have tempered curry leaves and mustard seeds in it. Some people add mint leaves said Mr Kamble but he doesn't.

The 58 year old Mr Kamble told me that he used to work as a salesman in a clothes shop in Bandra W. About four years back he decided that he couldn't keep up with that job which required him to be on his feet for twelve hours a day.

That's when his wife and son suggested that they set up this stall, named after his village Goddess Tuljabhawani. Mr Kamble is a Mumbaikar but his ancestors hailed from Sholapur in Maharashtra.
He opens his shop at 8.30 am, is sold out by 12.30 but sticks on till 2 pm to sell chhas.
Every morning his wife, the 52 year old Prabha Kamble, cooks the food for the stall before leaving for her job.

Thanks to that I manage a nice mid morning snack these days. 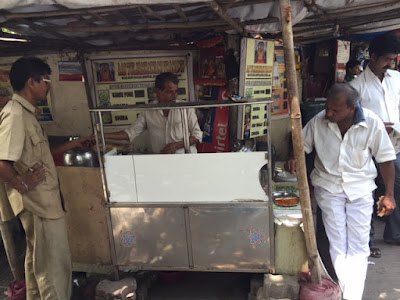 I went down for my morning pohe and the stall owner, Mr Kamble insisted on treating me to a cup of chai. He then shyly smiled, took out a couple of sheets and gave them to me. Apparently the Mahila Mandal folks for whom his wife works at the Taj, saw my blog post on the couple. They translated it into Marathi, he told me, and shared it with all the women there to encourage them. He seems most kicked. So am I.

And the tea was lovely. 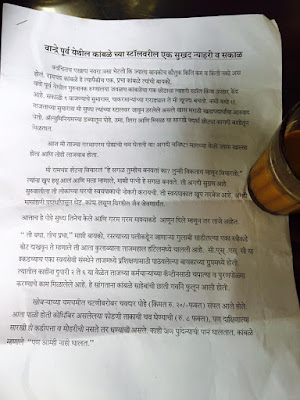 Anjali Koli said…
The pohe, upma and chaas all look good at the Kamble's stall. Reading about Prabha working at Taj making chapatis for the staff and the pride her husband has in her cooking skills is so inspiring to read. I must share the story of Chef Lalit my relative. He trained at Taj, it was those days when Tata's picked local boys and employed them in the kitchen and housekeeping , I think they still employ needy HSC pass boys from low income groups. After traveling around the world as a Chef today Lalit has settled in Adelaide and owns 2 restaurants there. Another of his friend from his days at Taj owns curry outlets in Cairns, AUS. Definitely the "Taj" touch, to take pride in what you are good at. Tata's do so much. I haven't seen better employers than them. Seems even the subcontract staff are happy there.
4 June 2015 at 21:20

Preeti said…
The Kambles' are one determined couple I must say. Very kind of you to write a post on such hard working individuals. I enjoyed reading your post Kalyan. I hope Taj group continues their support and help individuals like the Kambles'. I know a Delhi style chaat wala in Hounslow, who has set his stall in an Asian grocery store who could do with such a support. We visit this particular stall every time we do our grocery shopping. These people serve you with such humble attitude..have a post on them written long back.
5 June 2015 at 13:13

Kalyan Karmakar said…
so glad you liked it. this is the sort of post I love writing the most so glad it struck a chord Preeti
7 June 2015 at 21:51

Kalyan Karmakar said…
That's a wonderful story. Had no idea. Thanks for sharing Anjali
7 June 2015 at 21:51