We have come to Goa for a mini break and I woke up too early for a holiday today.

I opened the window of our room and was held in a spell as I heard the sound of the sea which is just outside.

I love the sea and can't get enough of it.

We are at the Marriott Goa. Gave our usual Baga a miss this time and decided to check into a resort as it is the monsoons now and everything is going to be shut.

We have a room which is just on the bay and you can hear the sea from our room even when the windows are shut!

This took me back to when I was a kid and I had gone to Puri with my parents and we could hear the sea from the terrace of our guest house. Our last holiday together as a family before my father passed away.

We checked in to the Marriott yesterday.

I was pleasantly surprised by the fresh flavours of some of the dishes we tried in the coffee shop brunch at the Waterfront, Marriott yesterday. Particularly good were the  tangy glass noodles and the cajun spiced chicken which had a strong peppery hit. Calamari and prawns grilled on the live counter with Goan cafreal spices were bewitching. The Goan chicken Xacuti was robustly flavoured. The Keralite chicken ishtew with appam were hearty.

In the evening I had a cappuccino at Azur, the lounge at the Mariott, which was really solid and reminded me of cappucinos of the cafes of Melbourne. One of the best I have had in a while!

I don't expect much from food in resorts so K and I we were both quite impressed by what we have had so far.

At night, we headed to Bhatti Village, a 4 year old restaurant as recommended by our friend Sue this time and others on a previous trip. The hotel cab (Rs 1,500) cost more than the meal (Rs 1,000). It's in a place called Bhatti Wado. A nondescript restaurant where the owner Patrick serves dishes made with recipes given by his wife Merciana.

Our cab driver found the place a bit hard to find but he asked a few local Goan boys and one kindly escorted us on his bike and showed us where to go. There is nothing else beside this little house where the restaurant is located.

The restaurant is in the ground floor of their house which has a 1705 born distilling machine as part of the decor and also feni barrels as testimony to the bhatti (distillery) that was next door. The crowd was a mix of regulars and tourist.

There is no menu card. Patrick takes the orders and tells you what's there on a given day. You can ask him for the prices.

For our mains we had roast pork where the pork was a bit chewy but the fat with the pork and intense, spicy, slightly sweet sauce made up for it. Patrick didn't tell us what went into the sauce though he was happy to chat with us. He told us that he doesn't have a prominent signboard as he doesn't want too many customers and wants the rush to be manageable. He said that the Portuguese and Goan dishes served here are from his family that you will not get in restaurants. Till people started writing about in newspapers and in the internet (ouch) that is. Apparently he has imitators now.

The dish of the day, was the prawn guizad. A Portuguese dish where the light sauce had the flavours of the prawn streaming through it. Patrick explained that this was because they had kept the heads of the prawns attached. Marco would have approved. I chewed on the heads like a good Bengali.

We did miss our pork chilli fry and Old Monk with Coke in Infantaria in the rains though.

Yesterday, my article came out in the Mumbai Mirror. I had tried to chronicle the journeys taken by my fellow food bloggers and show to the world the immense possibilities out there if one works hard, is passionate about what one does and dreams big. This article took off from the Adda With Kalyan chat on IFN earlier this week. The Mumbai Mirror editors, Kunal and Srivatsa, were a couple of the politest people I have worked with. Here's the link. 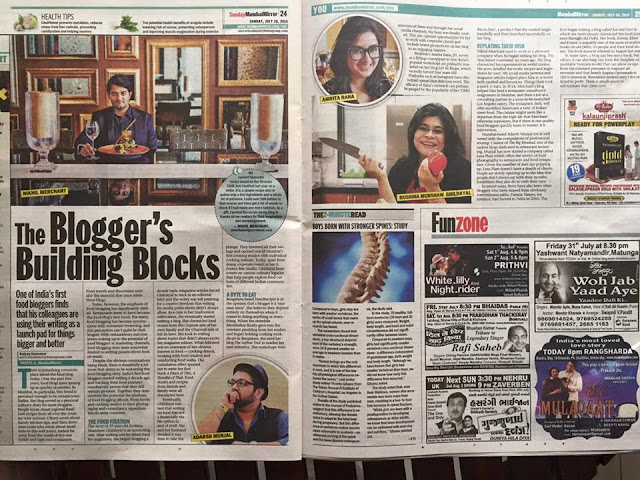 I am attempting a shoot at the Marriott today with a local camera crew so wish me luck and listen to the ocean for now.

PS: It's been a while since I did a diary post while travelling. Must be the sound of the sea and the great wifi at the hotel.
beef Faraway foods faraway places Goa iPhone pics pisces pork prawns travels

IshitaUnblogged said…
We were in Goa last year exactly at this time... I can almost feel the rain and hear the sound of the sea. Bhatti Village... these are kinds of places that inspire me to write. Putting it down for my next visit. All the best for your shoot - you are a natural anyway:)
27 July 2015 at 14:07

suvro said…
No pictures of the "1705 born distilling machine"? I would have thought that when you found that distinctive, you would have taken a picture to go with the story you were going to tell?
31 July 2015 at 01:34

Tarjani said…
I have some awesome memories going to Bhatti's Village, Three girls driving the usual Goan bike lost finding this awesome Bar and kitchen, and it was 11 at night we called Patrick and explained the situation we were in he was kind enough to keep is kitchen open and served us the most sumptuous meal. Thank you Patrick :)
27 January 2016 at 13:05