Luchi and alur dom is the classic Bengali breakfast combination.

Not that I have grown up on it as my mother doesn't make luchis! My grandmother does though and I love the luchi and chholar daal that she makes. They are the first Indian dishes that I agree to eat as a pampered bilet ferot (NRI) kid.

I can't make luchi. Have never tried it. I sometimes get our cook Banu to make them and we refer to them as 'maida puris'. An occasional indulgence as deep fried refined flour bread is not what the middle aged constitution is built for. The other option is the Bandra Durga Pujo stalls. Bong Bong has luchis in Bandra but they don't open for breakfast.

I did search Bandra for puri bhaji breakfasts in my early years here but never found it. Then Sweet Bengal, the Bengali sweet shop came in. They stock radha bollobi (a lentil based masala stuffed thicker version of the luchi) and alur torkari. I would occasionally buy it from here and heat it in the micro and have it for breakfast at home. Not the same as having them fried fresh. But then, to be fair to Sweet Bengal, even sweet shops in Calcutta like Ganguram keep pre-cooked radha ballabi and reheat and give them. To get freshly fried stuff you have to go to roadside stalls such as Maharani in Kolkata. You can read more about those places in Kolkata in this link.

Which is why I got excited when I saw a few tweets from folks such as Shiladitya about the radha bollobi in the newly launched breakfast menu at Doolally.

Doolally is a fairly new taproom in Bandra. It is located in the Candies lane at Bandra Reclamation. I think their base is somewhere near Pune where they have a micro-brewery (as Sahilk points out on twitter). It's pretty popular in twitter and you keep seeing mentions of it there.

We went to try out the newly launched breakfast menu this morning.  For me it was the call of the radha bollobis that did it. K kindly agreed to support me with her company.

We reached there at 11.15 am and were told breakfast ends at 11 am. But I had called earlier in the morning and the person on the phone said 7 to 12. On request they agreed to make us breakfast specially after I told them about the phone call. You need to speak to the manager though as most of the wait staff at Doolally don't seem to be very articulate or proactive.

There were two or three items on the menu and K went for the fried eggs while I went for the radha bollobi. I took a double take when I saw that price was 500 Rs. Then I saw that the price included a beer and without the beer we got it at 350 Rs a dish. They point out that there is no service charge.

Our dishes were not brought together though which is bugging and I had to wait for the radha bollobi.

The place was completely empty as can (hopefully) be expected in a pub in the morning. This made it a bit depressing though and it got really cold as the aircon was meant for more people. Not the happiest of places to sit in. Thankfully, K indulged me by not walking out though she was upset that she was not spending her weekend in a warmer place and I don't blame her. I hate empty places too. The lure of radha bollobi kept me seated even though I was freezing there.

However, the radha bollobi, when it arrived, was worth the wait. It was piping hot. Had a nice crunch to it. It had a green pea filling and not a lentil one. Technically, I think, this makes it a koraishootir (green peas') kochuri and not radha bollobi! Tasted pretty good though.

It was served with a delicious, ghee hued chholar daal and a subtly flavoured, alur dom (potato curry) which was intricately spiced but not spicy or masala heavy or heaty. The potatoes in it were soft and boiled just right.

Frankly it was too much for me to finish. I think two people can share it in which case the price of Rs 350 is not so bad. You are definitely not paying for the non-existent vibe, sleepy service and dull ambience after all.

We had a discussion on the price on Facebook.

My take is that we are willing to pay for international dishes but not for local ones but this is the only way to encourage restaurateurs to do so. Would Maharani be cheaper? Would making it at home be cheaper? Well, yes to both but neither is an option for me.

So I think it is a very good option for those who crave for a luchi/ kochuri breakfast and don't make it at home. You then have to decide how much you are willing to spend for breakfast. In any case, this would be a once in a blue moon indulgence for me. The place was too dreary and the dish too heavy for me. 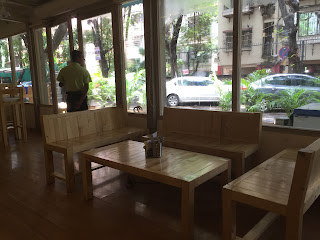 Bengalis on my timeline were bemused at the sight of a hip Bandra pub offering a classic Bengali breakfast dish when I posted about it on Facebook.

FB: Rahul Ghosh Koraishootir kochuri in a Bandra pub! Is this the second Bengali Renaissance?

From what I gather, they have a Bengali chef at Doolally. In fact they have a few other Indian bar snacks too like a Goan sausage one and I think I spotted a Keralite chicken on the menu.

They don't serve tea or coffee. Just beer. So if you want a coffee for your breakfast, pick up the double shot cappuccino next door at Candies. We stopped at Saltwater for some Columbian Supremo and a decaf on the way out and luckily they gave us a table though it was lunch hour.

I could do with a Gelusil, the digestive which Bengalis chase their luchis and kochuris with. Left me with quite a heavy feeling but then kochuris are not a dish for the chicken hearted.

I know its funny to write about a microbrewery and not mention the beer. It's just that I don't drink much these days and when I do, I prefer to stick to Jameson.

If I go by the tweets I see, it's beers are pretty popular. If you have tried them out let me know how you found them.