Meat lovers in Mumbai can rejoice once again because the bara handi story is not over yet.

A pall of gloom had set in when Vallibhai Bara Handi at Mumbai’s Bohri Mohalla had shut down recently (you can read my post on this here). Then there were rumours that Surti Bara Handi had shut down too. Some said it had moved to Jogeshwari. There was a lot of confusion.

Well I went to Bohri Mohalla a couple of days back for a project and had the time of my life. Another exciting beginning in what has been a year of fresh starts. More on that in a few days.

I was at Noor Sweets munching on the freshly fried jalebis that Kurush had recommended to me. The perfect balance of sweet and crunch.

Which is when I met Rahul and Mehul, two friends who had come here to eat. We got talking and traded names of our favourite places to eat in at Bohri Mohalla. We were excited to see our similarity in tastes. Then I happened to mention that it is sad that the bara handi phenomenon was over.

“But it’s not”, piped up Rahul and Mehul. You will get bara handi if you walk down the lane. Look for the blue tarpaulin. They have set up shop there, Vallibhai is there.”.

I hastily said bye to my new friends on hearing this and cantered towards the blue tarpaulin, crew in tow.

Sure enough. There was a bara handi place. Surti Bara Handi though and not Vallibhai as Mehul and Rahul thought.

I met Mr Nayeem who was beaming in front of the shop. He is the third generation owner of the 80 year old Surti Bara Handi. We shook hands warmly. We had shot together when I anchored the segment on Mumbai’s street food for the Travel Channel USA. (You can see the video in the link here).

Nayeem, told me that they had been shifted Surti to the new premise, a few lanes away from the old shop, because of the Burhani Trust redevelopment. That most people didn’t know about this. So he usually stood by the old shop and sent people here. And no, they haven’t shut down, he pointed out emphatically and asked me to help him dispel the rumours.

The new place has a few tables indoors and then a couple of benches outside. Very Spartan and non-air conditioned of course like every place in Bohri Mohalla. You came here for food and not fluff.

However, the new Surti outlet looks brighter and more livelier than the earlier place. Probably the buzz had increased with Vallibhai shutting down.

Nayeem introduced me to his two uncles. One was sitting at the counter and another at the bara handi platform. He also introduced me to a young gentleman whom he said is the new generation. The uncles are the one who had kept the traditions of his forefathers alive said Nayeem.

His uncle explained to me that bara handi had originated in Surat (hence the name Surti) and Ahmedabad in Gujarat.

The Vallibhai folks had earlier told me that bara handi had come to Gujarat from Iran. However, Nayeem's uncle denied this and said that the rotis had come from Iran but bara handi is from Gujarat.

This confusion is typical of discussions on India’s largely undocumented culinary legacy.

Nayeem's uncle (he is soft spoken and I didn’t catch his name) told me that this shop in Mumbai was started more than 80 years back. A decade or so before Vallibhai was started. He told me that the bara handi places in Surat and Ahmedabad in Gujarat are run by their relatives.

Nayeem explained that cooking in bara handi or twelve vessels is how the process had started but now they use nine vessels for cooking. “The name bara handi has stuck on” explained Nayeem.

I remember that Vallibhai had nine vessels outside too though they would say they had three vessels inside.

A mix of meat cuts, wheat and daals are slow cooked over eight hours in these nine vessels and these are mixed together with an expert’s touch and served to customers. The meats used are a mix of buff meat (water buffalo) and mutton (goat).

“This is how food was originally cooked in India” said Nayeem (he speaks English by the way while his uncles are happy to chat in Hindi). “Cooking used to take time then, food was cooked with care and patience”.

Nayeem said that the beef ban had affected him. “Business has not gone down but the quality has been affected”.

He said that while earlier one could get bull meat too even if not cow, now it is only buffalo and that buffalo meat is too fatty which impairs the final taste in his opinion.

Surti offers serves the pichhota or the tail of a buffalo, slow cooked to tender submission. Then there is nihari with tender meat and a very intense sauce, redolent with silken marrow (nalli) taken out of the bone and added in to the sauce (you pay extra for this) and mopped up with Iran originated huge, khameri roti breads. The nihari comes in bade (buffalo/ beef) and chhote (goat) versions.

They serve ‘bhel’ too.  No connection with the vegetarian street food dish, bhel puri that Mumbai loves!

The bhel at Surti has a mix of nihari from bade and chhote, paya (trotters), marrow, a mélange of sauces and is a very complex and sophisticated dish.

The bara handi tradition of slow cooking is a meat lover’s delight. It is probably one of the most evolved forms of meat cooking to be found in Mumbai and should be a part of the city’s culinary legacy. It can match the best that the world of food has to offer to meat lovers.

Ironically, or aptly some will say, it is served in the most humblest of surroundings.  It had started as poor man’s food after all as Kurush Dalal had once explained to me. It used discarded cuts of meat and through the magic of slow cooking had transformed these into unsung gourmet delights.

This is food which is all about taste and pleasure of one’s every sense. Shorn of any pretence.

Bohri Mohalla locals get the dishes at Surti packed and take them in plastic bags to eat at home.

The rest of us sit at the benches laid there paying our respects at the altar of meat.

So please do your bit and go to Bohri Mohalla and eat at Surti’s if you love your meat and help preserve this great culinary legacy. 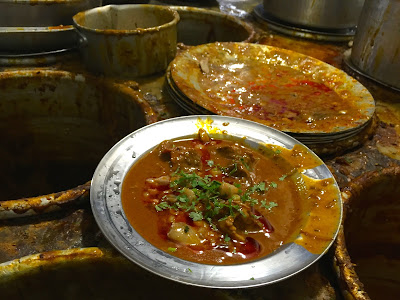 Rohan Bhatt - Foodie By Heart said…
Surat boasts of a Rich Bara Handi Culture as you have mentioned. There are other products in Surat's Mulsim Culinary Heritage. I would suggest you guys to come over here once and experience for yourself. The Rander Area in Surat has been inhabited by Muslim Traders for centuries and their primary work was to go to places like Burma (Now Myanmar), Indonesia and Malaysia to trade for various products. They brought back certain customs, traditions and recipes which have now become a part of their culture and traditions.

Kalyan Karmakar said…
Thanks Rohan. My wife's mom's side of the family are from Surat and I would love to explore the food there one day. Thanks for the back story
22 February 2016 at 12:48

Row Saheb said…
Kalyan, is this place still open? I'm visiting from Zurich in November and hope to taste this delicacy?
25 August 2016 at 04:46

Kalyan Karmakar said…
@Row Saheb...haven't heard anything about its shutting down but I haven't been there recently
25 August 2016 at 23:44