It is said that the strength of a brand is best measured by the recommendations it gets from its users.

Well, we have been telling all our friends in Bandra these days to visit the Taj Mahal Tea House near Bungalow 9 at Bandra Reclamation.

I love the place the most for its ambience.

With its wooden furniture, classic tiles, light blue and cream theme, Zakir Hussain signed tablas, with its sense of space (3500 sq feet says the internet) and art all around and the classical Indian music background score, The Taj Mahal Tea House reminds me of houses I've visited in Alipore and Garden Reach (Railway officer's houses) in Kolkata, in Colaba in Mumbai and in South Ex and GK in Delhi.

These houses exude grace, class and old money. They are aspirational yet warm and not intimidating. They speak of the promise of the good life.

It's ironical that I have used two market research concepts, Net Promoter Score (recommendation) and brand world (imgaery), while discussing the Taj Tea House so far.

The Taj Mahal Tea House has got nothing to do with the Taj Group of hotels.

The Tea house is run by Unilever, who along with ITC, are the two clients credited with helping build the market research industry in India.

Though I wonder if market research was used to temper someone's dream, passion and vision in the case of the Tea House.

We were invited to the Taj Mahal Tea House well before it opened and have made quite a few lunch, tea and breakfast trips there as customers since then.

You feel as if you are transported to a magical world far away from muggy busy Mumbai when you step in here and that's what we love the most about the Taj Mahal Tea House.

I have seen a few negative reviews on the food on the net about the Taj Tea House but we have largely had good experiences here.

I love the breakfast options the most.

We love the waffle which is near perfect. Has a lovely crunch, isn't chewy. Nor is it eggy compared to the ones at Indigo Deli. Here they give one waffle per plate, but can be cut easily if you want to share.

My Parsi wife approves of the akoori here and I like it too. I liked it enough to order it twice in two successive visits. It is served on a dense besan (gramflour) bread. I miss  chopped chillies in it though. Thanks to my in laws, an akoori has to have chopped chillies in my head. My late father in law loved chillies.

They bake their breads in house and make a lovely brun (crusty Irani bread) which they served buttered and with a tangy mango jam which is made in house too and is pretty delightful. No, not the Kissan jam that we have grown up on!

They do serve a lovely Parsi mint based milk tea here. The kadi patta tea is an interesting innovation and they have a Goan masala tea too which I have not tried. These teas are made with Taj Mahal tea.

They add sugar in advance in the milk teas here so you better tell them not to add it if you don't want sugar.

They also have a nice range of Darjeeling teas and teas from Ceylon and the super expensive white tea (from China I think).

K loves the paneer cocktail samosas here and has tried the high tea too (micro mini macarons, cupcakes and sandwiches I am told).

I tried the ragi dhokla the other day which is like a ragi bread sandwich with micro greens in between. The texture was lovely and the South Indian flavours are heady. Looks pretty quaint too.

I would avoid the bread upma though. It is made with croutons that are alternatively dry and deep fried, too full of tomatoes, not worth abusing the body with.

The menu, I am told has been designed by the French chef Gregory of La Poisson Rouge of Baga.

He has apparently tried to infuse elements of tea in some of the dishes. Not sure if it works.

I tried the black pomfret during the preview. The pomfret which was juicy and succulent though the promised lemongrass notes were not discernible. It was one of the nicest European themed fish dishes that I had tried in a long time.

The flavour of oolong tea was not perceptible in the kingfish dish, which I tried in a later visit, despite what the menu promised. It was a bit over cooked and dry and I would avoid it till they fix it.

The rice in the Darjeeling tea infused risotto was over cooked and again no clear signs of the tea.

Perhaps they are trying too hard with the tea motif in the food.

The good thing is that they don't have much storage space at the Taj Mahal Tea House so get their fish fresh everyday.

They consciously don't have much of a coffee range but they serve the same filter kapi that they serve in their Bru Cafes. It is good for breakfast if you need coffee to start your day like I do.

They have a section where they sell loose teas and have tried to replicate the feel of old tea shops of India. 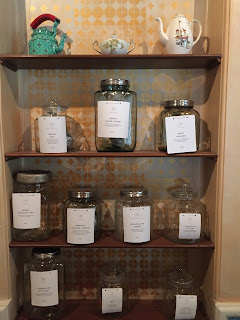 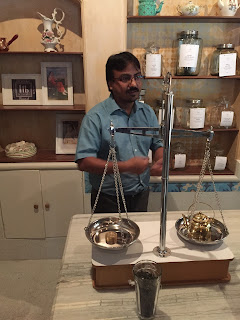 We have not tried the desserts here. We normally avoid desserts when we can.

Would we go back again?

Actually we have gone back quite a few times and plan to do so again.

This is the link to a post I did on tea houses in Mumbai for EazyDiner.

I have seen restaurant reviews in some sites these days mention that they are done anonymously and that the food is paid for by the sites.

I have always stated it in the post when the meal is hosted by the restaurant, or if a post is done in association with a brand.

If not mentioned, then you can assume that we had paid for the food/ product.

I avoid hosted events these days as I feel that they don't give an idea of how a restaurant is in normal times. Even if I do attend them, I make it clear that the experience is not indicative of their regular service if I write about it.

I rarely read 'reviews' which are based on hosted meals. If I ever write about a hosted meal then you too should read it as a narrative of an experience and not as a 'review'.

They say you should not review places which are very new. They say one must allow for teething troubles. But at the same time people want to know the verdict on a new place before going there. And by that logic restaurants shouldn't host blogger events and media events, just after they have opened, for promoting themselves. And should offer lower prices till they get their act right.

I had been called by the Taj Tea House for a private tasting before they opened. This was a genuine feedback session as they requested me not to talk about the place till they were open.

Others who invite bloggers then breathe down the necks of these bloggers looking for posts. I stay away from these events to avoid the obligation.

Anyway, I never saw myself as a restaurant reviewer. I don't go three times to a restaurant before writing about them as they say good reviewers should. Except this time!  I don't go about trying out all the dishes in a restaurant like they do in a review. Too much food confuses me. Instead, I like to write about what excited me in a place the way I would if I was telling a friend to go to a place to try out a dish. Or, to avoid it!

So Finely Chopped is not the place to come to if you want reviews on newly opened restaurants across the city.

The Taj Tea House visits were paid for by us but were not anonymous as we have gone there quite a few times by now and are known faces there by now. Plus my wife works on the Taj Tea account. That's why we went there the first time!

This is the film she and her team have done recently for Taj Mahal Tea.