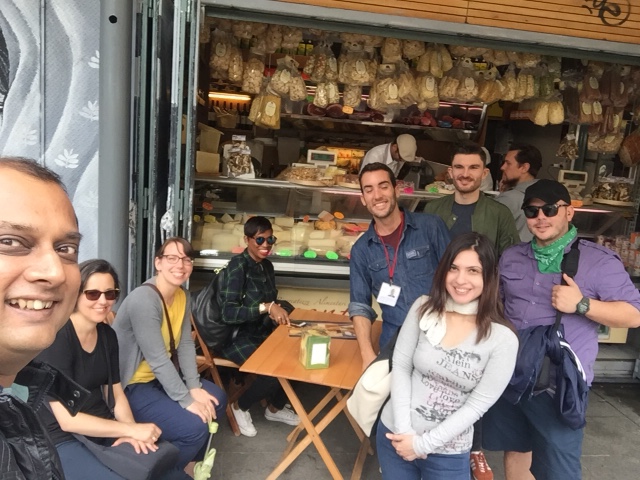 I wrote a whole post on the Blogger app on my iPad last night, forgot to save it and it got deleted when I switched to explorer to check a link! This on a day when I was wondering whether I should even bother writing blog posts or just post on Instagram.
This morning I looked out of our hotel room window in Florence, saw the duomo, and said I must write. So here I am again.
We left Rome for Florence yesterday. Florence, or Firenze, is as beautiful as everyone said it will be and I am not just talking about the brilliant steak florentine we had last night at 13 Gobbi. Florence
We left Rome with the realisation that it is a huge city with no 'one centre' which makes it difficult for tourists to decide on where to stay. Our hotel, the warm and lovely Fabio Massimo Design, is in the Prati district which is very near to the Vatican. This makes it a bit far from the historic centre which has the Pantheon and the Colloseum. You can take the metro and walk to reach there or a bus. Romans well tell you to walk everywhere though.
Then there is the Trastevere district which many people told me to go to because of the food.
That's where we headed to on our last day in Rome for a food walk conducted by Eating Italy.
I had attended their food walk in Prague which was wonderful. Here's the link to my post on that walk http://www.finelychopped.net/2014/07/a-food-walk-in-prague-with-eating-prague.html
Reaching Trastevere from Lepanto, where we were, was a pain as the metro doesn't go there. It took me a while to figure out the bus stop's name, Sanzio and not Trastevere. Which is why we got late.
However, the Eating Italy set up is very efficient. Someone called me to check where we were and said the walk would start and we could join at the second stop and then I got a Sms giving details on where to go. Thanks to google maps we did catch them at the second stop.
I am so glad that we went there as Trastevere as this enchanted neighbourhood is far removed from the hustle and bustle of Rome. K said that the mood here reminded her of Bandra in Mumbai where we live.
The walk that we attended was conducted by Francesco who has been conducting walks for Eating Italy for a year. He was thorough, articulate, warm, witty, focused, kept us engaged over the walk which lasted for more than 3 hours and answered all my questions on the food to my satisfaction. 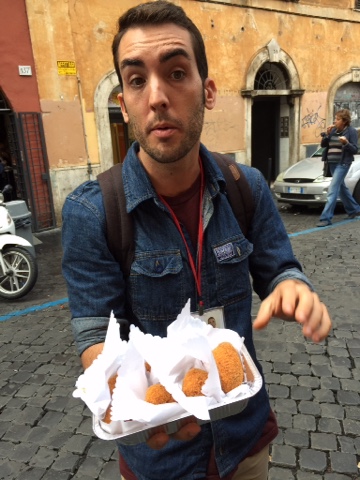 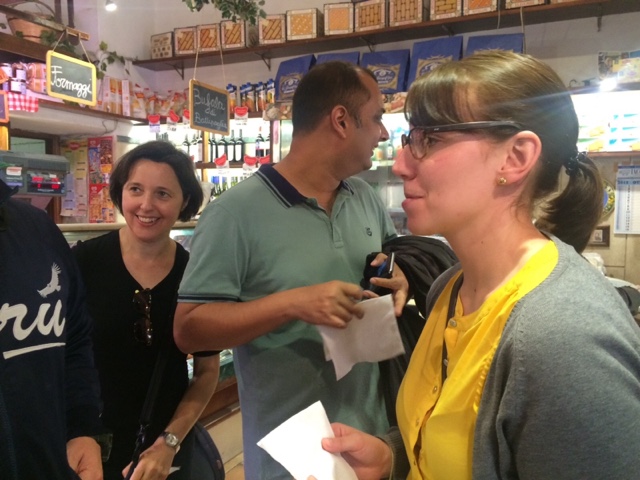 From Francesco I learnt that suppli, the Roman version of the Sicilian Arrancini, was originally invented as a way to use leftover rice. That what is used in carbonara is not any bacon but the cheek of a pig. That 30 g a day of pecorino sheep cheese, used in cacio pepe, was given to Roman soldiers for proteins.
Stories from two dishes that I had eaten in my first two days in Rome. 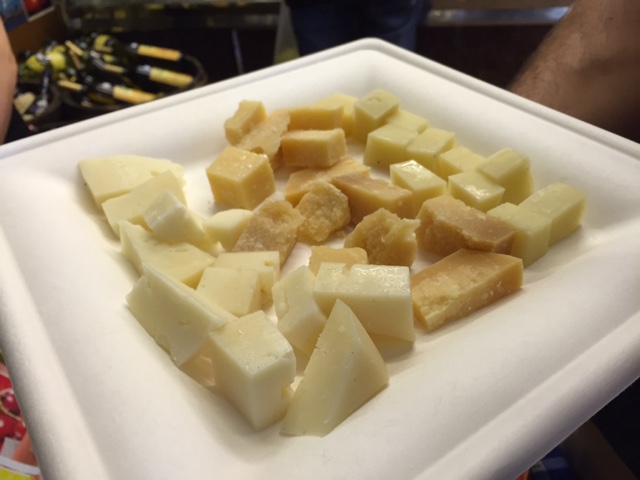 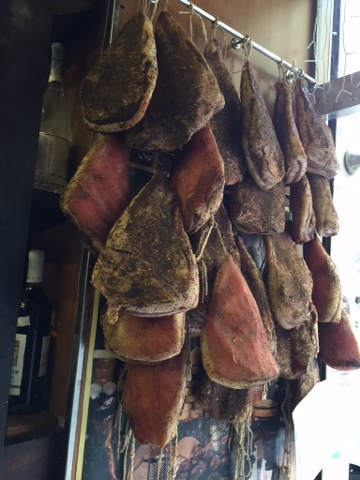 Pork cheek
We learnt that prosciutto and melon makes for a lovely sweet and salty combination. That all cured meat are called salume and all biscuits are called biscotti here. That you can drink from the taps on the road which discharge spring water. They are funded by taxes which 'Rich people don't pay'.
We also learnt that the frothier a gelato looks, the more likely it is to be fake.
Francesco took a bit of the romance away as he brought in a touch of realism and said that modern Romans don't make fresh pasta from scratch at home. They buy it in the shop and cook it. And they buy it at super markets and not in fast disappearing quaint neighbourhood stores. 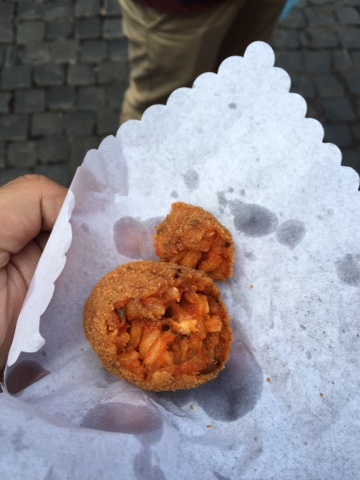 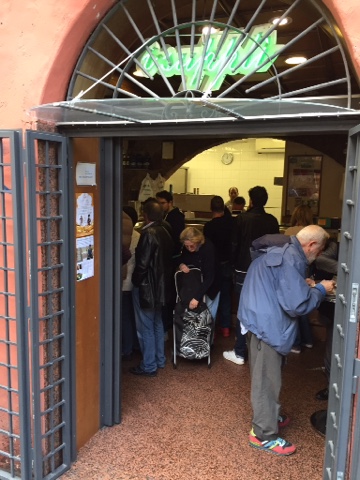 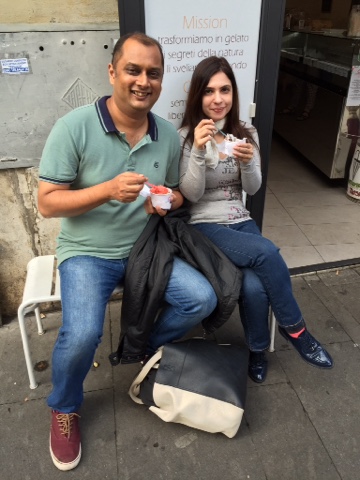 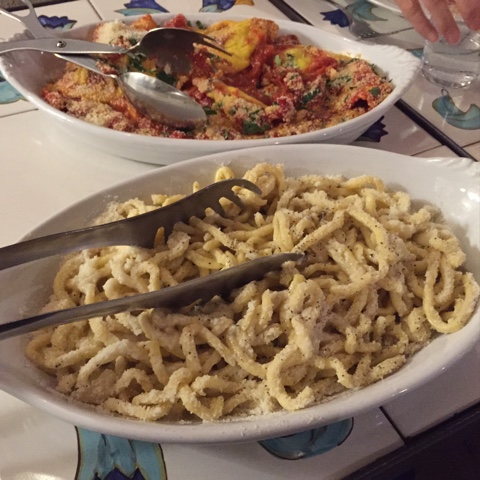 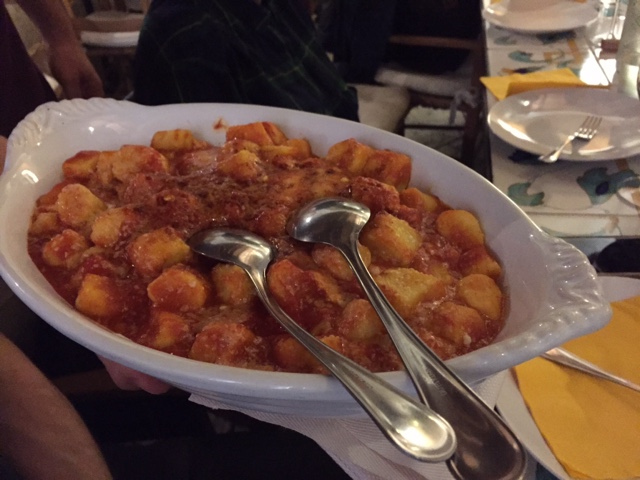 Gnocchi
Rome, they say is about history and the Trastevere walk was all about food history.
There was a 76 year old Nonna offering us cream oozing choux pastry buns at the start. 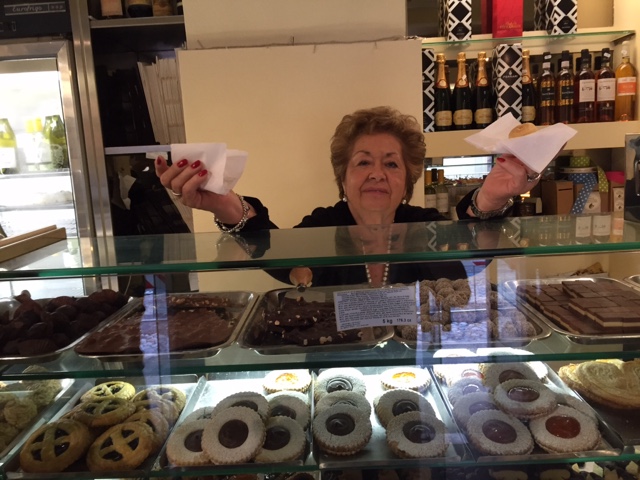 Cheese tasting in a magical cheese and meat shop which the owner's anscestors had started in 1900 followed. The owner, Roberto, served us and apparently a big Italian movie star walked in for cheese while we were there. 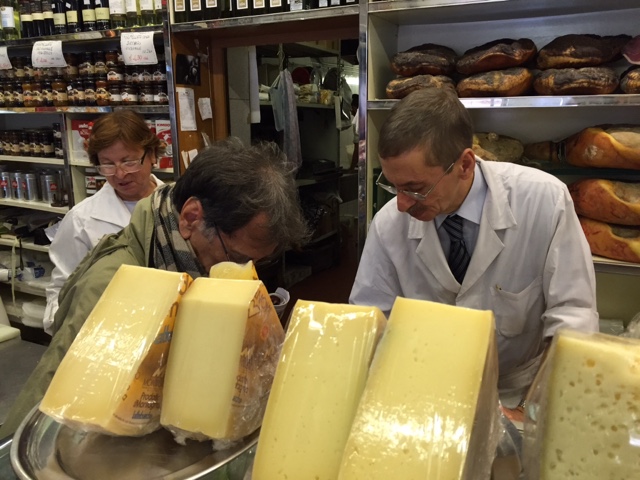 Roberto in white with a regular customer (not the actor)
We went to a meat shop dating to 1924 with a 92 year old lady sitting at the counter. Nothing is rushed here and we saw the charm of slow food in the porchetta served  after being roasted for 6 hours with pepper and spices with an exquisite bite of pork crackling with some pizza bianca (crusty bread slice). 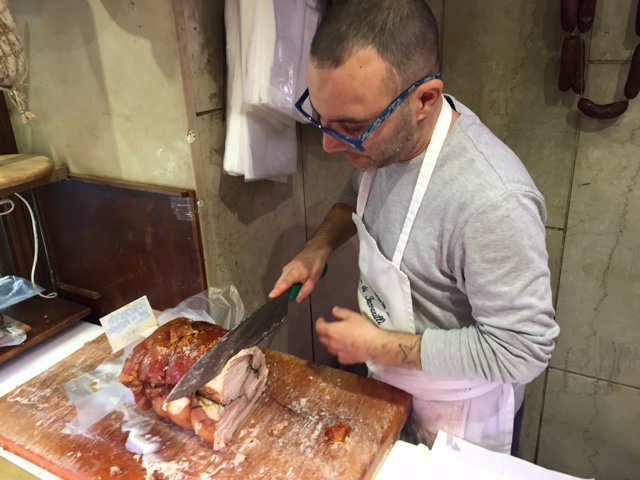 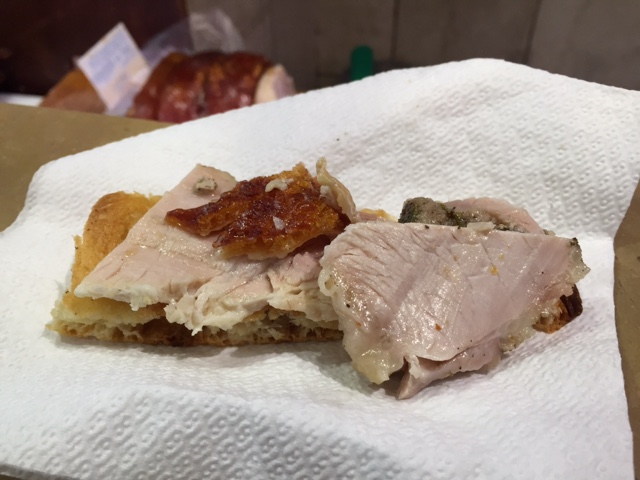 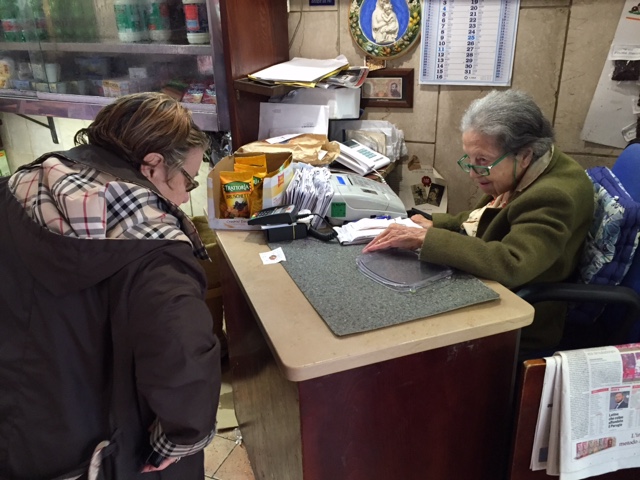 She's 92
We tasted gelato and got tips on where to go for gelato in the city. 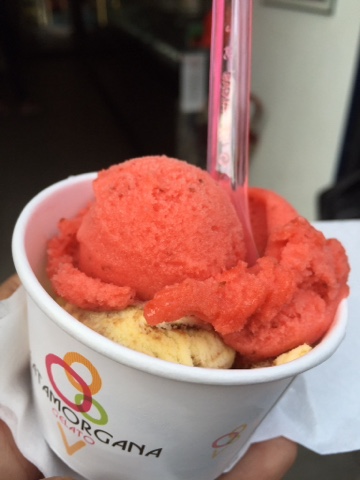 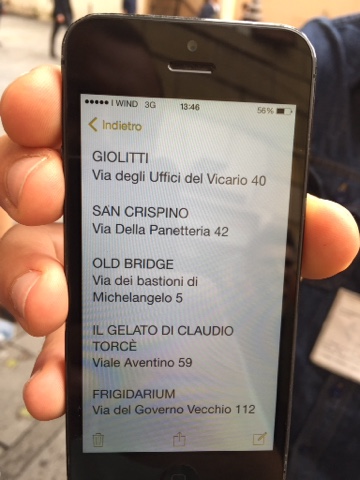 We went to one of the old remaining markets with just a few stalls left. Anachronistic in the modern world of super markets. Tasted prosciutto in a shop run by a son who doted on his mother, who was there too, and who served us in between hugs and kisses to each other. 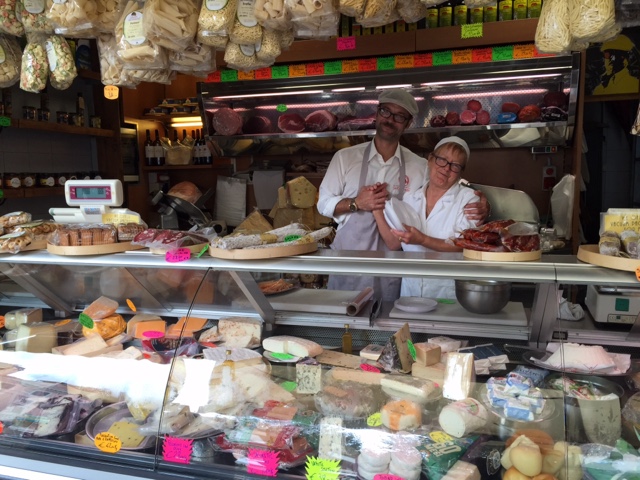 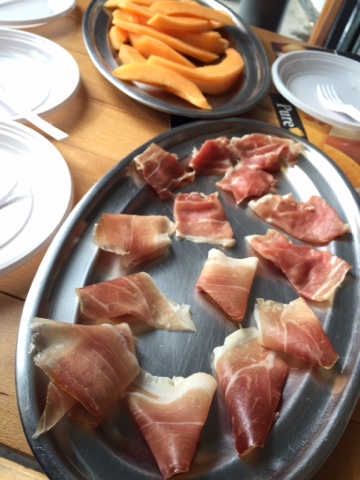 A restaurant, shut for lunch, was opened for us to try a variety of delicious hand made pasta - gnocchi and ravioli - tender and in tomato sauce and my favourite of - spaghetti al dente wrapped in pecorino and pepper - cacio  pepe. 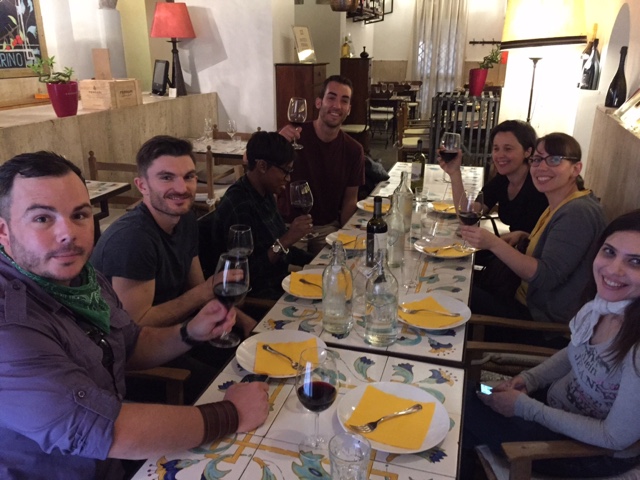 We went to a bakery started in 1920 and had some amazing lemon cream cookies and macroons served by the great and great great granddaughters of the founders. The aromas here were of a granny's hug. 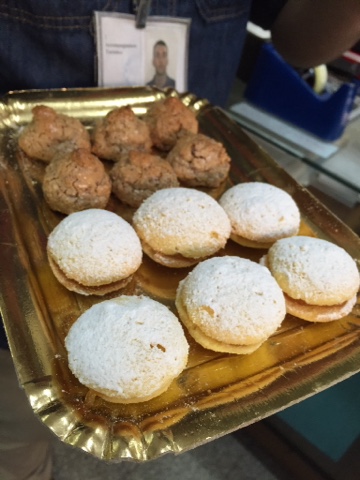 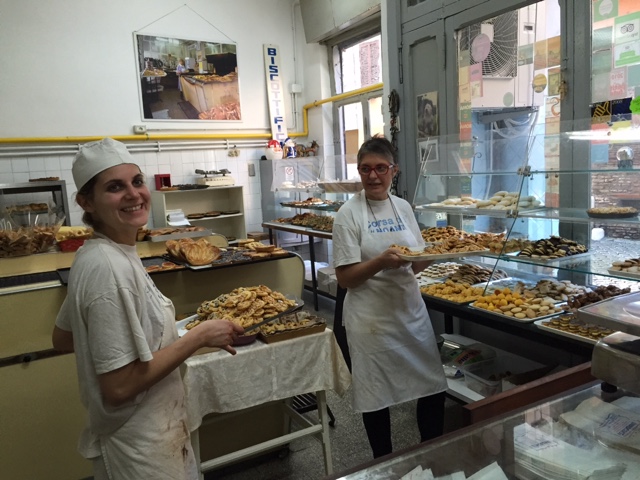 And then the most intensely flavoured creme brûlée which we had on top of a wine cellar built on a room which dated to 80 BC making it older than the Pantheon. 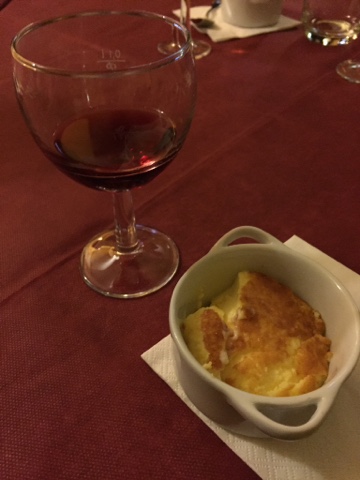 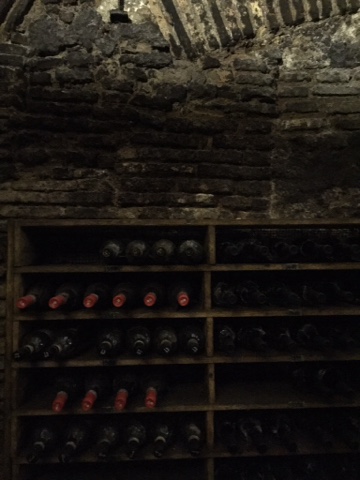 This dated to 80 BC
Good food, history, family bonhomie ... moods that sum up Rome for food lovers came alive in this food walk. It is especially recommended for you if good cheese and meat and stories around the  excites you more than anything else. 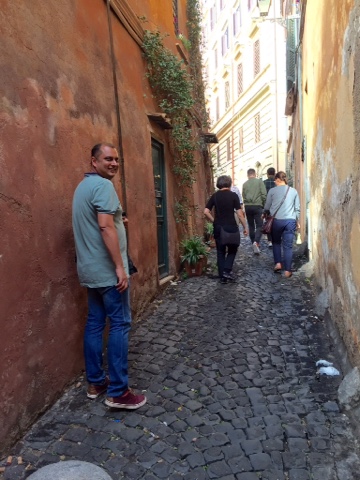 Sheikha said…
Ciao,
I want to know the name of the bakery where you had those yummy looking lemon cream biscuits and macarons!
23 October 2015 at 22:25

I did the tour with the same company in Prague! It was SO good!
http://www.jetsetgluttonette.com/featured/eating-prague-food-tour/