Why you should look for quieter lanes when eating in Rome. Grom, da Cesare 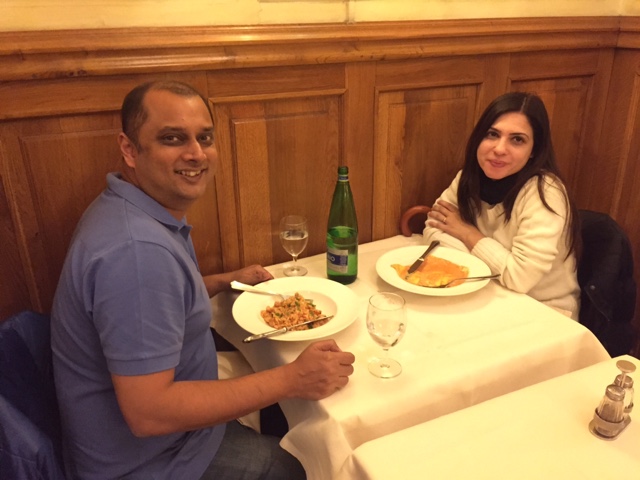 Similing through our dinner at Cesare
The day started with our first experience of taking a bus in Rome.
The frequency of buses is not the same as that of the trains. Ticket price is the same, 1.5 euro. Getting a ticket on a Sunday is tough as newspaper and tobacco shops, which sell tickets, are mostly shut. We went to the Metro once to buy a ticket. The other time we were told you could buy it in the bus. However, the bus we got into didn't have a ticket machine and we jumped off at the next stop,sheepishly to buy a ticket. That led to something good though as you will find out soon.
The other problem in a bus is getting to know which bus stop you are at as there is no display. So you have to look at the board outside to figure where your bus has stopped. Or ask a co-passenger like I did.
We did manage a couple of rides yesterday so it's not so daunting.
We went to see the Pantheon in the morning. For once, not a place in Rome you have to buy a ticket for. Or pay extra to 'skip the line'. It's free entry. It's the oldest existing structure in Rome and is awe inspiring. There was a very warm grandpa inside taking signatures from visitors as a record of where all people had come from. Like most Italians we have met on the trip, he was quite friendly. 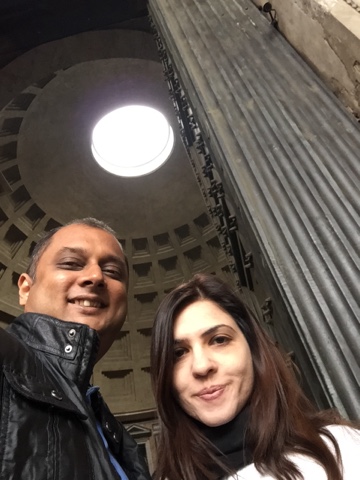 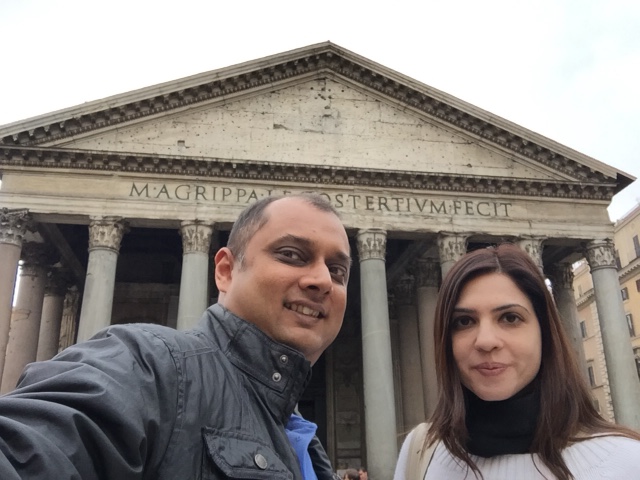 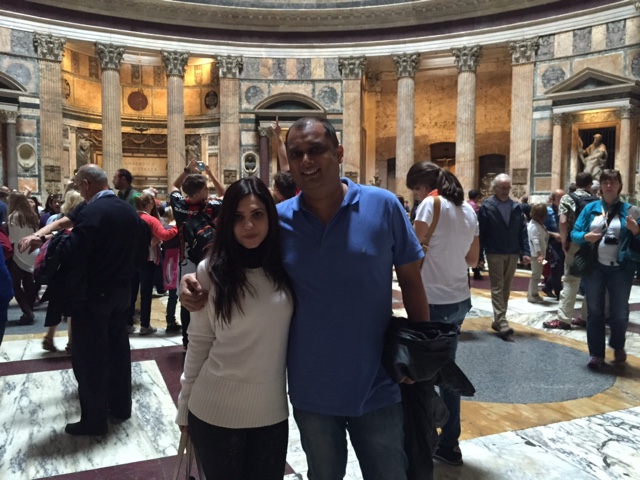 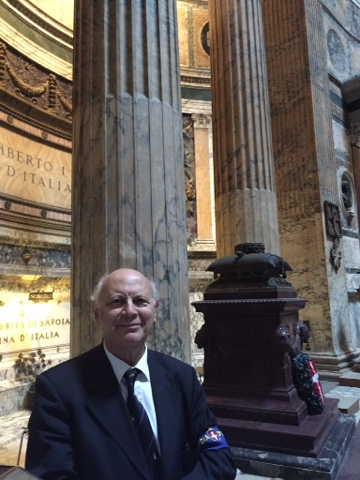 The Pantheon was nice but was even nicer was the gelato we had at Grom when we were trying to figure out how to buy a ticket for the bus back after we had to get off from the first one that we took.
Our friend, Manna, earlier told me about Grom, as she had a gelato there in Florence last year. She whatsapped me insisting that we try Grom.
I remembered that when in saw the Gorm shop and went in with K. The staff  was friendly, spoke English. We took a dark chocolate, no milk, scoop and a cream one with biscuits in it. The taste and texture of the gelato blew us away. Way better than we had on day 1. 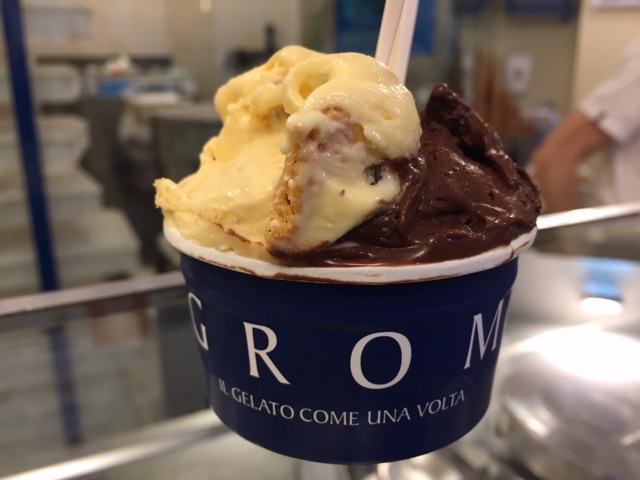 1 small cup is 2.6 euros and we shared it.
The flavours are  intense and linger in your mouth. The chocolate had us in a trance. Definitely a place to return to. I was told on Instagram that they have branches in NYC too.
The Grom gelato was on the back of a mediocre lunch of unseasoned and under flavoured stuffed tortellini that I had, in a soupy Bombay Blues style inert cream sauce, where the only high point was the quality of peas in it. The plate did look pretty though.
The Grom gelato lifted my gastronomic mood. 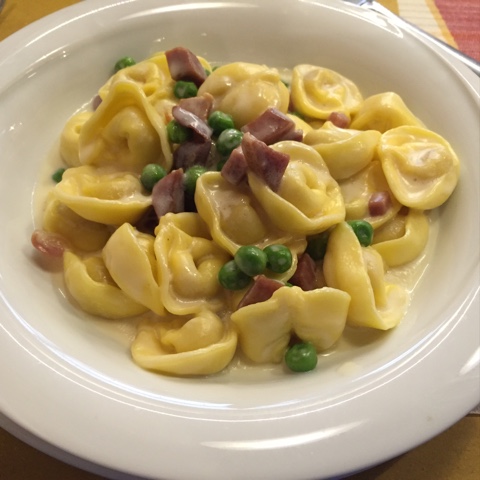 K had a grilled turkey breast which she liked but I found meh. A bit tough and again unseasoned. 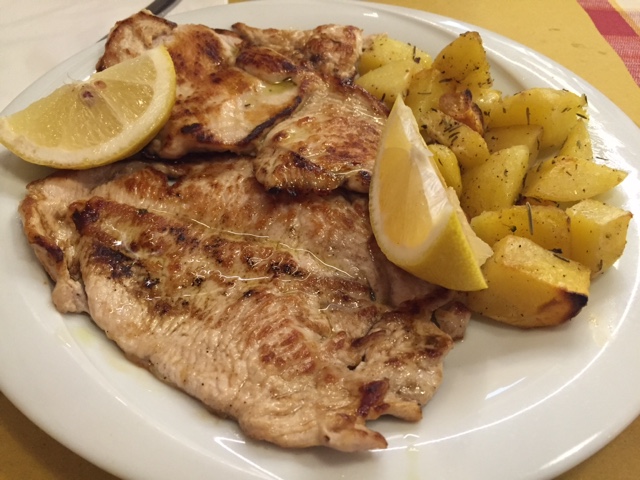 The restaurant where we had lunch was a place which had started as a salad bar and they introduced other dishes too later. Perhaps the salads are better.
What I took away from the afternoon, more than the food, was the warm service of Mr Hussein from Bangladesh who has been here for 25 years and whose son is about to enter a local engineering college. His service was very nice when we sat down and he even offered us tap water since we didn't want bottled water. He was most apologetic as my dish took a while to come after K's. 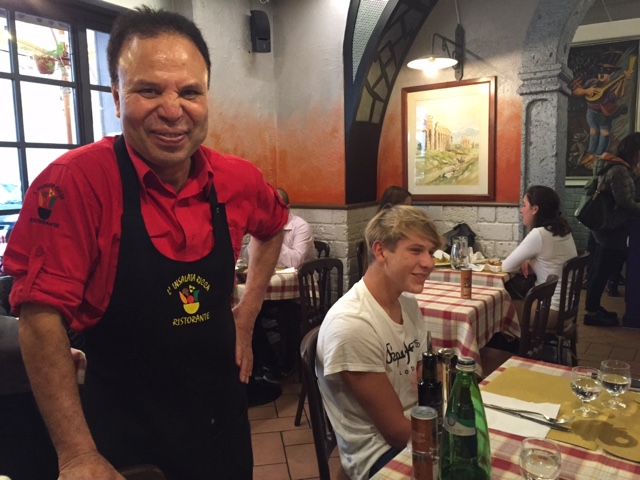 We later chatted for a while when I told him I am from Kolkata and we spoke in Bengali in Rome. K felt that is seemed as if he felt a deep connection with me. The city is full of Bangladeshis actually. I won't forget Mr Hussein's 70 mm smile. It is a smile to cherish and hope to sport oneself.
People say that one should avoid touristy places for meals and today's lunch, which was not very inspiring, bore out why.
But we were tired and hungry and needed to eat then and the service was good.
Lunch was later followed in the evening by a tepid cappuccino and dry sandwich at a coffee bar close to Ottoviano station where we went to as it was drizzling and most other coffee bars were shut. The service was friendly though. 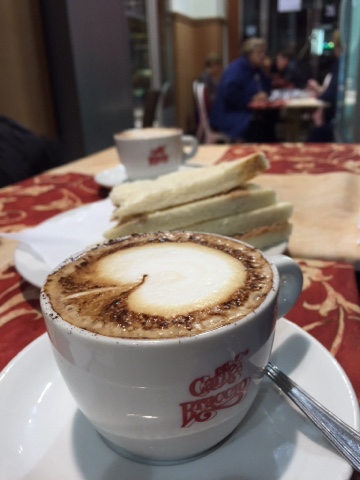 I realised that Grom was an exception. Crowded streets are not where you should go to eat in Rome if you can avoid it.
Our dinner destination, Ristorante Cesare  , in Via Cresenzia, needed us to walk down empty streets from Fabio Massimo. Another strong Rosa from Fabio Massimo recommendation and the food there was mind blowing and we liked it just as we did her earlier recommendations of Scia Scia and Centouno.
The ambience at Cesare, once you step in is pretty classy. The dining crowd consisted of locals including some pensioners. 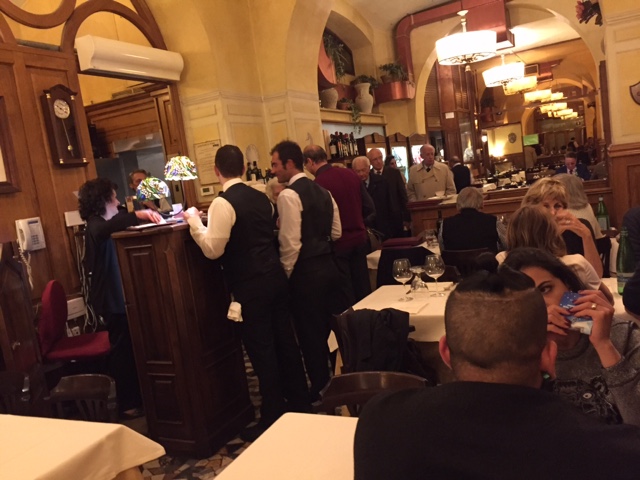 The service, unlike what Tripadvisor reduces had us believe, was not grumpy but actually very friendly and courteous and the wait staff spoke in English.
The owner, Mr Armando, whose anscestors had started this restaurant in 1921, was most welcoming and patiently answered my questions on what we had eaten. He is quite articulate in English and is very passionate about food. He is a hands on owner. He was cleaning up the tables himself and kissed each of the elderly customers who had come for dinner on their cheeks, when they were done, and shook our hands when we left. 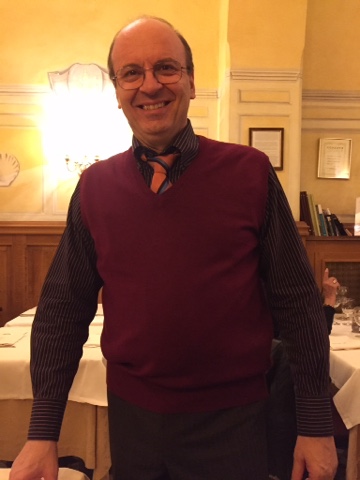 Both our dishes were brought to the table together as I had requested. I will miss then in Mumbai where posh restaurants fail on this count.
K ate a salmon ravioli. The picture doesn't do justice to the amazing dish. The fresh ravioli was very tender and not chewy. The salmon, gratinated with fresh ricotta and parmegano were high on flavour and fired up one's palate with excitement thanks to the intensity of the  diverse flavours of fish and cheese that combined seamlessly. The pasta was wrapped in a thick sauce and was one of the most brilliant the pasta dishes that we have had. 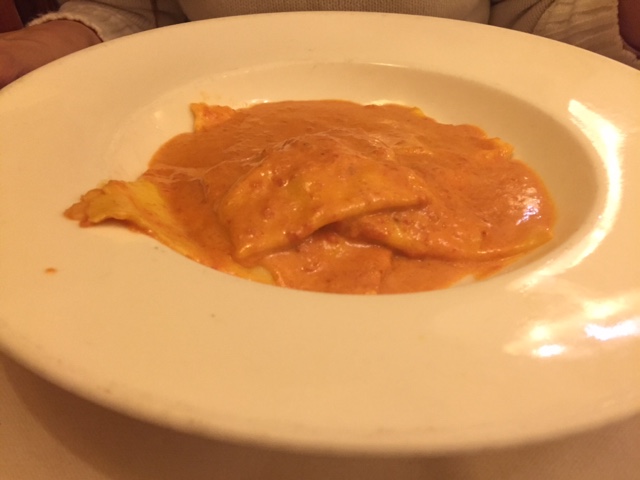 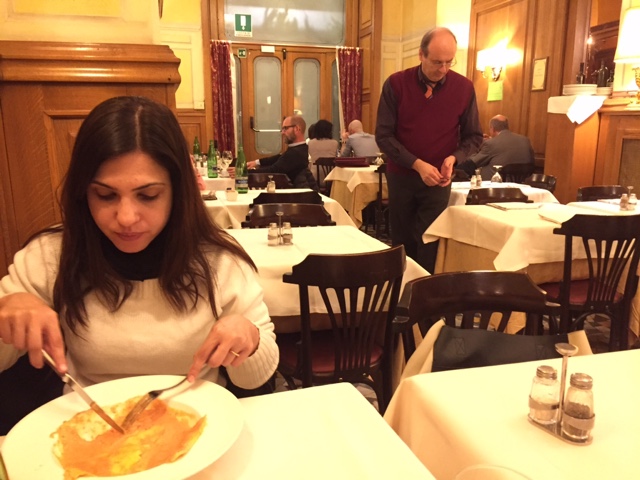 I am not too fond of risottos that I have eaten in India  and thought would order one where to see how it actually is in Italy.
The option at Cesare is brilliant. The rice was separate and not gluggy. As a Bon Appetit reviewer said about a pasta here, it was 'so firm that it could bite'. Yet, the rice was not raw. It was cooked, Mr Armando said, in fresh tomatoes , garlic, oil and seafood...mussels, prawns, squids. No cheese or wine. Simplicity at its powerful best.
The flavours of the tomato and seafood were in harmony and permeated though the rice making it a very heady and memorable dish.
So different from the cheese doused, sauce drenched, underwhelming soggy risottos we get in India.
I was glad that I had ordered this dish at Cesare. I was finally won over by a risotto. 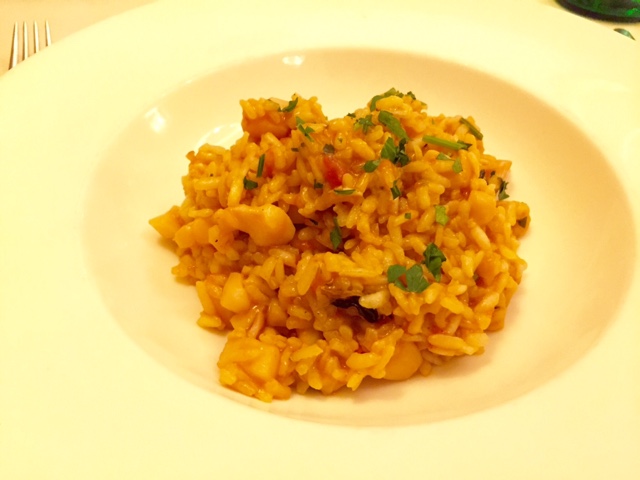 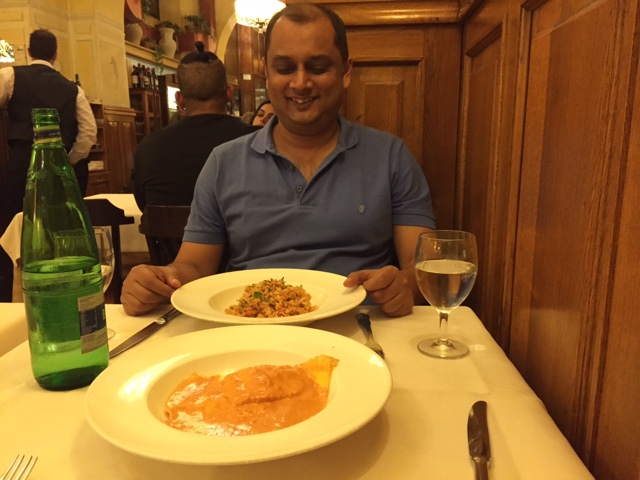 The meal, with water cost us 29 euros and 23 to 29 seems to be our average restaurant spends with no alcohol or, desserts. This was not cheap nor exceptionally more expensive.
The experience right from the ambience to the service, and most importantly the food, was truly special. 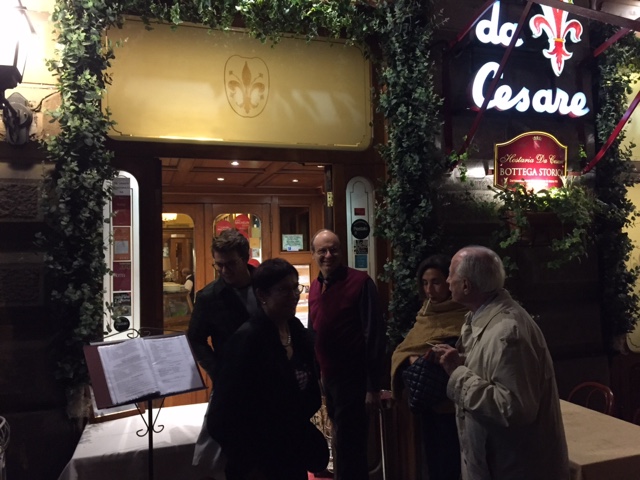 A day on which I had my first lacklustre meal of the trip ended thankfully on a brilliant gourmet high.
Yes, when in Rome, do as the Romans do, and eat in touristy areas only if you dont have an option!
Conti Europe Faraway foods gelato iPhone pics Italy pasta Rome travels