Of statues and steaks. Eating our way through Florence 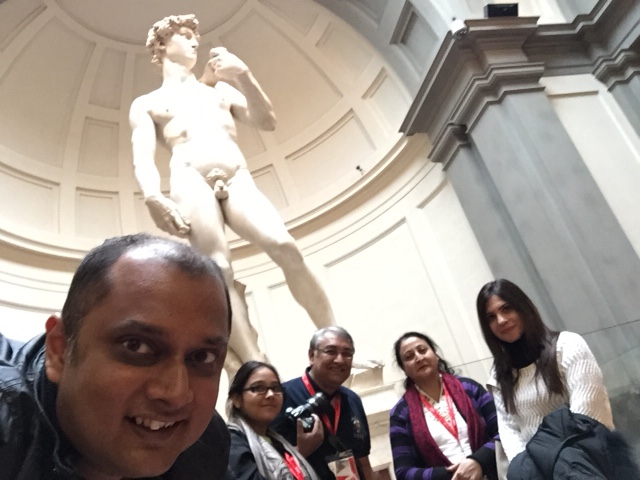 With the Banerjis in front of David

"10 euros? You could have bought this purse for 5 baht in Bangkok'

"But baba we are in Florence not Bangkok'

We were standing in the long queue (despite having phoned, booked and paid extra to skip the line) to watch Michaelangelo's David in the Gallery at Florence and it turned out that standing behind us was a sweet family from Hindustan Park in Kolkata.

Perfect to bring in the Durg Pujo feeling in Florence as it was Nobomi that day. 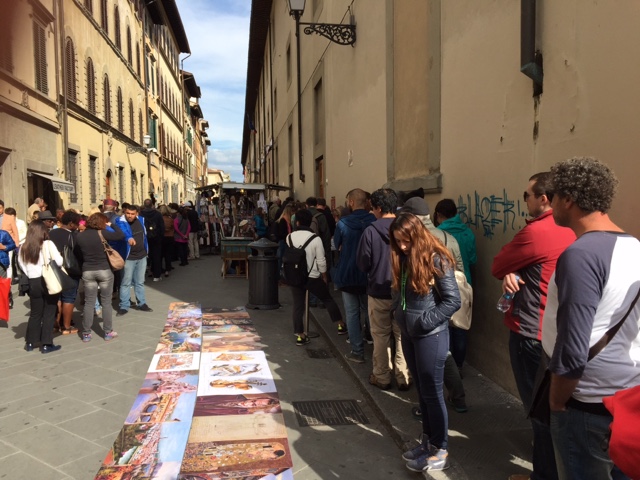 People will tell you that Florence is beautiful and that you should go there to see Michaelangelo's David.

They are not wrong. 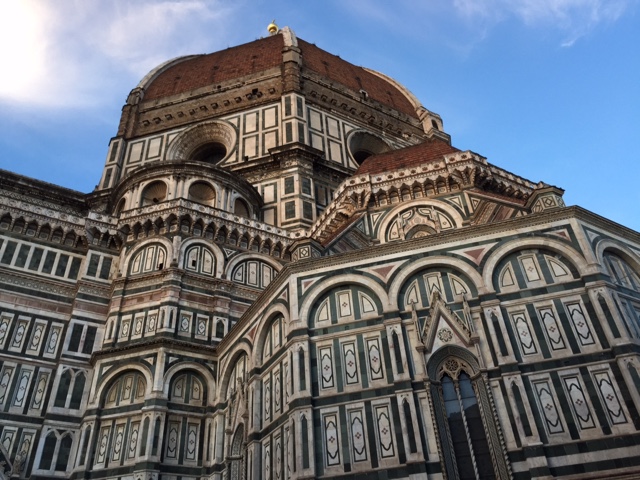 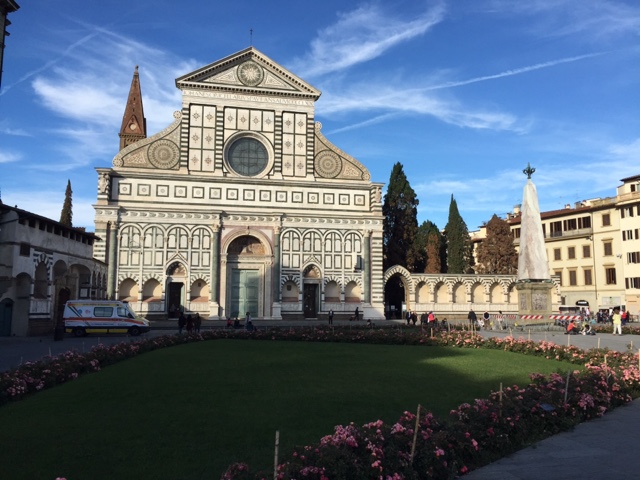 However, if you have been reading this blog for a while, then you would realise that it is the Florentine steak which would excite me the most in Florence.

We had the iconic steak in the 13 Gobbi (dwarves) restaurant close the Best Western Adriatico Hotel where we were staying.

The room in the hotel was small as you would expect In Europe but had a warm glow to it and our room looked on to a bit of the chubby dome of the Duomo. The hotel is close to the station and to the Dumo too. It is a 'proper, hotel, efficient but without the personalised attention that Rosa and Loris had spoilt us with at the Fabio Massimo Hotel in Rome. To put things in perspective, the room in this mid range hotel cost us as much as a sea view room in the new wing in Mumbai's grand dame, Taj Mahal Hotel, did. That's the first world for you! 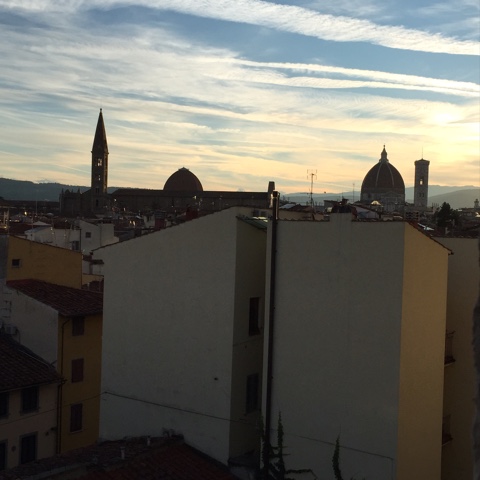 View from the room 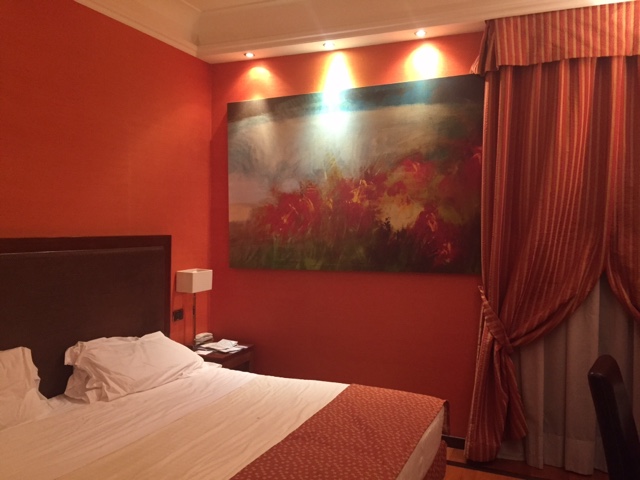 13 Gobbi was recommended to us by chef Irfan Pabney of Mumbai's Sassy Spoon. For once a restaurant recommendation close to where we were.

The restaurant had a nice buzz to it and the crowd seemed to be a mix of tourists and locals. It looked like a posh place and had a cover charge too. At 44 euros, it was our most expensive meal of the trip. Till we hit Milan and then Venice! 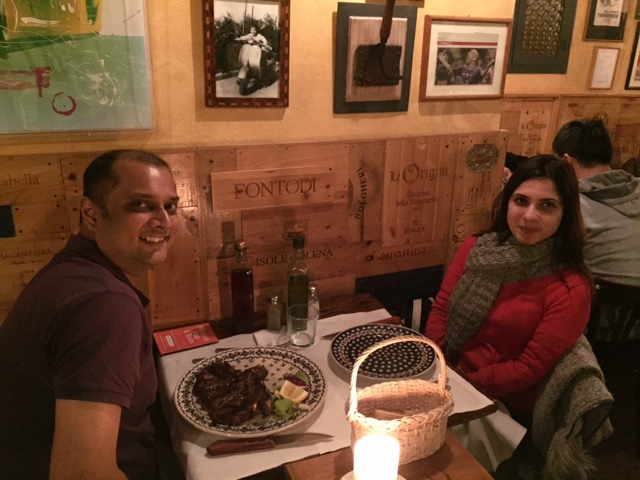 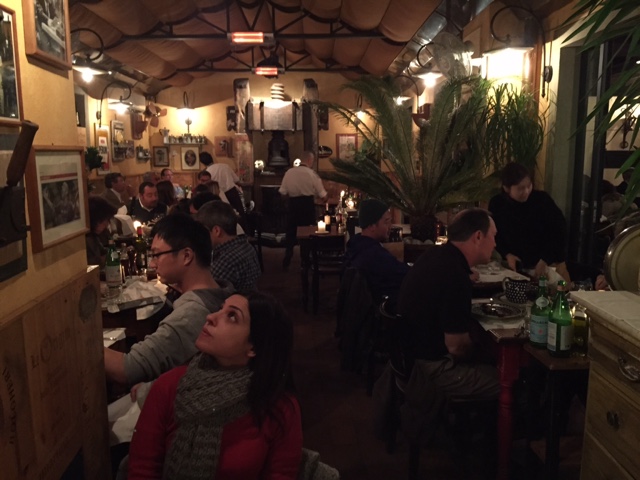 There was an elderly waiter who seemed quite pushy but we got a younger waiter who was efficient and not pushy and got our instructions properly.

It was cold outside and we started by sharing a pasta and white bean soup as our friend Dr Pradeep Rao told us to try it. It was a good bet in the chill. Was hot and nourishing.

Pradeep later told us that we should have added extra virgin olive oil to it. 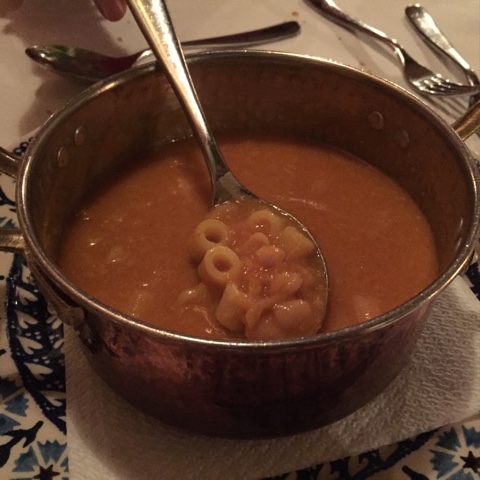 Then came the famous Florentine steak which we shared. The steak is the most expensive dish in all Florentine restaurant menus. I asked for a medium done steak as I had read that they tend to do their steaks under here.

The taste was epiphanic and was of the sort that lingered in your memory for well after the meal was over. The meat was juicy and there was a delectable mild char to it and the seasoning was perfect.

The dish lived up to its high billing. 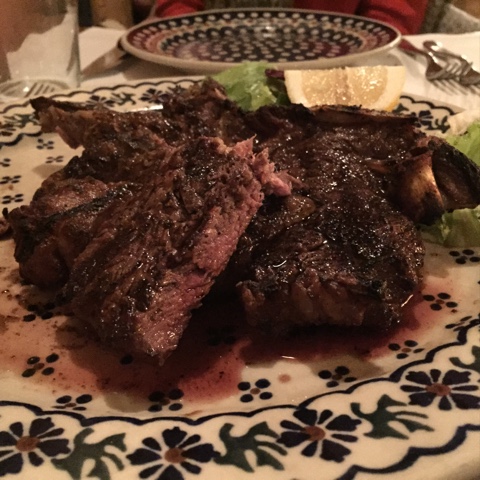 The night after, we had the best pasta of the trip so far in a restaurant called Cento Poverti. A seafood spaghetti where the flavours of the scampi, clams and squids came together as if they were in a classical concert conducted by a genius. There was no cheese or cream and it was just all about the taste of the seafood. 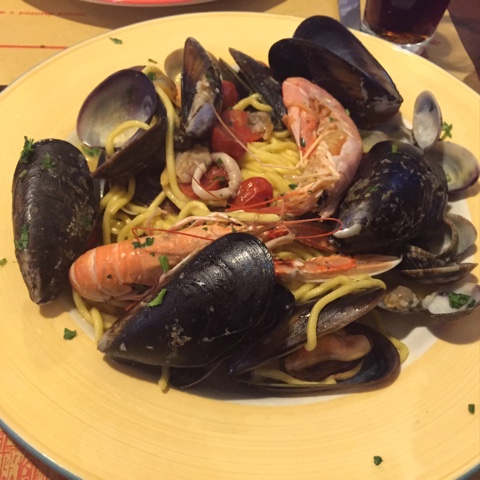 We started this meal  Cento Poverti with a brilliant pesto and tomato pizza. Lovely crunch to the edges, soft inside and a brilliant pesto flavouring, bathed in lovely olive oil. Good stuff though eclipsed by the brilliance of the spaghetti. The pizza was vegetarian and cost less than 10 euros and was too much for 2. 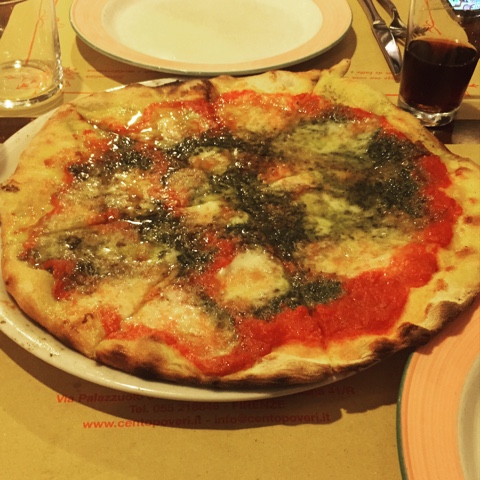 Here our meal was just above 30 euros and the place, which looked empty from outside, was quite packed inside and had a charming atmosphere. Tripadvisor reviews were uniformly good, which is rare for a place, and Cento Poverti deserved it.

The concierge at our hotel recommended it the day we landed but that day it was past lunch and looked empty. I hate to eat in empty restaurants. I am so glad we went there on our last in Venice making our culinary send off here a lot more memorable than it was in Rome. 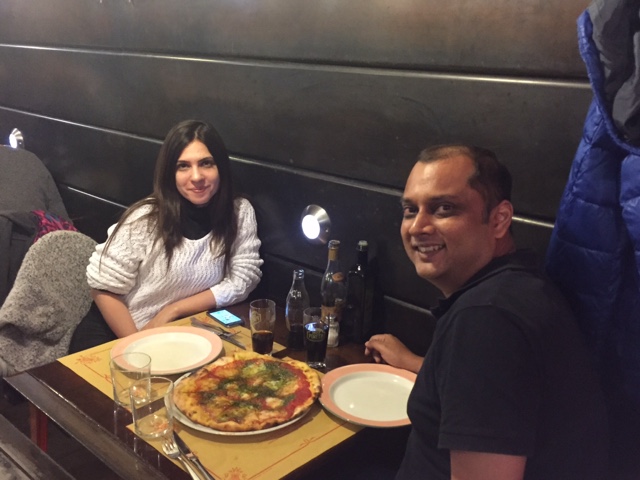 In fact our first meal at Florence wasn't bad at all. We followed the crowds and got into a busy tavern called Trattoria Georgio. They had a sort of Italian thali going on! 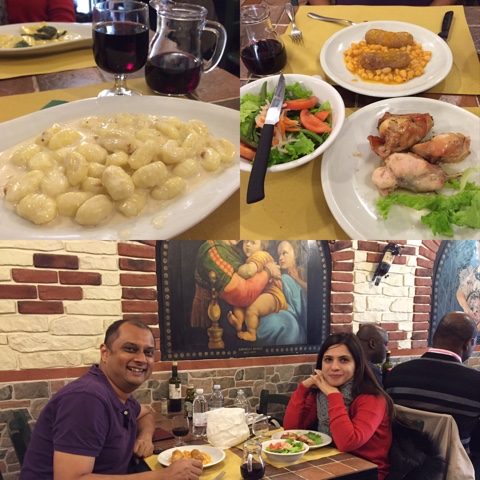 Another place we were fond of, and went back to for a second visit too, was a coffee shop called Scuderi near the Duomo. Had some lovely hot chocolate, salmon  and ham croissants and biscotti there. You pay less if you ate at the counter or the tables beside rather than in the restaurant proper.  A bit like Flurys and the place reminded us of Flurys too. The restaurant was opened in 1939. The year world war 2 started. What timing! The early years must have been slow for them. 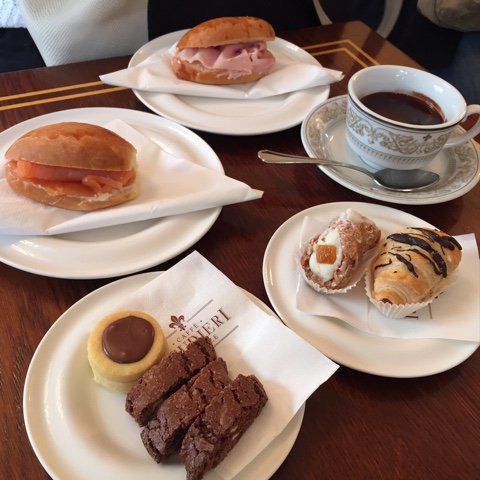 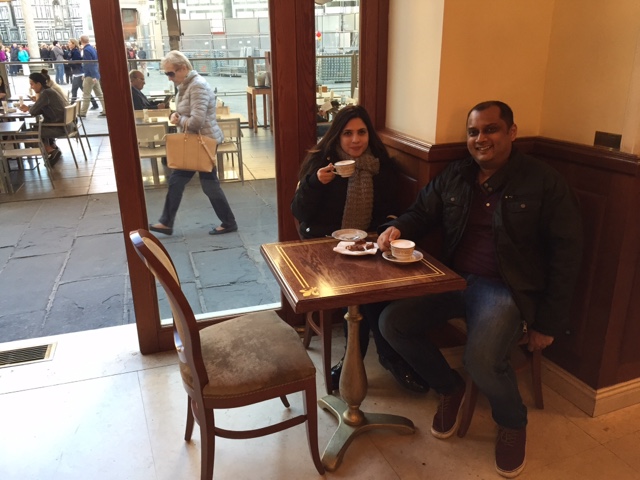 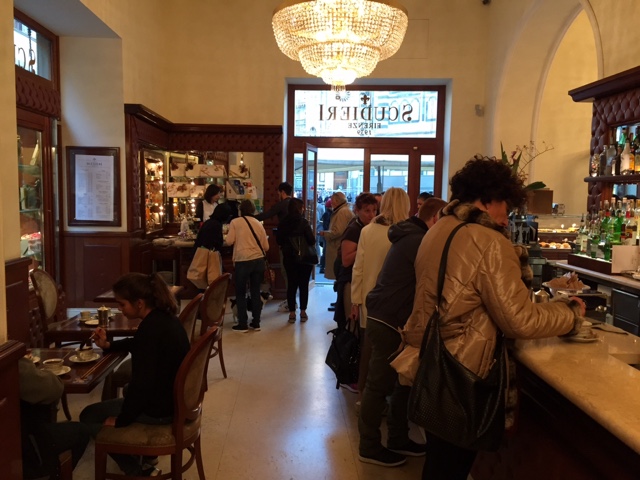 We also loved the macarons, which they call macarals, at a shop Rinaldini which had a kind granny ('take my pictures from far or the wrinkles will show') at the counter. When I told her that I though macarons are French, she firmly said that they are Italian and that the French have stolen the idea!

We brought in our 14th anniversary with macarons from here in our hotel room. 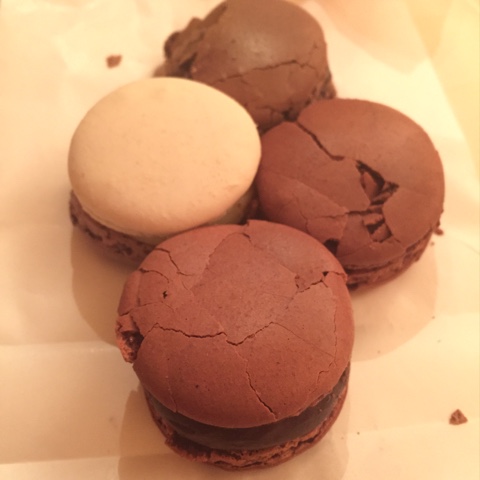 We turned 14 in Florence 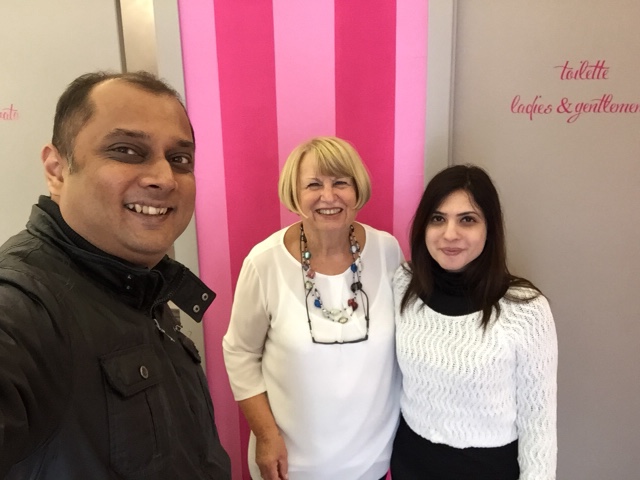 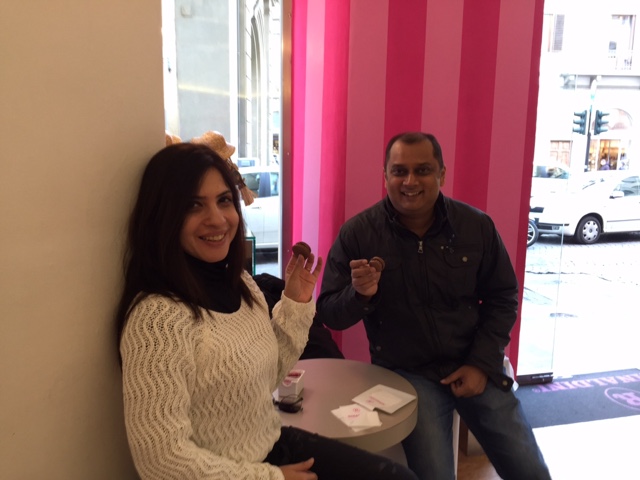 Countdown to the anniversary

The only damp spot in Florence was our wild goose chase for tripe sandwiches or lampredotta at a place called Pollini recommended by Simon Majumdar. We reached there after a crazy, long walk through Florence to find that the stall was shut by the time we reached. 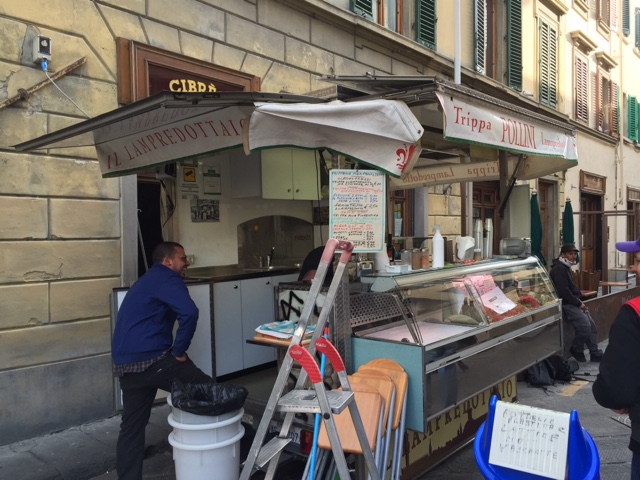 I had it at another stall near by and found it smelly and didn't like the lampredotta too much. I think Bohri Mohalla in Mumbai is a better bet for offal. 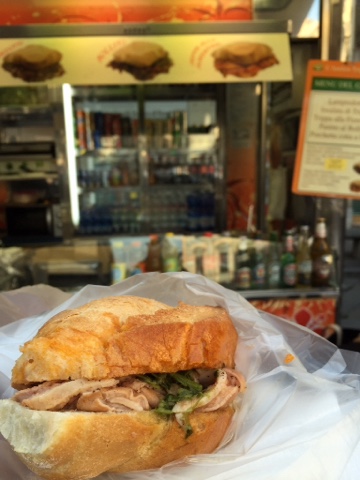 Florence doesn't offer much in terms of street food in the touristy parts. Your best best bet for a cheaper meal is at a takeaway pizza and sandwich shop. And at a coffee bar as long as you stand and do not sit.

Restaurants seem to be more expensive than comparable ones in Rome.

There are a lot of shops to buy cheese and meat in. We didn't as we had two more cities to go to.

Florence is  the city of the Renaissance but has a lot for devotees of great food too.

I will remember it as the city where I would look up during every meal, grin and said 'I am so happy'. 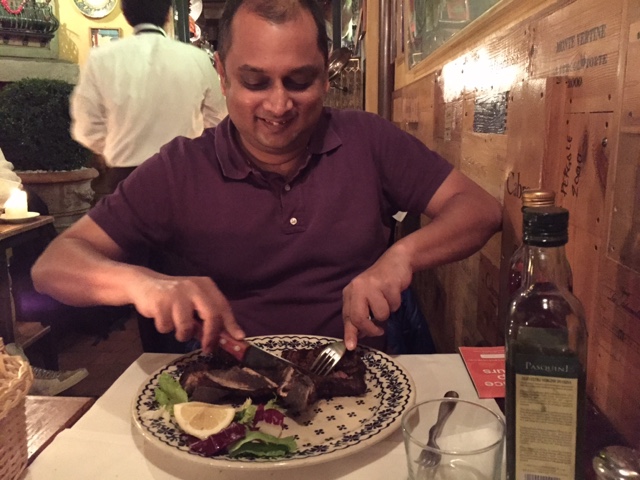