Pizza and Papa. Day 3 in Rome and the Vatican. Bonci & Giacomelli 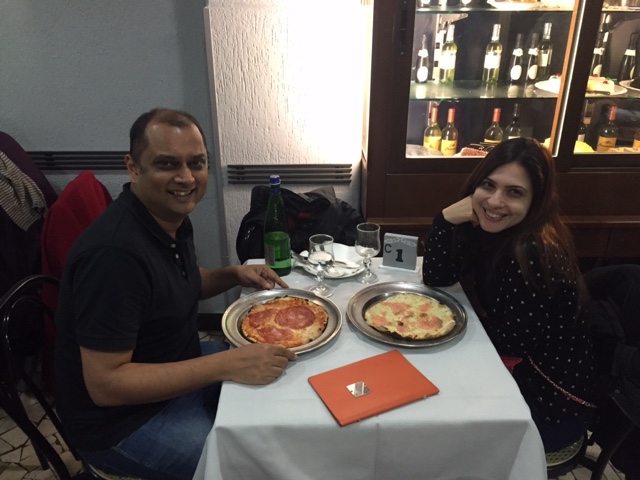 At Giacomelli
Day 3 in Rome is one which I will remember for two pizza outings and a visit to the Papal grounds of the Vatican.
We went to Bonci Pizarrium near the Cipro Metro station for lunch before going to our Vatican tour.
This is a 5 minute walk away from the Vatican museum. In the process we figured out that you can buy metro tickets from the newspaper stalls and don't need to depend on the machines in the station. A tip given by Rosa of our hotel, Fabio Massimo design. We checked for über twice at night but no cars were available. 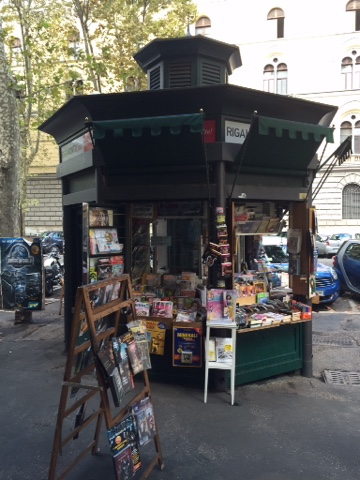 Bonci was recommended to my Katie Parla, a local food writer,  who also has an app of her own with Rome food tips. I later saw that Bonci's made it to most 'top 10' pizza places in Rome pieces on the net. Bourdain apparently featured it in his Layover episode of Rome
it's a small place where you queue up and wait. Bonci comes out himself occasionally with pizzas and seems to be quite the pizza rockstar if you go by local web sites. He came out with a tray of pizza covered with ham and gave a long speech in Italian.
The pizzas are rectangular. They cut a slice with a scissor after you place an order, weigh it and then heat it for you. You can indicated the size you want through gestures. They speak largely Italian and some broken English. The pizza topings keep changing and there are no labels or menu which makes it difficult to order. 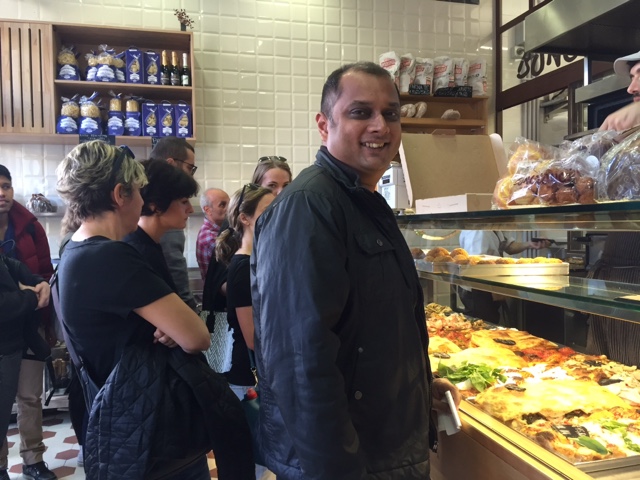 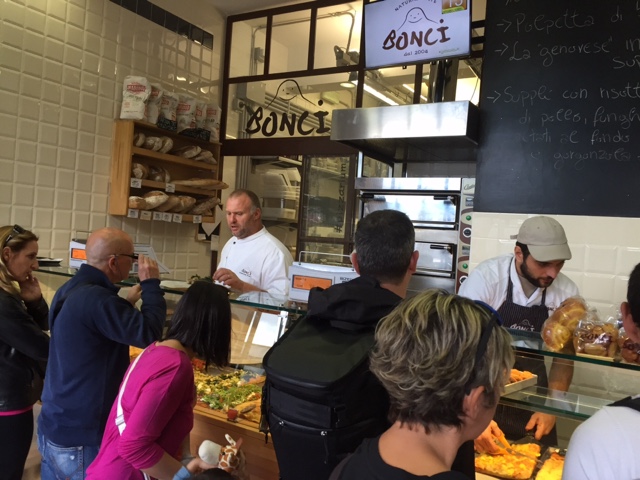 That's Bonci in a beard
I asked the person at the counter what was good and he said 'everything'. 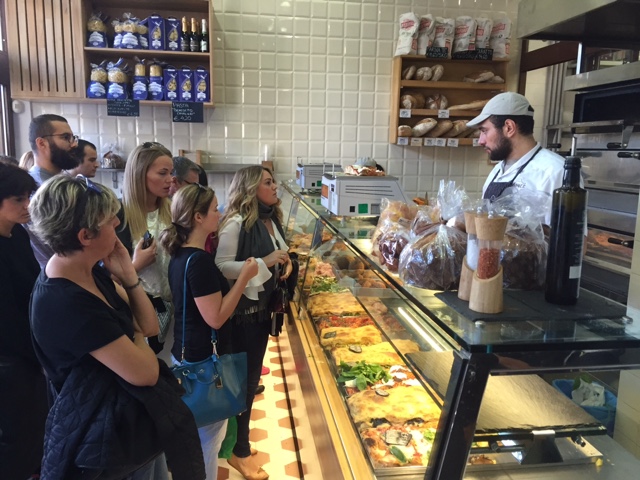 You can either take your order as a takeaway or stand and at eat at one of the tables on the road and eat like we did. The crowds kept pouring in.
We took one pizza which had ham on what seemed like a base of fish, possibly cod, pate with sweet orange segments. Quite a unique combination. Interesting but not riveting. The other was mozzarella and potato, which the Internet later told me is a popular option here. 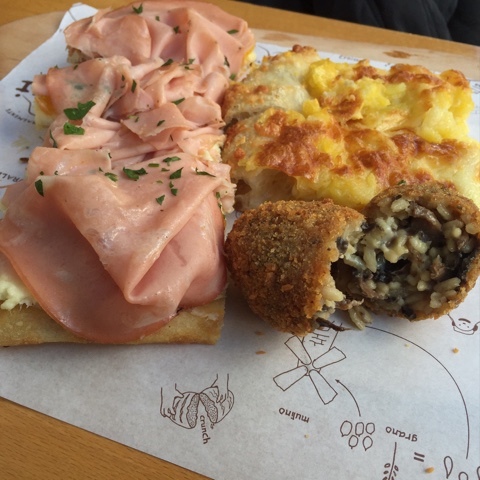 The sourdough bread crust of the pizza had a nice textural contrast. Crisp outside and airy inside. We liked the potato one more.
I think the pizzas were nice but didn't blow us away. Also these pizzas are not thin crust ones. We had seen similar heat and eat pizza by the slice places in the more touristy areas. Work on the same principle except there was a steady flow of freshly made pizza in Bonci. We tried two options. Wondered how the others were.
Thanks to the crowd the pizzas moved quickly and fresh lots were brought in continuously. Worth a trip if you are at the Vatican.
I tried a suppli or a risotto ball. The one I tried was flavoured with blue cheese and mushrooms and was nicely intense to eat. 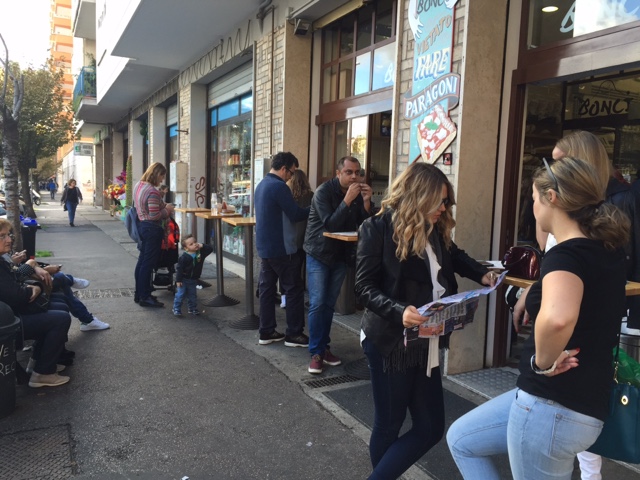 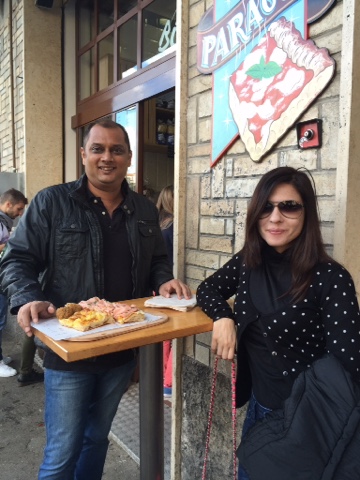 I liked the vibe of the place which reminded me of Biegel Bake in London's Brick Lane. It's not too expensive and our meal cost us about 13 euros.
We followed this with the Vatican Museum tour. We booked it with Maximus Tours through the net. Their guide Christina, was pretty articulate and earnest. This tour was a skip the line one and we saw that the queue was pretty long. The tour was a bit tiring though seeing the Sistine Chapel was an awe inspiring experience. Christina gave a good context to the life of Michaelangelo (he apparently hated the Pope who asked him to paint the Chapel and women too unlike Raffaelo who loved women and caught syphillis!) and the story behind the Chapel though we wished we didn't have to go through so many rooms to reach it. Seeing the images on the Sistine Chapel room which you had seen in books all your life was an awe inspiring moment. Christina told us that the roof was restored by Fuji who now own the copyright to its images which is why you can't take pictures of the ceiling. Reaching inside was like reaching the Md Ali Pujo pandas in kolkata after a long queue and then standing and taking in the beauty while crowds waited to get in once you left. Christina's energy is admirable and our group was a happy one which had people from all over the world. We ended by seeing the St Peter's Basilica which is apparently the most important church of Roman Catholics. It seems that the pope, Papa Francisco as the tee shirts say, will make an appearance tomorrow morning. 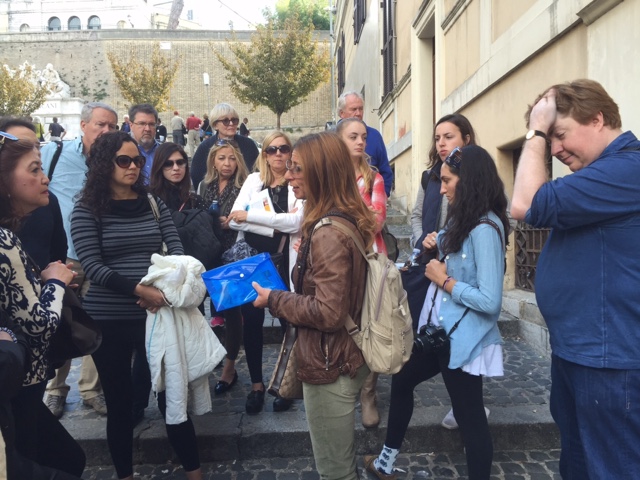 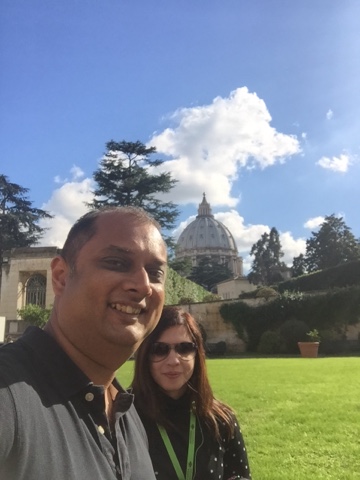 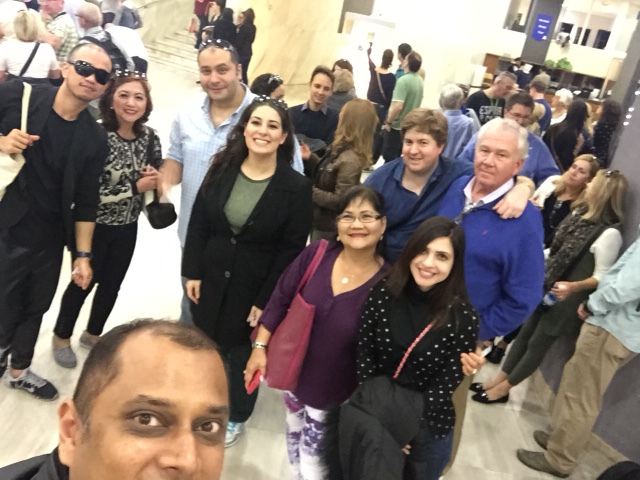 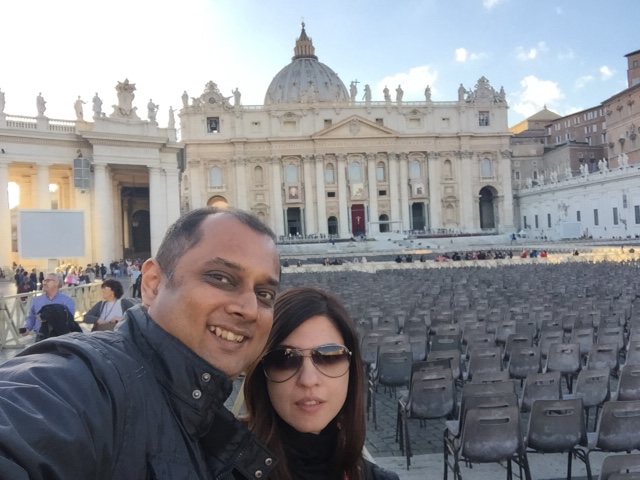 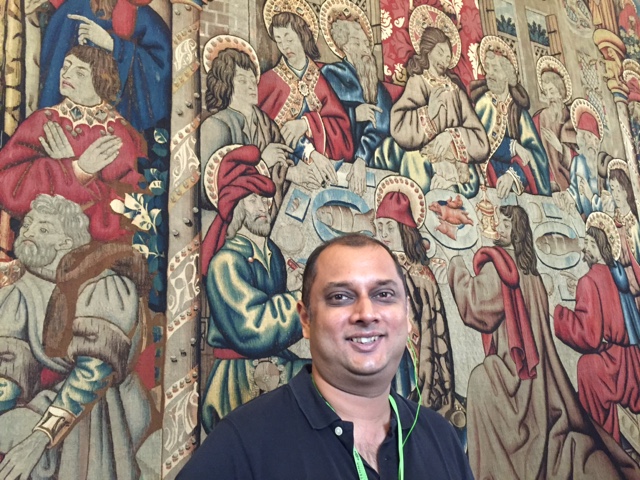 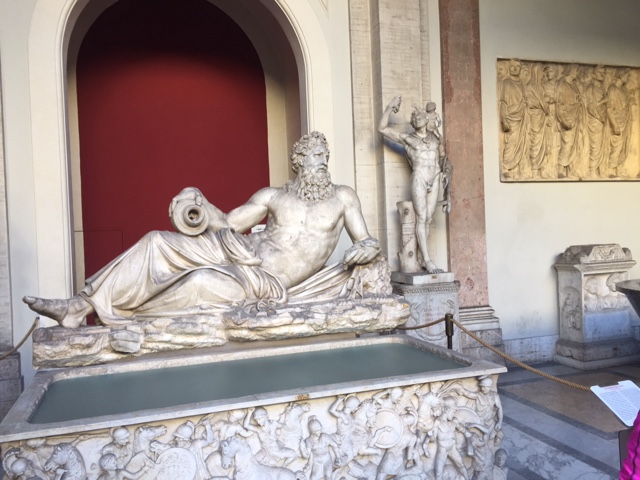 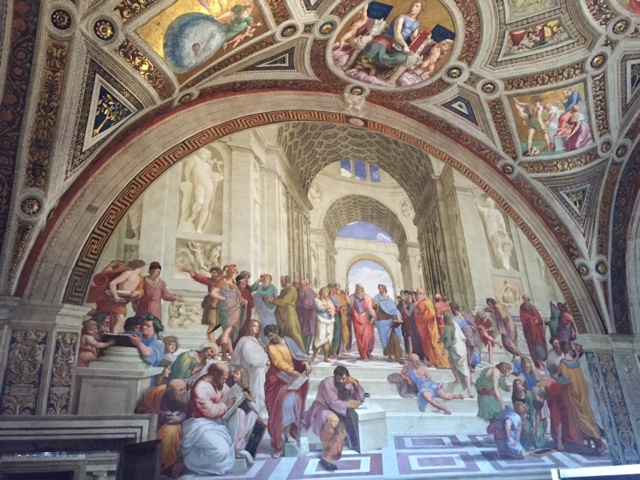 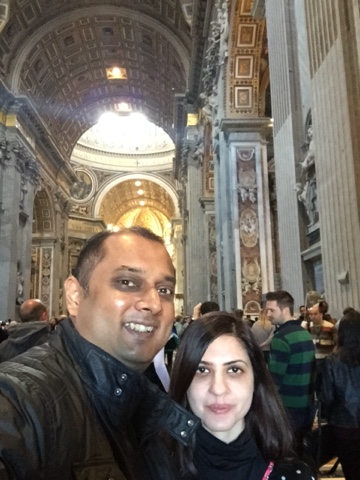 We had some coffee at Scia Scia and then rested in the hotel before heading to j for dinner. A place recommended by Loris from the hotel who helped us check in on day one. Rosa suggested we take a cab as this is in a deserted part of town. Turned out to be a good idea as the roads were empty. 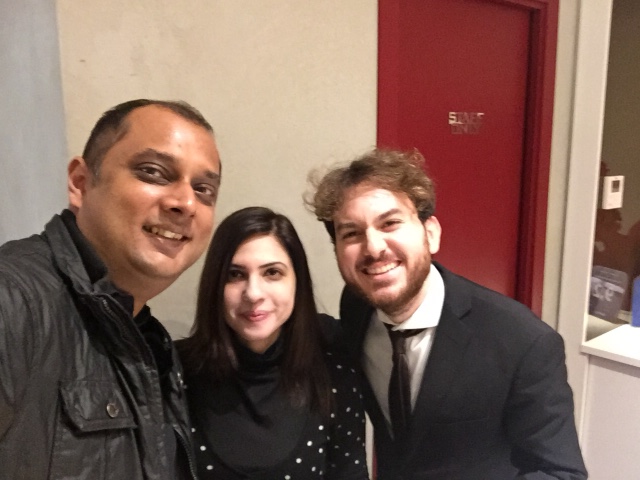 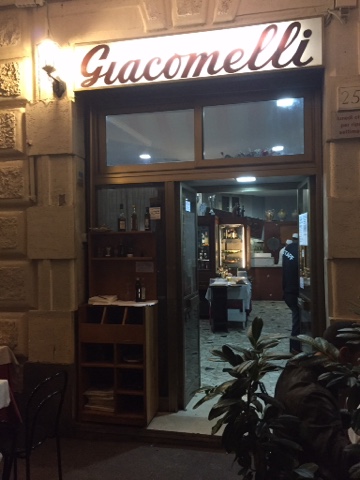 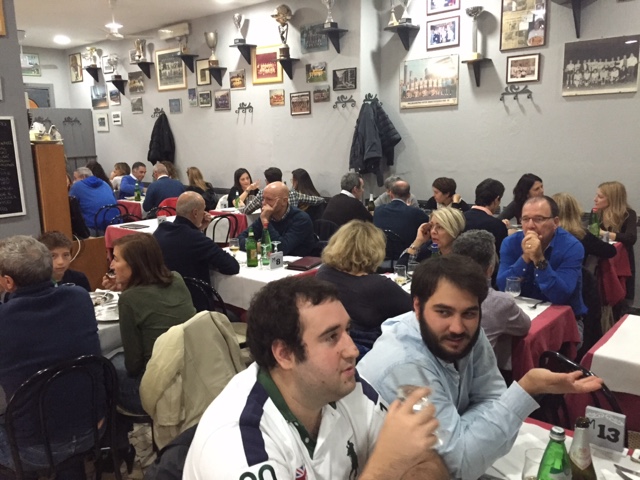 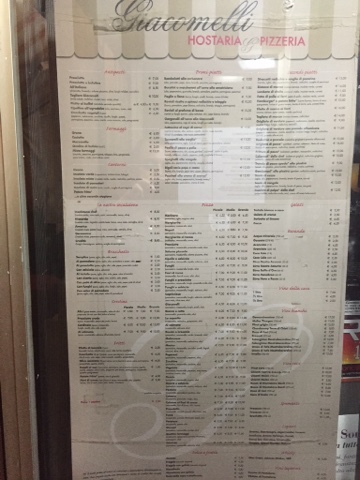 We had to wait a while to get a place but I am so happy we went there. Giacomelli (via emilio io Faa di  bruno)very different from the other restaurants we've been too. In fact K observed that each of the restaurants we have been to in this trip has been different from each other.
We gave our names to the lady at the counter and waited in the October chill for our table. To make matters simple I gave my name as John. Don't ask me why.
The place was bursting with locals and reminded me of the Irani cafes of Mumbai. Some of the diners seem to know the staff.  Giacomelli was opened in 1946 but doesn't seem to be a part of any of the top pizza place lists that I saw on the net. Yet the place was packed. Service was prompt and friendly and they helped us get a cab at the end. Clearly a happy place. A bit like Britannia in Mumbai without being over priced or Arya Bhavan in Matunga. It is quite a large restaurant. The decor and ambience very simple and homely and warm. 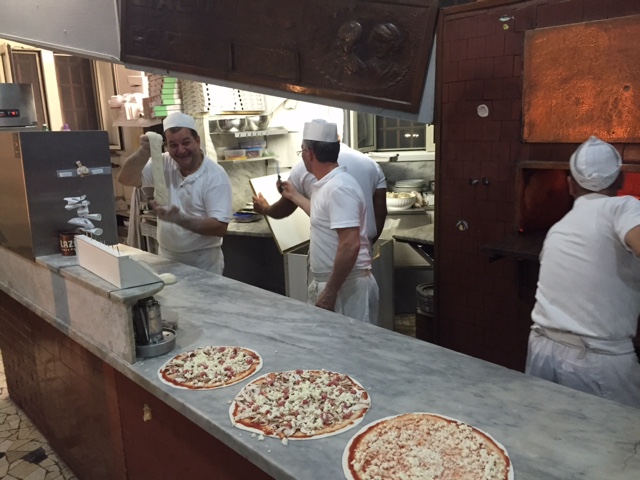 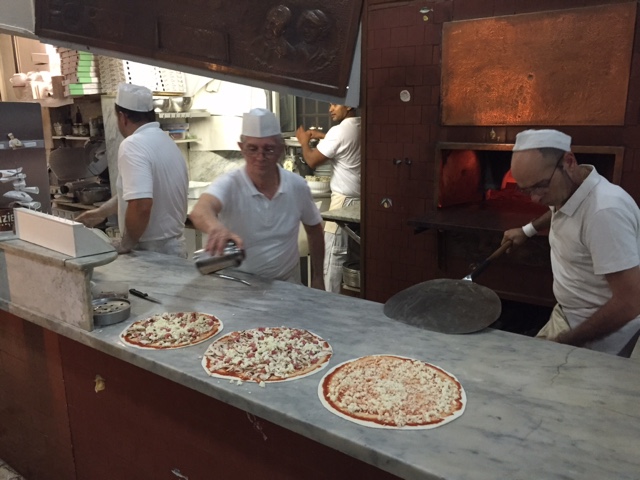 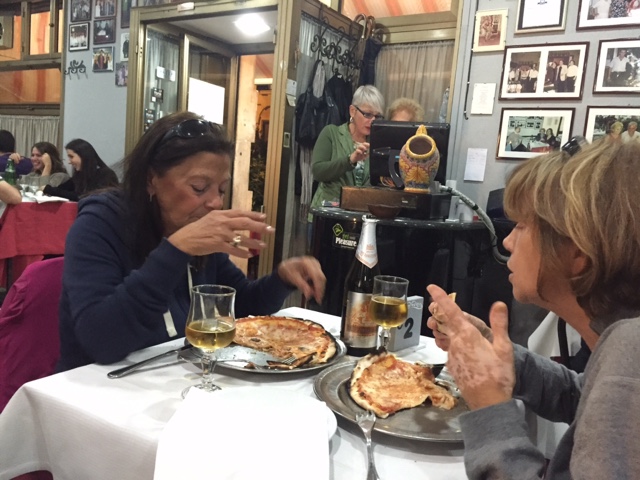 They have an English menu too and some of the wait staff spoke English. It's not too expensive a place by Roman standards. We ordered for 2 pizzas and a water which came to 15 euros and this is a sit down place! It's just that the taxi rides  ( close to 20 euros) that made it expensive.
Our pizzas, a salmon and  a salami one, were freshly made by the grandpas standing by the wood fired oven. Their experience showed in the lovely thin and supple crust. The flavours were simple and yet gave a lot of pleasure.
Unlike in India they don't give you chilli flake or oregano with your pizza.
They don't slice your pizza. You order individual pizzas and don't share them. You cut them with a knife and fork and eat them with your hands. We ordered small ones which cost about 6 to 7 euros each and were enough for one. The pizzas were simple but flavour packed and the tastes well balanced.
They also had some Irani cafe sort of pastries in the dessert counter.
This is traditional food at its best and I think enjoyed Giacomelli more than we did Bonci. More my sort of place. 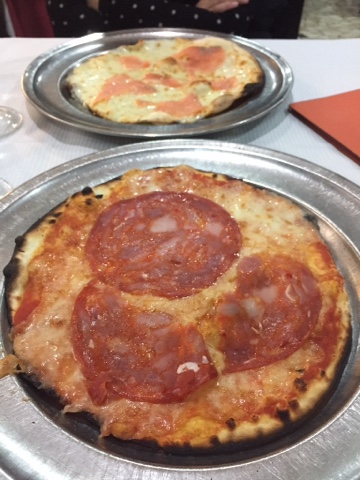 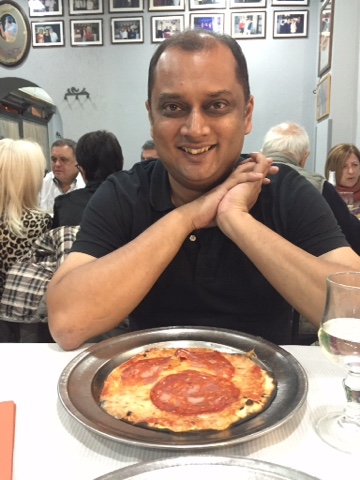 Both pizza outings were very different experiences and both had a lovely atmosphere around them. A taste of the new and the old.
This was a day which made me realise that there is no one thing called the 'Roman pizza' as the pizzas at both places were different from each other.
So pasta done, pizza done, gelato done, now for risotto.
Europe Faraway foods iPhone pics Italy pizza Rome