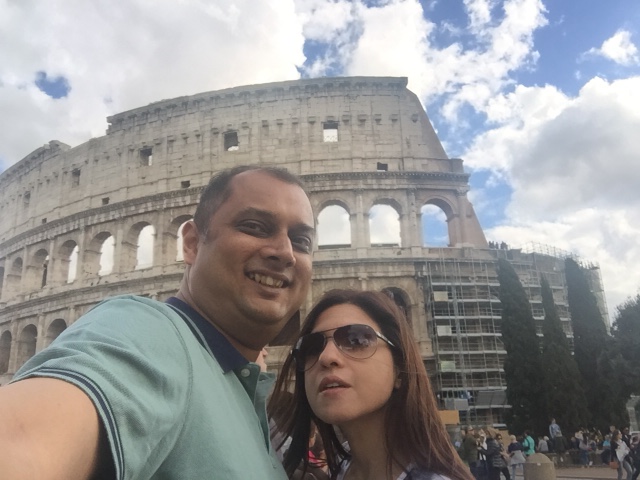 Sightseeing doesn't interest me much nowadays when I travel.
It's the people that I meet on the road that I remember the most and the food that I try. I try to keep an open mind about food and the people I come across. Has worked for me so far.
We ignored the dire warnings of the morning concierge at the Fabio Massimo Hotel about pickpockets and decided to take the metro in Rome today and not walk 40 minutes that she suggested to reach the colosseum.
Not having a DSLR to lug is liberating. One less thing to carry or worry about. And, as K said, not having to take pictures of the same dish twice with two devices.
We did 4 metro rides without our pockets being picked today. Beginner's luck?
The metro looks grimy. Wasn't too crowded except at Termini, where my early years of boarding a train at Dadar came of use and we shoved the people who hogged the gate and entered the train. Yes, that happens in Rome too and not just in Virar locals back home. Took us a bit of time to figure the ticket machines but we finally did. A ride anywhere is 1.5 euro and the machine will accept money as long as the change to be returned is not more than 6 euros. Ticket counters are hardly open so you depend on these machines.
We did the Colloseum today. Booked online to skip the line. Didn't take a guide though. The realisation of how many years old the place is was humbling. 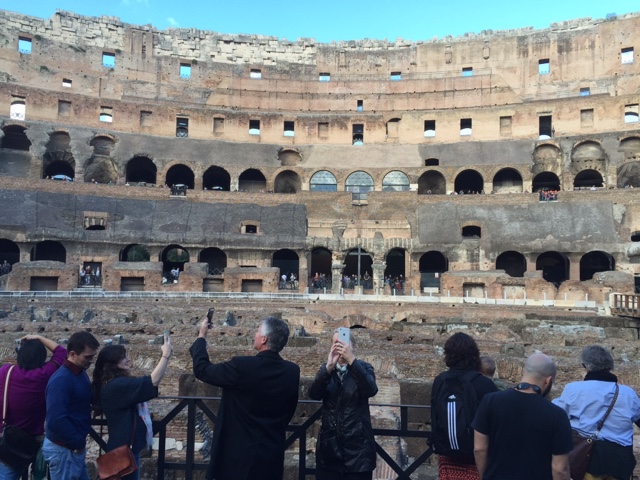 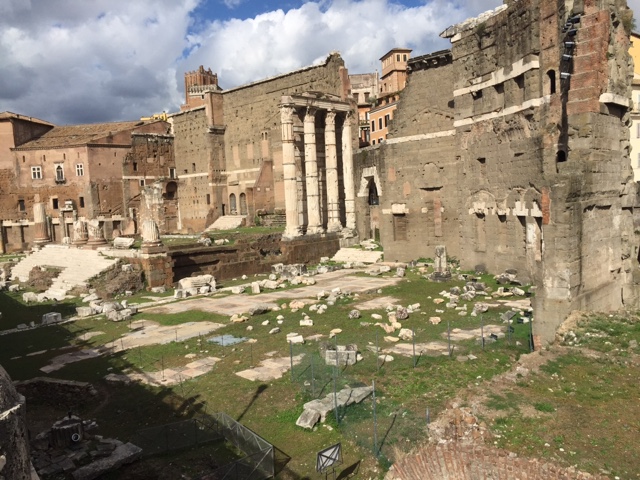 The coffee we had at a nearby place was the most mediocre of the trip and as they say, avoid places near touristy areas for food. Like in Flurys in Calcutta, we had to pay extra for sitting at the table rather than take our sandwich to have on the go. The bill was about 12 euros. 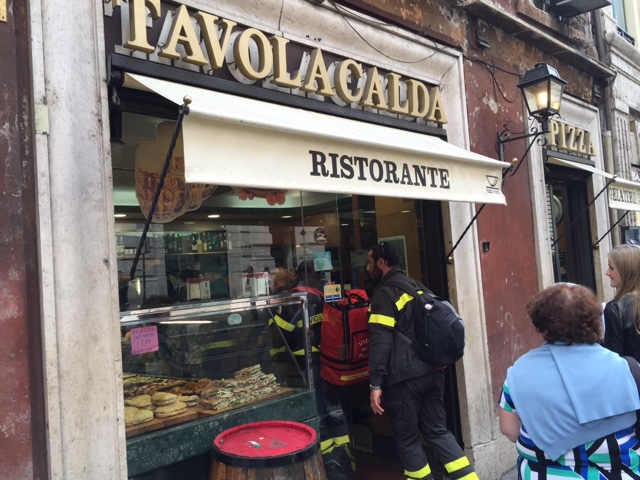 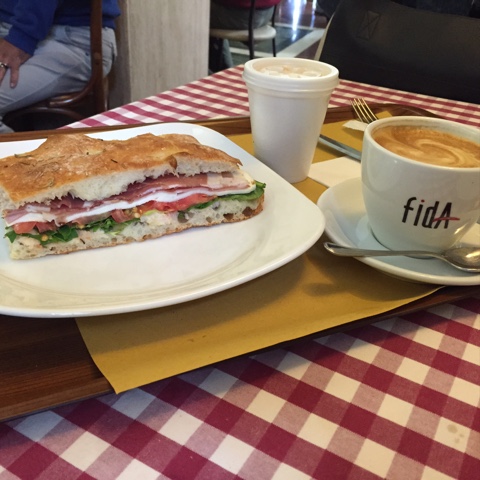 We came back and rested and then went in the evening to the Trevis Fountain which, like the Colloseum, is a bit of a walk from the Barberini station. Our hotel, Fabio Massimo, is close to Lepanto station.
The Trevis fountain is still closed for renovation so we couldnt throw coins into it. We found a nice shop to buy Italian condiments close by though.
If the Colloseum reminded K of Russel Crowe's thighs in a skirt then Trevis reminded me of Lizzie McGuire. Wished we had watched To Rome with Love and Roman Hiliday again before coming here.
Must read the post Mom had written on our Milan and Venice trips before we head there. Here is the link http://www.finelychopped.net/2011/08/great-continent-tour-1974-iii-austria.html?m=1 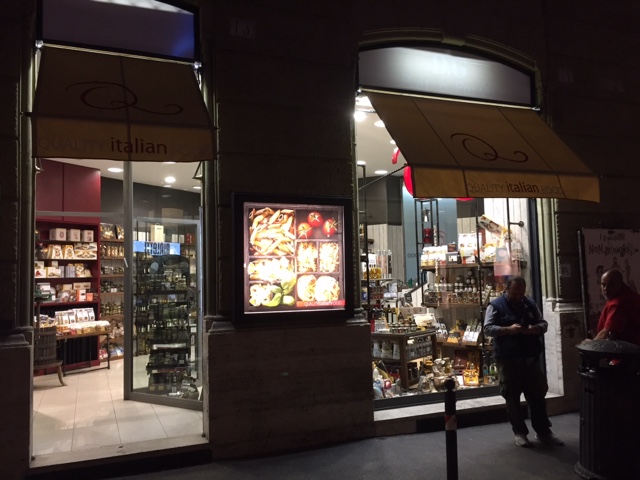 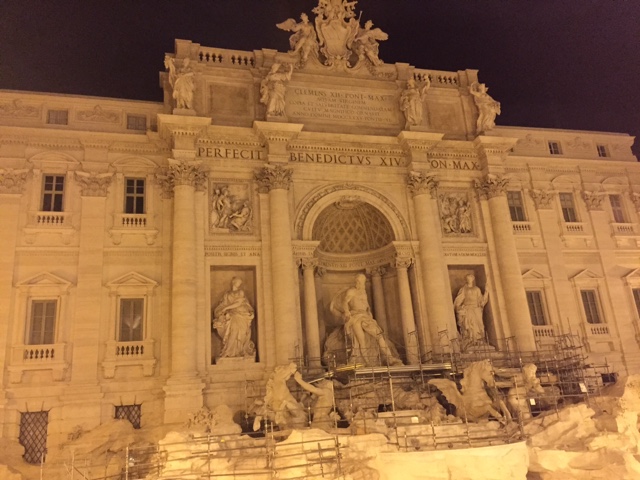 Which brings me to the question, 'who is Rosa'?
I had mentioned her in the post yesterday. She is one of the front staff folk at the Fabio Massimo and comes to work post lunch. She is very warm and helpful and is most enterprising. She is from Sicily but loves Rome too.
We went two of her eating out place suggestions today and both were great picks. Both are on the Fabia Massimo lane next to the hotel. She had made the suggestions with a lot of passion and the results bore out her enthusiasm.
In the afternoon post the Colloseum we went the Scia Scia Cafe for the coffee with chocolate Rosa suggested. It's an old quaint place located beside the Fabia Massimo hotel. The staff and the guests were both silver haired. The cafe exuded warmth. 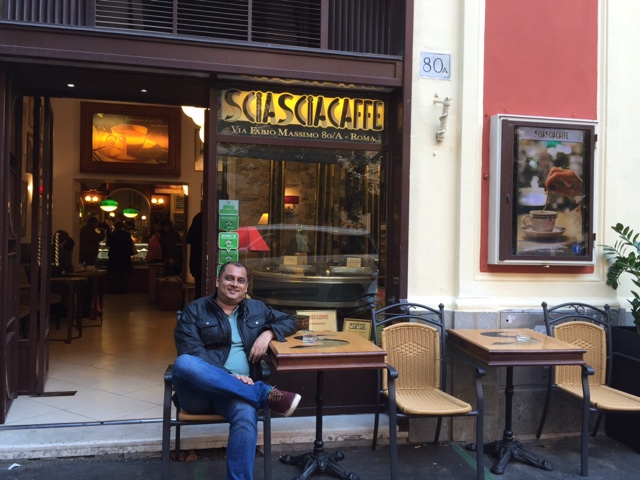 Rosa says she goes there everyday for coffee before work. A bit like Candies is for us. Like K says, we always find a Candies on our trips and this time it is Scia Scia. Like Candie they don't accept cards either but have wifi. 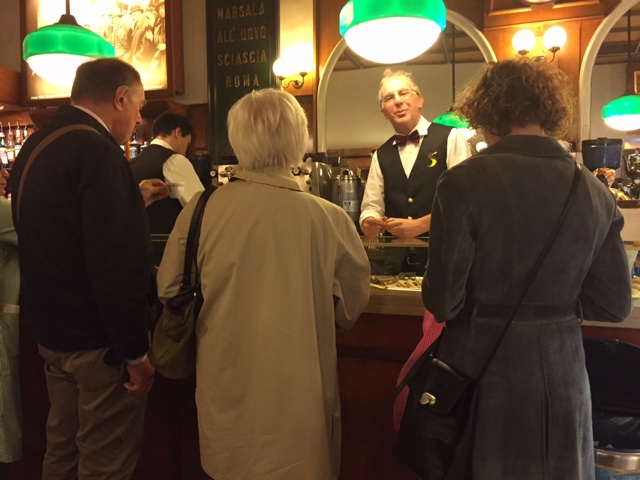 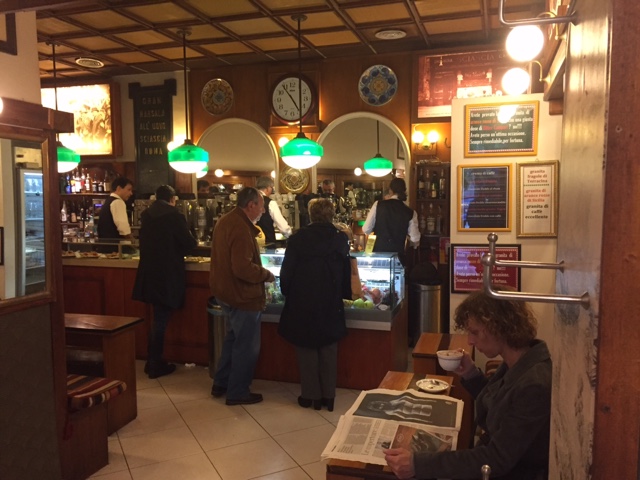 We had some lovely coffee with really soft and flavourful ham and cheese sandwiches and shrimp and mozzarella ones and some caviar canapés. All for about 15 euros. Loved the buzz there and the neighbourhood cafe feeling. When I told local blogger, Katie Parla about it, she replied saying 'that place rules'! 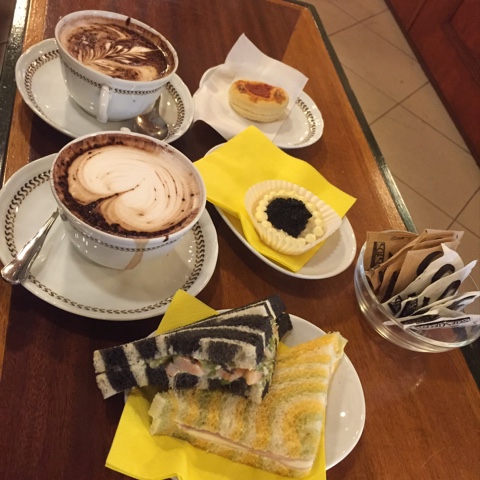 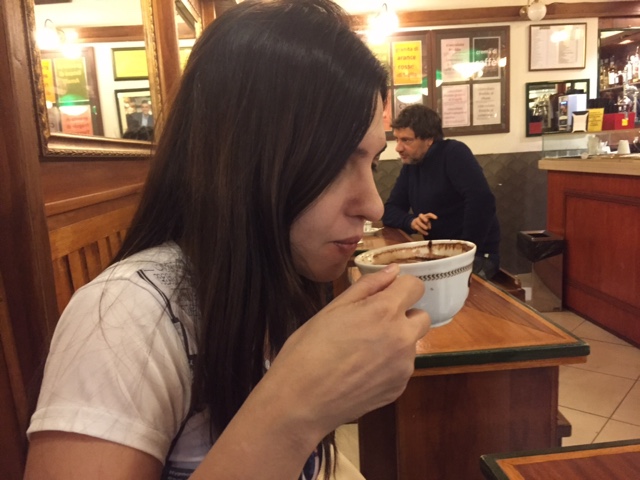 At night we went to another place recommended by Rosa and again next to the hotel. The is called Osteria Centouno or 101. The pace looked more modern and younger than Rogno or L Aquila from yesterday. In fact the grandpa from L Aquila saw us and waved out to us earlier in the evening.
The staff at Centouno is young, friendly, competent, gets your food together like in the other places here and unlike in Mumbai. Unlike the staff in Rogno, doesn't give you bread and charge you for it, or try to push orders down your throat. This restaurant was packed too and we got the last empty table. The vibe was nice and made us smile. Some folks, not us, seemed to get a complimentary bottle of limoncello at the end. 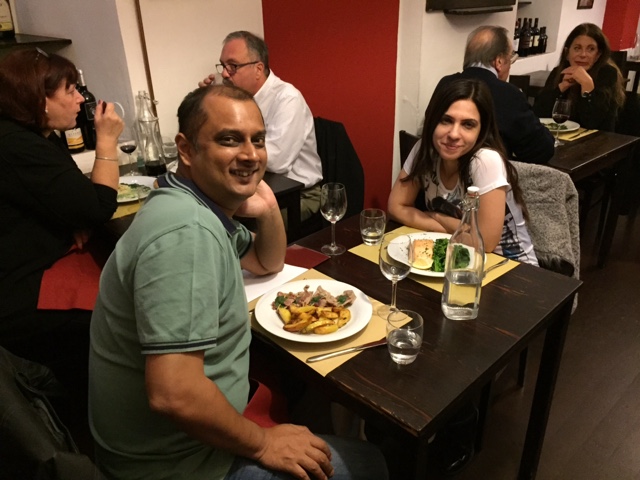 K made a healthy choice had a well seasoned and very juicy grilled salmon which seemed quite fresh. As per her request they gave her spinach instead of salad. 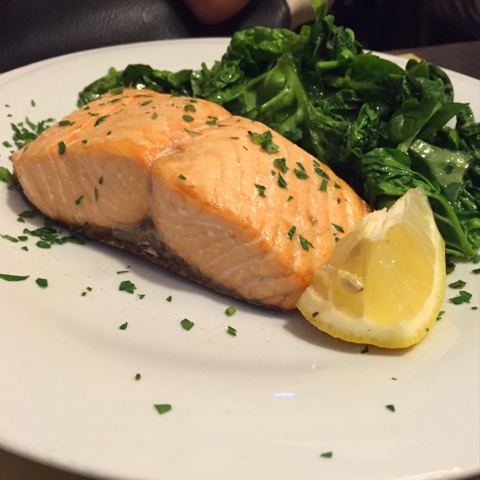 On the friendly waiter's suggestion I had a Roman dish called Saltimbocca. Beef and ham grilled together with sage which added a great flavour. The meat was pretty succulent.
This dish, which would be politically incorrect in most of India, is served with lovely Rosemary potatoes in Rome. 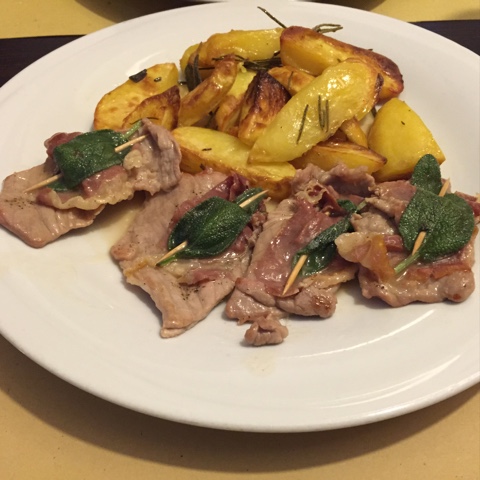 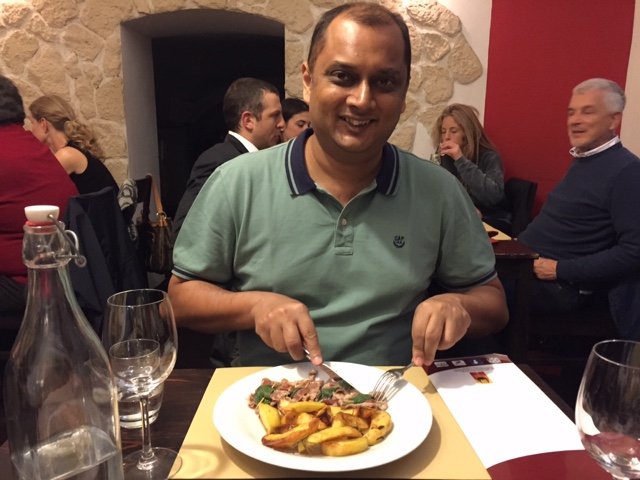 We skipped dessert, didn't drink alcohol and yet our bill came to 28 euros. It's a long trip and we have to score a few cheaper meals though takeout sandwiches and McDonalds seem the only option for that.
On the way back to our room we caught Rosa at the counter just before she left the for the day and took a selfie with her.
We owe her the day's yumminess after all. 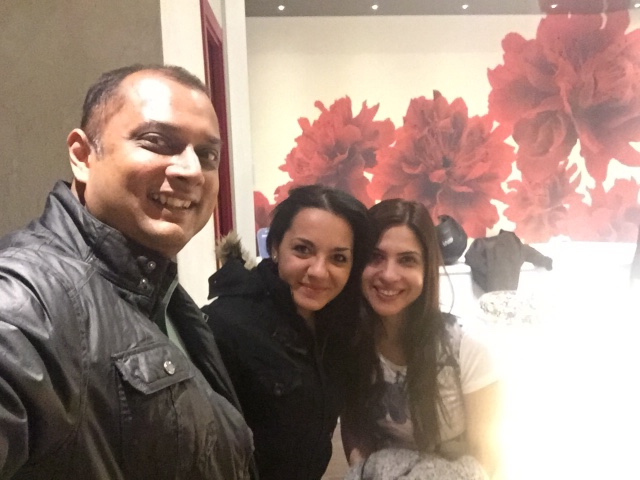 Update: we went back to Centouno on our last day in Rome. Monday night for dinner. It was very different. It was empty barring one noisy family with wailing babies. Then waiter and the waitress there that evening didn't speak English at all and  it was very difficult to community. I wasn't very excited by the grilled pork loin that I had but I must admit I was a bit out off that evening though K liked her salted cod.
Europe Faraway foods iPhone 6 pics Italy Rome travel