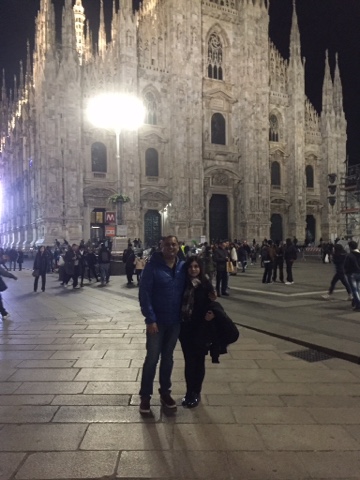 At the duomo at Milan

It was our anniversary yesterday. 14 years!

At one point we wondered whether we should have spent the day in Florence rather than in transit. Our mood became more despondent when we checked into our hotel NH Fiero Milan. Not the best feeling on a special day.

We are at Milan to attend the Host Milano conference where I am the India Host Ambassador. The last time I was in Milan I was 6 months old!

Host Milano is a huge international food and hospitality exhibition and conference. The conference is being held at the Fiero Milano beside Milan Expo which is very far from the city.

The hotel and the room are pretty nice and modern but there is nothing near it and we had an over-priced and underwhelming lunch at the hotel restaurant after we reached as there were no other options. Not befitting of an anniversary lunch.

We later realised that eating out in Milan in a restaurant is more expensive than in Rome or in Florence.

We fell asleep after checking in and woke up around 7 pm and decided to head out to the Duomo. It was pretty easy to reach using the Metro though the metro is quite a walk from the NH hotel. The metro cost 2.5 euro each. In retrospect I would advise staying in a hotel in Milan centre even if you have work at the expo as the Duomo us where all the action is and the expo area is a figurative desert. At the end of the day you would have to go to the Duomo to eat. The other option is to go to the nearby town of Rho but that's a 20 euro cab ride each way.

Our spirits lifted when we reached the Duomo. The duomo in Milan is a classical cathedral and looks very different from the duomo in Florence. The area is pretty magical with lots of restaurant and posh shops (think Prado and Gucci) around. We went into a cafe for a cappuccino and some cannolis. k said we should sit and have our coffee even if they charge extra for sitting. 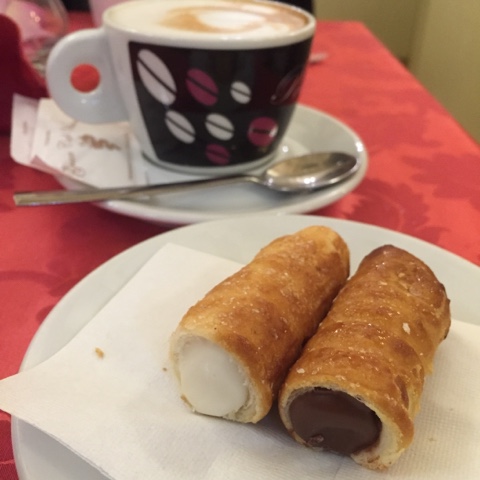 We then headed out in search of Osteria Pizzeria Stendhal, a restaurant recommended by Jonaki, my college mate. She is a Bengali married to an Italian chef, Matt who is now the head chef at Mezzo Mezzo in JW Marriott Juhu.

Stendhal is a bit of a walk from Duomo. Needed GPS to guide us. Luckily the roads were lively including at past 11 when we returned to take the train back.

We were so glad we decided to chug on and go to Stendhal despite the walk. The atmosphere and the service there were both very warm, had a neighbourhood inn feel to it, and we were lucky to get a table. 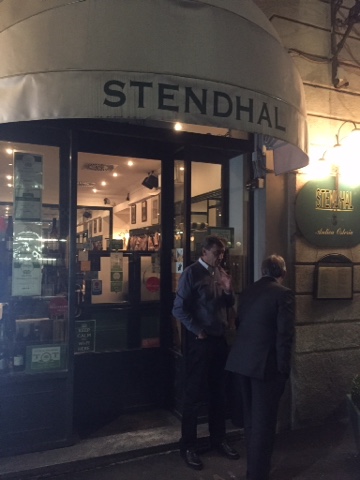 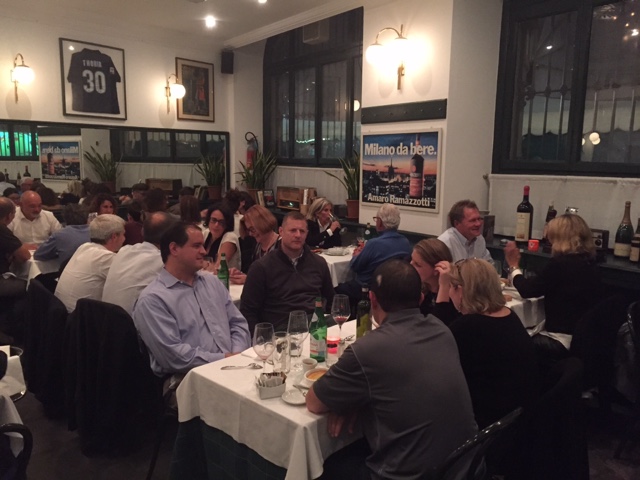 The meal was pricey. 52 euros for 2 mains and water but was pretty spectacular.

I ordered the famous Milanese veal osso bucco, with a flavourful sauce, which used a veal marrow bone and which was served with a creamy (different from that in Cesare in Rome) saffron risotto. The meat was very tender and the sauce packed punch. I got a bit of delectable marrow too. This was Italian food at its most majestic. 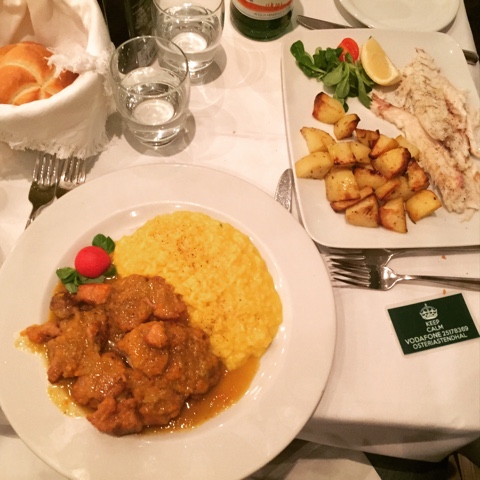 K had grilled sea bass. Like in Ragno in Rome, they got the the entire fish, showed it to us, and then filleted it and got it back. The fish was juicy and fresh and each bite was loaded with great taste and gave lots of pleasure and competition to the delightfully cooked veal of the osso bucco. 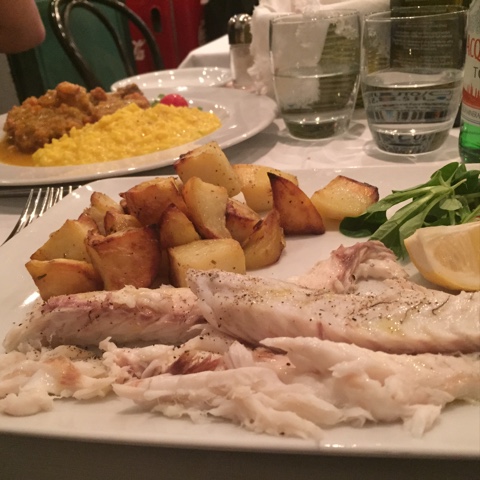 The walk around the duomo and the dinner at Stendhal finally made the anniversary a day to remember. 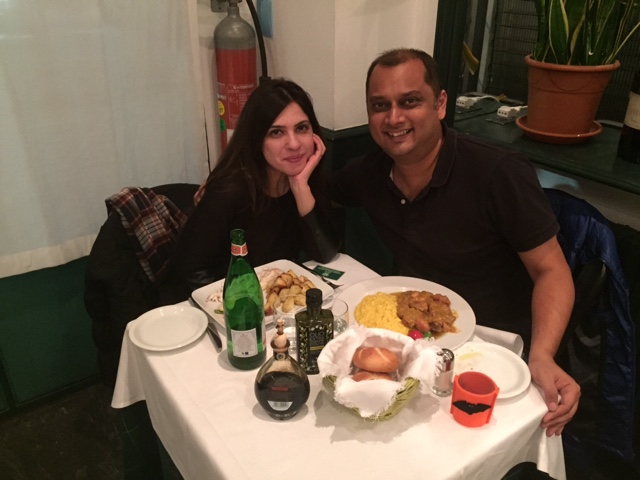 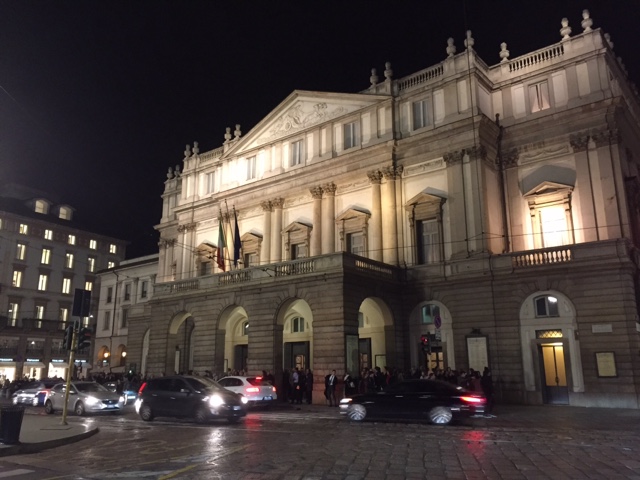 We got a metro back and even a bus from the station to the hotel.

Woke up this morning to clipping from home of Rashmi Uday Singh's review today which made K and me a Bombay Times couple.

To add to that there was a MTV concert going on at the Duomo when we went there the next day where we had a dinner of a pretty inspiring and flavoursome duck ravioli and an under-seasoned, soggy porcini risotto at Papa Francesco.

A big thanks to all who have wished us and here's  wishing you all a Shubho Bijoya. 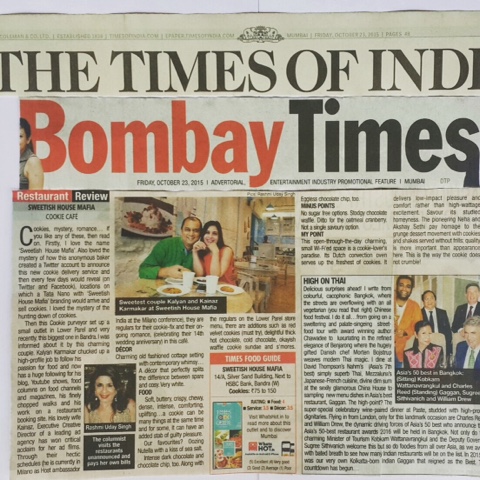 Sheikha said…
Just read the article. Happy Anniversary! Wishing you many more years of (happy) togetherness.
Looking forward to read about the rest of the trip.
25 October 2015 at 21:15

SC said…
Happy Anniversary to Kainaz and you, Kalyanda! May the two of you always continue to enjoy great times together :)