Why should I eat pasta in Delhi if I didn't eat rajma in Rome?

on November 22, 2015
I got to back to Mumbai, from a short trip to Delhi, last night.
This was one of those trips where we set off from Mumbai at the crack of dawn (very rare for me) and spent most of two days sequestered in an office conference room before being packed off back to Mumbai. Which is why I couldn't meet anyone, though a lot of you from Delhi had most kindly reached out to me. Next time hopefully.
I did manage to snatch a few good bites in this short trip too. Delhi after all has so much good food on offer. I know that the Delhi food scene is quite frenetic and there is a lot of variety here including in international cuisine. However, my focus when I come to Delhi is always first on the local North Indian food. If I did not have rajma in Rome then pasta will not be my first choice in Delhi. I am sure Delhi-ites would appreciate the break from their native food that international joints offer, but as a tourist/ visitor I want to get a taste of local flavours when in Delhi which I will not get in Mumbai. I have a simple strategy when in Delhi, 'go for the North Indian food'.
We landed in Delhi at around 8.30 am the day before and wanted to have a taste of the local fare before we headed to our destination at Hauz Khas.
I tweeted and asked for suggestions on Facebook too hoping that someone would be online at that early hour.
I got answers. Food writer Marryam Reshii suggested Elma, which is a posh bakery at Hauz Khas Village. We didn't have that much time though and Elma opens at 10 am which was the time by which we had to report. Someone suggested J W Marriott. Dude, that's not my idea of a 'local Delhi breakfast'! There was a suggestion for Chaayos but they have recently opened an outlet at Bandra which I was planning to try ( we went there this evening. Not our sort of place and the food sucked. Service was good).
Then food blogger and photographer, Rekha Kakkar, suggested the local sweet shop Evergreen or a place called Adyar at Green Park market. We headed Green Park near Hauz Khad and made our cabs wait while we grabbed a bite.
Adyar is a South Indian place and going there didn't make sense to me in the heart of North India so we went to Evergreen instead.
Evergreen is a sweet shop, established in 1963 according to the signage. They sell sweets on the ground floor and have a vegetarian restaurant on the first floor. The place looked pretty sterile and empty at 9.30 am. The service was smart and with a smile. The place is air-conditioned. 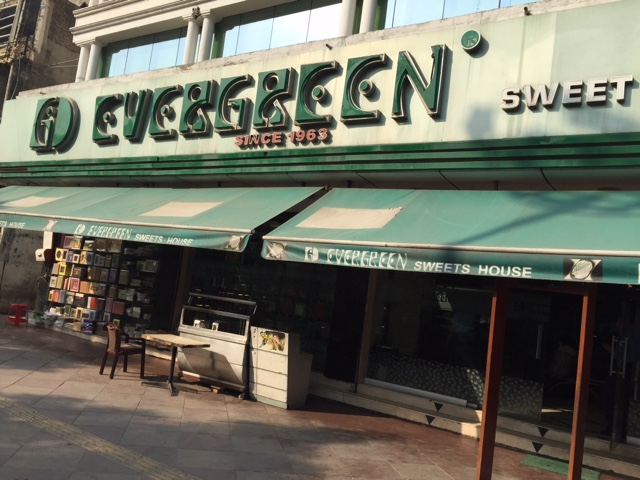 You had the Punjabi breakfast dish, chhole bhatoore on offer and South Indian dosas too. I naturally chose the former for our group and some lassi for myself while the others tried tea and some had cold coffee.
The bhatoores (chubby flour based flat bread) were freshly fried and hot and combined well with chhole (chickpeas) where the curry was pleasantly spiced but yet not so heaty that it challenged you in the morning. Just the welcome you wanted when you landed early in the morning in a city. 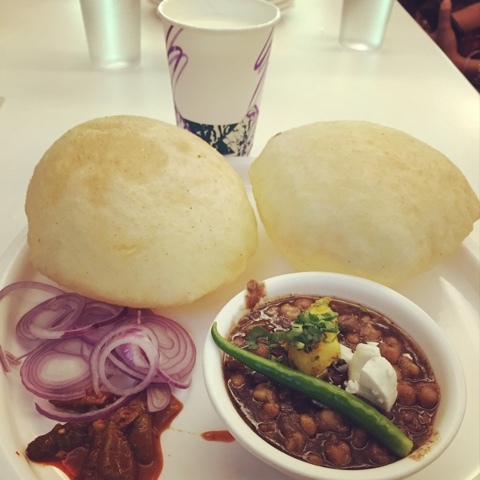 Chhole Bhatoore at Evergreen
My brother, who lives in Gurgaon, often eats chhole bhatoores when out on work. He gave an expert look at the picture of the bhatoore I had later put on Facebook. His verdict was that the bhatoore looked nice and fresh unlike the yellowed, slightly rancid, bhatoores often served to him in Delhi sweet shops.
The lassi was sweet, ice cold and pretty thick too unlike the light and frothy lassies that I had in Punjab, the home of lassis, last year.
Our purpose was served at Evergreen. We were well fed and happy and ready for our workshop. 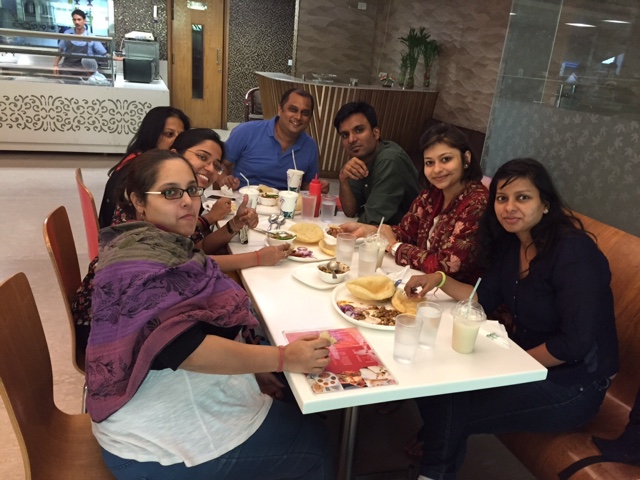 While lassies are fine, I do need my cappuccino in the morning and I got that at the Costa Coffee next to Evergreen. What was nice was they have employed deaf and mute folks at the coffee shop and you have to write your order and give them to the staff. A nice initiative by Costa to give employment and purpose to those who are physically challenged.
I stayed with my brother and sister in law at night as they would not have it otherwise. They live in Gurgaon. I took the Metro from Hauz Khas to IFFCO Chowk in Gurgaon.
The metro, as people promised me, wasn't too crowded when going to Gurgaon at that hour (8.45 pm) though one had to stand. I was bemused to see people sitting on the floor of the train watching movies on their mobiles. Some looked like blue collar workers. Unni from the Delhi office of the market research company I consult at gave me his metro pass so that I wouldn't have to stand in the queue. Delhi folks are pretty big hearted.
There was a chaatwala outside Hauz Khas station and I decided to have a bite before taking the train. I wasn't sure if his golgappa would be hygienic, specially the water, so I went for an alu tikki as they fried it in front of me.
The alu tikki (flat potato cutlet) wasn't just that as they added a crushed kachori, curd, masalas and tamarind chutney to it too.
The taste was heady and it tantalised the palate and reinforced the general belief that Delhi offers the best India has to offer in chats.
The stall seemed pretty popular and the hot and tangy tikki was perfect in the chilly evening.
The tikki made me burpy though, perhaps the oil wasn't too good. 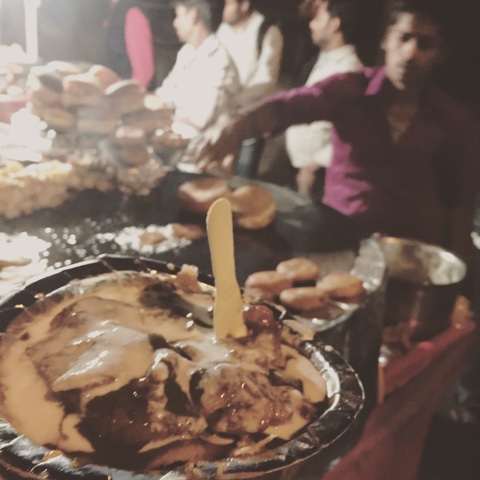 Gurgaon
My brother had suggested a place called Pasta Bowl  in Gurgaon for dinner but I wasn't too keen to have pasta in Delhi and that too so soon after Italy. So he took me to a place called Coriander Leaf.
It is a pretty looking restaurant where all the walls are made with glass. The place looked really beautiful with its yellow lights at night, almost like a jewel.
Coriander Leaf offers Indian food and Pakistani too!
We reached at 9.30 pm and the maitre d told us there was a 45 minute wait, but tables suddenly opened up and we didn't have to wait.
We started with patthar ke kebab which is an underrated dish kebab from Hyderabad. The dish consists of goat meat kebabs cooked on a hot stone (patthar) to a point of divine tenderness. Somehow it has not got the fame that shammi kebabs or even galauti and kakori kebabs have but definitely deserves kebab stardom.
I first had patthar ke kebab at the now shut Golconda Bowl when it was open at Bandra. It's now at Juhu and I have heard mixed reports about this outlet. The original is in HKV in Delhi.
The patthar ka kebab at Coriander Leaf was delightfully moist and meaty and delicately spiced. A sheer work of art. My brother had this dish for the first time that night and loved it. 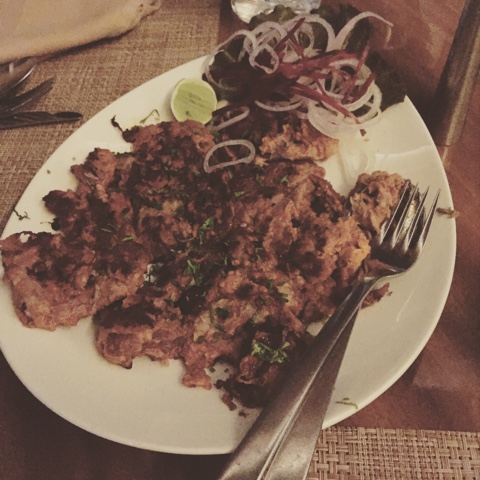 I believe that you get much better mutton or goat meat in Delhi than in Mumbai. The main course that we ordered, Rawalpindi bhuna gosht from Pakistan, bore this out. The mutton was robust and yet poetically succulent and the curry was pretty nuanced and well flavoured too. Went very well with the roomali rotis that I had with it. This was food at its most wholesome, shorn of any pretences. 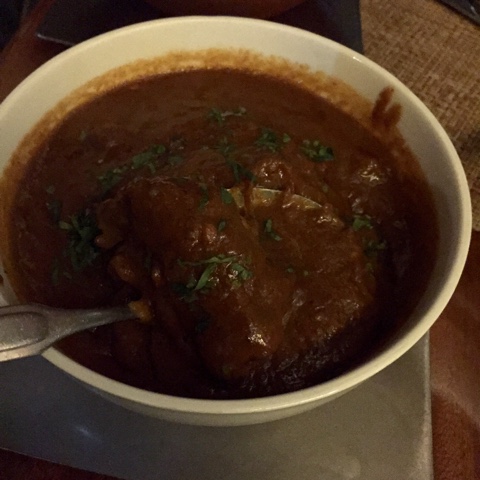 My sister in law ordered an Amber chicken biryani which, predictably, didn't excite us Bengalis as we found the spices too heavy for our definition of a biryani. 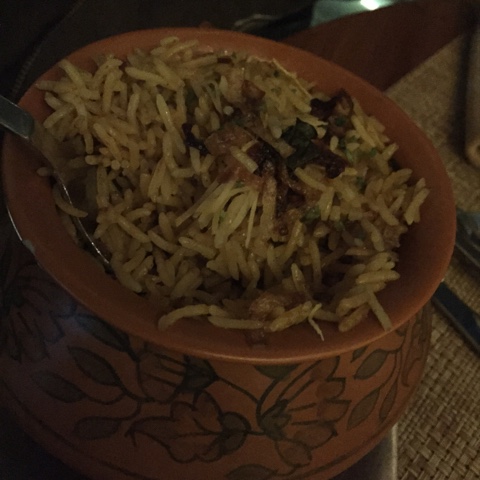 Ironically the folks at the next table in this Indo Pakistani restaurant at Gurgaon were Bengali too which meant that Bengali was the only language to be heard at our side of the restaurant that night. 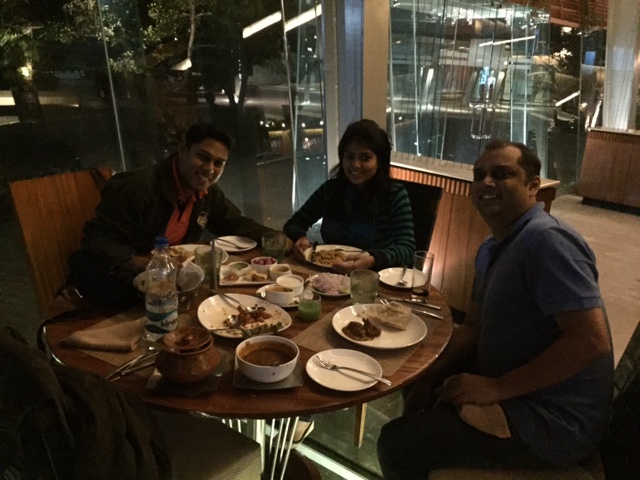 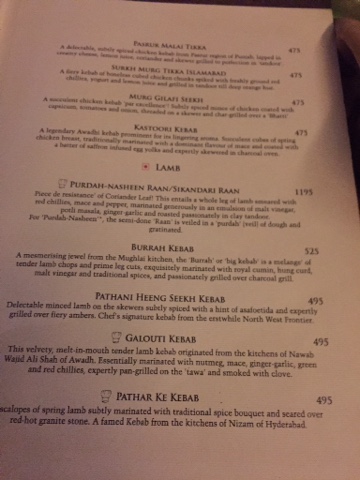 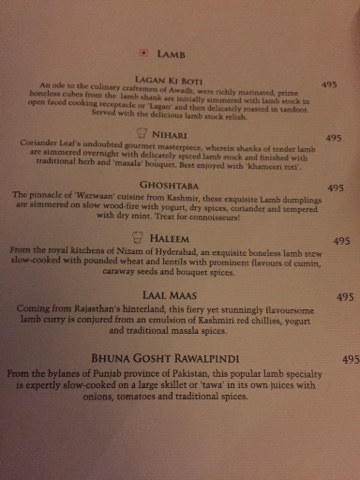 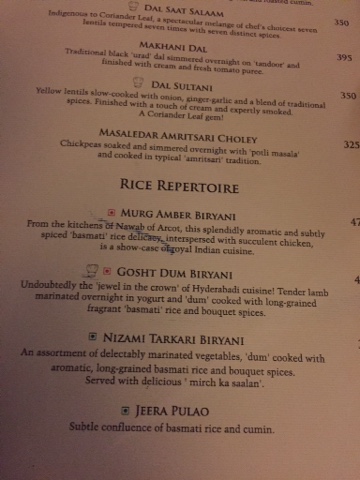 After I had a good night's sleep, the little ones sent me back to Delhi (I took an uber this time) the next morning with the best breakfast I could have had at Gurgaon. 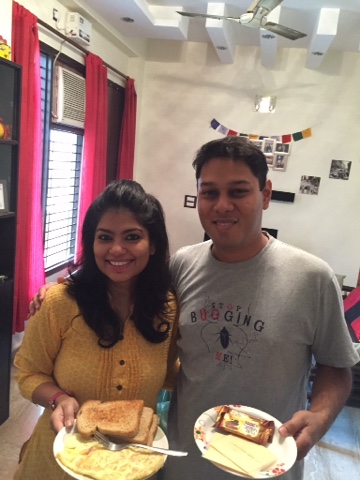 Buls said…
Do try pasta bowl company next time. It is a really nice Italian place which serves very fresh food.
22 November 2015 at 07:07

Roxanne Bamboat said…
You're absolutely right. Stick to local foods instead of trying to be adventurous. I too would have just eaten North Indian food and certainly not a pasta or dosa. Coriander Leaf sounds interesting though.
22 November 2015 at 10:22