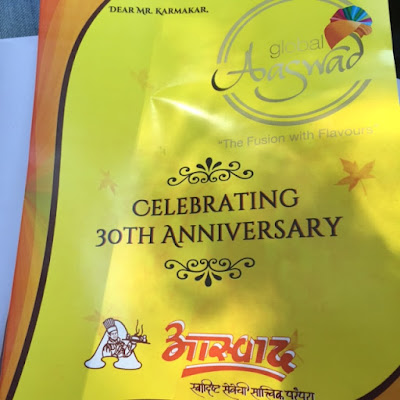 Aaswad turned 30 yesterday.
Aaswad is a small, air-conditioned vegetarian Maharashtrian restaurant at Shivaji Park in Mumbai, located diagonally opposite the Shiv Sena Bhavan.
It was founded 30 years back by Mr Srikrishna Sarjoshi who wanted to open a restaurant where people could try out traditional Maharashtrian vegetarian dishes in a hygienic environment. Over the years it became quite a popular place with families and is packed through the day. The queues became longer after they recently won Foodie Hub's best vegetarian dish in the world 2015 for their missal pav. This is now the most ordered dish at Aaswad.
They also have a sweet shop and the restaurant is now run by Mr Sarjoshi's son, Suryakant Sarjoshi. He has expanded the business recently and has opened a branch at Ghatkopat and has plans to open more branches. Most of the recipes here come out of his kitchen at home, with his mother and his wife cooking them first before they are introduced into the restaurant.
Uncle J got in touch with me a month back and said we must go to Aaswad on its birthday. Which explains why I joined him along with K and my Parsi in laws for a Maharashtrian breakfast yesterday (3rd January 2016).
The restaurant was decorated for the birthday and diners were pleasantly surprised to get a peda and a flower for the occasion.
We binged on their award winning missal of course and on pohe ( I managed to get us the last plate left), puri bhaji and the favourite of the day, thali peeth.  J liked the coffee too though I picked up my cappuccino and before I went there. While I do like a good eggs benedict or a well made waffle, it was good to have a nice local breakfast yesterday morning. I would urge you to try it out too.
Maharashtrian food lovers in Dadar are divided into Aaswad and Prakash (an older restaurant down the road) camps. I like both and would urge you to try either if not both.
It was a happy occasion yesterday and the joy rubbed on to our table too. We met Mr Suryakant who was busy managing the crowds and their chef Tukaram.
We left for home smiling after a nice breakfast and a very reasonably priced one at that too.
As we headed home, I remembered my first visit to Aaswad and realized how my Aaswad interactions reflect my life in the city of Mumbai and my food discoveries here.
The first time I went to Aaswad was in the late 1990s when I was new to Bombay. We had gone to see a movie called "Haseena Maan Jayegi" in the theatre next door. There were a couple of vegetarian Tambram girls in our group who said they wanted us to try out a lovely new place that they had discovered.
Turned out this was Aaswad. I was crestfallen when I saw it was a vegetarian place. I used to live in a PG which was vegetarian and looked for meat when eating out in those days. Thankfully the movie later made us laugh and lifted my spirits.
I have no memory of my first meal at Aaswad except I think there was some kind of a semolina encrusted potato cutlet involved.
Years later I began food blogging and became more interested in trying out regional Indian food. I made friends through my blog and they often introduced me to interesting places. One of our friends I have made through my blog is blogger Sassy Fork, a Maharahstrian. She once took me to Aaswad and ordered dishes of her choice and I really enjoyed the experience. You can read about that breakfast here.
Since then I was sold on Aaswad. Would drop in there for a bite when I was around and would take people there during my food walks. Here's what happened on one of them.
Yesterday's meal with my family in Mumbai, and the friends I have made here, made me realize just how much I owe to the city of Mumbai and how well it has treated me. I am so grateful to the city and its people for welcoming me when I moved here a decade and a half back and for helping me build a life here and for making me feel at home.
There is no better way to start the year with a feeling of gratitude.
Anniversaries dadar Indian food iPhone 6 pics Maharashtrian food Mumbai highs mumbairestaurants vegetarian stuff