I wasn’t planning to blog about this dish but my friend Stuti Sinha, from the Taj Hotels Group, said I should. It was her birthday recently and you can’t say no to a birthday girl can you?

And when you read a tweet from someone asking for a story in today’s age of listicle thirstiness you do tend to rush to comply.

This post is about the pasta I made a couple of night's back for K. The last time I made a pasta before this, I came up with one of my three biggest kitchen disasters in years of cooking. That pasta tasted and looked like chewing gum (don’t ask) and we had to junk it!

So this was a night for redemption. I looked anxiously as K took her first bite of this time's pasta. Then she looked at me and said “This is very good. Love the flavour of chicken in every bite”.

Well I actually owed the legendary #BunkinBanu for that. Thankfully she bunked the previous day but not the day I made the pasta. When she called me at office that day, I requested her to boil the chicken legs from the fridge in salt and pepper and shred them and keep them in the fridge.

Matteo Arvonio, the Italian chef at JW Marriott Juhu’s Mezzo Mezzo, tells me that Italians eat chicken at home but not at fine dining restaurants. Well I was cooking at home so the chicken was not out of place.

I came back from my walk in the evening, had a shower and opened the fridge for the prep work Banu had done in the afternoon. Shredded chicken, washed fresh basil, chopped tomatoes and then a container with something jelly like!

I realized that Banu had left the chicken stock for me. I had not asked her to do so though.

Maybe she had learnt this at some other house where she works at. Or saw it on on TV.

She did tell me once that she saw me on TV where I judged Saransh Goila’s cooking on Food Food. She seemed happy that she was evidently not the only one whose cooking I critiqued!

A day later I asked her why she had kept it. She said "there was water left after boiling so I kept it".

Well I added some of the chicken stock to the pasta and that’s the secret of the taste which was a mélange of the flavours of chicken, seasoning of salt and pepper, freshness of basil, acidity of tomato and the promises of Italy purred by the parmesan that I grated in to the pasta.

All of which together in perfect symphony to make the missus happy.

Well Stuti, you heard the story. Here’s the recipe now.

1.     Add a tablespoon of extra virgin olive oil on a hot pan and then reduce the flame as EVOO shouldn’t be cooked on high heat
2.     Add a couple of cloves of garlic. I added half a teaspoon of garlic infused olive oil instead
3.     Add 3,4 leaves of fresh basil and 1 finely chopped medium sized tomatoes. Stir
4.     Once that cooks and the tomatoes become a bit soft, add the shredded boiled chicken and three tablespoons of chicken stock and stir for a minute
5.     Then add pre-boiled and drained pasta (the missus loves fusilli) and 3 tablespoons of the water in which the pasta was boiled.
6.     Add 1 teaspoon of table salt and stir for 1.5 minutes and you done
7.     Turn off the gas and add about 25 to 50 g of parmesan (Matteo says you can cling wrap the rest from the bar and keep it in a chiller), 3,4 fresh basil leaves, ½ teaspoon crushed pepper (ideally white, but I had black at home) and a sprinkling of sea- salt for the crunch. Add a tablespoon of extra virgin olive oil at the end

Gently stir it all in and you are done

PS: Soon after I put up pictures of the pasta on Facebook, my classmate from school Poli Gupta, recreated the pasta in her home in New Jersay and sent me a picture 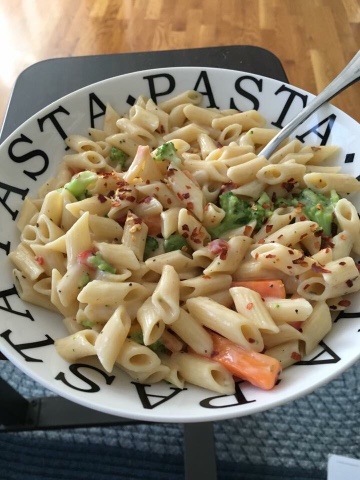 And today Stuti Sinha from Dubai

sent me these pictures today after I uploaded the post. She apparently changed her plans to make curry after reading the recipe and made the pasta instead. In her words,

'I've been eating directly out of the pan. This is so good!!😊😊 I followed your recipe to the T. Even used black pepper though we had white pepper at home. Your pasta looked exactly like the pasta I like. Non cheesy, white saucy and gluggy and now I've made it! 😄😄😄😄' 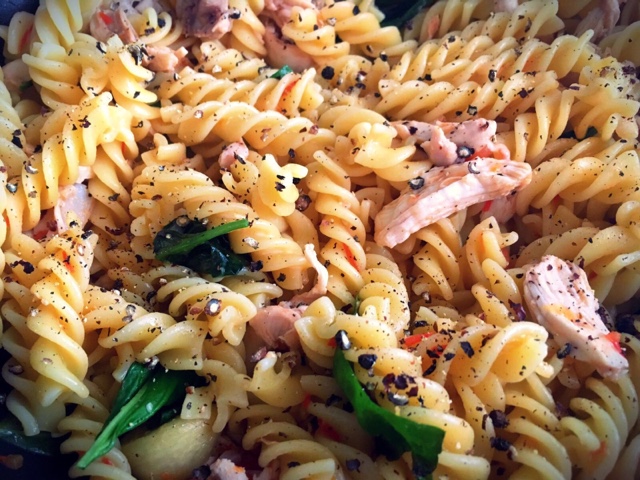 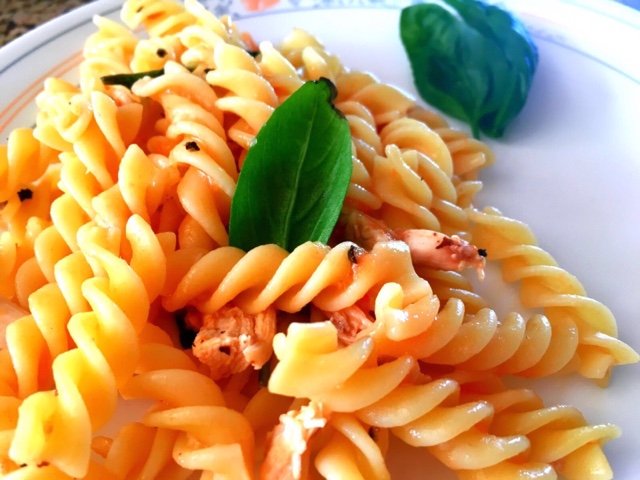 21 Feb: Somanda Sanyal made it too and shred it on Facebook. This must be one of the most instantly recreated recipes that I have shared 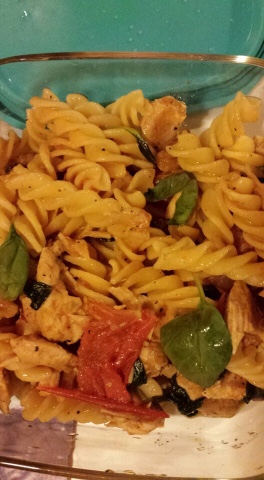 This the most gratifying part of blogging. All the smileys made me smile too - Kalyan
chicken iPhone 6 pics italian pasta People Recipes