Celebrating Gudi Padwa with missal at the Airport Aaswad 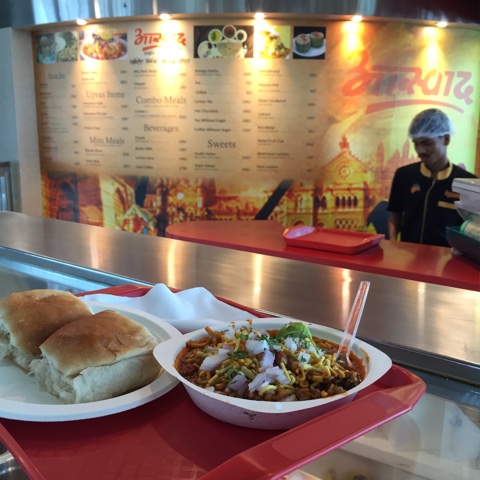 It's a special  and festive day across India today.

In Andhra Pradesh it is the festival of Ugadi. Navratri starts for the Punjabis. It's the Sindhi new year, Cheti Chand. And for the Maharashtrians it is new year too and it is called Gudi Padwa.

I am in Delhi right now where the folks at ITC Maurya have invited us for the weekend. We had a lovely meal of the raan, the burra kebabs and the legendary dal Bukhara at their restaurant Bukhara for lunch but this post is not about our food packed weekend at Delhi.

I wanted to tell you about the fantastic breakfast of the Maharashtrian favourite, missal pav, that I had this morning to celebrate Gudi Padwa.

We were at the spanking new T2 International Airport in Mumbai from which some domestic flights like Jet and Vistara operate.

We bought Theobroma brownies, our favourite brownies in the city, at the airport counter. We then stopped at Starbucks of cappuccinos where the young staff took a while to make the coffees as there was a quite a big crowd there.

I rushed out with my cappuccino before K's coffee was ready as I was on a mission. I was on the look out for the Aaswad counter at the airport which its owner, Suryakant Sarjoshi, told me had opened recently.

Aaswad in Dadar is one of my favourite Maharashtrian vegetarian restaurants.

Luckily (!) our Jet flight was delayed so I managed to stop at Aaswad and even did a Periscope and a Facebook video.

What did I order?

I had nominated the missal Pav at Aaswad for the Foodie Hub Awards in 2014 and it won the best vegetarian dish in the world.

The missal at the airport Aaswad tasted the same as the one in the town outlet. A tad spicier in fact. Cost Rs 170 here as against Rs 60 odd in town. The stall is near gate 49A in T2 from where the Jet domestic flights leave. They have a full array of Maharashtrian dishes here.

I think that the opening of  the Aaswad counter at the T2 airport is a significant step for the spread of Marathi food. Maharashtrian restaurants in Mumbai are currently confined to Marathi dominated pockets such as Dadar, Girgaon and Bandra East. Which is why a lot of non-Maharashtrians haven't tried out the cuisine. I hadn't too, till Marathi friends took me to these restaurants though I had lived in Mumbai for a decade by then.

Aaswad's being located at the airport means that a more cosmopolitan and international crowd will be able to try out Maharashtrian food at which is great for propagating the popularity of regional Indian food.

So when at the Mumbai T2 airport do spare some time out from the global fburger and pizza joints there and go to Aaswad and try out some local Maharashtrian food from Mumbai.

Check the video I shot at Aaswad

Finally, what is missal you ask?

It's a pulses and moth beans based spicy and flavoursome Maharashtrian lentil curry topped with crunchy farsan/ namkeen or fried gram flour based snack. Offers a beautiful contrast of textures and flavours and is now had with pav or the soft buns that the Portuguese had introduced to Mumbai centuries back.

Here's wishing you all a happy Gudi Padwa! 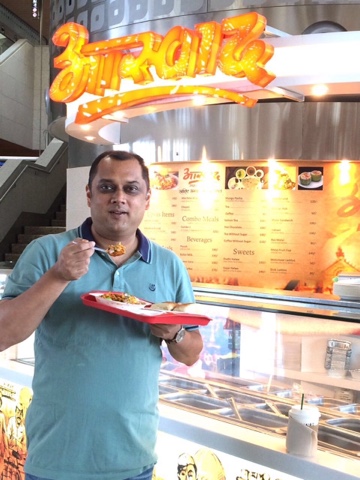