There is nothing more exciting in life than trying out new things. To keep reinventing oneself and moving on.

That's what happened last weekend when I conducted my first cooking demo in front of a live audience. That too on light and summer vegetarian recipes.

I am no chef. I have not been to cooking school. I have not cooked for paying customers,for my family and friends at the most. I taught myself how to cook after I got married when I was broke after a year of dating before we got married. Going out to eat was not an option then. I learnt my cooking by calling my granny and mom in Calcutta and by downloading recipes from the world wide web in the pre-blogging era. As my comfort with the kitchen grew, I preferred to experiment with what was at home and come up with quick recipes. I rarely followed cook books.

So you can imagine that it was quite a challenge when the folks at Star Bazaar (a retail chain formed in partnership between Tata & Tesco) invited me to a conduct a workshop for the Star Food Studio at the Korum Mall. The mall is Thane, a satellite town of Mumbai that I a rarely visit as it is far from home. 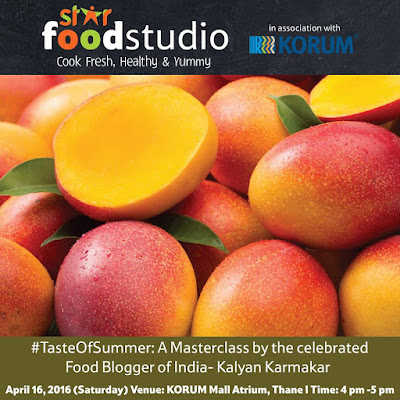 I was given a list of ingredients within with I had to think of recipes to present at the workshop. As we were doing them at the Mall amphitheater, they had to be vegetarian apart from being light and healthy.

Quite the challenge for someone known for his kosha mangsho (goat meat) and bacon Hakka Noodles among his friends!

I had never cooked in front of a live audience before. Till recently I would prefer to be alone in the kitchen when I cooked.

I took up the challenge inspired by the words of Dr Daisaku Ikeda, president of the Soka Gakkai International, a lay Buddhist organisation devoted to world peace who says:

“Rise to the challenges that life presents you. You can't develop genuine character and ability by sidestepping adversity and struggle.”

I came up with recipe ideas for the #TasteOfSummer workshop and bounced them off the Star Bazaar team who then put things in place for the event on Saturday.

I had a ball at the event to be honest as we had a lovely audience of food loving folks from across age groups (including tiny tots), women and a few men too. We got got together and came up with some pretty light food which was quick to put together and where taste was key.

Since Korum Mall is doing a test run of the Reliance Jio network and offers free wifi, we broadcast the event live on Finely Chopped on Periscope (please follow me here for live broadcasts) and K and my mom in law watched it from Bandra!

I went for my evening walk at Almeida Park after returning from the workshop much to K's surprise who thought I would be too exhausted to do so.

But why would I be exhausted? The roads from Bandra to Thane are so unbelievably smooth. I took an Ola one way and Uber another and slept in the cab both times. All the prep work for the workshop was done by Elina Mohanty and Kaustabh of Star Bazaar with the help of the kitchen staff of the cavernous Star Bazaar store at Korum Mall. Everything was cut, chopped, peeled and placed in trays according to the recipes before I arrived. For the workshop I called people from the audience who did the cooking. So basically I had a whole lot of fun and didn't have to really exert myself.

How can that tire one?

Here is the link to the very beautiful pictures, taken by my friend Alka Keswani who writes the blog Sindhi Rasoi, which will give you an idea of what happened at the event.

And here are the #TasteofSummer recipes.