We made sudden plans this afternoon and headed to Oh Calcutta at Khar for a very late Poila Boishakh (Bengali new year) lunch in Mumbai.

The service was expectedly slow as the restaurant was still crowded at 3 pm and I finally had to go and drag someone to take my order. To be honest, everything goes on a Bengali restaurant on the Bengali new year just as it would on a Chinese restaurant (as K pointed out) on the Parsi new year. You take the Fawlty Towers feel in the spirit of the day.

There was no buffet or set menu so we had to order from the a la carte menu. We prefer this as we can choose what we prefer to eat and focus on that rather than a huge array of items. 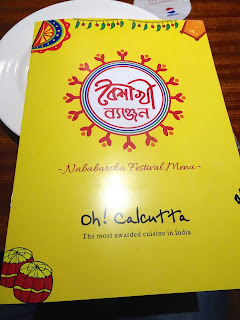 I was suitably impressed with what we ate once the food arrived. We started with luchi and chholar dal. This was first Bengali dish that I had actually liked when I came to India as a kid from the UK. I had been brought up on European food till then you see. Then Didu, my granny, won my heart over with the luchi (fried refined flour flat breads) and chholar daal that she made when we visted her in Delhi in 1978.

I remember being served cold luchi (blasphemy) the first time I had come to Oh Calcutta at Khar. This time the luchis were served pleasantly hot. The dal had the right balance of tart, sweet and salt. The luchi and chhalar dal made for an excellent start for our lunch at Oh Calcutta today.

For our mains, K and I shared an alu jhinge posto. The iconic Bengali dish where potatoes are cooked with crushed poppy seeds. Poppy seeds or posto are pretty expensive which prevents alu posto from becoming an every day dish. I never liked the version they used to serve at Oh Calcutta Tardeo when we used to go there earlier. Their kosha mangsho, fish fry, luchi chholar dal was much better.

Today, K and I (she loves alu posto) were very happy the alu posto at Oh Calcutta, Khar. It was served hot. The flavours, subtle and yet with a point of view and the dish was so tasty. You could get the faint kick of (possibly) mustard oil and chilli. The posto (poppy) paste was indulgent and made you somnabulent and a nice dupurer ghoom (afternoon nap) followed when I returned.

The bite of jhinge (ridge gourd) added to the textural contrast to the alu posto. 'Jhinge' is different from 'jhinga' and the latter means prawns in Mumbai. There was a table of non-Bengalis beside us who had ordered the jhinge alu posto and were wondering where the prawns (jhinga) were!

I combined this with the short grained Gobindobhog rice which we Bengalis eat in festive occasions as against the basmati that Punjabis adore. The rice wasn't as fragrant as it should have been today and they should have served some ghee.

I chose fish over mutton (goat meat) and managed to get the last rui (rohu/ carp) peti piece. The peti is the stomach/ belly of the fish and is coveted as it is fatty, tasty and has fewer fish bones.

I had the doi machh where the fish is cooked in a yogurt (doi) based sauce. The sauce at Oh Calcutta looked darker than other doi maache's that I have had. By now I have matured enough to know that there is no one way to prepare Bengali dishes and that every house adds their own twist. The sauce was rich and tangy and combined well with the kaju and kishmish pulao that I had decided to indulge myself with.

The meal came to about Rs 1,900 with service charge which is pricier than other Bengali joints in town barring the 5 star 25 parganas. The service could have been better. They switched off the aircon as the restaurant had emptied while we waited for our Ola cab, which never arrived, after lunch. I got them to switch it on finally. The service ranged from being a bit a tardy at times to friendly when the food was being served. The food today was much better than what I had had in my last Oh Calcutta meals which was good. I was happy to see this come back. Oh Calcutta restaurants are the only standalone Bengali restaurants in Mumbai with clean washrooms. Other places are a lot cheaper but with no loos or nightmarish loos.

Do catch this video that we shot during lunch

Some of our earlier Bengali new year celebrations would always be at Oh Calcutta, tardeo and once with office folks at Andheri. So this lunch was a bit nostalgic.

I began to appreciate, and then miss, Bengali food only after I came to Mumbai in the late 1990s. The only options for eating out then was the (now shut) Hotel New Bengal canteen and Only Fish which then became Oh Calcutta.

My first attempt to introduce K to Bengali food happened there and I later had many happy dinners at the Tardeo Oh Calcutta with her and my in laws, Parsis who learnt to love Bengali food.

Many Bengali places have came up since then in Mumbai. All are a lot smaller and humbler than the Oh Calcutta branches. There was Calcutta Club at Oshiwara which does some nice home styled food. Kolkata wedding catering legends Bijoli Grill at Powai. Bong Bong at Bandra. Then there was Bhojohori Manna, which started at Oshiwara, and now has spread to Powai at Chembur. There are our favourite Bengali restaurant and the folks there have adopted us as family and really spoil us with some lovely ghoroa (home-like) food. As does Amit Roy of Peetuk Caterers who often gets me some coveted Calcutta biryani from his kitchen.

We are now going to a dinner at our friend, Soumik's house where Amit is catering the dinner today.

Somewhere down the line we figured out shops for panch phoron and posto (Vijay Stores at Pali market) and fresh water fish (Poonam and Sangeeta's at Khar station market) and we often cook Bengali food at home and I have taught our cook, Banu, to cook it too.

I can't honestly say that I was ever lonely after I left home in Calcutta to come to Bombay.

The welcome here was so warm right from the start, the love so abundant, that today I am a Bengali who is fully at home in Mumbai.

Have a delicious year and may you grab happiness with both hands.