If you follow my social media updates then it would be no secret to you that we are besotted by the dark chocolate macarons from Pooja Dhingra’s Le 15 Patisserie in Mumbai.

The crunch of the almond meringue casing of this French dessert  at Le 15 is just perfect. Not too chewy. Not too limp or dense. The chocolate filling is intense and yet not overwhelming. Not overtly sweet. Not bitter. We have had macarons from across the world - France, Italy, Australia, Prague, Dubai, Mumbai - the Le 15 ones match the best that we have had.

An Italian lady in a macaron shop in Venice that we went to claimed that the French stole the recipe from the Italians. She pronounced it 'maa-karooni'.

While macarons are available all across Mumbai now, one could credit Pooja with making them popular among the city’s dessert lovers. She makes a range of macarons. Flavours such as salted caramel are popular. There is a paan flavoured one to give an Indian touch. And after her recent Japan trip, a macha flavour too.

Do watch: My Interview with Pooja Dhingra

Pooja has probably tried to break out of her ‘Macaron Queen’ image of late. Her first book has a picture of a red velvet cupcake and not macarons. I have tried the cupcake and it tastes really good. As do some of the brownies and other desserts that she has introduced. Le 14 Cafe serves plated desserts too from what I read on reviews on the cafe.

Yet, we keep coming back to dark chocolate macarons at Le 15 Patisserie.

Macarons (surprise, surprise) arewhat we had when we went to Pooja’s newly opened La 15 café at Colaba a month or so back . We had had dinner at Ling’s Pavilion and then went to the café for desserts and promptly ordered 6 dark chocolate macarons. 4 for K and 2 for me.

What struck us about the café was how beautifully it has been designed. It looks like a pretty painting. The way one would imagine a café in France to look. Every nook and corner of the café, from the high ceilings to the picturesque windows right down to the flooring, has been tastefully done in a very European sense. The design of the café brings in every bit of the poetic design sensibilities that one has earlier seen a glimpse of in the Le 15 Patisserie packaging in the past. It could proudly match shoulders with the aristocratic Sea Lounge at the Taj Mahal Palace next door and is yet less intimidating.

Our first visit the Le 15 Cafe left me hungry for more and I wanted to go back there for breakfast, especially the savoury waffles whose pictures I saw splashed across social media. Le 15 Café goes beyond the desserts and pastry that Pooja is known for. It has savoury items too which have been put up by her Hungarian friend from her culinary school days, Pablo Agular. Pablo was there on both occasions and seems to be fairly hands on.

We finally made it to Colaba from Bandra last weekend at about 12 noon. Late for breakfast? Well, reaching at noon was not a bad idea as I wanted to try the waffles and sandwiches and the menu seemed to indicate that these are available post 11.30 am. Before that you get eggs and stuff.

We entered the café, got a table by one of the pretty windows and straight away ordered for dark chocolate macarons. 1 for me. 3 for K. And cappuccinos. In a take a way cup for her. We waited for the order and took in the beauty of the cafe around us. Definitely a feel good place. 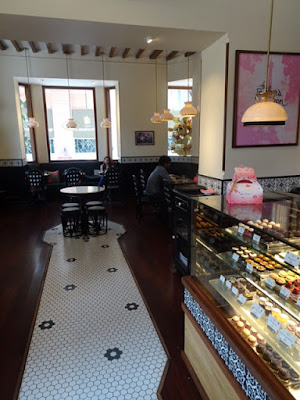 The dark chocolate macarons were as great as they always are and made for a wonderful start to the day. We were both impressed by the quality of coffee in the cappuccinos. And the beautiful crockery. Mine was in an elegant white porcelain cup and saucer. K’s takeaway cup was pink with pretty lettering.

We both simultaneously put up 'good morning' updates on Facebook 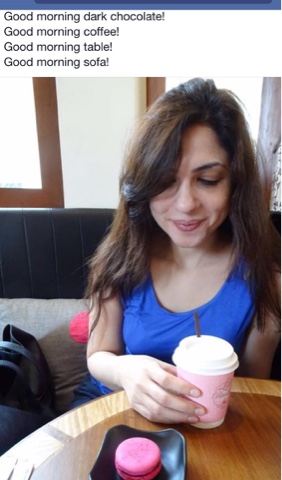 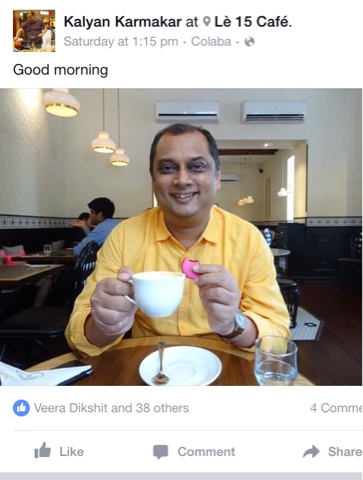 I ordered the parmesan waffles with tomato and poached eggs. Not my sort of dish as the taste was dominated by that of the tomato and I don’t like tomato based dishes. Not even in pastas. Also would have preferred the waffles to be crispier.

Pooja later told me that the waffle is meant to be crisper.

I ordered the spicy raclette potato chilli sandwich that I had seen Pooja post on Instagram sometime back.

Thanks to Out of The Blue and (the now shut) Starters and More introducing them in the late 1990s in Mumbai, all of us in Mumbai knew of the Swedish melted cheese classic, fondue, before the turn of the century. I hadn't heard of the other Swedish Cheese favourite, raclette, till I came across it in a sheep fair while walking down the hills of Zermatt in Switzerland. The raclette, which I had come across for the first time that day, was being sold a in a stall in the fair. They grilled/ roasted the cheese and scraped it onto your plates and served it with boiled potatoes and pickled onions and gherkins. The trick was to eat the melted cheese while it solidified. Since then I became a raclette fan and ordered it in every restaurant I went to in the rest if my trip. I even got some raclette cheese home and made it in Mumbai. We learnt in the trip that while tourists try fondues through the year, the Swiss have it only during winter!

The raclette sandwich at Le 15 Café has sliced boiled potatoes sandwiched in crisp toasted bread ( bread from Baker’s Dozen according to a sign at the shop) with a layer of melted cheese stretched across the top. It was served with a nice salad that help cut the taste of the cheese and balanced its heaviness. The cheese at Le 15 Café was pretty superb and brought back memories of our raclette at Zermatt.

It also (!) reminded us of the raste ka (road side) cheese chilli toast (Rs 8 then I think in 2000) that  K  and I would pick up from the sandwich guy at Nariman Point before going up to the office were we worked.

The menu at Le 15 Cafe described the sandwich as 'spicy'. I did see a few specks of green chilli but the Colombian chef's idea of spicy is probably pretty tame by Indian standards.

I had heard good things about the hot chocolate at Le 15 Café on social media. As it was rather hot outside, I went for a cold chocolate instead. The drink was frothy and the chocolate hit was intense. It was chilled just right and perfect before stepping out into the heat outside. Just wish the drink was a tad thicker.

We left after an hour happily spent at Le 15 Café to Uncle J’s house where he had organized a puri bhaji party!

We know that we will be back though. The prettiness of Le 15 Café is alluring and bewitching and the coffee and dark chocolate macarons have us in our spell.

A phone video that we shot at Le 15 Cafe

Note: The visits were anonymous and unannounced. Two cappuccinos, 4 macarons, 1 cold coffee and a sandwich cost us around Rs 1,300 with taxes and service charge. They didn't charge for the waffle as we sent it back barely eaten.

Kalyan Karmakar said…
While you don't disclose your name while commenting I disclose it when I do a brand associated activity or have been hosted. We were there last evening too and paid for whatever we had
6 May 2016 at 13:29