A few years back I had gone to a, then newly opened, restaurant in Mumbai's suburb of Bandra called the Pali Village Cafe.

That evening I encountered, what I felt was, very very bad and snooty service. I came home and vented about this on the blog and vowed never to return to the restaurant.

A few years passed by since then and I never did go back to the Pali Village cafe. During the period, I came across people who were fond of the place. Of which, most recently, was my wife who went to Pali Village Cafe a few times. She tole me that she liked it and said that I should go back.

So we finally went to Pali Village Cafe together a few nights back on a special evening.

The service at Pali Village Cafe was pretty acceptable and friendly this time. The wait staff wasn't necessarily the most flamboyant around but were competent and smiling. We reached at 10 pm when a few tables were still occupied. We stayed on till 11 pm, by which time the place became empty, and we had the restaurant to ourselves. This time, they didn't hurry us which was my big grouse last time. I could be snarky and point out that the place is no longer as packed it was then, but as I have realised over time  nothing is to be gained by focussing on the negative. 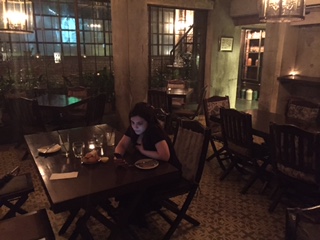 Ambience-wise, the place is dimly lit as you can see from the photographs I took. It fekt a bit warm when we went in as  the aircons were not not fully functional. Things became better later and it was not hot anymore. The furniture gives you a feel of an old Bandra house of a Catholic Goan family. I normally hate it if we are the only people in a restaurant. Didn't seem an issue this time. Possibly because there were people when we entered so I knew it was not a place that was empty. It was pretty noisy then when the tables were occupied. Cosier and quieter later when we were alone. We sat in the inner section. The chairs were comfortable. They have free wi-fi, which most restaurants and cafes that we have been to in Europe have, but rarely does one see in Mumbai.

How was the food? Well, the menu is largely European.


We started with the grilled prawns in parsley and dill. The prawns were grilled quie well. Not over-cooked or hard. Nor was it raw. Just the right amount of juiciness. The flavours of parsley and dill gave it a fair bit of punch and the seasoning was well balanced. The menu mentioned 'micro greens ' but i didn't see any evidence of it unless it was ground into the marinade. Which is a bit strange given that micro greens are normally used during plating to make a dish look pretty. Not that it made a difference.

I was tempted to go for the duck confit in my mains. However, I had just had a brilliant duck confit in Paris. I felt that the one in Mumbai might not, understandably, measure up to my recent Parisian delight. So I played safe and didn't order it at Pali Village.

I went for the penne in porcini creme with truffle salsa instead while K went for the pan seared rawas. We requested for both dishes to be brought to the table together. Doesn't always happen Mumbai but they got it right at PVC. 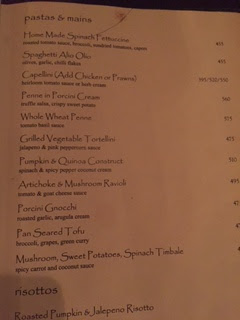 Let me talk about the pasta first.  My order of penne in porcini creme with truffle salsa. What I really liked about the dish was that the sauce was thick and was just enough to be wrapped around the pasta. Mumbai restaurants often offer pasta that's swimming in sauce. I hate that. I was happy to see that they hadn't done so in the Pali Village Cafe.

The seasoning was right but I missed the intensity of flavours which mark a good pasta for me. There were the occasional bites of what tasted like sharp parmesan, which were welcome, but this was not uniformly present through the pasta.

My biggest issue with the pasta was that the tastes of neither the porcini, nor the truffle, was discernible in the pasta!

I have cooked with porcini mushrooms at home. I bought them from Pali Market in Bandra. They are expensive. They have a distinctive taste though. I didn't get that at the Pali Village Cafe.

Nor, was there any taste or aroma of truffles. I have had truffle gelatos in Italy which had a more visible truffle taste.

The pasta at Pali Village Cafe was acceptable but not mind-blowing. Better than what we have had in many other Mumbai restaurants. Just that it was not a 'penne in porcini creme with truffle salsa'.

Read: My recipe for a porcini pasta. Wort the investment in the expensive mushrooms

Let me now talk about the standout item of the night. The pan seared rawas the K had. The dish showed good cheffing acumen. The fish fillet was raised high and plated on a bed of sweet potatoes. This meant that the tomato based sauce didn't drench the fish or make it soggy. The fish was beautifully seared. Crisp on the skin and juicy inside. Flavoured and seasoned well. Combined brilliantly with the sauce and the sweet potatoes. K said that it was probably the best fish dish she has had in a western restaurant.

We skipped dessert but on the way back saw that the Sweetish House Mafia shop at Bandra was open though it was past 11 pm. We went in for the Nutella sea salt cookie that I love and the dark chocolate truffle the K does.

The perfect ending for what was a lovely evening.

"We should do this more often," said K. "Just go to a restaurant which we have not been to in the past. A place where we can have a quiet evening together." 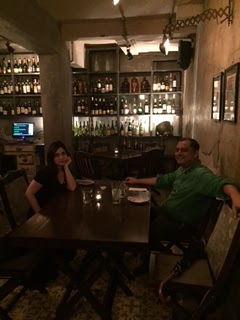 As for me, I am taking back my words about Pali Village Cafe and would be happy to go back if they would have me.

Costs: Around Rs 2,300 for 3 dishes, a fresh lime soda and 2 coconut water. Not bad. The meal was self funded and our visit was un-announced
Bandra Bandra Bites Conti iPhone 6 Mumbai restaurants pasta seafood